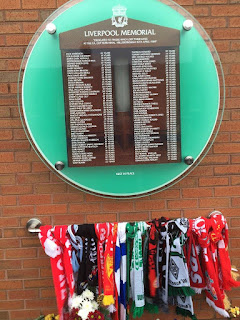 I can't believe it's taken me 51 years to tick-off Anfield (Ground No.76).There was a missed opportunity a couple of seasons ago when Notts County pulled Liverpool out of the hat in the League Cup. I chose not to travel, as the Pies punched above their weight for the one and only time during Chris Kiwomya's ill-feted reign. It took Liverpool 120 minutes to finally see the visitor's off.

It's Boxing Day morning. Christmas Day was of mixed emotions for me. It was the first time my boys and I had not been together on Christmas Day. I met them in the Pear Tree, in Keyworth on Christmas Eve to exchange presents. There was no decent real ale on. I gave DJ Stag the swerve and headed back into town, before enjoying some beers in the Crafty Crow and Roundhouse.

Ms Moon pilots the Land Rover Freelander over towards my old stomping ground, Keyworth. She's singing along to her new 1980s CD that Santa bought her. We drive through 'The Bronx' and up a cul-de-sac. A ruddy-faced man walks down his drive. His bright orange Slazenger polo shirt lights up the gloomy skies. His Sainsbury's carrier bag is orange too. Trumpy Bolton will be on his best behaviour today, as he is accompanied by his wife, Jayne. He's soon swigging out his litre bottle of cider, having already seen off three tins of ale down the hatch for breakfast. He's certainly in the mood for a bit of kissing and canoodling with Mrs B. 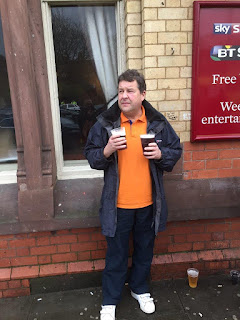 As we breeze down the A50 and up the M6, Trumpy fills us in on his forthcoming 7 day drinking spree in Tunbridge Wells and old London Town, to see the New Year in. We pull into some services at Crewe, so Ms Moon can get her fix of Coffee and a solitary Silk Cut Silver. Trumpy spots a group of Japanese tourists queuing for a McDonalds - Bolton claims they are relatives of the Foxes' Japanese striker Shinji Okazaki.

The counties of Yorkshire and Lancashire are on a state of Red Alert. Many towns are under water. I have watched football, and met so many people in the North of England during my 10 years of groundhopping. I pray to God that they are all safe and okay.

We hit the outskirts of Liverpool in under two hours. Trumpy Bolton has the monk-on as we sail past a Wetherspoons in West Derby. It's £10 to park the car just south of Anfield. Bolton sniffs a pub out up the Anfield Road called the Arkles. He's as light on his feet as 24 year old Leicester winger Riyhad Mahrez as he manoeuvers  his way though a crowded bar to shout up the round to a miserable old bat of a barmaid. The bar has the heat of a blast furnace, as we exit outside, there's a huge cheer as Stoke take the lead against United. 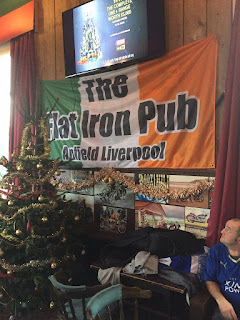 I down a couple of pints of Guinness in the Flat Iron up the road, as Bolton moonstomps to 'Nite Klub.' by The Specials. Ms Moon finds a floating fingernail in her glass of Coke. I leave Ms Moon people-watching as I peg it on a circuit of the ground. Redevelopment of the Main Stand has begun. I pay my respects to the 96 who lost their lives at Hillsborough. I was there that awful day. I also notice a memorial plaque to commemorate the 39 who died at the Heysel Stadium Disaster in 1985.

It's our third visit to the city this year. In the summer we took in Southport v Wigan in a pre-season friendly. A few months ago we watched Cammell Laird batter North West Counties League leaders Colne FC 4-0.

I part with £7.50 for a beefburger, fried onions and a tray of chips. Ms Moon wolfs the scran down, as she hasn't eaten all day. It's £47 for the ticket and £3.50 for an excellent programme. I scan the names of Liverpool's 50 man squad, 15 of them are out on loan. The ground is impressive and packed to the rafters. We're reunited with a nervous Mr and Mrs Bolton.  'The Thinkerman' (Claudio Ranieri), as he is now called, has restored the German, Robert Huth to his back-line. An injury-ravaged Liverpool still have a star-studded midfield. 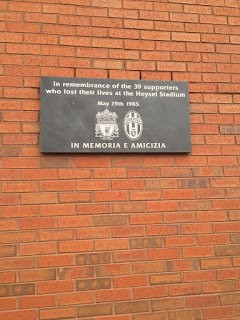 City's 3000 away following have poor banter - they sing 'Feed a Scouser' to the tune of 'Do They Know it's Christmas Time.' It's a sight to behold, as red and white scarves are raised above heads, as Gerry and the Pacemakers is belted out the PA system.

The game is played at a ferocious pace, no quarter is given in the early stages, honours are even. Leicester's stand-out player is the tenacious French midfielder N'Golo Kante. He snaps in the tackle, picks up the seconds and can pick a pass. It's another hat-tip to the City Head of Recruitment for spotting this bargain buy from Caen in the summer.

Wes Morgan and Huth have a cigar on whilst dealing with the lumbering and clumsy Kenyan, Divock Origi. It turns out to be a game-changer when he limps out of the attack on 38 minutes to be replaced by the discarded Belgian, Christian Benteke, who proves to be a bit of a handful. 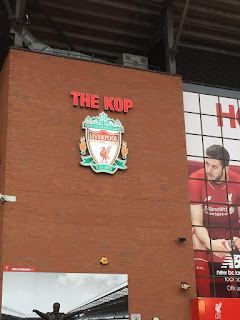 It's deadlock at the break. The Leicester fans are frustrated and over-expectant of their team. Liverpool swarm all over them in the second half. They're passed off the park by Henderson, Lallana and the wonderful Coutinho. The goal duly arrives on the hour after some wonderful build-up play, with Benteke guiding the ball into the bottom corner of the net.

City have nothing left in the tank. They look leggy and listless. The ineffective Vardy is withdrawn from the attack, little improves, although there is a grandstand finish.

Man of the Match: N'Golo Kante

As enjoyable write up as always. This blog is still the market leader in my book. How can anyone match Trumpy Bolton in Liverpool, magic.