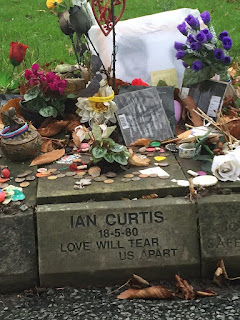 It's Wednesday lunchtime, and I'm driving on a dangerous stretch of road between Leek and Macclesfield. The last time I piloted down here Sven Goran Eriksson and the Munto circus were in town. All the roads were snarled up. I never got a whiff of Macclesfield Cemetery.

Today is different. I drive out of town, and take a right hand turn into the cemetery. His headstone could be positioned anywhere. Time isn't on my side, I've a meeting in Bollington at 2pm. I spot a parking space, and squeeze the 'Rolls Royce' in. Luck is on my side. I literally step out of the car and walk towards the chapel, before I notice flowers and wrapped CDs  placed around the graveside

In the early hours of May 18th 1980, iconic Joy Division lead singer Ian Curtis took his own life in the kitchen of 77 Barton Street, Macclesfield. He was aged just 23 years old, and had the world at his feet. New Order were formed from out of the ashes. If there's two things you can do over Christmas, then watch the film Control and read the book Touching From a Distance by his wife Deborah Curtis. Both ooze class.

I've been at death's door. Influenza has wiped me out good and proper. I drag myself from my sickbed and stupidly decide to take a peek at FA Cup giant-killers Salford City away at Grantham Town. I enjoy some craic with manager Anthony Johnson and star midfielder Scott Burton on Twitter. 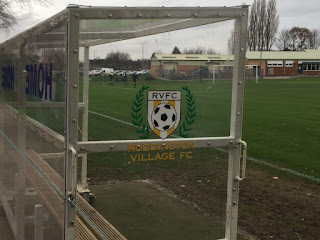 Esteemed blogger, Uwdi Krugg, from the award-winning 'Where's the Teahut?' blog, tipped me the wink on Scotty when he was turning out for Runcorn Town. I viewed him at Parkgate (where Jive Bunny are from) in Rotherham three years ago, in an FA Cup tie, when he ruled the roost. He'd been plucked from the obscurity of Bolton Sunday League pub football. I passed on my recommendation to the Chief Scout at Notts County. The irony of him winning the BBC Man of the Match award a few weeks back when Salford dumped the Pies out of the FA Cup brought a satisfactory smile to my face.

It's Saturday morning. Ms Moon is having a pre-Christmas spring clean. I decide to stretch my legs. I walk past Nottingham Racecourse, along Daleside Road. Meadow Lane is heaving with folk, as they rock up for the weekly auctions that take place at the Cattle Market. I hang a left onto London Road towards Trent Bridge. Burgeoning brewery Castle Rock  have taken over operations at The Embankment, which was the old Boots Social Club, back in the day.

I push the doors open to the Nottingham Forest Club Shop. Rumours are rife about lack of stock and cash flow problems. I find this to the contrary. Sticky jnr will be enjoying their merchandise on Christmas Day morning. 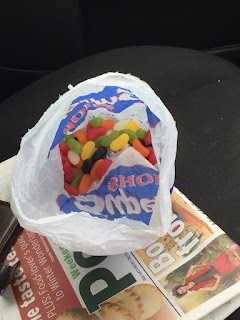 I grab a Americano at Costa on Bridgford Road, at the heart of Bread 'n Lard Island, despite 'Rupert', 'Sebastian' and 'Tarquin' doing their best to spoil the occasion. West Bridgford FC looked to have wrapped up the NSL title  before Christmas, but are now 'choking it.' Two home losses on the spin have brought the Big Time Charlie's down to earth - although one or two have left for pastures new in the revolving world of the NSL.

I've 15 bin bags of clothes and clutter to drop off at the Rushcliffe Recycling Centre before heading off to Ruddington. The olde worldy High Street in the village is closed off to cars due to a Christmas Market. I park outside the Co-op, a place I've frequented most lunchtimes over the last 10 years. Tony Blackburn is playing 'Magic' by Pilot. It sold over a million copies in the USA back in 1975. It's a song the Leicester City fans used to sing about Argentinian midfielder Estebian Cambiasso

They have the best sweet shop in the world next to the chippy on Church Street. I gaze at the jars on the back shelves, as saliva dribbles from the corner of my mouth during an unexpected sugar rush. I snap up a bag of jelly beans for £1. 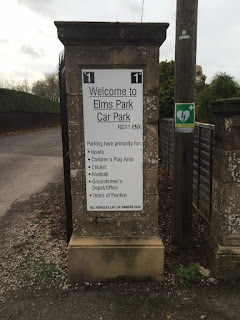 Clifton management duo of 'Tosh' and Steve will be discussing tactics over a two course pre-match lunch at Gino's Ristorante. It'll be prawn cocktail saturated in rose marie sauce, two rare sirloin steaks and a carafe of Chianti. Not many are dining at the White Horse just down the road. It was my favourite pub, before a fall-out with the miserable landlord. You know what they say readers - blood's thicker than water.

I park up adjacent to Rushcliffe Country Park. I've somehow worked for three different companies in the space of 18 months on this estate. I head up a snicket into some woodland, before entering a clearing where Ruddington Colts are playing football. Further along the footpath Ruddington Village adults are warming up.

I bump into an old school friend John Featherstone, who has Ruddington connections. I notice in the far corner that part of a tree has fallen victim to 'Hurricane Desmond.' 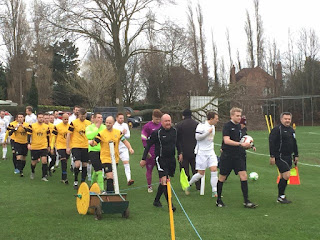 All Whites are pumped up for this one. I've received team news by text. They are strong all over the park. Ruddington are on fire, and top of the pile in the NSL. Local bragging rights are at stake. Clifton gaffer James Turner drinks in most of the watering holes in the village.

Ruddington take the lead on 5 minutes, following an omnishambles in Clifton's defence. Goals from Thompson and Richardson put the visitors 2-1 up. The Chalky Whites have rolled up. They're massive Pies fans, and should have been watching County play Hartlepools today. But they waved the white handkerchief up in Salford on a wet and windy night a few Friday's ago.

Barthez has also rocked up from his mansion at Ruddington Grange Golf Club. We get gassing to Clifton skipper 'Tank' who is miffed to be on the bench today, after attending a wedding last week. Tosh is milling around the tea bar at the break. He's usually up for a cup of Bovril, accompanied by a pot of pepper. 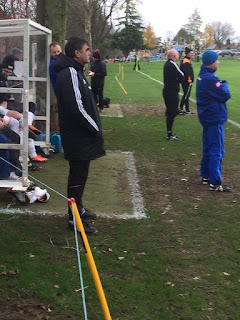 Steve Hardie, the Clifton assistant manager, is parading around in his QPR tracksuit. I guess it's a present from local boy done good, Jermaine Jenas. Steve quibbles every throw-in and offside. You could never dampen the man's enthusiam or passion for the game. Each goal is greeted with a Mourinho sprint down the touchline. I love his usual attire, a long grey knee-length coat. He looks like a pallbearer.

Ruddington are hungrier in the early stages of the second half, and restore parity. The goal of the game comes from Thomas who cuts inside from the right, before leathering a left foot shot into the roof of the net. Hardy appears to put the game to bed for Clifton with 10 minutes remaining. The Rudd 7 jacket scores a pearler with 8 minutes to go, before the young, stressed referee calls time with darkness descending.

What an advert for the game. Only a few bookings, and a beautiful game of football played in a good spirit and difficult conditions.

Man of the Match: Connor Hardy
Posted by Sticky at 6:51 PM