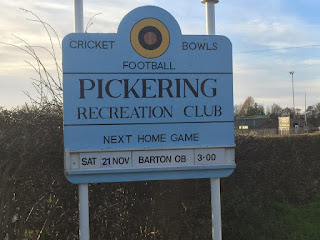 It's Wednesday evening, and I'm stood next to Keyworth United Chairman Rob Clegg, at the coldest place on this planet. It's called Platt Lane, and is open to all the elements. There's a swirling wind and it's pelting it down with rain. Holbrook St Michaels from Derbyshire are the visitors in tonight's Central Midlands League fixture.

An old guy walks by, chuntering and moaning about the blustery conditions. He has a northern accent. I'm flabbergasted to hear he's a groundhopper who has travelled down here on the train and bus from Preston in Lancashire to take in the game. He's staying overnight in the village at a bed and breakfast. I give him the swerve at the end of the game, as the match has finished 0-0.

The highlight of the week was when we went to Nottingham Broadway Cinema to see Alan Bennett's The Lady in the Van, starring Dame Maggie Smith. I celebrate the end of the working week with a couple of pints of Harvest Pale Ale at the Bear and Lace (previously Chambers) on Maid Marian way in Nottingham city centre. I constantly scroll around on the BBC Weather app. The outlook looks depressing oop North. 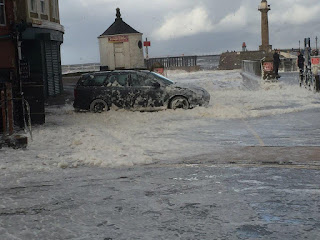 We're on the road to Whitby at 8:00am. Murphy Palmer, my canary and green budgie, is going to be kicking off. I've left Radio 2 on for him. Sara Cox's 80s show is on this evening - we both can't abide her. I leave him pecking away at a millet spray, as we abandon him for the weekend.

Marske United and Guisborough Town have already bit the dust. All our hopes are hanging on the ancient market town of Pickering. The North Yorkshire Moors has succumbed to snow. Cars are wheel spinning their way up the steep gradients, as they fight the extreme weather.  A Subaru has taken a corner too quickly and smashed into the barrier.

We finally roll up at the Met apartments on Whitby's West Cliff. The road is shut. A Force 10 gale has seen a 100 year old Victorian shelter topple over. Its remains are strewn all over the road. A stranded motorist's car fights with the high tide, as the waves crash into the harbour wall. 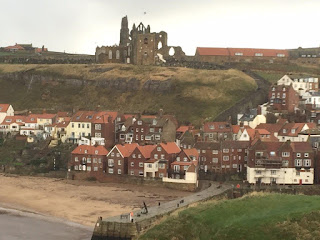 Whitby Town's Turnbull Ground backs onto the flat. I'm saving that for a rainy day. The flat is owned by my late father's solicitor. My spine tingles when I see all my Dad's books lined-up on a shelf in the lounge.

We are blown all the way down to the harbour. We gratefully trudge up the steps into the warmth of the Magpie Cafe, where we tuck into Haddock, chips and mushy peas accompanied with a piping hot mug of tea. A couple of Japanese tourists on the next table are scoffing a cream tea at the same time as mussels, crab and salmon. It's like a Japanese game show that Clive James used to show on ITV.

I snap up a beanie hat in a half price sale at Tog 24 on Church Street. I hang my nose over a nice olive green coat, with a bit of fur on it. It'll have the women of Grantham in all of a lather when it gets its first outing for the visit of FA Cup giant-killers Salford City next week. 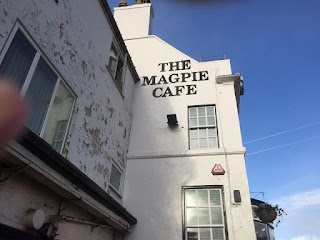 Pickering Town are tweeting that they are enjoying uninterrupted sunshine with little wind. We drive back over those bloody Moors again. I bet that bone idle so-and-so Ventriss and his pals PC Rowan and Inspector Blaketon from Heartbeat are putting in a shift today.

Ms Moon parks the Land Rover adjacent to the cricket pitch, where Barton Town OB are warming up. She needs to slap some make-up on. With it being half an hour before kick off, will she have enough time ? I wisely choose not to comment.

It's £5 on the gate, with £1.50 for a programme, which is right up there with Tony Squires's masterpiece at Heanor Town. It's clearly a labour of love. We get gassing to some friendly folk in the stand before seeking the warmth and shelter of the clubhouse, as it's bitterly cold. Ms Moon shouts up a couple of steaming hot drinks from the Pikes Pantry. I flick through the programme, where I notice that former Blackburn, D***y and Notts County defender Craig Short is the President of Pickering Town. His brother Chris wasn't a bad player either. Neil Warnock bought them both for a song when at Scarborough Town and the Pies. 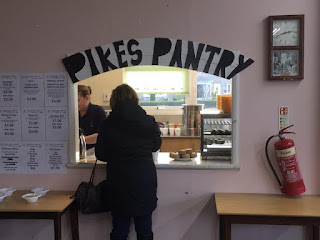 I glance up at the TV screen. Bristol City manager Steve Cotterill is explaining away at more dropped points. A poster on the Gents toilets is advertising an Elton John and Billy Joel tribute act to held at the club in the next few weeks.

We position ourselves next to the Barton Town dugout. There's that many folk shoehorned into it, that it resembles the film set from Lock, Stock and Two Smoking Barrels. I viewed Barton the last Good Friday. I was particularly impressed with how their forward Scott Phillips led the line that day. Sadly, he has a long-term injury.

The referee is subjected to a torrent of foul-mouthed abuse from a member of the Barton coaching staff. I'm surprised stronger action isn't taken, with the referees' assessor scribbling away into his notebook in the stand. Manager Dave Anderson chews gum more furiously than Big Sam or King Billy Davies. 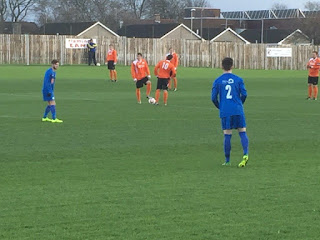 The Pikes take the lead on 7 minutes. The visiting 'keeper can only parry a long-range shot from Joe Danby, the rebound is pounced upon by Ryan Cooper, who tucks the ball away into net. Barton equalise on 35 minutes with a cool finish from Ashley Lattimore.

I check the latest scores at the break. Lincoln City are coasting down on the English Riveria. Top Valley goal machine Liam Hearn has bagged again. All the talk is of Jamie Vardy's goal at St James' Park, in Newcastle.

Pickering score a wonderful goal just before the hour. A free kick whipped in from the left is met with a bullet header by centre half Ryan Turnbull. A lunging challenge and retaliation results in an early bath for Pickering's Ward and Barton's Belcher, as the players keep the assessor busy.

I enjoy a post-match pint of Yorkshire Blonde at the Station across the road from the harbour in Whitby. A local in the boozer, who suffers from insomnia, tells me that he heard the shipping forecast in the middle of the night. He said it was the first time he can remember a Force 10 gale being forecast for Whitby. I can't arf pick em.

Man of the Match: Matty Turnbull
Posted by Sticky at 6:54 PM