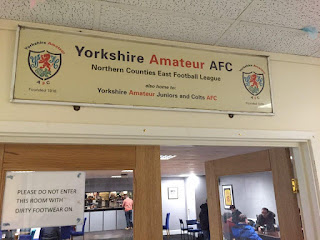 I pick up the 'Rolls' from Rammers's stately home, and drive over to Morrisons in Gamston. I've got to pick up some guacamole and sour cream for the chilli con carne I'm preparing for supper. Four cans of Grolsch are £4.48 - they have been for six months now. It's about time they were on special bloody offer. I'll be tweeting them later to have a moan about that.

Sunday is spent in town, mooching about the place for Christmas presents. I've had to take on more responsibility this year. I snuck into the 'King Billy' on the way home, and sample some of the fine Oakham Ales they have as guest beers this week. I knock up the St Andrews blog, as Steve McClaren's Newcastle United complete a remarkable comeback against a sloppy-looking Spurs, having looked dead in the water at half time.

I notice on Monday lunchtime, on the FA website, that Leicester Nirvana have been drawn away in the final 32 of the FA Vase against hot favourites Hereford FC. We might stop the night in Malvern, and chalk a few pubs off from the Good Pub Guide. 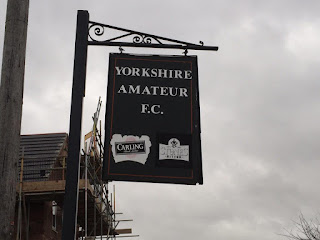 I'm on the road in Suffolk for two days during the week on business. I stay in a Premier Inn that is situated adjacent to the marina in Ipswich. Portman Road is close by. I need to tick-off this ground. Sadly, tonight they are away at Craven Cottage in London.

I'm up early doors, by my lazy standards of late, on Saturday morning. Ms Moon is putting in another 12 hour shift. Murphy the budgie is blowing his whistle more loudly than Premiership referee Martin Atkinson to 'The Sound of Silence.' by Simon and Garfunkel. I'll leave the window open for the little fella, as he's flying up the M6 shortly to watch his beloved Norwich City get a tonking at Old Trafford.

I've arranged to stay over at 'our Mark's' up in York. The nearest ground to his house, in the village of Upper Poppleton, which I haven't been to, is Yorkshire Amateur, in the Bracken Edge area of Leeds. I drive down to Newark, and join the A1 at South Muskham. Graham Norton is getting on my wick. I'm desperate for a new car, complete with DAB radio. In the meantime I settle for a game of 'Radio Bingo.' 'Respectable' by Mel and Kim is on Radio Sheffield. I remember them selling out Ritzy in Nottingham back in 1987. Allegedly, Mel and Kim mimed the whole gig - Milli Vanilli style. Mel Appleby tragically died at the age of 23 from cancer.' 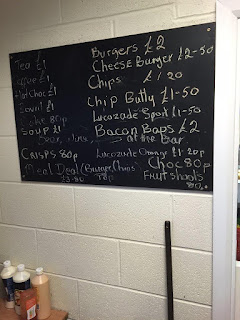 Merry Christmas Everyone' by Cardiff's finest, Shakin' Stevens lifts my spirits, as I pull off the A1 onto the A64. I have difficulty wiggling my hips though, as the steering wheel is a major obstruction.

My brother is wrapping some Christmas lights around a tree in the garden as I pitch up outside his crib. We exchange chit-chat over a ham and cheese baguette, kindly made by my sister-in-law, before jumping into his car, and heading out on the A64 towards Leeds. We have York City v Morecambe as back-up, if Yorkshire Amateur are watered off.

We pass a field where the 'Leeds Festival' takes place each August. 'Our Joe' usually gets spangled up here every year. He'll be living in 'Dirty Leeds' soon, if he gets his grades, as he has had an offer from the University of Leeds. 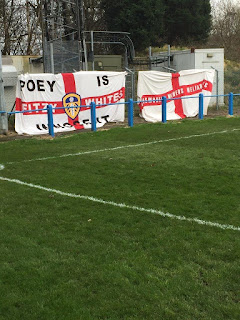 The ground backs onto a building site. I later discover that the Club sold some land to the rear of the nearest goal, where some new houses are now being built. My favourite dog-shit coloured shoes are now caked in mud, which is splattered all over the entrance.

It's £5 on the gate and £1 for a programme. Yorkshire Amateur were founded in 1918, and have played at Bracken Edge for over 93 years. Former Sheffield United and Leeds United striker Brian Deane began his career at the club.

I poke my head into the clubhouse. There are many framed football shirts of ex Premiership players adorned to the wall. Horse-racing is on the wide screen TV. We grab a Yorkshire Tea as we make our customary circuit of a new ground. The changing rooms and a stand in disrepair with blue, brown and pink seats are on the nearside touchline. A steep grass bank dominates the far goal, with standing on the far side and houses behind the nearest goal. 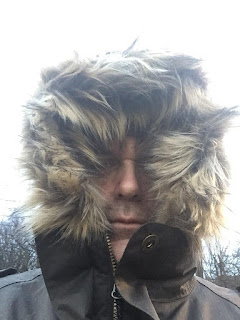 We bump into a committee member and former referee. He tells me an amusing anecdote about Brian Clough. In the 1960s Cloughie brought down a Sunderland youth team side to play in West Yorkshire. My man, Geoff, had the honour of officiating the game. As he was getting changed after, there was a knock at the door, and in walked Clough. "Can I just say young man, that'll be the first and last time you ever referee one of my games." Geoff was still chuckling now, as he retold the story for probably the umpteenth time.

I notice a couple of flags fluttering in the breeze. 'Poey is Innocent', says one. Apparently, it's a reference to an 'innocent miner' being jailed during the Miners' Strike, after an incident in Fitzwilliam, a village where Geoff Boycott was born. Ironically, there's no minute's silence for Kellingley Colliery that became the last deep coal mine in England to close yesterday.

League leaders Hemsworth MW start the game slowly. The 'Ammers' begin brightly. The highlight of the first 20 minutes is when Sticky Palms gets his mucky mitts on the matchball. The pivotal moment of the game happens in the 35th minute. 'The Ammers' striker is wiped out when through on goal. The official waves play on. Hemsworth's Shane Kelsey threads a ball through to Bill Law who has made a diagonal run, he thumps a shot under the 'keeper and into the net. Just as the home team are about to kick off, their 6 jacket is shown a straight red card for something he has said. 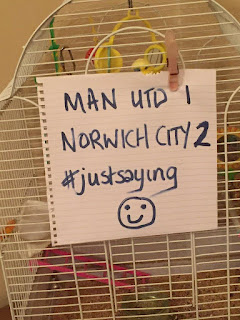 I check the scores at the break. Murphy will be singing at the top of his voice in the away end at Old Trafford. The hood on my bargain-buy coat, snapped up in a sale at Tug 24 in Whitby, gets an outing, as driving rain sweeps in. The visitors push on in the second half. Left winger Shane Kelsey is a cut above. I saw the boy at Shaw Lane last season. He has equal ability with either foot. He fluffs a chance. His Dad remarks that it will mean "a slice off his Sunday roast tomorrow." Kelsey scores a beauty, with a shot that loops over the 'keeper into the roof of the net.

4-1 is unjust on Yorkshire Amateur. They have spurned chances of their own, and have played the best part of an hour with 10 men. The day gets better with a visit to The Maltings in York city centre - it's Yorkshire Pub of the Year 2015. I can't arf pick em.

Man of the Match: Yorkshire Amateur 'keeper.
Posted by Sticky at 5:04 PM