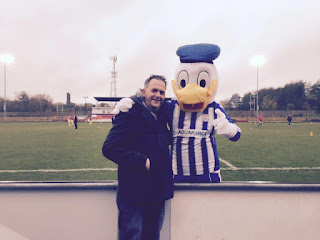 We're walking around the perimeter of Nottingham Racecourse late on Sunday afternoon. It's drizzling with rain, and close to darkness. I'm reflecting on a cracking weekend. A few beverages were downed last night in Canning Circus with 'The Zuffler.' What is at the forefront of my mind, though, is how sporting the Heanor Town supporters were in clapping off a victorious Sporting Khalsa yesterday. In 10 years of groundhopping, it's right up there with moments that have touched me on my journeys around England watching Non League football.

The inclement weather puts paid to any midweek football action. Table-topping Clifton All Whites U19s have a two week break. I notice that Dunkirk FC's twitter account are having some beef with the Mighty All-Whites. Dunkirk were recently beaten 2-0 in the FA Youth Cup by Basford United, who one or two of the Clifton boys play for. Maybe its sour grapes, as on Tuesday evening Basford travelled up to League Two Accrington Stanley in the first round proper.

I meet up with Sticky jnr and The Skipper at the Rancliffe Arms in Bunny for a Monday night carvery. Sticky jnr is salivating over the choice of meats as the chef slices into a huge joint of roast beef. It's good to see my lads. I really miss them. 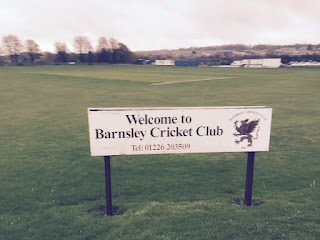 It's Friday evening, and I'm hurtling down the country lanes of the Vale of Belvoir towards Harby. I pick up the 'Mayor of London' and take him out for a meal at the Nags Head in the village. The treat is on me, as he was there for me in my hour of need.

We're polishing off a bottle of Bordeaux a few hours later at his Southfork Ranch, pissing ourselves at Alan Partridge on Dave, when I'm alerted to breaking news on social networks of acts of terrorism in Paris. We stay riveted to the BBC news channel as the events and shocking images unfold.

I don't sleep well. I think about those poor, innocent people and their families caught up in the bloodshed. I swing into Morrisons at Gamston and collect my suit, as I need it for a two day conference in Birmingham next week. I wolf down a full English, as I'm on the sauce with blog legend Trumpy Bolton today. 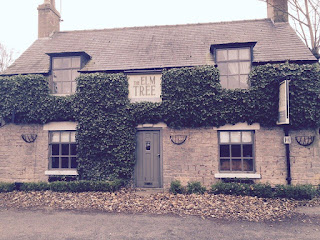 Bolton has just polished off some crumpets and cheese, accompanied with a bottle of Brakespear's Gold, as I knock on his front door, it's 9:45am.  Graham Norton kicks off with 'Sometimes' by Erasure, as we head towards to town - I immediately turn it off before Trumpy blows a gasket.

The last time I heard from the great man was a few weeks ago at 10:30pm on a Saturday evening, when he phoned me from his Southampton hotel room to tell me after a 12 hour bender that 'Jamie Vardy was having a party.'

Ms Moon is piloting today. Trumpy is introduced to her. As ever, he is the perfect gentleman. He makes a beeline towards Murphy the budgie. They whistle to one another and talk some waffle. We head up towards Junction 29 of the M1. Bolsover Castle is sat on top of a hill in the distance. I'm toing and froing on where to go today. Shaw Lane's FA Trophy game was the original choice, but it's high up in Barnsley, and exposed to the weather. Curzon Ashton, FC United of Manchester and Stockport County act as back up, with Lancashire expecting a battering according to those muppets at the Met Office. 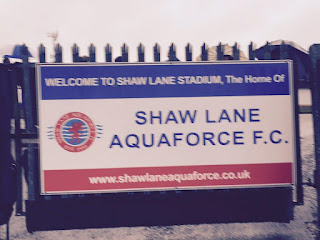 I'm held accountable for us taking a wrong turning, despite clear instructions from the Garmin. Trumpy nicknames me Sat Nav. We pull into the car park of the Elm Tree in Elmton, just south of Clowne. Trumpy downs a couple of Robinson's Dizzy Blondes. Shaw Lane and Matlock fans will be astounded to hear that Trumpy Bolton's sole mission in life is to try and drink in one pub in every town and village in England, Wales and Scotland. He has pursued this hobby for over 35 years. He has a dog-eared old atlas with all place names highlighted off. I've asked him to leave it to me in his will.

I've had the thumbs up from Shaw Lane on twitter, the game is confirmed as on. It will save a trip up to Manchester. I clock a boozer in the Good Pub Guide on the outskirts of Barnsley, close to the Trans Pennine Trail. The Strafford Arms is a pretty stone built pub, with a roaring log fire. We plump for Farmer's Blonde with some rump steak and beef sandwiches. Shalamar's 'I Can Make You Feel Good' is on the jukebox.

We're soon turning into Shaw Lane. The Club were only formed in 2012, and have had a meteoric rise up the Non League Pyramid. I notice a van parked up with Aquaforce Plumbing Services emblazoned on it. I saw Shaw Lane put a shift in at Walsall Wood on their FA Vase run last season. Notable people from Barnsley include: Michael Parkinson, Dickie Bird, Seth Armstrong and a boat load of footballers including John Stones and Mick McCarthy. 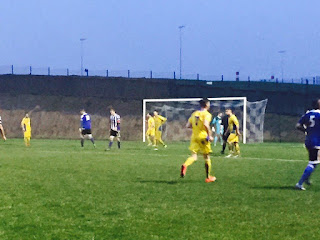 Trumpy pays us in on the gate at £5 per pop. The programme is a cracker for £1. He is cringing a few moments later, ducking behind his programme, when Sticky Palms has his photo taken with the Duck mascot. The Rolling Stones are on the PA system, 'Paint it Black' is the song of the day.

Bolton is soon tucking into a few cans of Strongbow dark fruit cider. Ms Moon and I opt for a Nescafe coffee. The bar, set up on trestle tables, is doing a roaring trade in pasties and sausage rolls. The Gladiators of Matlock have brought a large following with them. The players emerge from the dressing room to 'Let's Go' by  Calvin Harris.

An impeccable one minutes silence is held in driving rain, beneath slate-grey skies. for the victims of the atrocities in Paris last night. The first half is bloody awful. Both sides persist in long range passing on a squelching surface. Neither 'keeper is tested in the dullest half I've seen in ages, as Bolton begins his shuttle run to and from the bar. Shaw Lane's captain is former Nottingham Forest and Hibernian midfielder Matt Thornhill. He played over 30 times for the Reds, but somehow finds himself playing at this level at the age of 27 years old. 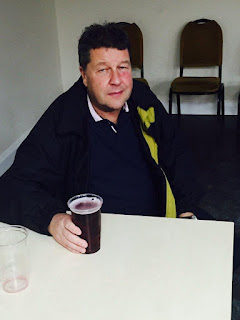 I'm moody and morose at the break, this game has 0-0 written all over it. Sticky P doesn't do 0-0s. I've not seen one in four years. Ms Moon and Trumpy Bolton taunt me that I'll be walking home if the game ends goalless. Trumpy confides to Ms Moon and I that he once had the hots for Rita Fairclough, back in the day in Coronation Street.

The second half is a classic, as both teams up their game. Matlock have clearly had a rollicking in the changing room. They score a beautifully executed goal through the game's best player Nicky Travis, who has been immense in the Gladiator's engine room.

Shaw Lane rattle the woodwork, before Steven Istead smashes home an equaliser. Trumpy is boogying with the 'Shaw Lane Baby Squad' to the Real Thing's 'Can You Feel the Force' as the PA guy ups the ante. Back come Matlock. Skipper, Danny Holland restores their lead on the hour. There has been a goal blitz, three in eight minutes to be precise. There's no sign of Bolton. He's necking his fifth tin of cider in the warmth of the clubhouse. Trumpy is wobbling a bit now. He claims to have spotted Jeremy Corbyn amongst the crowd of over 200.

Matlock rattle the upright, before the referee finally calls time. There is a sense of relief from the visitors.

Man of the Match: Nicky Travis
Posted by Sticky at 6:00 PM