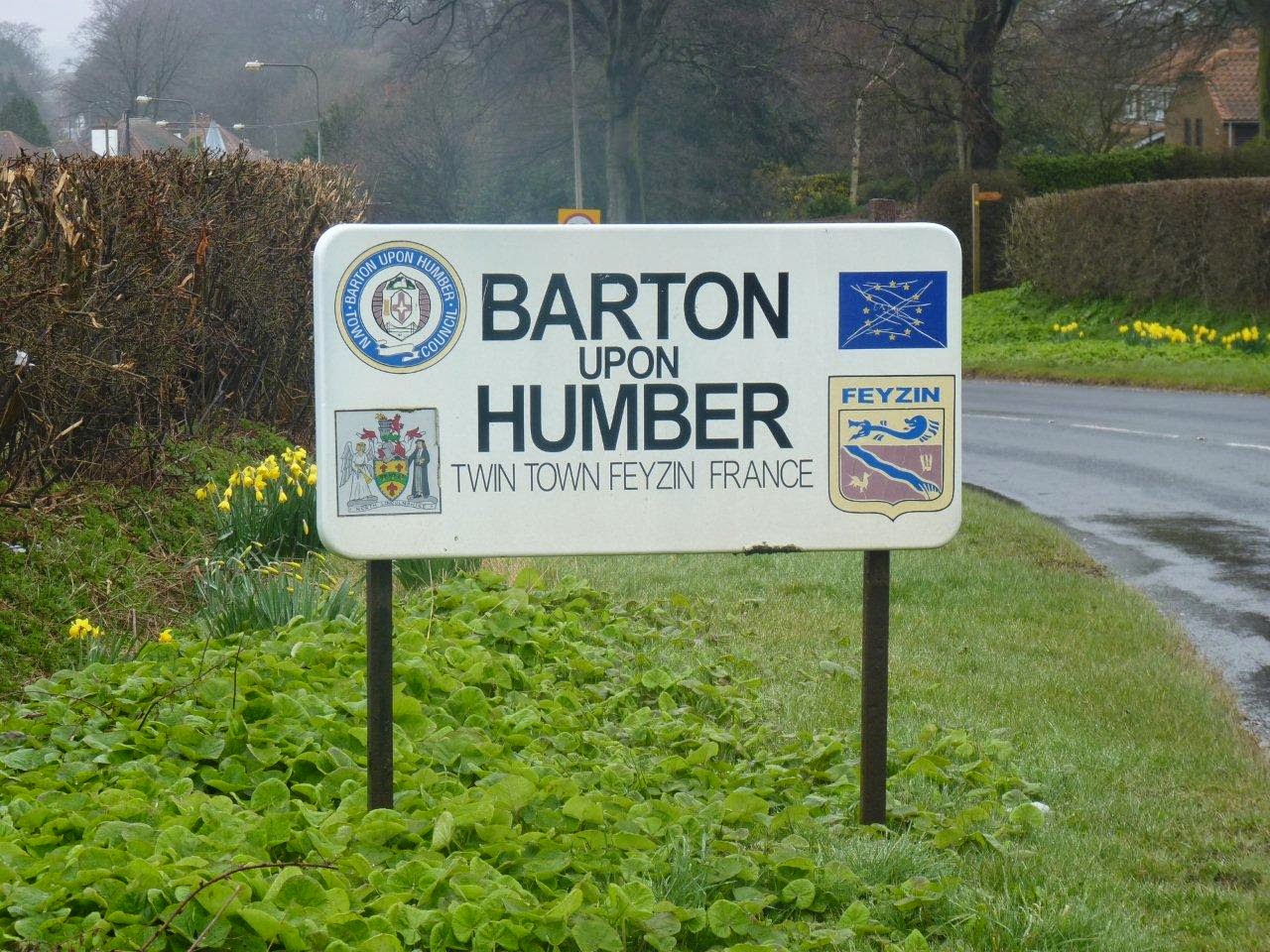 I've been losing interest in professional football for sometime now. As a kid I used to be obsessed with the job lot. Back in the day I'd get my father, who was a journalist with the Daily Mirror, to ring up the Sports Desk late at night on a Wednesday evening to find out the Lincoln City's final score, otherwise you wouldn't have found out until the morning papers arrived the next day.

Today the media is saturated with football coverage. There are dedicated sports channels and radio stations. It's took away all the enjoyment for me with its over analysis and waffle of the pundits. It's still a lifetime ambition to visit and see a game on all 92 grounds. I'd planned to visit ground No.76 on Good Friday, for the clash of two Lancashire clubs: Morecambe and Accrington Stanley. Blog legend Trumpy Bolton had agreed to accompany me.

It's Wednesday evening and I'm at my wits end. Not only is another episode of the ghastly Midsomer Murders on ITV, but it's also bucketing down with rain in the north west of the country. I punch out 'T' for Trumpy on my mobile. I express  concern over a potential 300 mile round trip to Morecambe to see a game that might be hosed off. A sober Bolton (he doesn't touch a drop on a school night) asks about an alternative venue. "How about Barton Town v Cleethorpes Town near the Humber Bridge, Wetherspoons at Brigg serve ale after 09:00am?" 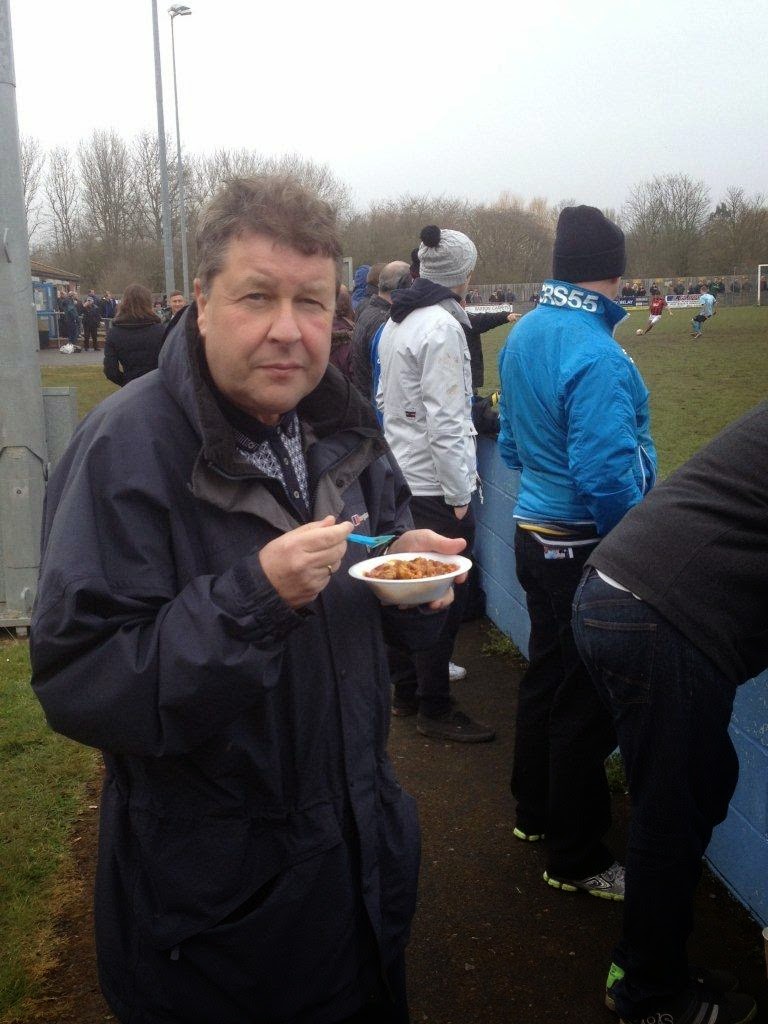 A bleary-eyed Bolton trudges down his drive at 07:45am, as Sticky performs a three point turn from out the Reginald Molehusband manual (one for the older generation). He's got his litre of cider securely stashed in a Disney Store plastic bag. Mrs Trumpy must have bought their granddaughter a cuddly toy from the store. Trumpy calls her Elsie Mo after the award-winning pale ale from the Castle Rock Brewery in Nottingham.

He takes a huge slurp of cider to wash down the toasted teacake he chewed on for breakfast. Murphy's hero, Alan Dedicoat, hasn't even read out the 8 o'clock news on Radio 2 yet. He salutes the soon to be opened Pear Tree in our village. We both have a good old groan and moan as Arsenal supporting self-promoting northerner Sara Cox's annoying dulcet tones are heard across the airwaves, accompanied by some wretched Christina Aguileri song.

Bolton is all set for two nights in Chepstow over the weekend, as he continues his quest to make a financial transaction in every village, town and city in England, Wales and Scotland - I kid you not. 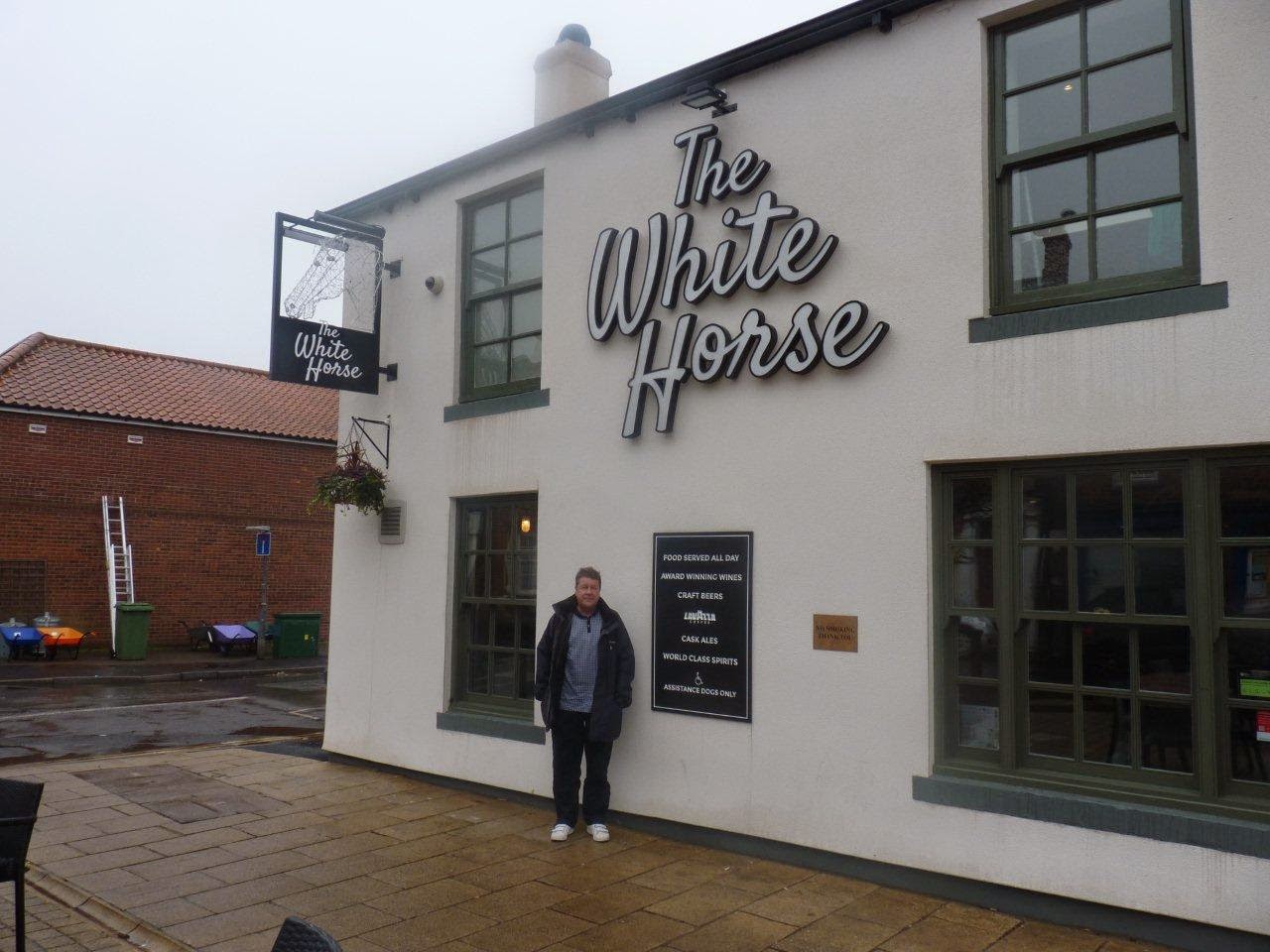 We both have a laugh over the deluge of rain at Bury last Saturday which made Southend United manager Phil Brown's fake tan run - sorry Shrimper fans if you made the trip. Trumpy says he won't miss sacked Notts County manager Shaun Derry, with his V-neck jumpers, shirt, tie and ridiculously tight trousers.

We hit the market town of Brigg at just gone 9:00am. The White Horse, a Wetherspoons establishment, has only been open a few months. "Bloody hell, it's a bit quiet in here love", remarks an already booze-fuelled Bolton. "It's only 9 o'clock darling, wait until midday, it'll be bumper to bumper" quips the blonde barmaid.

The legend treats me to a full English and an Americano. He plays around with his bacon cob, whilst potting a pint of Ruddles ale and a cider. We're soon parked up on a grass verge on the edge of Barton upon-Humber staring out towards the Humber Estuary and the Humber Bridge shrouded in mist. 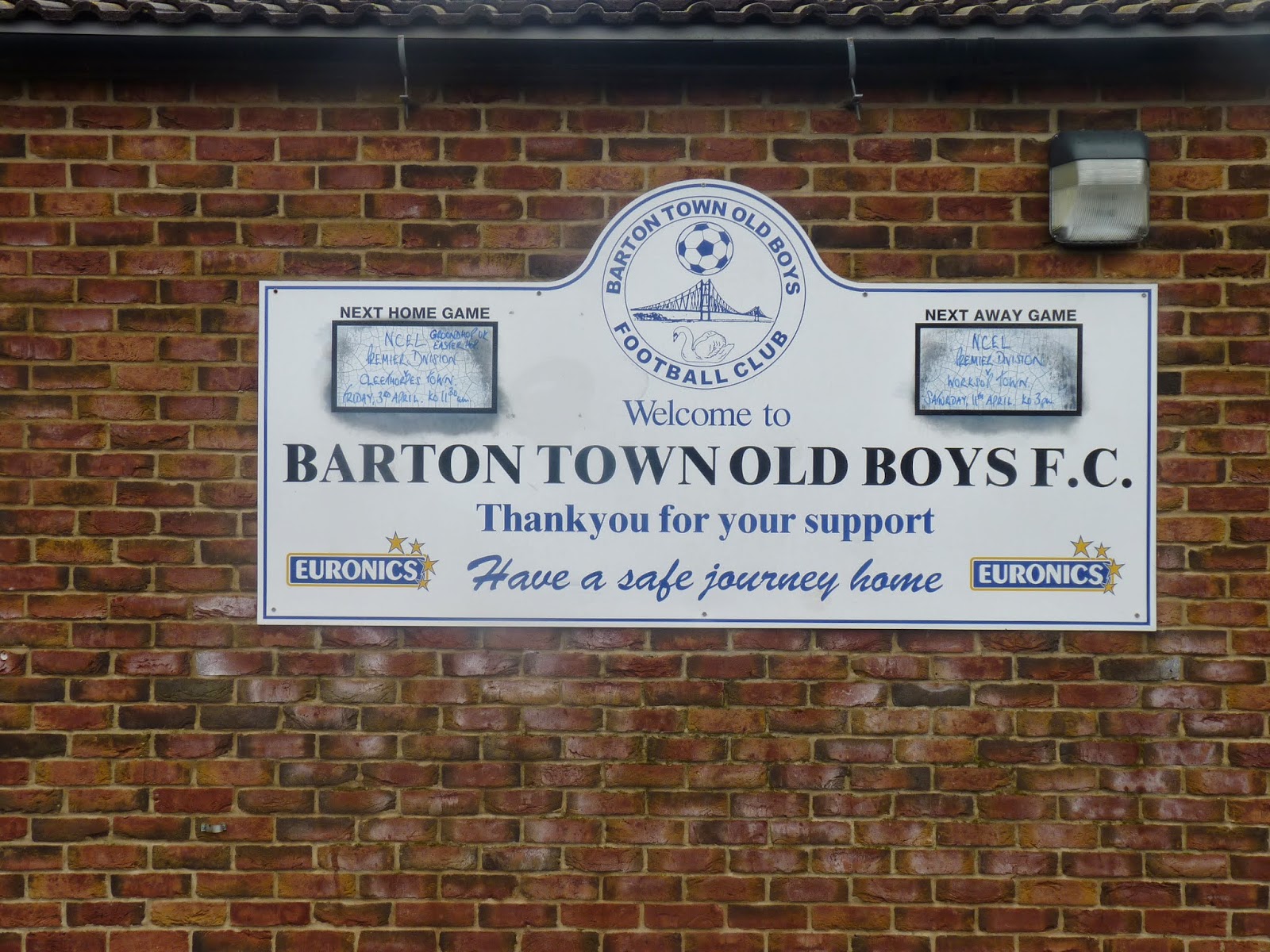 The annoying Zoe Ball is hosting Pop Master on Radio 2. After an even first round, Bolton finds a second gear and gives Sticky a thorough going over. Hoards of Hoppers are heading out this way, as it is Day Two of the NCEL Groundhop. I take the executive decision to street park away from the ground to avoid being blocked in. It looks like the 'Groundhop Tour Bus' has managed to achieve this, as cars try to squeeze by in an attempt to park in the ground.

Barton upon Humber is a town in North Lincolnshire with a population just shy of 10,000. Isaac Pitman, the inventor of shorthand hand writing was once a Master at the Free Charity School in the town. 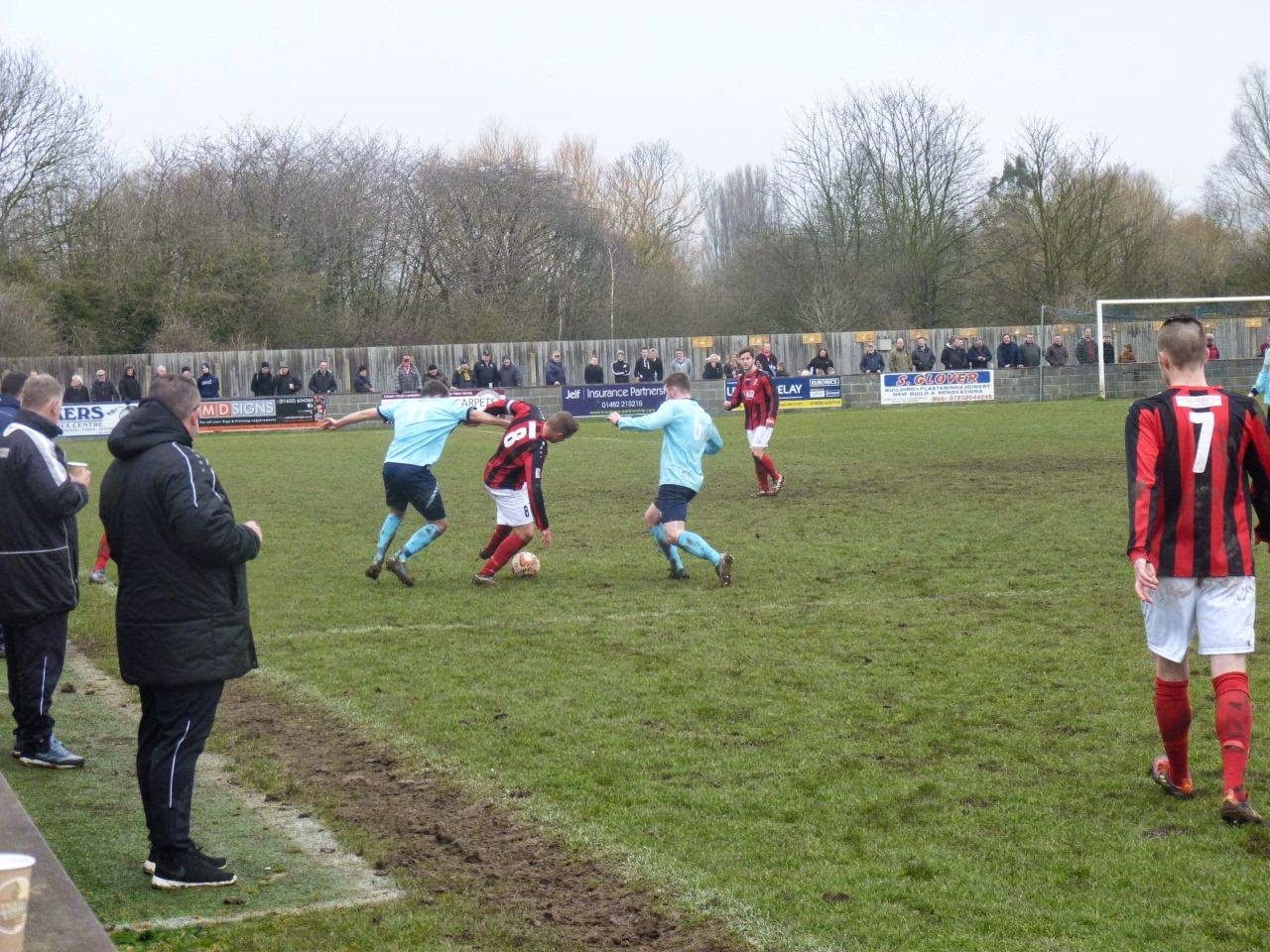 It's £5 on the gate and £1.50 for a bumper programme. The conditions are overcast. There are puddles of standing water on the nearest touchline. The pitch is already cutting up badly. The place is mobbed with Hoppers from all over the country. Trumpy emerges from the bar with another pint of bitter as I get gassing to a chap from Harlow.

I clock clean-shaven Cleethorpes manager Marcus Newell. He looks less scary than he did at Wisbech Town earlier in the season, when he sported a beard and looked like he burst a blood vessel in his neck when they exited the FA Vase. He chews gum more furiously than Wee Billy Davies and Sam Allardyce put together.

Cleethorpes take a battering for the first 40 minutes as Old Boys football them off the park. 9 Jacket, Scott Phillips, is too hot to handle. His touch is majestic, headers are cushioned, not a ball is wasted, unlike the chances that his side spurn, in a one sided first half. When a chance comes their way, the Owls of Cleethorpe take advantage. Brody Robertson curls a 20 yard shot into the bottom corner of the onion bag to give the visitors an undeserved lead. 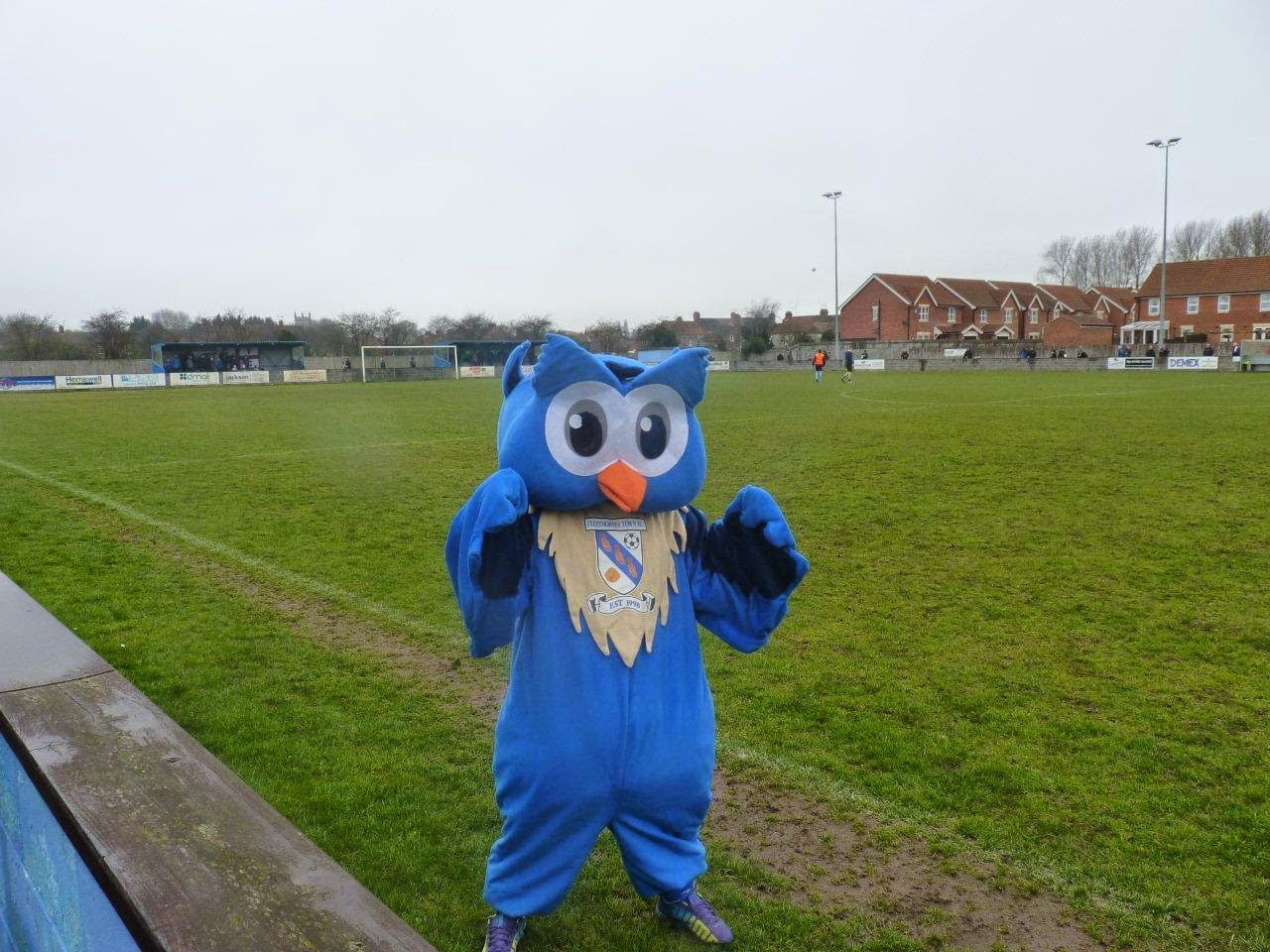 The guy next to me is a proper hopper. He has a stopwatch and jots down the time of the goal and who the scorer is in his notebook. He's visited over a 1000 grounds and tries to watch 5 games a week. Trumpy nearly chokes on his second homemade chicken curry when the guy mentions his missus is driving up from Essex to spend the night with him in a hotel in Wakefield.

Old Boys have lost their best player in Phillips, who has picked up a hamstring injury. Cleethorpes finish the game off with two late strikes, the first of which sees the whole team pile onto the Owl mascot, who has his head ripped off during the raucous celebrations.

There's still time for the legend and I to visit four more pubs, including the delightful Dam Busters, in Scampton near Lincoln, with all it's fantastic RAF war memorabilia.

Man of the Match: Trumpy Bolton