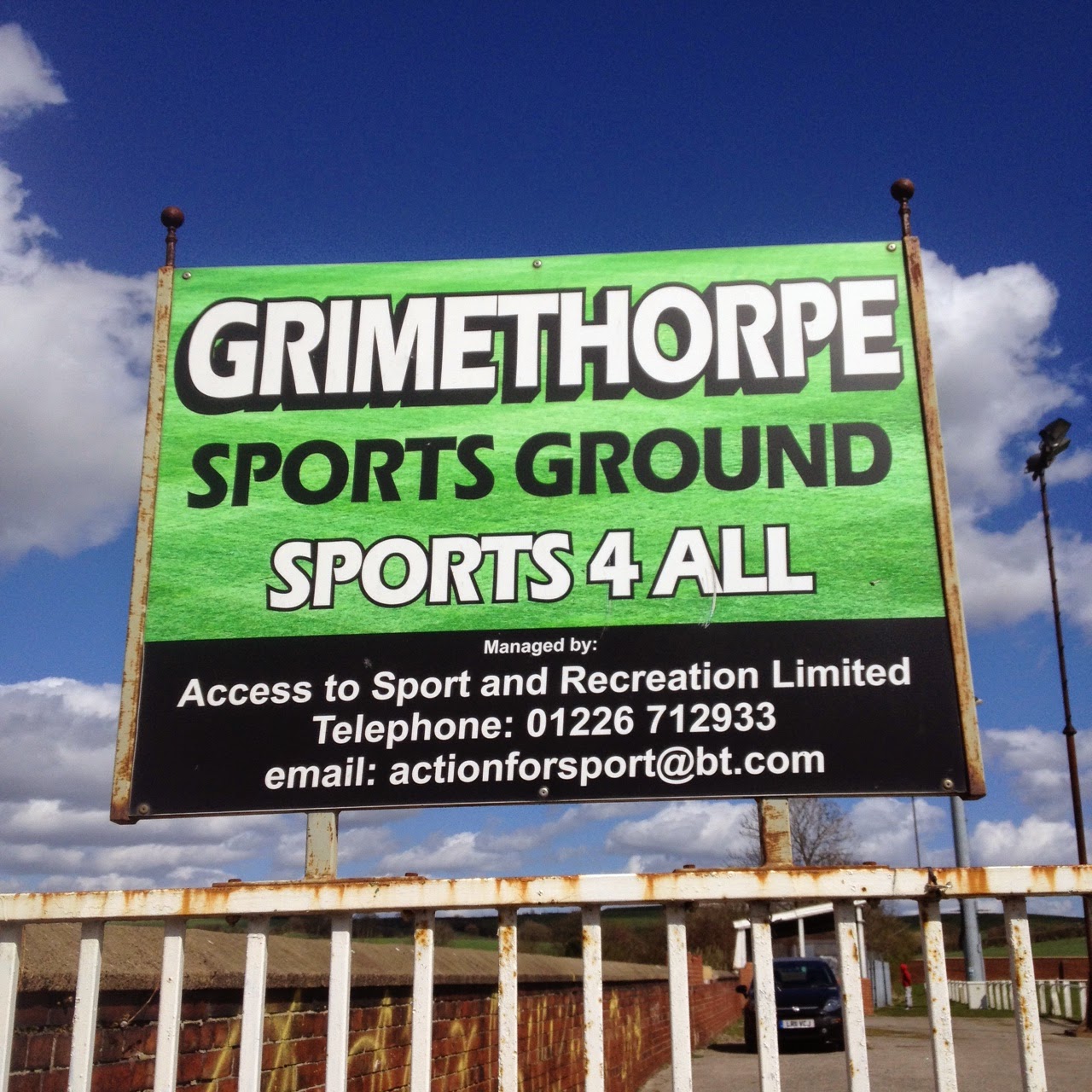 Easter is spent in God's own country. On Saturday we're up in York, staying over at my brother's house in the quaint village of Upper Poppleton. Sunday and Monday see us based in the village of Grassington in the Yorkshire Dales. The weather is kind to us as we hike the hills of Wharfedale, which is bathed in glorious, unseasonal sunshine. Pint of the day is in the Craven Arms up at Appletreewick. I was tipped the wink on this boozer by none other than blog legend, Trumpy Bolton.

I arrive home in Keyworth just in time for Sticky jnr's semi-final clash with our good friends from Kimberley. A smashing game of football is spoilt by a referee who has no man management skills or personality to handle a 'big game' or razor sharp audience. What should have been a night to remember for the Keyworth young guns turned into a Brian Rix farce.

I had planned to watch FC United up at Witton Albion, as 'The Skipper' didn't have a match this weekend. His semi-final against Heath Hayes is suddenly brought forward by a week. Mrs P kindly agrees to take him. It gives me the chance to visit a ground I've had my eye on for a while since excellent blogger 'The Onion Bag' rocked up here earlier in the season. 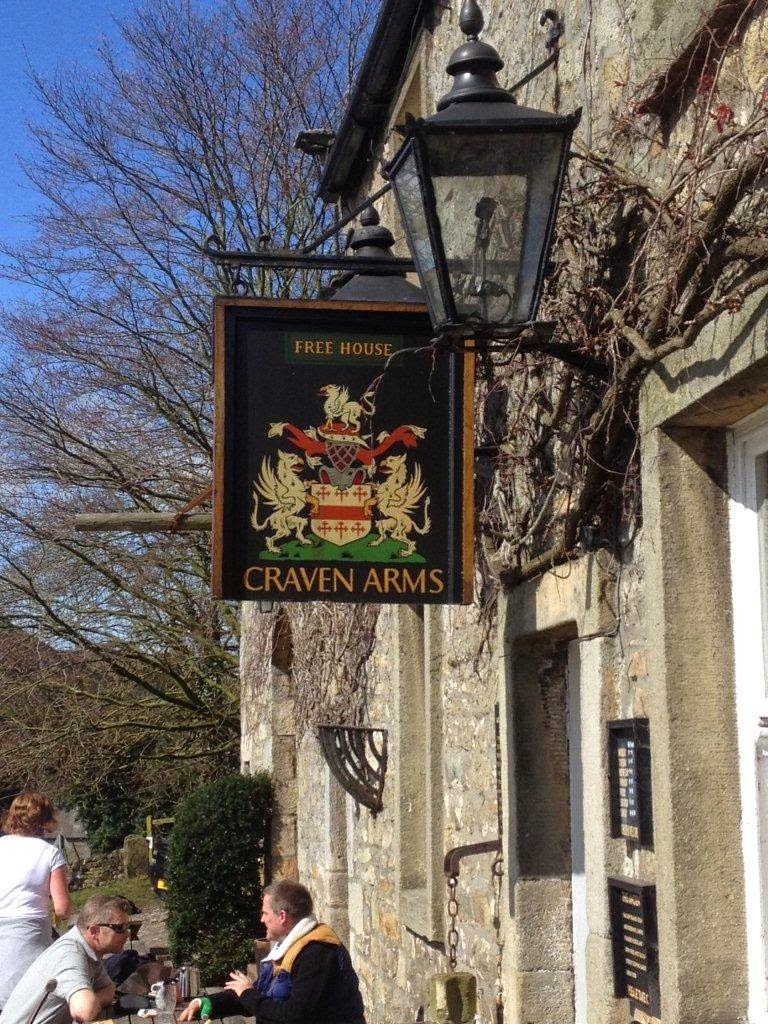 I would have settled for a good old spit and sawdust public bar, but Mrs P is in tow and wants to go upmarket. We end up in one of those God forsaken chain bars called Revolution at Nottingham's Cornerhouse complex. I gently tap my fingers on the bar patiently waiting for ten minutes as barmen chop up cucumbers and mint for ridiculously overpriced cocktails. My patience finally snaps. I beckon Mrs P from her comfy seat and storm past a confused doorman, who I'd only said good evening to ten minutes ago.

I shout up a bottle of Becks and a glass of wine in the theatre bar and get gassing to Dringy who I've bumped into. The play is magnificent and worthy of a standing ovation. 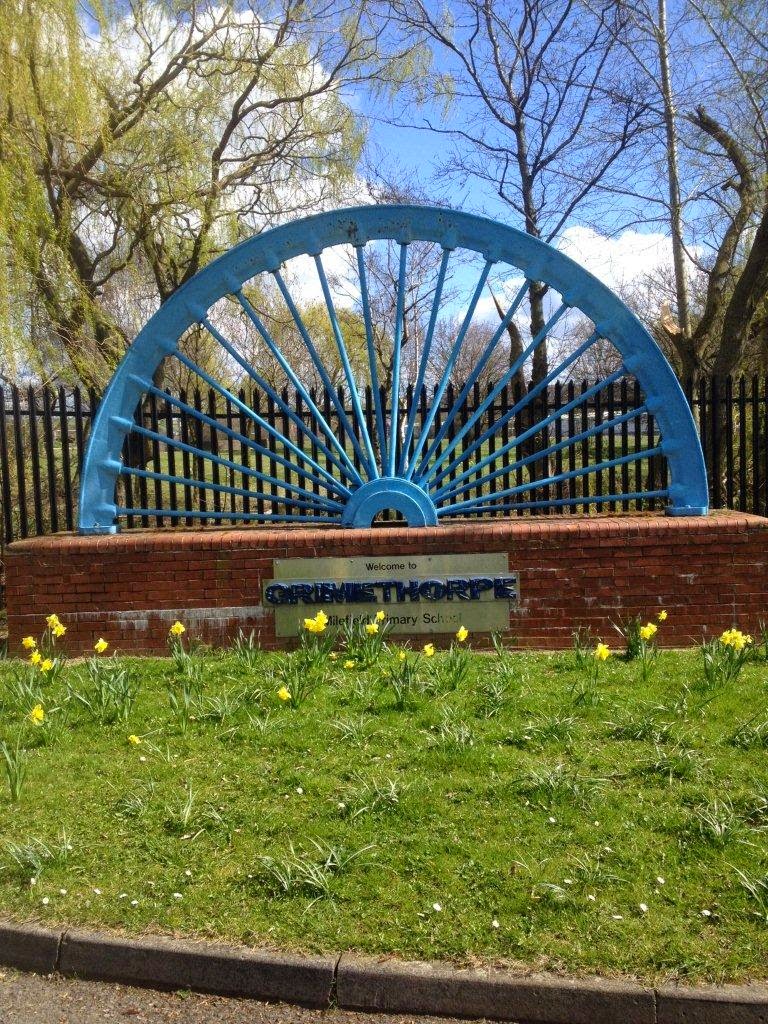 It's Saturday morning, Mrs P has already skedaddled off to Cannock for the football. Murphy the budgie is in one of of his moods. He missed Brian Matthew's 25th anniversary show on Radio 2 last week because Sticky jnr overlaid after a night on the lash. He catches the last hour of Brian this morning. I leave him whistling to Frankie Valli's 'Beggin' as I dash down to the bookies in Ruddington to place some bets on the Grand National.

I jump onto the A614 and head up towards the A1. Paddy McGuinness is guesting on the Danny Baker Show. Baker asks him who his favourite ever footballer is. The Bolton fan replies Jay Jay Okocha. The A1 southbound is gridlocked. Some poor sod has died in an accident. The police are recovering a vehicle.

I notice signs for Pontefract. I was given the impression by one of their officials on a messageboard that I wouldn't be welcome up there for having the audacity to lambast their management team for using foul and abusive language.I'm soon driving through Goldthorpe towards Grimethorpe. These places are synonymous with the Miners' Strike in the 1980s. 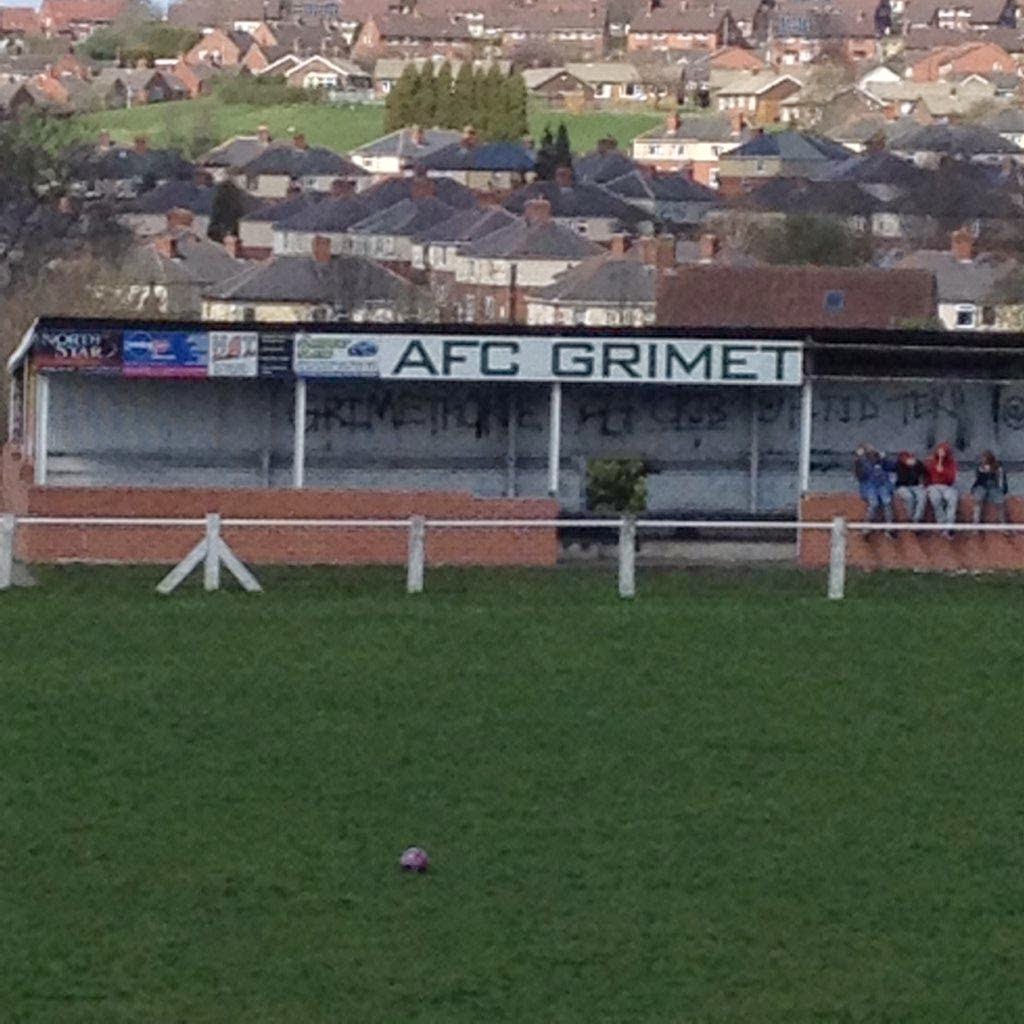 Grimethorpe is a village in the Metropolitan Borough of Barnsley with a population of 2000. At its height the merged colliery once had a workforce of 6000. The mine was closed in 1992. In 1994 an EU study on deprivation listed Grimethorpe as the poorest village in the country. £164 million was pumped into the area. 50 new businesses sprung up, providing 5000 new jobs.

I pass factories and distribution centres on the outskirts of the village. A sad statistic I did notice is that more men died at the mine than did during two World Wars. The village is in far better shape than I'd imagined. I mistakingly pull into the Working Men's Club, before finding the entrance to the Grimethorpe Sports Ground.

A covered stand has signage above it saying 'Grimet' the 'horpe' is missing. Two teenage boys and two girls are sat on the wall. "What happened to the 'horpe' in 'Grimet'?" I enquire. "Someone 'borrowed' it" pipes up one of the lads. "Are you a 'Bobby'?" asks the other boy. I've got one of my new range of coats on from Next. It'll probably have the ladies in Grimethorpe in all of a lather.

I'm asked again if I'm a Bobby while I take photos of the WMC. Wounds have been slow to heal since the Miners Strike, when Maggie Thatcher sent up to South Yorkshire some of the Metropolitan's finest thugs. 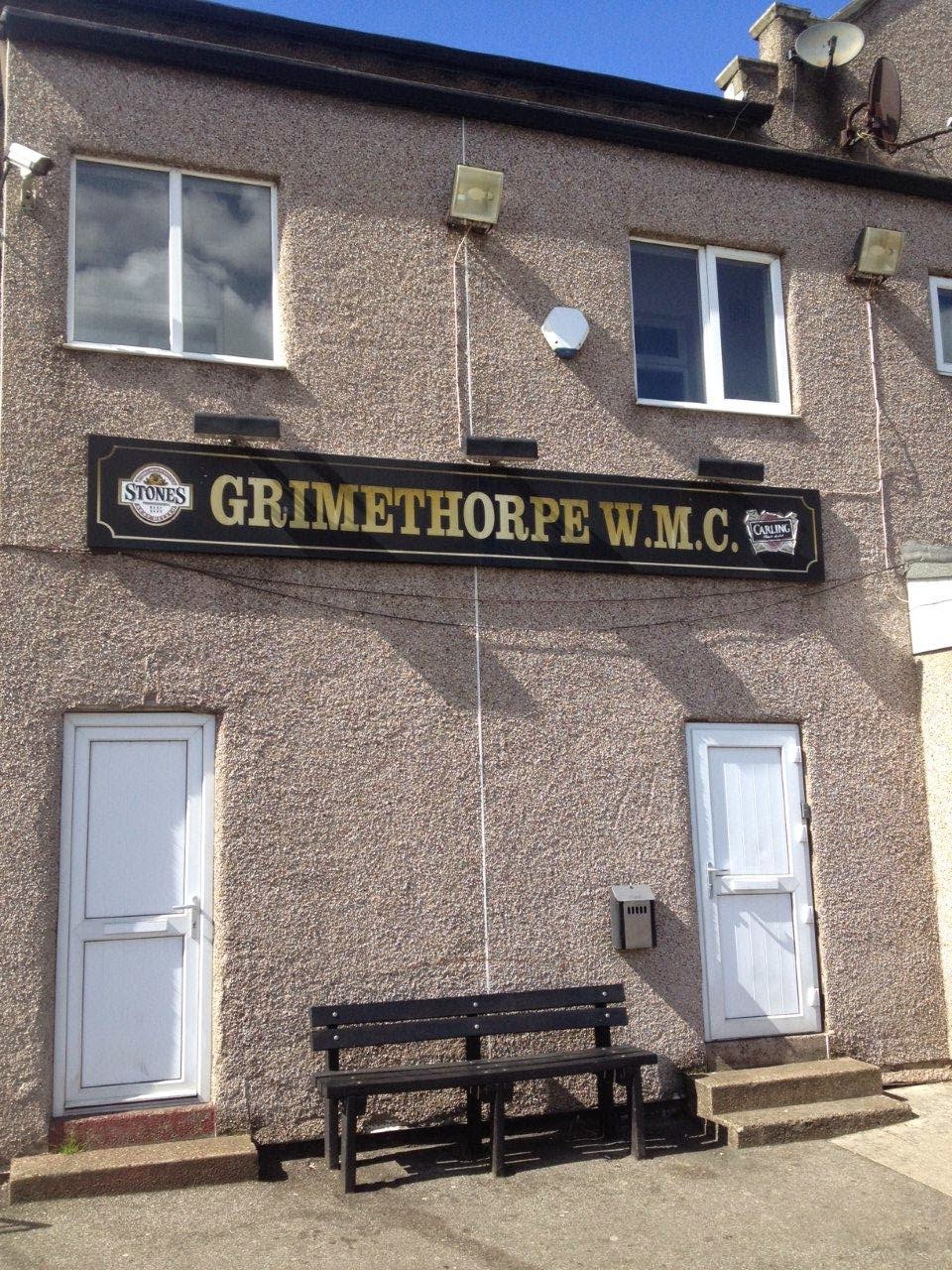 The ground provides a wonderful vista. They even have crash barriers at the top of a grass bank, to lean on and admire the beautiful countryside. I'd already ridden up to the local junior school to take a picture at the entrance of the old pit wheels.

I chance upon a gang of youths swigging from cans of Strongbow cider. I ask about the adjoining cricket pitch. "Not played in ages, team were disbanded, full of drunks." All that is left is an artificial strip. I ask the same youth what he does for a living: "I'm the local knobhead, and him, see him, (pointing at his mate) is a smackhead." I'd already seen remnants of a fire in the stand opposite, where local druggies congregate at night.

Grimethorpe Sports are unbeaten this season in the South Yorkshire Amateur League. The visitors, New Bohemians, are third from bottom and leaking goals. Today I'm a goal whore. The referee is only about 17 and has no linesmen. The players treat him with respect, never questioning any decisions. Grimethorpe are 3-0 up at the break and go on to win the game 7-1. The highlight of the game is the goal scored by the visitors, who have stuck to their task.

The ground and club need some tender loving care and a hug. I'm told the under 14s are their only junior club. The ground is tragic, but also beautiful. It will go straight into my top five, just for those reasons.

Mrs P backed the winner of the National. £43 isn't a bad return for a £1 each way stake.