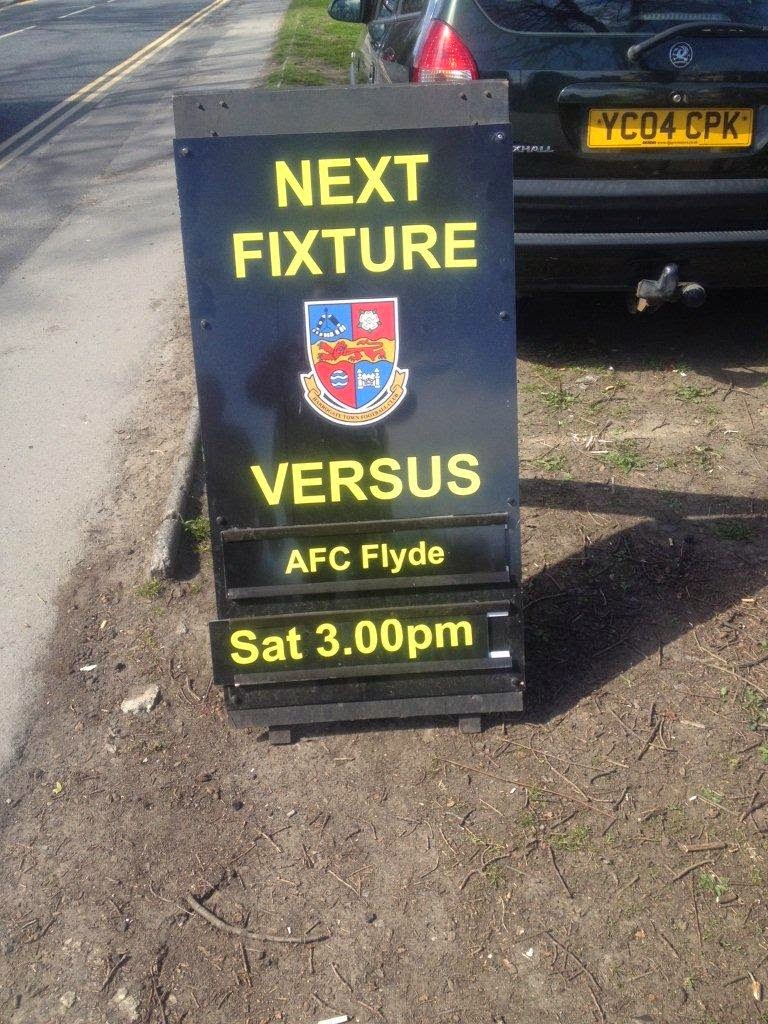 The season is drawing to a close. I've enjoyed my season off from recruiting and managing youth. Next year I'll be involved with Clifton All Whites Under 19s in the North Midlands Floodlit League. I'm relishing the challenge of developing young players, once again, helping them on their way to adult football.

It's Friday evening. I've had a long old week at work. We've all been in sales training for two solid days. It's intense, but also fun. I need a couple of pints to unwind for the weekend. Mrs P and I take a 30 second stroll down to The Pear Tree, my new local. It has replaced the artist formerly known as The Fairway. The old pub was an eyesore and a blot on the landscape. It only took a few months to restore the place.

I have a couple of pints of 'Fool Proof' from the Caledonian Brewery. I miss the old jukebox in here. They'd often leave the back doors open on a hot summer's day, whilst I was spanking the Bombay Sapphire on the patio at my house. It would be accompanied with Boney M or the Bay City Rollers belting out from the public bar. 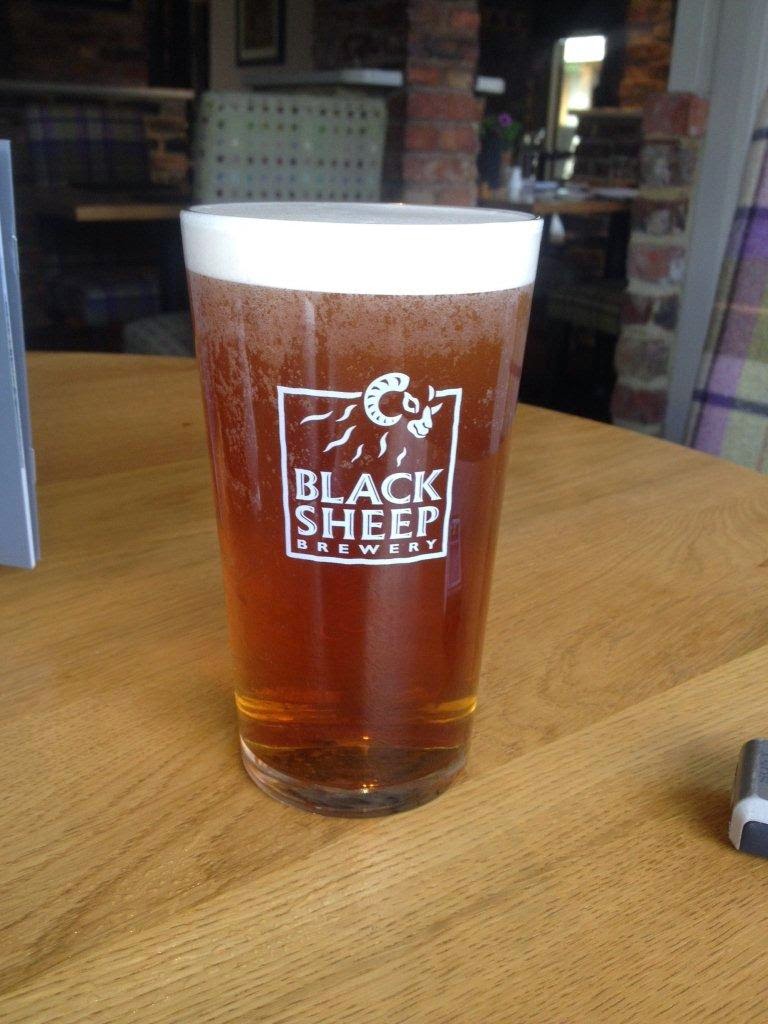 I dash home to keep Murphy the budgie up to speed on the latest score from Carrow Road as his beloved Canaries take on Middlesbrough. An Alex Tettey own goal puts the kibosh on Murphy celebrating anything this weekend. He asks for the 'Do not disturb' sign to be placed over his cage (towel) as he sulks on his swing.

Murphy's mood has not improved in the morning; he's asked that Brian Matthew's Sound of the 60s Show is not switched on - the mardy little sod. It's not gone down too well that I'm travelling to Harrogate. The top of the Conference North is on a knife's-edge. It's a two horse race between Barrow AFC and AFC Fylde.

Danny Baker is broadcasting out in the USA for his Five Live Show. He's near to where the NASCAR Racing takes place. Baker is filming an eight part series called Cradle to the Grave, an adaption of his autobiography 'Going to Sea in a Sieve' which features Peter Kaye playing Baker's father, 'Spud.' 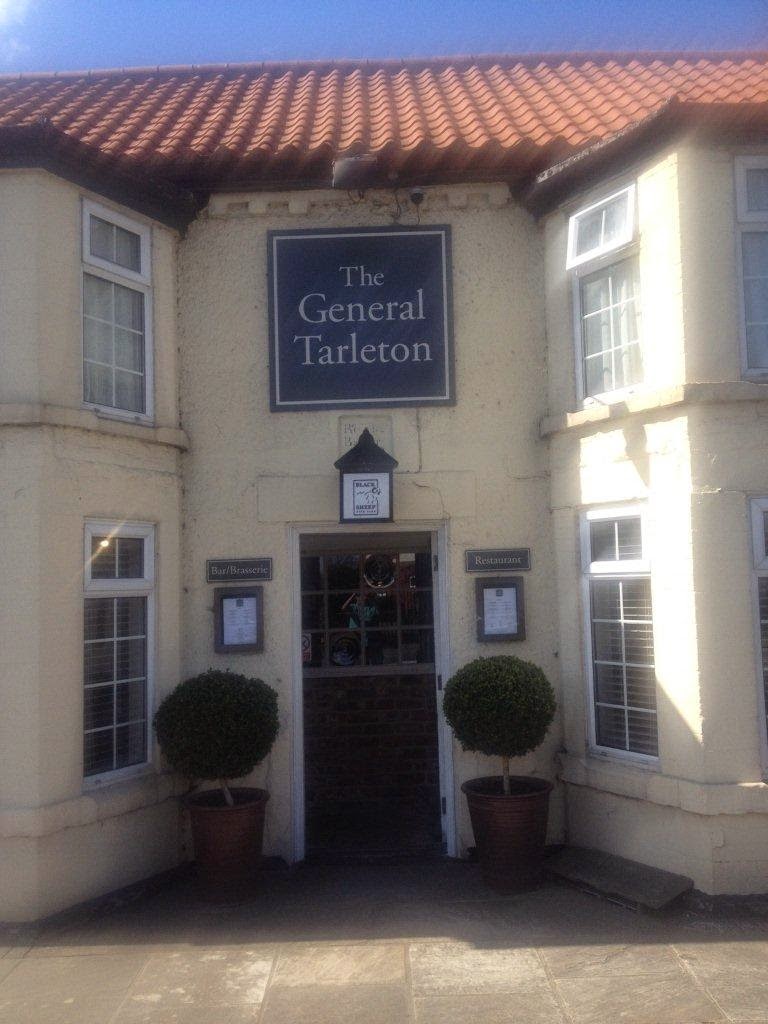 The journey through South and North Yorkshire is without incident. Darren is on board today. I've picked a pub in the affluent village of Ferrensby that requires a tick-off. The General Tarleton is way out of my league. It's a renovated 18th Century coaching inn, and a bloody posh un, at that.

We're pounced upon by a waiter who sounds like Rene from the sitcom 'Allo Allo.'There about 20 odd tables vacant, 'have I booked one?' No I bloody haven't. I only want a quick pint and a sandwich. After some banter we have a pint of Black Sheep and a beef with horseradish sauce sandwich.

It looks like folk are pouring in from the local Darby and Joan club. Those ladies will be dropping like flies if they clock my new Vans and blue shirt from Next. I'll have to put my first aid skills to the test at this rate. We 're comfortably the youngest in the pub by a country mile. 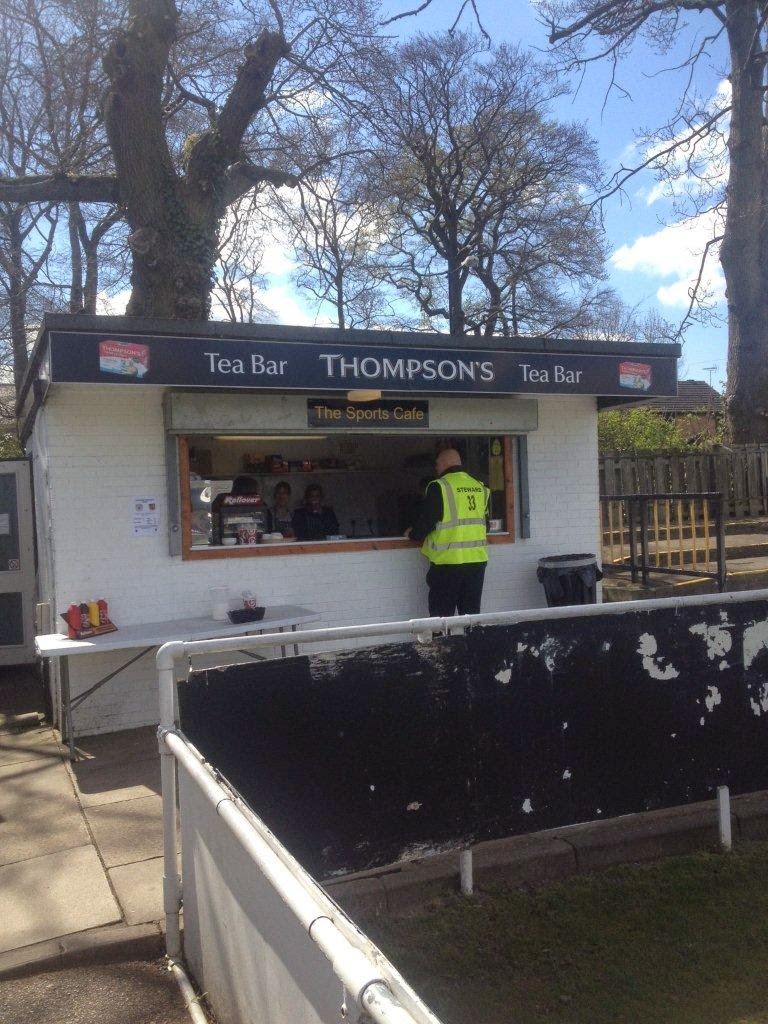 We can't exit the joint quick enough. It's a beautiful drive to Harrogate through the picturesque town of Knaresborough. We park just off the Wetherby Road, opposite 'Town's' ground. Harrogate has a population of 75,000 and in 1982 hosted the Eurovision Song Contest. Notable people born in the town include: footballers Andy O'Brien and John Scales, actor Hugo Speer and commentator Jon Champion. Electro-Techno band Utah Saints are from Harrogate - they are a personal favourite of 'The Auctioneer' who I worked with for many years.

We stretch our legs and manage to find the only council estate in the town. A Ford Capri flies around the corner and over a speed bump - I thought it was Bodie and Doyle from The Professionals. We pay £12 on the gate and £2.50 for a disappointing programme that is stuffed full of advertising. The ground is a beauty. I grab a cup of Punjana tea from 'Thompson's Tea Bar' and head over towards the 'Eddie Brown Stand' to hide from the sun for a few minutes. I while away the time amusing myself at the PA guy's choice in music. I roar with laughter when he plays 'Rasputin' by Boney M - I thought I was on the patio at home for a minute. 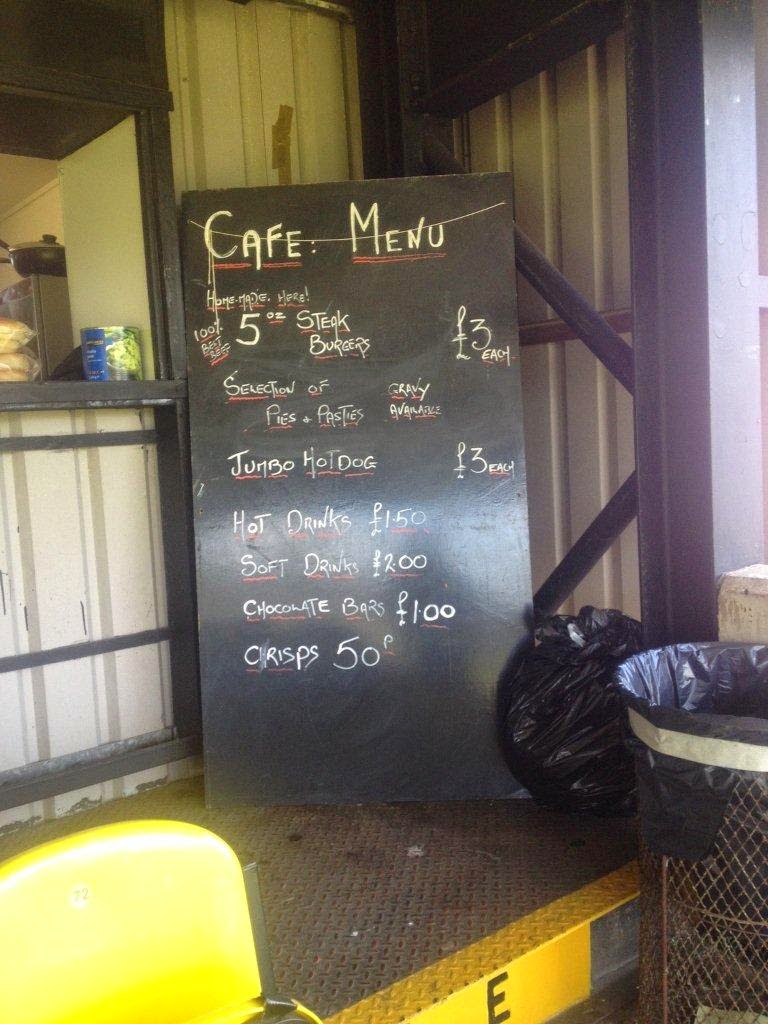 The pitch is patchy, the grass is short. Groundstaff try to revive it with water from sprinklers. Harrogate Town were founded in 1914. They are managed by former Lincoln City defender Simon Weaver, who played alongside Northern Ireland international Gareth McAuley when Big Keith Alexander was the boss of the Imps.

AFC Fylde, from Preston, are managed by former Tranmere defender Dave Challionor - he of the famous long-throw fame. Ironically the two sides could meet in the Conference Premier next season. A coach load of flat-cappers, with trays of pie and gravy, troop off in the direction of the goal their team will attack. 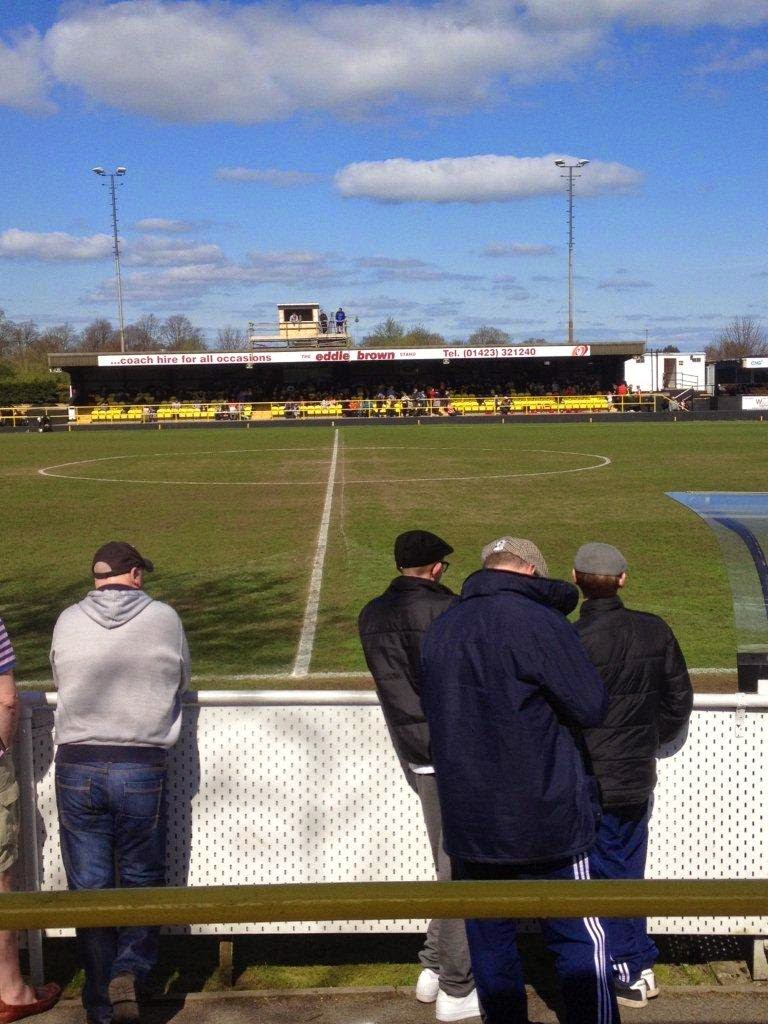 Harrogate start the game well and take a deserved lead with a deflected free kick from James Walshaw looping over the wall into the net. Dave Challinor is edgy and nervous. His team snatch at chances before scoring two in a minute on the stroke of half-time.

A guy walks by at the break as the PA bloke spins Madonna's 'Holiday' for the second time today. He has a cat in a flap on his head. He says he misheard the guys travelling say 'wear a flat cap.' It's Lancastrian humour at its best.

Two further goals in the second half for Fylde kill off any chances of a Harrogate comeback. 'Cat Flap Man' starts off a Conga in the Eddie Brown Stand, which all the Harrogate junior teams join in with amusement. It caps off another fine day in 'God's Own Country.'

Man of the Match: Danny Rowe
Posted by Sticky at 7:38 PM

Nice report. I like the cask ale reference but mixed feelings about the footy. My son is Fylde's No.5 (played in agony due to a hip injury. That's what centre halves do) but I'm a Tranmere season ticket holder. I wasn't expecting to watch him play against Rovers but it's looking all too likely.