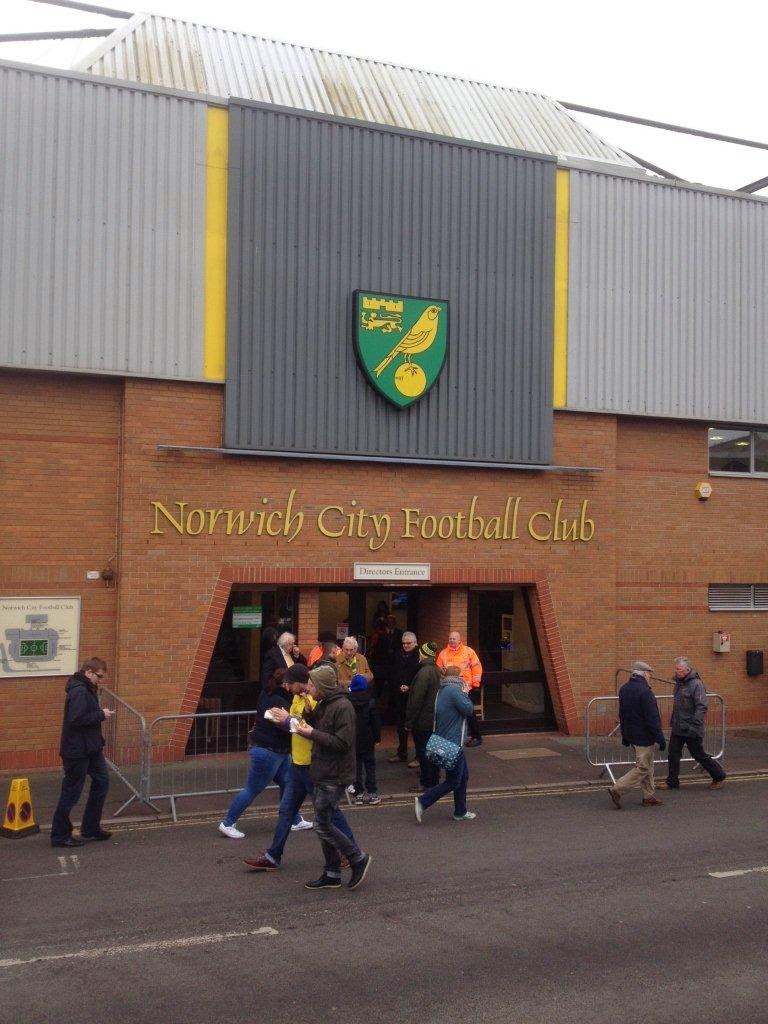 I've got this little budgie called Murphy, he's not named after the twins Jacob and Josh at Norwich City, but former Lincoln City manager Colin Murphy. He was born in Handsworth in Sheffield, the same place as the actor Sean Bean. He's supported Norwich City since he was a little lad; it's because he sports the same colours.

It's Tuesday evening, Mrs P is watching those two twonks on Masterchef. Murphy is sat on my shoulder staring at the Live Scores app on my phone. He suddenly starts crying and blubbering like a little baby. I glance at my phone, James Vaughan has put the Terriers of Huddersfield 2-1 up against the Canaries of Norwich in the 96th minute. Within two minutes he's pecking on the glass of my mobile in delight as Jamaican youngster Jamar Loza poaches an equaliser with the last kick of the game.

It's Saturday morning, Murphy is nowhere to be seen. He's upped and gone, flapping his wings on the long journey east to Norwich. The Big Man (the artist formerly known as White Van Man) had forgot to buy my feathered friend a train ticket. I'm up at the Big Man's for a full English. The fried eggs are served sunny side up. Breakfast is mopped up with a slice of bread and butter. 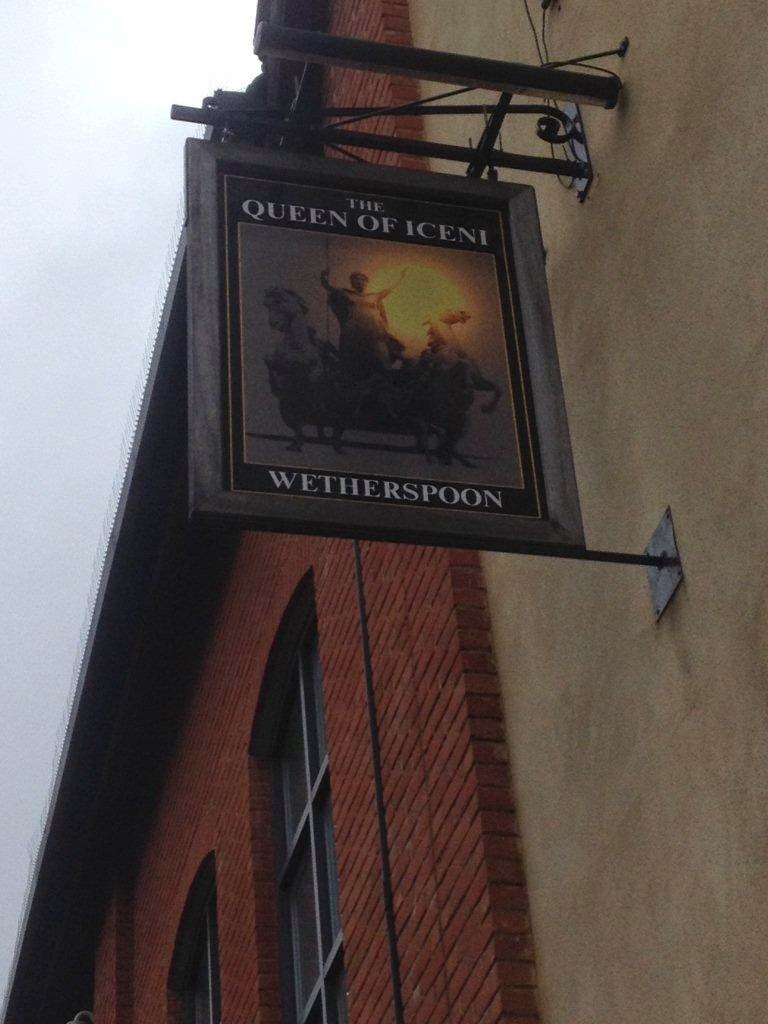 'Rotton' drives us to Nottingham train station in his Mini. Sticky squeezes into the back, as the Big Man rides shotgun side. It's a gruelling 15 minute drive due to Capital FM being station of choice. I have a bit of moan. He changes it to Smooth FM. Now that's better. We meet Bruiser at the station. He annoys the taxi driver by blasting his horn to sound his arrival. He's still cooing over his tick-off at Marseille's stadium in the South of France a few weekends ago.

The train departs bang on time and is soon rattling its way through Grantham and Peterborough. There are a few Chesterfield fans making their way to London Road to watch the Spireites. The Big Man reads the Mirror and terrors a few 'rowdy birds' on Facebook, while Bruiser gives me the lowdown on the Tricky Trees - I haven't watch them since December 2013.

We're met off the train by Keyworth United legend Dean Bennett and his family. Deano lives just outside Norwich city centre. Norwich  lies on the River Wensum in the county of Norfolk, with a population of 140,000. It has the most visited library in England. It had 1.3 million visitors in 2013. ITV Anglia is based in the city. Famous custodians from the area include: news reader Carol Barnes, war heroine Edith Cavell, turkey farmer Bernard Matthews, actor Sir John Mills, Horatio Nelson, singer Cathy Dennis, politician Ed Balls and footballers Danny Mills and Chris Martin. 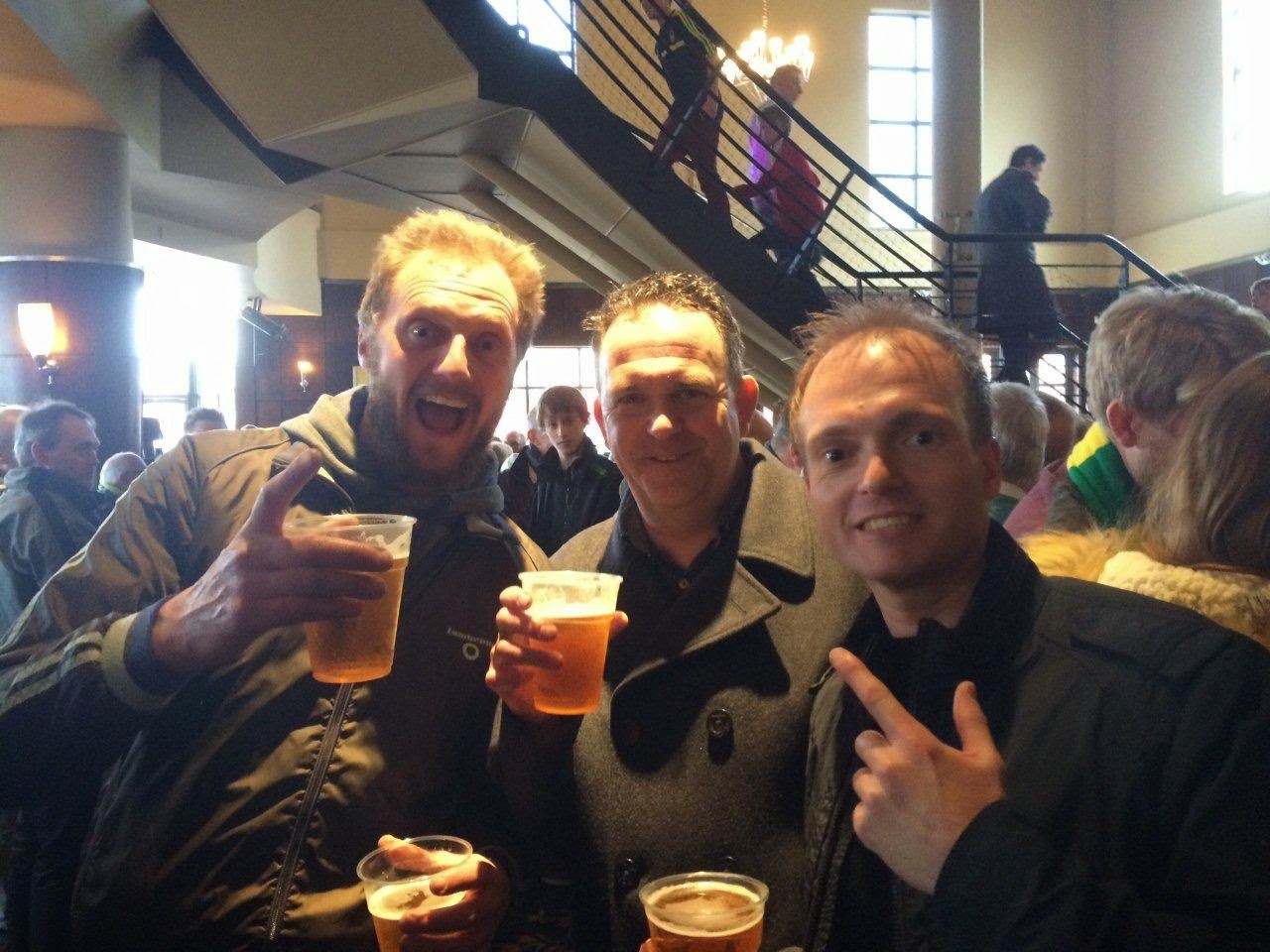 I once visited Carrow Road back in 2004, whilst touring 107 grounds in five days for charity. Club legend Darren Huckerby very kindly gave me a signed football which raised £100 at an auction. Former striker Chris Sutton is never mentioned in our house. He is solely responsible for the demise of my club, Lincoln City.

We wander through Norwich's version of Nottingham's Cornerhouse complex. We finally tip up at Wetherspoons' the Queen of Iceni. The place is mobbed out with folk. I sink three pints of 1664. News is filtering through that Middlesbrough and Brentford are both getting beaten. Bruiser is a proper shirker when it comes to drinking. He double-parks a couple of Foster shandies. There's a good ambience in the bar, with both sets of fans chanting. 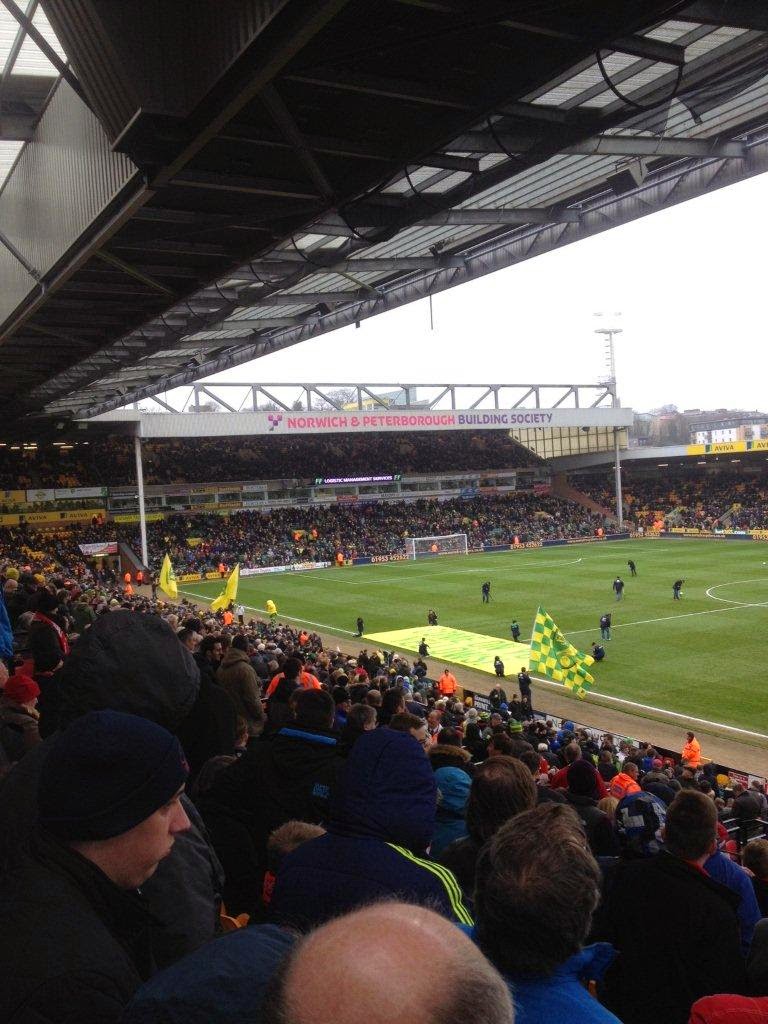 It's been an expensive day The train ticket is £42, match ticket £35. The programme is great value at £3 and a terrific read. I leave Bruiser and the Big Man tucking into some of Delia's award-winning pies. I take my seat in The Jarrold Stand and admire the view, but not the pitch, which looks sub standard.

Forest kick against a swirling wind. Gardner and Lansbury sit deep as the Tricky Trees invite Norwich to attack. The Canaries full backs hug the touchline, peppering the penalty area with an endless stream of crosses which are dealt with superbly by Wilson and the impressive Lascelles.

Plan A bites the dust, Blackstock pulls a hamstring and is withdrawn. The dangerous Antonio is drafted in from the wing to become a lone ranger. Ruddy hares off his line to save bravely from him. Osborne stings the 'keeper's hands with another effort. Forest look dangerous on the counterattack, but it's Norwich that have a lion's share of the possession. 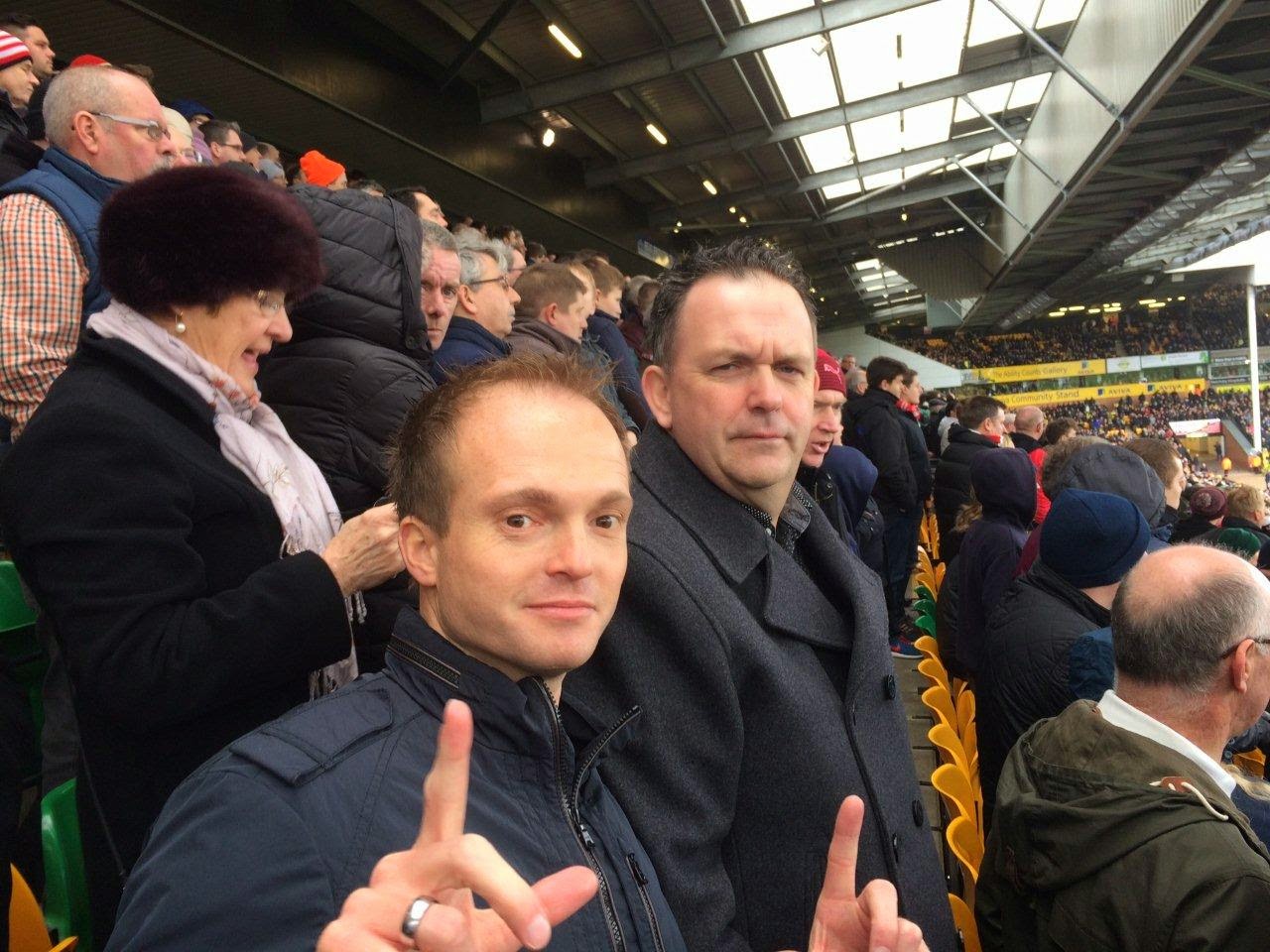 It looks job done for the tactically astute Dougie Freedman as Forest soak up the pressure, with Darlow relatively untroubled. With seconds remaining, and within the blink of an eye, Norwich take the lead following a wonderful move started from the back. The ball is threaded through the eye of needle to Howson who somehow squeezes his shot past Darlow.

There's a mesmerising spell of play from Norwich in the first 20 minutes of the second half. Mancienne, a square peg in a round hole, is getting terrorised at right back. Another cross comes in from Olsson, it's cheekily back heeled into the net by Jerome.

Norwich are rampant. Chris Burke lazily fails to track back, Olsson takes a tumble, it's a stonewall penalty. Hoolahan scores his first goal at Carrow Road in over two years. The Canary faithful suddenly find their voice, including Murphy Palmer, who I swear is perched on the gantry. 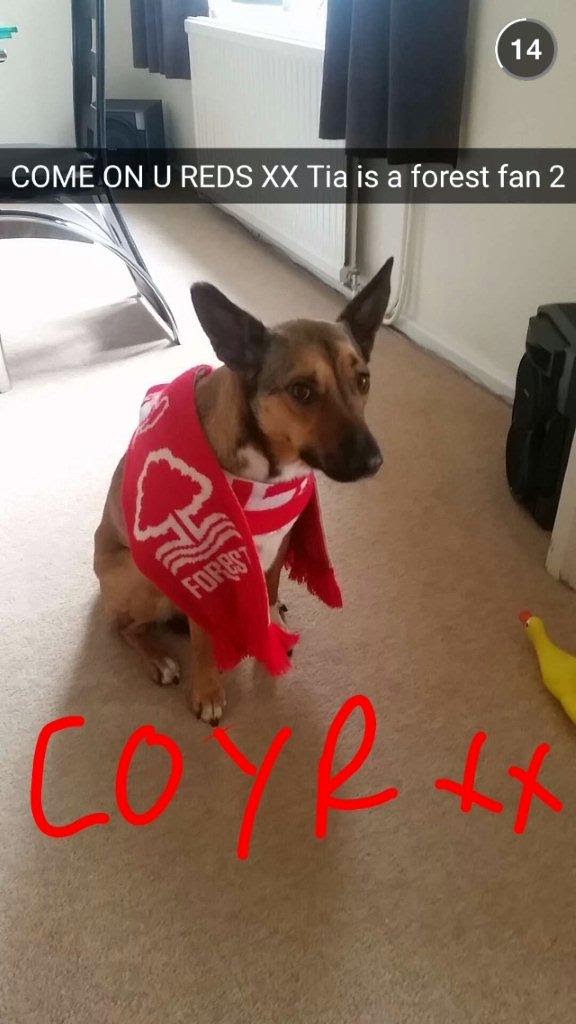 A goal is pulled back after Ruddy parries an effort from Patterson, with Burke close on hand to tap home. A Lascelles header is chalked off with the hapless Ruddy cleaning windows.

The score and performance is too much to take for the usually partisan Bruiser. He is the original 'the bloke behind me.' It takes it's toll on the three guys in front of us who depart the stadium to escape Bruiser's effing, jeffing and constant moaning with ten minutes remaining.

There's an eventual end to the day when the train home is delayed and the British Transport Police summoned as drunken, loutish Forest fans fall out with one another over seating arrangements.

Man of the Match: Wes Hoolahan