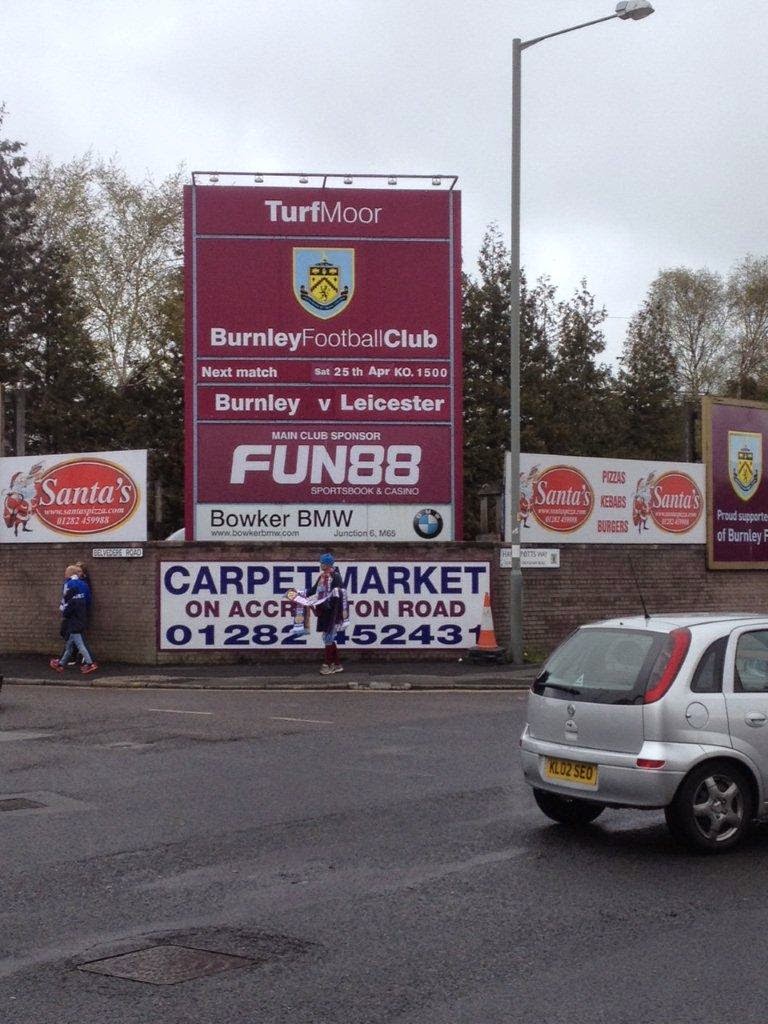 It's 10:00pm on a Saturday evening. I'm slouched on the sofa, glass of Merlot in hand, watching the news headlines before Match of the Day. I glance down at my phone when the message alert bleeps. I reach out for my spectacles and stare into the console. The message from Trumpy Bolton reads: "Do you fancy going to Burnley next week?"

I can tell he's been on the sauce all day, when he finally phones up. There's an outside chance of a ticket, despite the Foxes selling out their 2469 allocation. He will have forgotten in the morning. We've no chance of going. On Monday morning at 9:15 the legend confirms he has two tickets. He says that he'll have to kill me if he tells me how he bagged them.

I pick him up on Saturday morning. Trumpy is swinging his carrier bag of full of pear cider and is sporting a St George's Polo shirt. He untwists the top off another plastic bottle full of blue liquid. I thank him kindly for bringing some screen wash. He begins to mix the liquid with his cider, which turns the colour of green. It's only WKD that he's poured in! 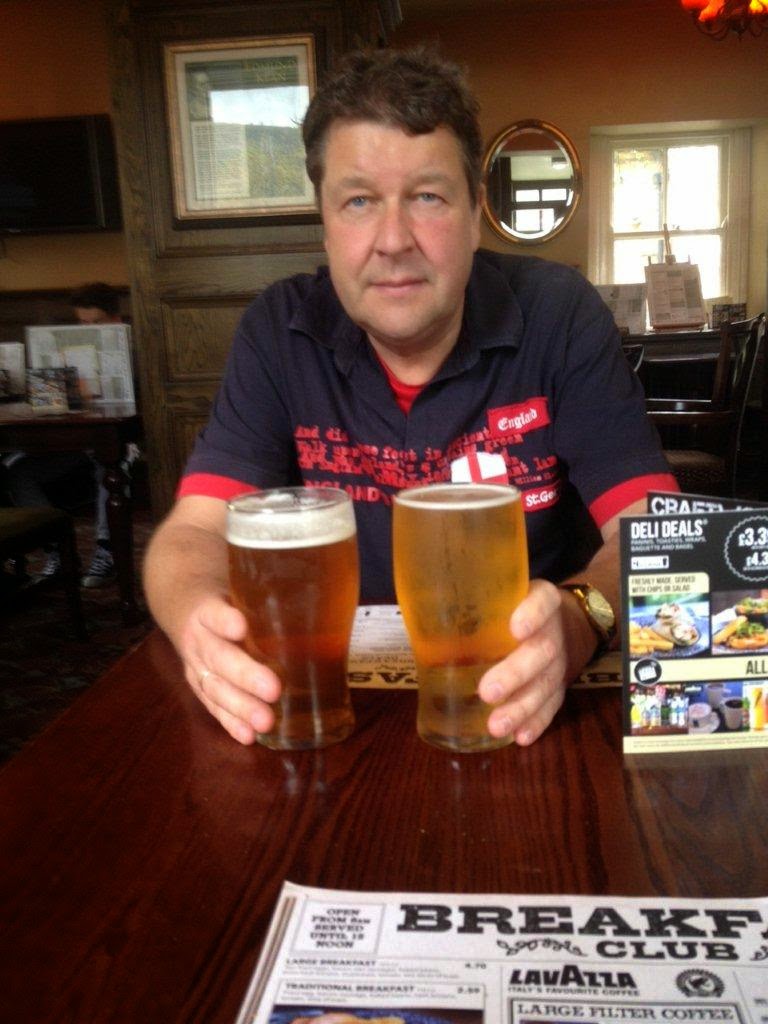 Trumpy is not too chuffed to hear that 'The Jester From Leicester' - Mark Selby, has exited the World Snooker Championship in Sheffield. The legend is a massive Leicester City fan. He has seen the club play at over 60 different grounds.

Supporters of Burnley and Leicester best be seated when you read the next line. Trumpy Bolton's hobby in life is to make a financial transaction in every village, town and city in England, Wales and Scotland. He's heard on the quiet that there's a new Wetherspoons open in Otley, up in West Yorkshire. It's the birthplace of England rugby union player Mike Tindall and our first port of call on today's trip. 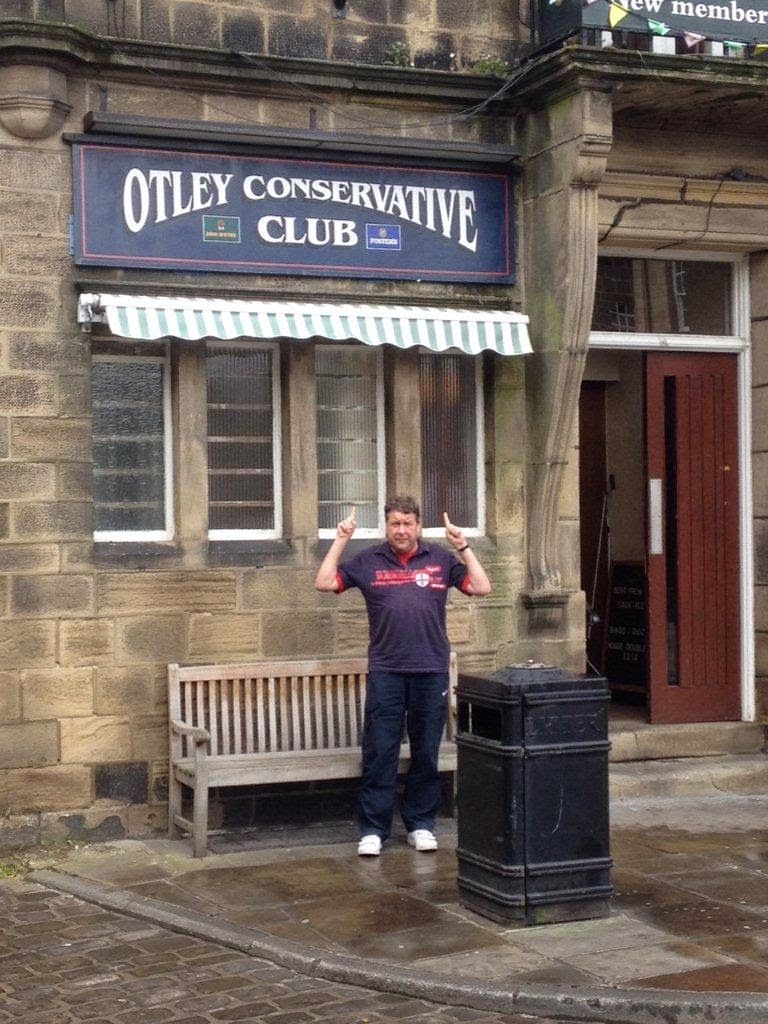 In less than two hours I'm squeezing the 'Rolls Royce' into a tight parking spot on the High Street. Trumpy poses outside the Otley Conservative Club - he loves the Blues. 'The 'Bowling Green' is opposite the fire station. Back in 1857 it was a court and session house. It's been transformed by Wetherspoons and tastefully renovated.

Trumpy has already seen off his cider and WKD. He shouts up a pint of Golden Sheep and a pint of Thatcher's Gold. It's just a full English and a cup of coffee for Sticky Palms. We're soon heading North again, as we crawl through Ilkley towards the village of Glunsby. The Dog and Gun is in a lovely spot. Bolton has soon guzzled his pint of Timothy Taylor's. Burnley is only a short drive away. 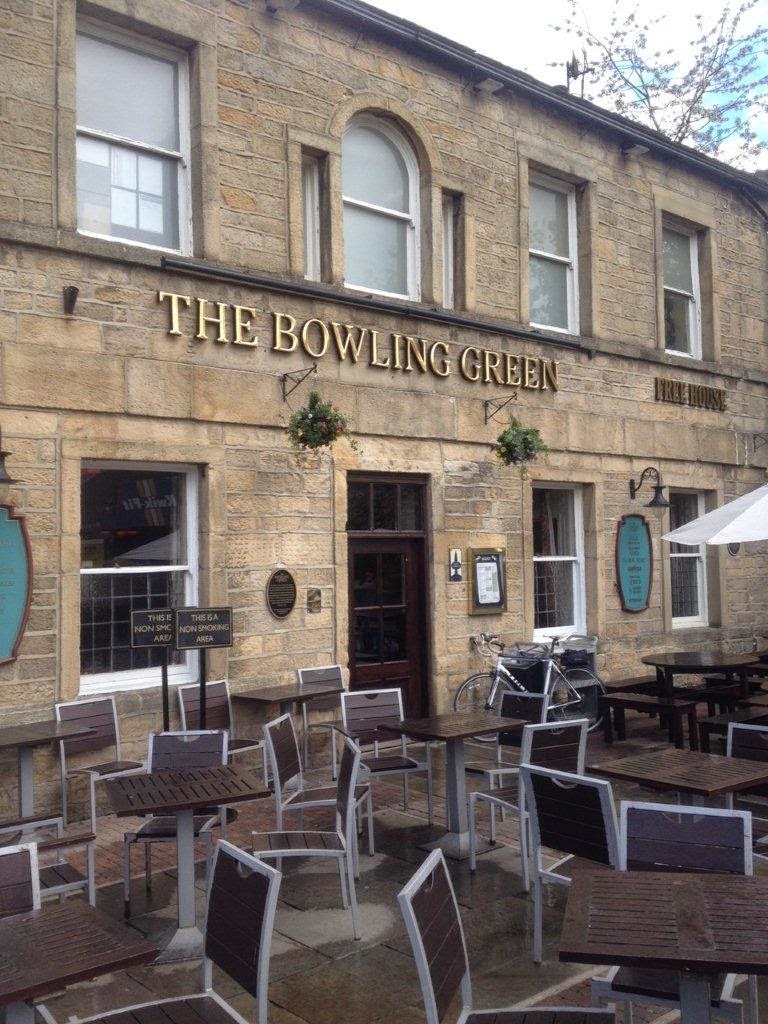 It's only 12:30pm, we've got bags of time. I turn right, close to Turf Moor, driving past the Burnley Miners' Social Club, before parting with £4 to park the car. It should give us a quick exit onto the M65. We walk towards the ground. There's a party atmosphere and community feel about the place. I came here in the early 90s. Through a drunken haze I vaguely remember Burnley beating Rotherham 2-1 in an FA Cup tie. A boy called Graham Lancashire scored the winner. Shaun Goater was a sub for the visitors.

Burnley Cricket Club seems a popular venue for visiting supporters. It's full to the brim with Leicester fans. I shout Trumpy a beer up and have a Guinness for myself. This could be interesting, the umpires are about to start play. Around 800 beer-fuelled Foxes' fans cheer as the bowler begins his run up. God only knows what the cricketers make of it all. The opening bat, Vishal Tripathi, a former high school pupil from Burnley, pulls the third ball of the game over the deep square boundary for six runs. It's met with raucous cheers from the Leicester faithful. 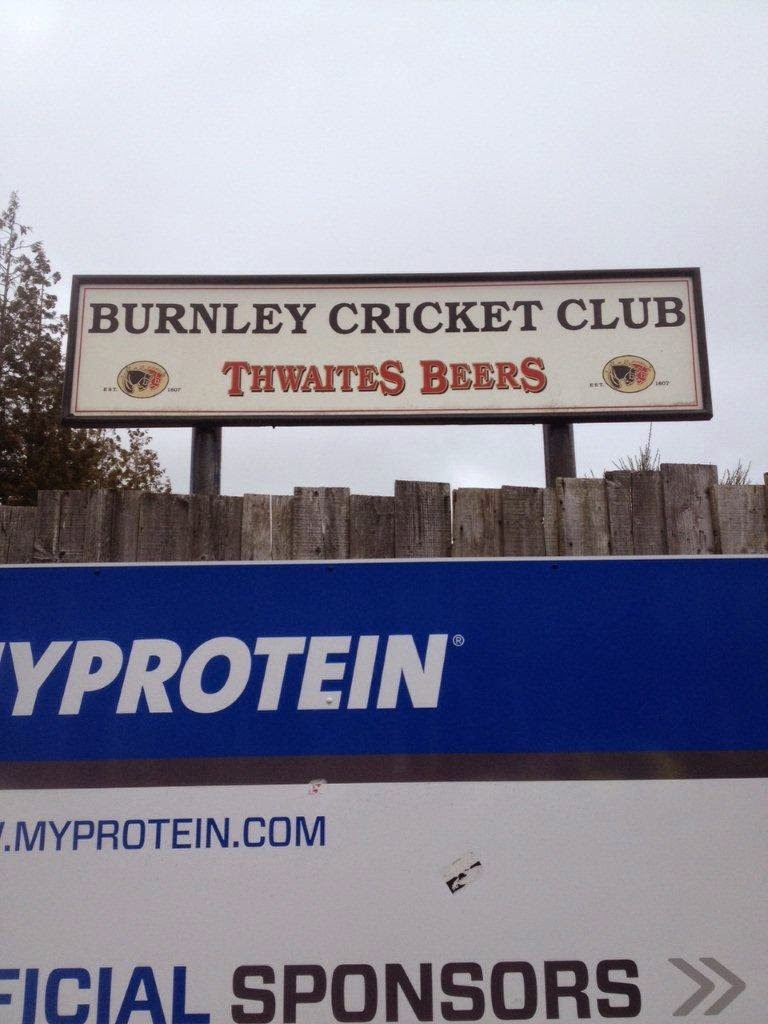 A batsman is caught in the outfield. He gets the full 'cheerio' treatment. It must be the lowest point in his cricketing career. He fails to make eye contact with the supporters, who are hanging over the balcony, as he trudges back to the pavilion. The infamous 'Zoonie Bus' has just rolled up. Big Derek grabs a chat with Trumpy. They've just rocked up after a heavy session in Rochdale and are well and truly spangled.

We take a short stroll to Turf Moor. Burnley is a market town with a population of just over 70,000 people. It was a prominent mill town during the Industrial Revolution. It's local brewery is Moorhouses which was founded in 1865 and whose award-winning real ales include the Pride of Pendle. Famous people from the area include: Sir Ian McKellan, Paul Abbot, Chumbawamba, Tony Livesey, James Anderson, Jay Rodriguez and Coronation Street crowd favourite Malcolm Hebden (Norris Cole). 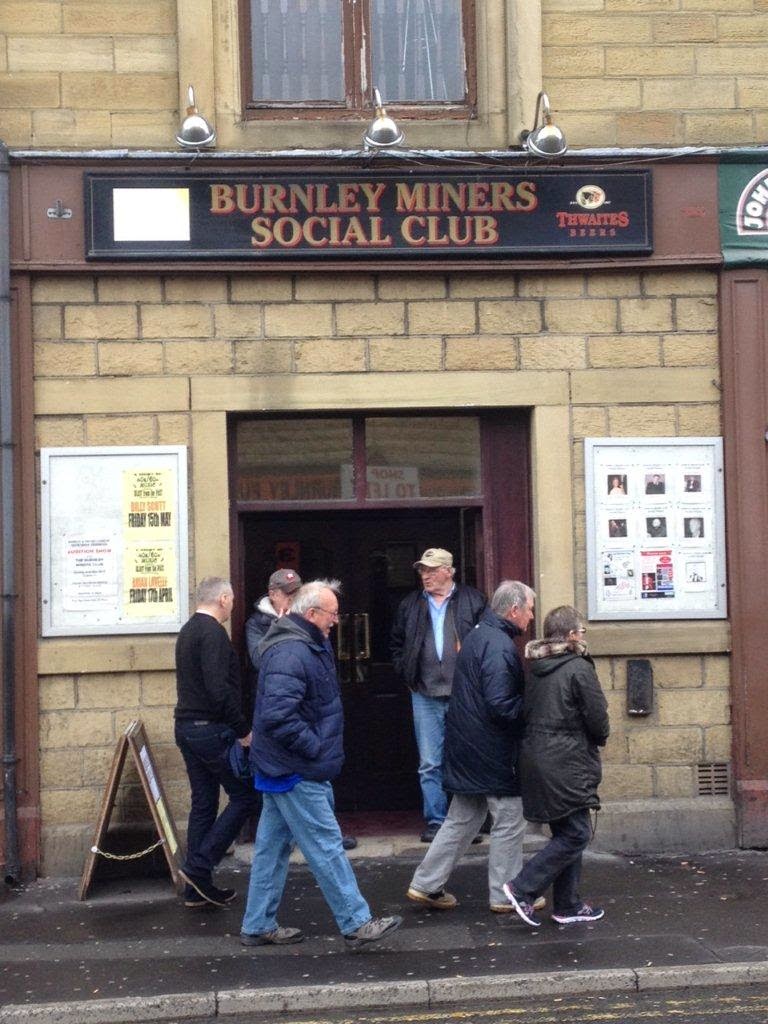 Burnley FC were founded in 1882 and were a founder member of the Football League. The won the old Division One in 1960 and were European Cup quarter finalists in 1961. Record transfer fee paid out was £3 million for Steven Fletcher from Hibernian. Record transfer fee received is £7 million from Southampton for Jay Rodriguez.

It's £35 for the ticket and £3 for an excellent programme with over 80 pages. We collect our 'Foxes Never Quit' t-shirts on the gate. They are complimentary from the Club, as well as free breakfasts for travelling support at the King Power Stadium and a £5 voucher to spend on a pie and a pint. It's a lovely gesture - other clubs should take a leaf out their book.

The Foo Fighters and David Bowie boom out of the PA. A minute's silence for the 30th anniversary of the Bradford Fire Disaster is impeccably observed by those actually in the stands - some Leicester fans are unaware of this down in the concourse. 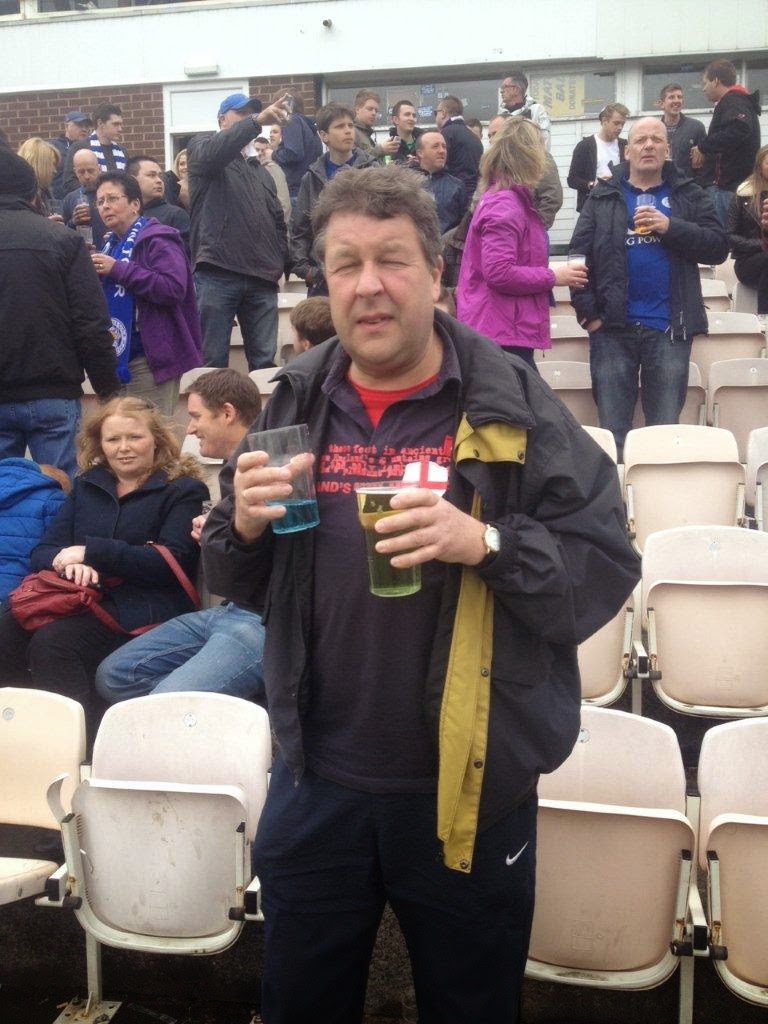 Leicester begin nervously. Wasilewski dilly-dallies on the ball, he's dispossessed and is lucky to see a last ditch block save his bacon. Both teams serve up poor fayre in the first half, it's devoid of any real quality, as the nerves begin to jangle. The most memorable moment is the free Holland's pie that Trumpy has fetched from downstairs.

The Clarets wheel out two former players at the break, who scored the goals that saved Burnley from dropping into the Conference in 1987 - at the expense of my team, Lincoln City.

The second half is much better as the game opens up. The pivotal moment is on the hour. Schmeichel saves from Ings, but Taylor is hacked down by Konchesky. Matthew Taylor is making his first start since August and taking his first penalty in five years. Later on TV he appears to slip before striking the ball against the outside of the post.

The Leicester fans are still taunting the Burnley supporters who stand close by, as only seconds later Albrighton is haring into space down the right hand side. He puts in a peach of a cross that Duff can only slice up into the air. In what seems an eternity, 'keeper Heaton back pedals in slow motion to claw the ball back from the goal line, Vardy smashes the loose ball into the back of net, cue pandemonium in the visitors' enclosure. Not many supporters will have gone from experiencing your stomach churning to a moment of sheer euphoria within a minute of each other. 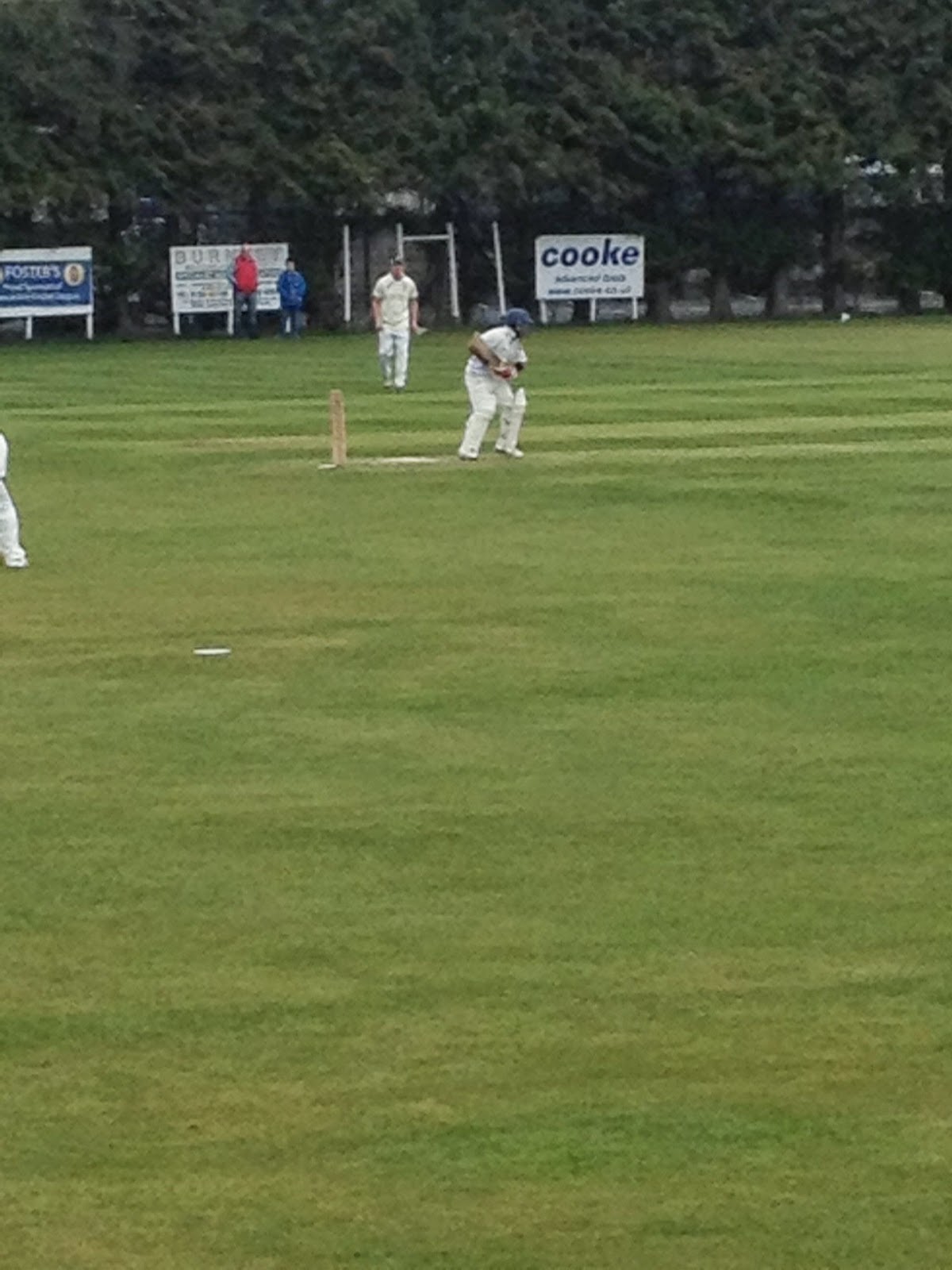 Leicester begin to knock it about, but Burnley aren't quite done yet. Ings twists and turns his way through the Foxes defence before unleashing a shot that Schmeichel beats away. A deflected Ben Mee effort wrong foots the 'keeper, but he still somehow manages to get a strong hand on the ball to avert any danger.

With the clock ticking away towards 90 minutes we make a sharp exit with two Leicester defenders laid-out in the box having collided as they desperately try to scramble the ball away. Wes Morgan is the standout defender for the Foxes. He has tackled, blocked and headed everything that the Clarets have thrown at him.

As I switch the car radio on, there is some good news for the town of Burnley. James Anderson has taken three wickets for one run with the new ball in the West Indies.

Man of the Match: Trumpy Bolton