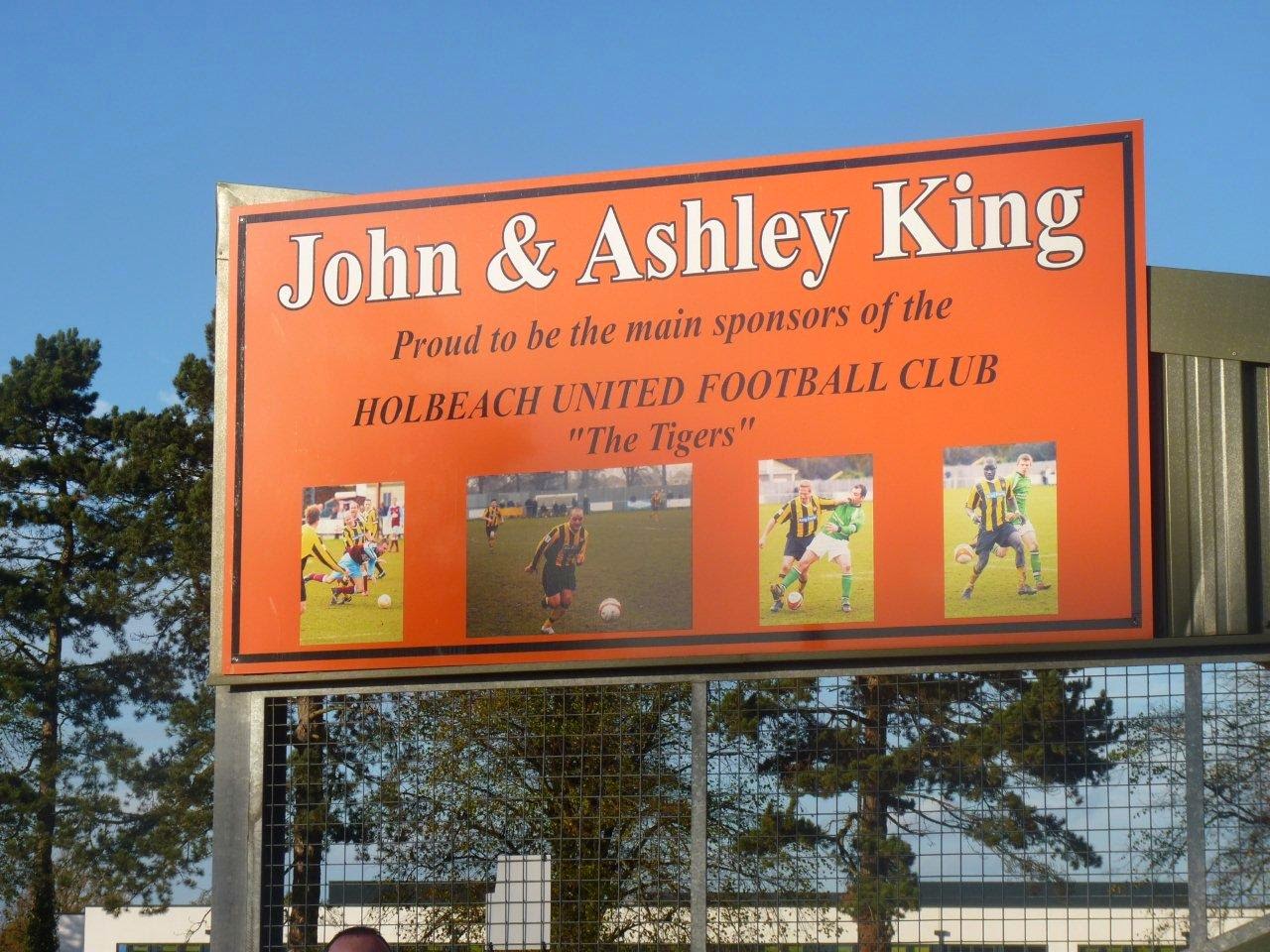 Gary Charles was a full back who played for Brian Clough's Nottingham Forest. He often used to make marauding, overlapping runs. He was probably ahead of his time. In 1992 his life was turned upside down when his car was involved in a traffic accident with a cyclist, who tragically died. The footballer was cleared of any blame. It haunted Charles, whose life spiralled out of control. He turned to alcohol, as his career began to plummet. Despite turning out for Aston Villa, Benfica and West Ham, his potential was never really fulfilled.

It was while serving a sentence for assault in Rutland prison that he received a letter from his old roommate Roy Keane, saying that he wanted to look after Charles. After being released from prison, Keane invited him into his family home and got him involved in coaching at Sunderland. He took his coaching badges and now coaches at the University of Nottingham, as well as being a part time scout. He has also remained sober for a number of years. See, Roy Keane isn't a bad guy, after all.

It's Friday night, Halloween, and the doorbell doesn't stop bloody ringing. I've dished out more sweets than Norris Cole. Enough's enough, Murphy the budgie is dispatched to the door handle and put on sentry duty. He should keep those pesky kids away for a few hours. 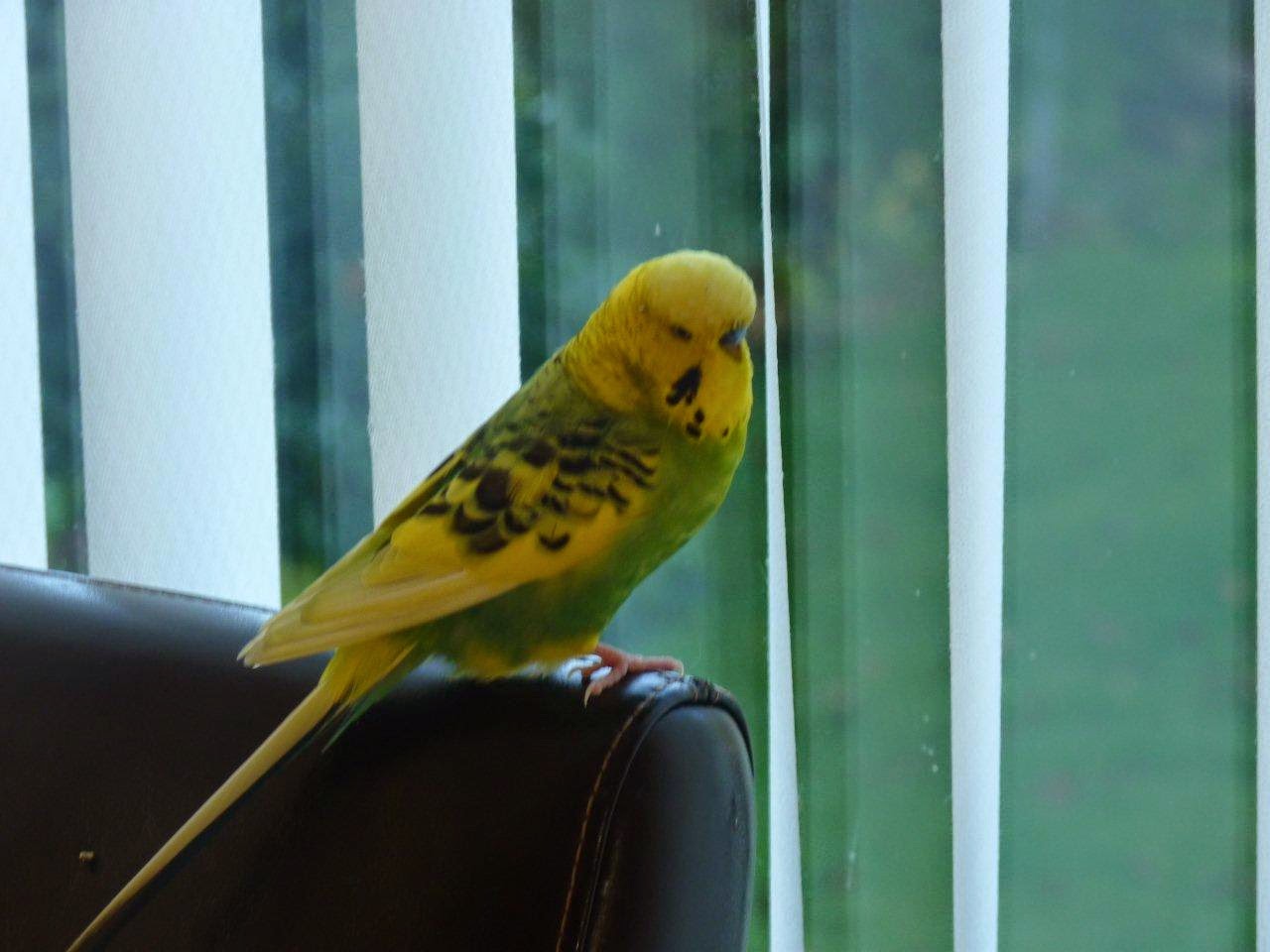 The wee man is whistling his little canary yellow and green head off in the morning to The Jacksons 'Show You The Way To Go.' He's celebrating Norwich City's 2-1 win over the Trotters from Bolton. We share some crumpets and Marmite, soaked in butter. Trumpy Bolton will be tucking into a bottle of Tanglefoot and nibbling on chicken liver pate on toast for his breakfast. Dr Murphy helps me check my blood pressure, which has been sky high of late. Tablets have helped it return to its normal levels.

I turn up Spinney Road on the Keyworth Bronx. I spot a couple of Jehovah's Witnesses chatting to an old lady on her doorstep. Trumpy will be giving them short shrift if they have the brass neck to knock on his door. Christ that sun is bright today, hang on a minute, it's not the sun it's Trumpy Bolton in his new salmon pink Slazenger polo shirt. If it had Chang emblazoned on it I would have mistaken it for the old Everton away kit.

Graham Norton is immediately switched off, Bolton can't abide the Irishman. He's soon unscrewing the top off his plastic bottle of cider, while reeling off tales of his recent trip to Newcastle to watch his beloved Leicester City. He's turned down tickets for the King Power Stadium today, to spend the day with Sticky Palms. Trumpy returned home from a bender in Nottingham last Saturday to watch Leicester take Swansea on at the Liberty Stadium. He switched over to Strictly when the second goal went in, as he said it was 'more entertaining.' 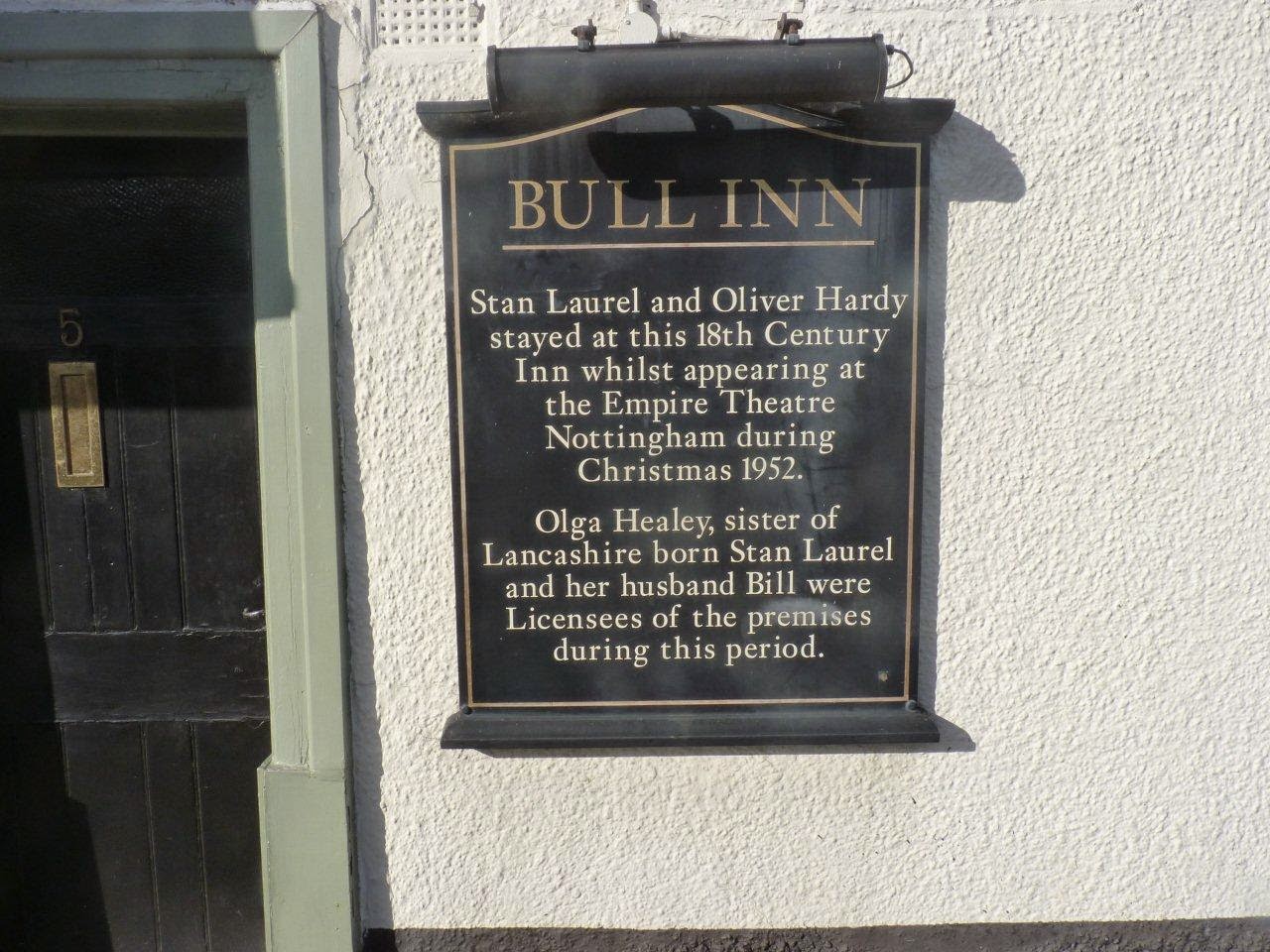 First port of call is the Bull Inn at Bottesford, so I can take a quick snap of a plaque on the wall, which commemorates Laurel and Hardy's overnight stay at the pub in 1952, when Stan's sister Olga was landlady at the pub.

We come off the A1 close to the Adult Store, as Bolton's eyes light up. He has a pub to tick off in the tiny hamlet of Burton Coggles. He sticks his head through the kitchen window and gets chatting to a chef who's preparing lunch. The boozer doesn't open until midday. We finally roll up at a soulless and characterless Marston's new build on the outskirts of Bourne. Bolton necks two pints of Brakespear's Oxford Gold. It's an apple and mango J2O for Sticky.

Trumpy's eagle eye has spotted a Ginsters van parked up in the garage across the road. The driver is an old colleague of his. They have a chinwag for ten minutes, before we jump back in the 'Rolls Royce' and head into Holbeach. 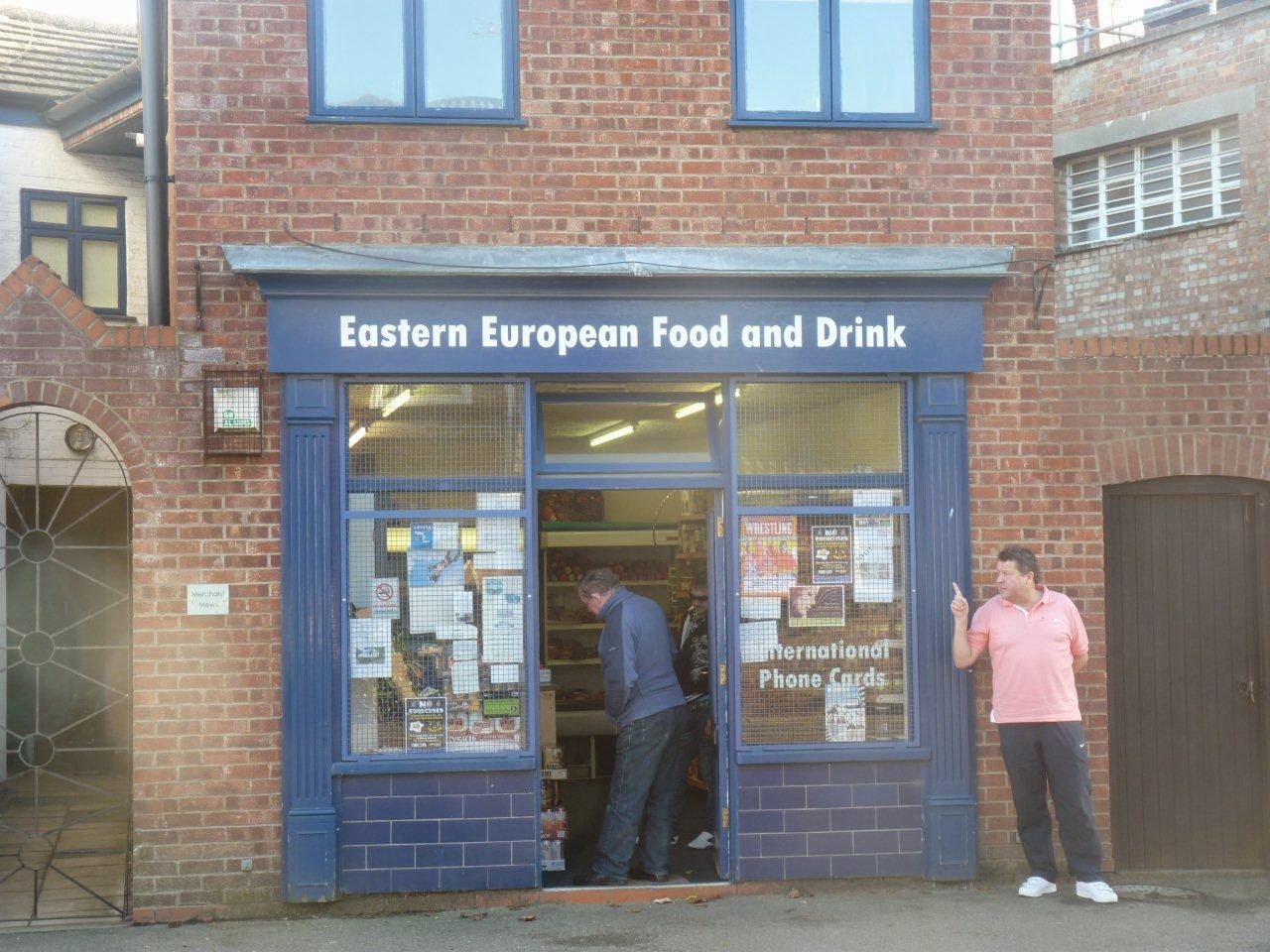 The old market town isn't easy on the eye. We park up outside Holbeach United's Carters Park ground. A gang of youths are congregated outside the Eastern European Food and Drink shop. One is swigging from a bottle wrapped in a carrier bag. He wouldn't last five minutes in a drink-off with Trumpy.

We grab a window seat in the cosy Horse and Groom on the high street. We both sink a pint of Gangly Ghoul ale from the Greene King Brewery in Suffolk. Bolton scoffs a burger, whilst I mop up with a bacon and brie panini.

A black lady wearing a flat cap, tight blue jeans and leather boots is settling her bill at the bar. Trumpy reckons it's Beyonce. 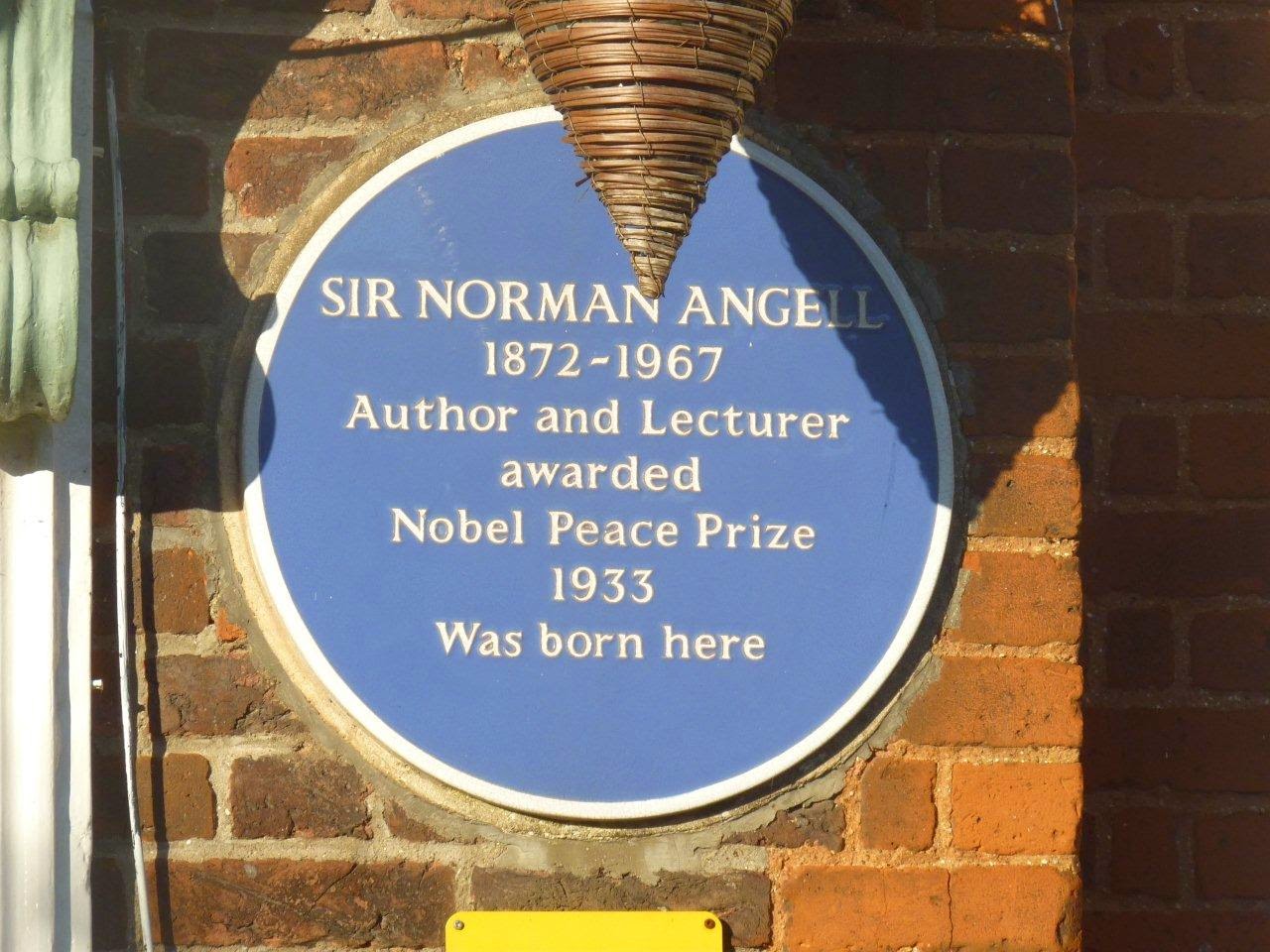 It's a short stroll back to the ground. It's a gorgeous autumnal day. We pass the house where Nobel Peace Prize winner Sir Norman Angell was born. Holbeach is a fenland market town in the South Holland district of Lincolnshire, with a population of 10,000. Former shot putter and the World's Strongest Man, Geoff Capes was born in the town. I thought it best not to tell Murphy that Geoff is now famous for breeding budgies.

It's £6 on the gate. I snap up a programme and a strip of raffle tickets. I'd been tipped by Ackers that the ground is a good un; it doesn't disappoint. Spectators are tight to the pitch. I leave Trumpy in the bar and head over to the far side of the ground. I pitch up next to the Holbeach dugout. Their manager Graham Drury is talking up their Vase chances. They are 40/1 to win the trophy.

There's still no sign of Bolton as the teams walk out to the 'Eye of Tiger.' The Tigers of Holbeach begin the game at a frantic pace. They are roared on by wind-up merchant Drury. The woodwork is peppered twice and a goal is chalked off for offside. Gorleston offer very little apart from danger at set-pieces. 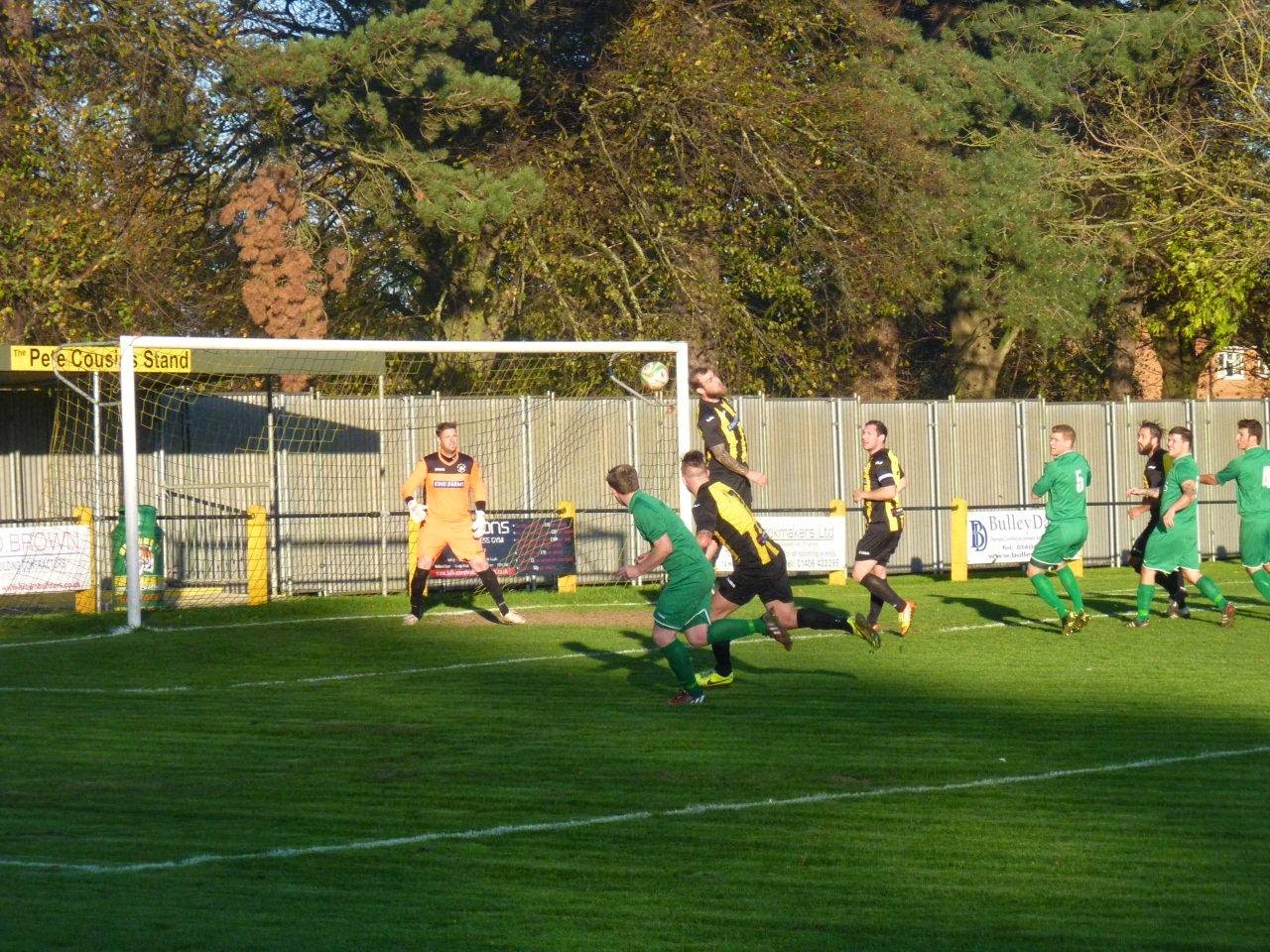 Trumpy has seen enough. He troops off back to the bar. The legend misses the opening goal of the game on the stroke of half-time, with a low left foot drive from Lee Beeson. I've had a little chat with The Gorleston Three and a Morecambe Town supporter from Spalding. It's the beauty of the Non League that you get to meet so many different people. I notice that Gorleston have had some famous players turn out for them in the past. Martin Peters, Dale Gordon and Robert Fleck are amongst them.

Holbeach are coasting in the second half. They score a beautifully executed goal through Jamie Clarke, after great work from raw youngster Lee Dube. Bolton fakes a groin injury when he clocks the female Tigers' physio. He's spent most of the second half chatting to Jake Duffy's Dad, who is from Leicester.

Man of the match: Roy Keane
Posted by Sticky at 4:30 PM