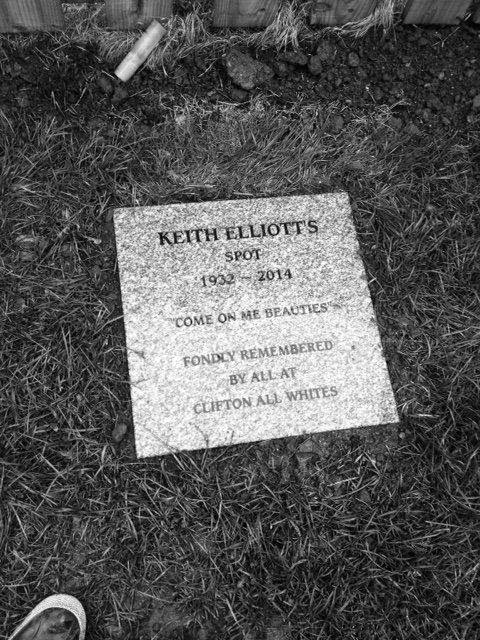 You never know what sort of journey a Non League player may have taken. Last week I visited Halesowen Town. In 2008 they snapped up a winger who had been released from Wycombe Wanderers called Ikechi Anya. On Friday evening, in a European Championship qualifier, the 26 year old terrorised Republic of Ireland and Everton full back Seamus Coleman in front of a full house at Celtic Park. Six years earlier he'd been stacking shelves in a supermarket.

I'm in a vile mood on Saturday morning. I've tossed and turned for most of the night. I'm tired and tetchy. Murphy the budgie is subdued and Finley the rabbit has a poorly eye. His crap non league tip is that whatever game I choose will be 2-2. The fool hasn't got one right in 8 years.

I drop 'The Skipper' down at Clifton All-Whites; his under 18 team are entertaining Leamington BS in the Midland Junior Premier League. I drive back to Ruddington and nip into the Co-op to get some cash. The heavens open outside, it's siling down with rain. It's deja vu from last Saturday. I play about on my twitter. The till girls will think I'm stalking them. They won't have the gall to ask me to leave. I propped up the Keyworth Co-op branch for years, buying endless special offer Argentinean Malbecs (not in 1982) before its sad demise. 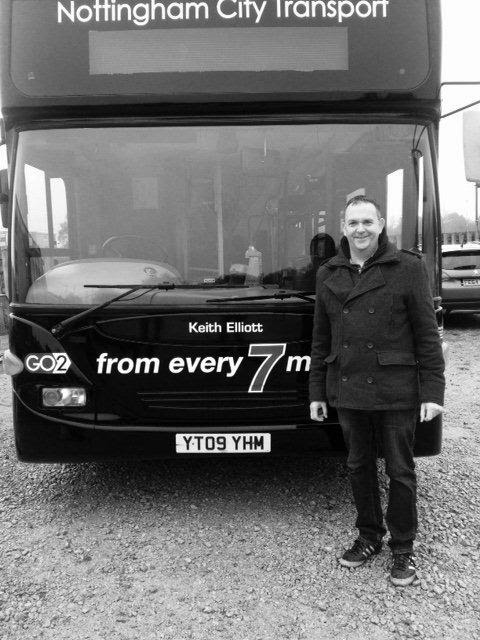 Clifton are bloody awful in the first half and are 3-0 down at the break. I bump into legendary First Team manager James 'Tosh' Turner. He looks the business in his Norwich City managers coat. His best buddy is former Newcastle, Leeds and Man City striker Darren Huckerby, who was released by Notts County at the age of 16. A monumental clanger, that was. 'The Lincoln' reaped the benefits.

Tosh is going through his texts in the Clubhouse. An anonymous one arrives asking him to collect his laptop that is cluttering up the doorway of Gino's Ristorante Italiano in Church Street, Ruddington. It's an eatery that King Billy Davies and his cronies used to eat at. Tosh is baffled by this. It must have been a heavy session last night.

This great Club, who have been magnificent with my boy, are holding a memorial today to remember club stalwart Keith Elliott. They have named a bus after him and are also unveiling an engraved stone later today at spot he used to stand at each week. I meet indie rock legend Jake Bugg's cousin. He's slightly out of tune, but seems content in his pushchair. 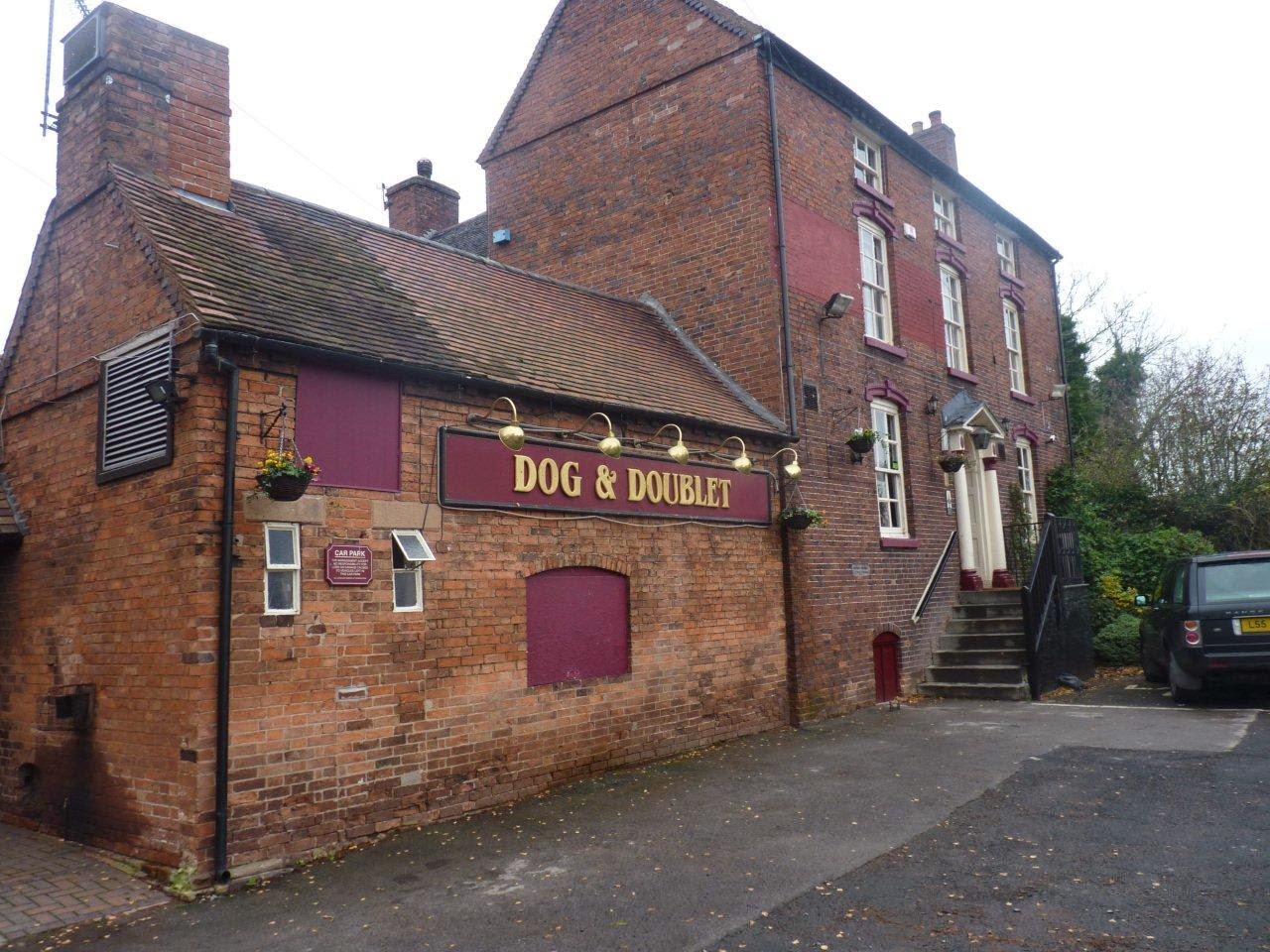 Bloody hell, Tividale's game against Brigg Town has been hosed-off and has bit the dust. It's a toss-up between Lichfield Town and Nuneaton Griff. It's gloomy, dank and dark as I speed up the M42. I've clocked a hostelry in the Good Pub Guide in the village of Coleorton, in north-west Leicestershire, called the Kings Arms, that needs ticking-off.

I walk into the bar. Buster Bloodvessel is banging out 'Special Brew.' Talking of brew, there are five real ales on show. I'm rubbing my hands with glee. Three locals are chatting bollocks at the bar. I wait a full five minutes; there's not a sign of any member of staff. I do an about turn and storm out the pub. I'll give em pelters on Trip Advisor later.

I search the net for decent boozers off the M42. I find a brilliant website that recommends The Dog and Doublet in Bodymoor Heath, close to Aston Villa's training ground. It's a wonderful old building on the canal, with an interesting interior. Meg Richardson from the Crossroads Motel serves me up a cheese sandwich and a pint of Wainwight. Even the Phil Collins music doesn't put me off. 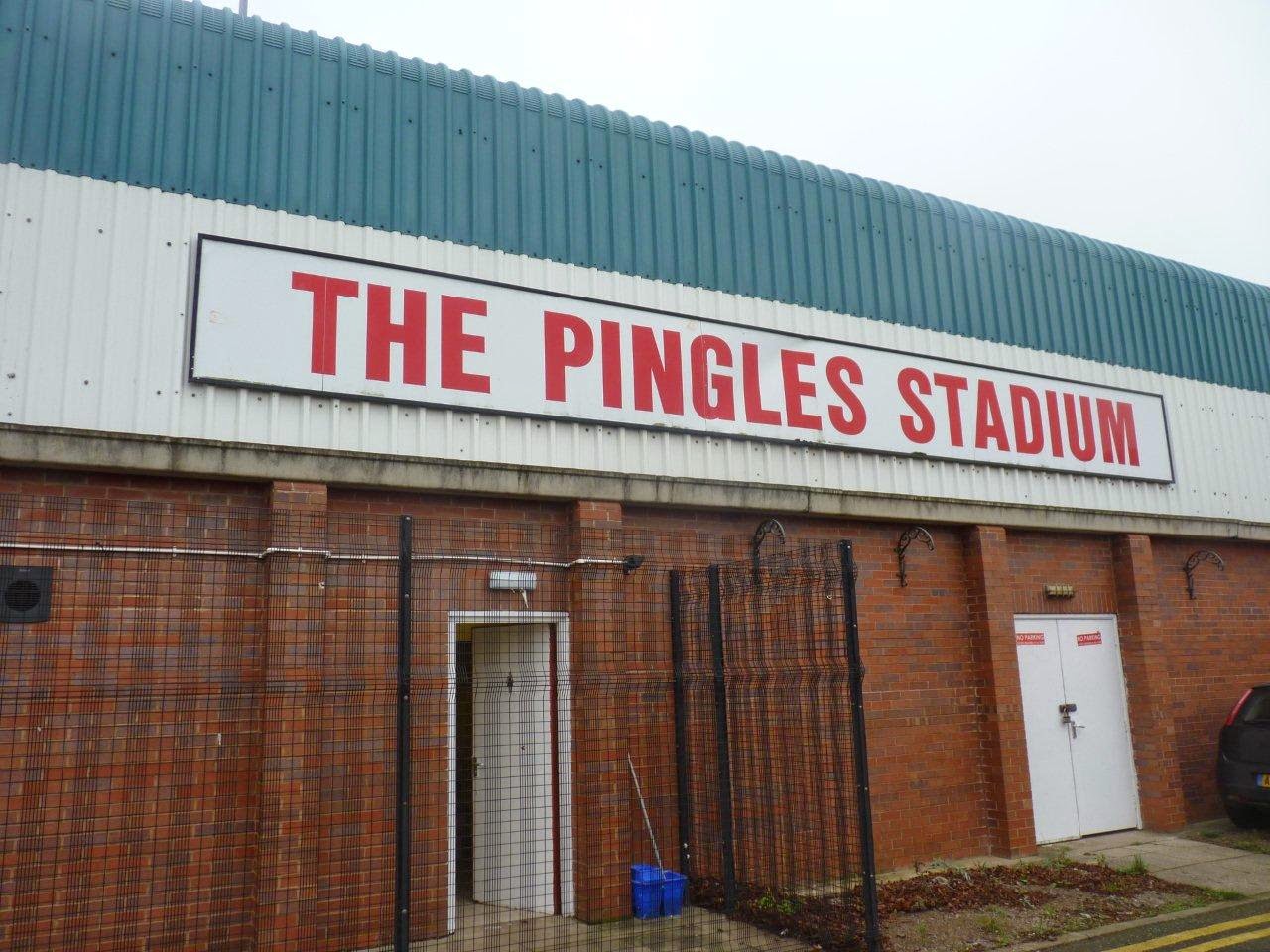 Lichfield Town haven't replied to my tweet, while Nuneaton Griff have: Nuneaton it is then.  Nuneaton is a town with a population just shy of 80,000 in the county of Warwickshire. Due largely to munitions factories, the town suffered from heavy bombing by the German Luftwaffe in the Second World War. On the 17th May 1941 100 people were killed, 380 houses destroyed and over 10,000 properties damaged.

Tom Tom comes good for once and safely navigates me to the Pingles Stadium on the outskirts of the town. I look across at the ground as I step out of the car. My hearts sinks. There's an eight lane athletics track running around the perimeter of the pitch. Hopper doesn't do grounds with running tracks. Oh well, it's a tick-off and they replied to my tweet. 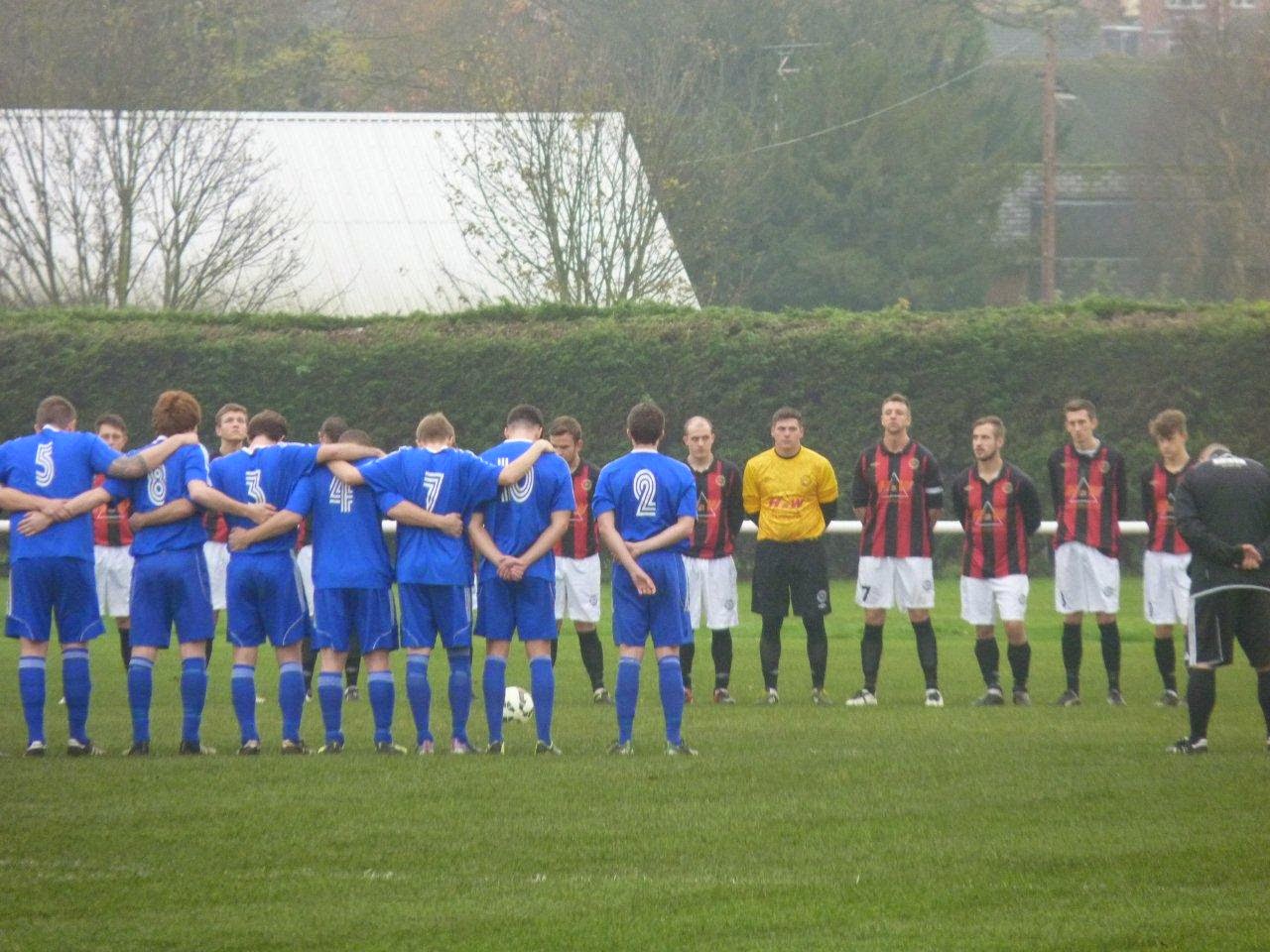 It's £4 on the turnstile. The programme is a good un for a quid. I'm pounced upon by a raffle ticket seller and buy a strip for a further £1. I should have brought my bloody binoculars, the pitch is that far away. The Maxwell House coffee is not helping at 50p a shot.

I getting gassing to a referees' assessor. I find these guys, as a rule, secretive and unsocialable. This chap opens up a bit. I enjoy his company and tell him I'm a fully qualified ref. I can hear some music booming out of a sound system in the changing room. The minutes silence is ruined by a guy in the park adjacent, letting his petrol driven remote control car noisely run up and down a grass bank.

The game is open and the standard of play surprises me (Step 6). Uttoxeter force a good save from the 'keeper and see an effort bounce off the woodwork.The Heartlanders take the lead against the run of play. The visitors score twice on the stroke of half time. 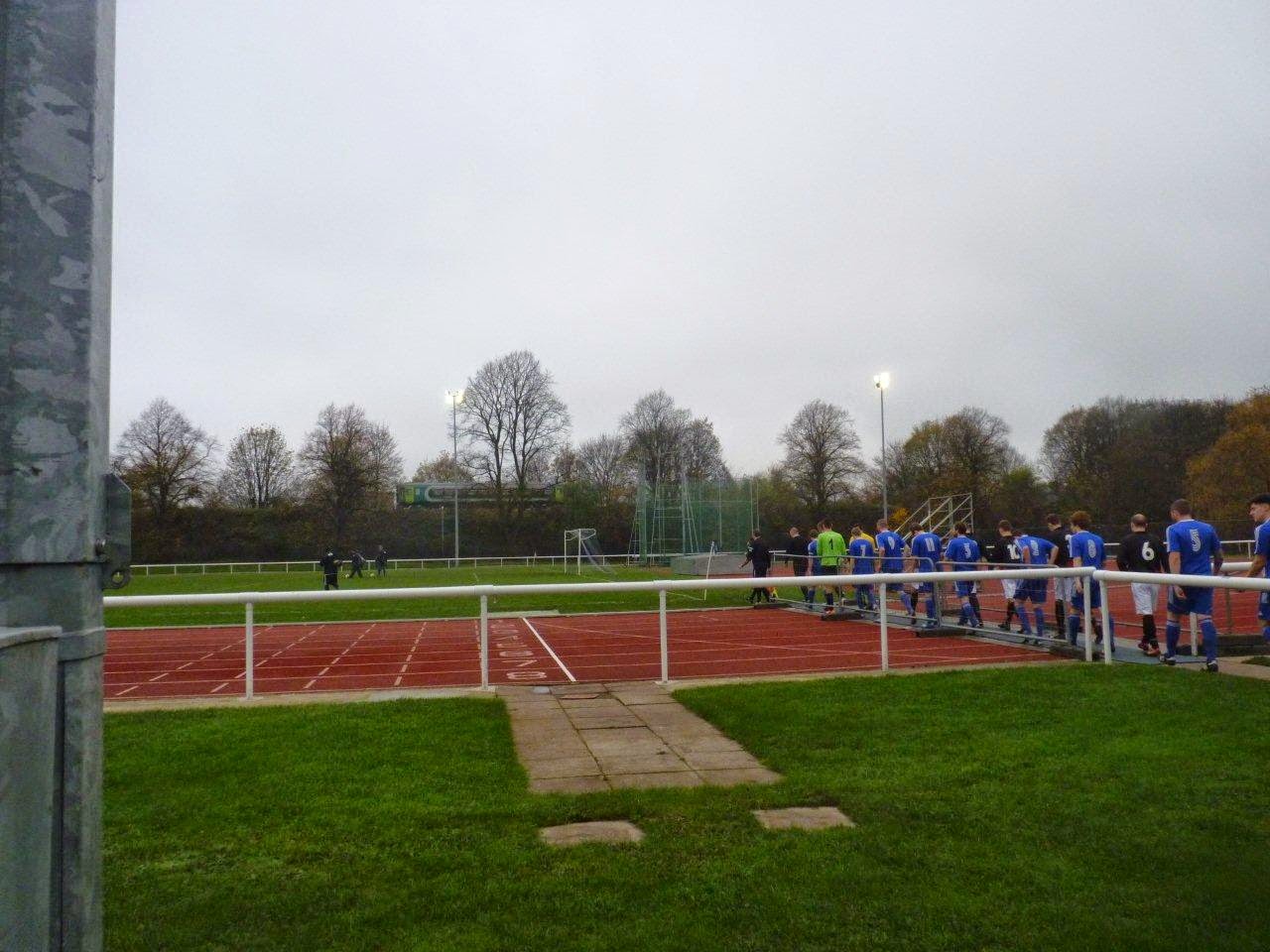 I notice that Notts County are up the road at Coventry City's Ricoh Stadium. Northern Ireland 'keeper Roy Carroll is playing his second game in 24 hours. Lincoln City's game at Eastleigh in the Conference has been postponed due to a fire at the Imps' hotel, stopping them from collecting all their kit.

Uttoxeter, buoyed by their two quick strikes, start the better. They increase their lead but are soon pegged back to 3-3. Nuneaton Griff have been magnificent and are worth the draw. There's a a game -changer with 20 minutes to go, Griff's 9 jacket is stupidly sent off. He kicks out at the corner flag as he sulks off to the changing room. Uttoxeter seal the game with a brilliant left footed strike and an injury-time close range finish. 10 jacket for Griff has worked his socks off but teenager Ollie Richie has caught my eye, as well as Football League scouts, I'm led to believe.

The game has been breathtaking, and I for one will re-visit this League sooner rather than later.

Man of the Match: Ollie Ritchie