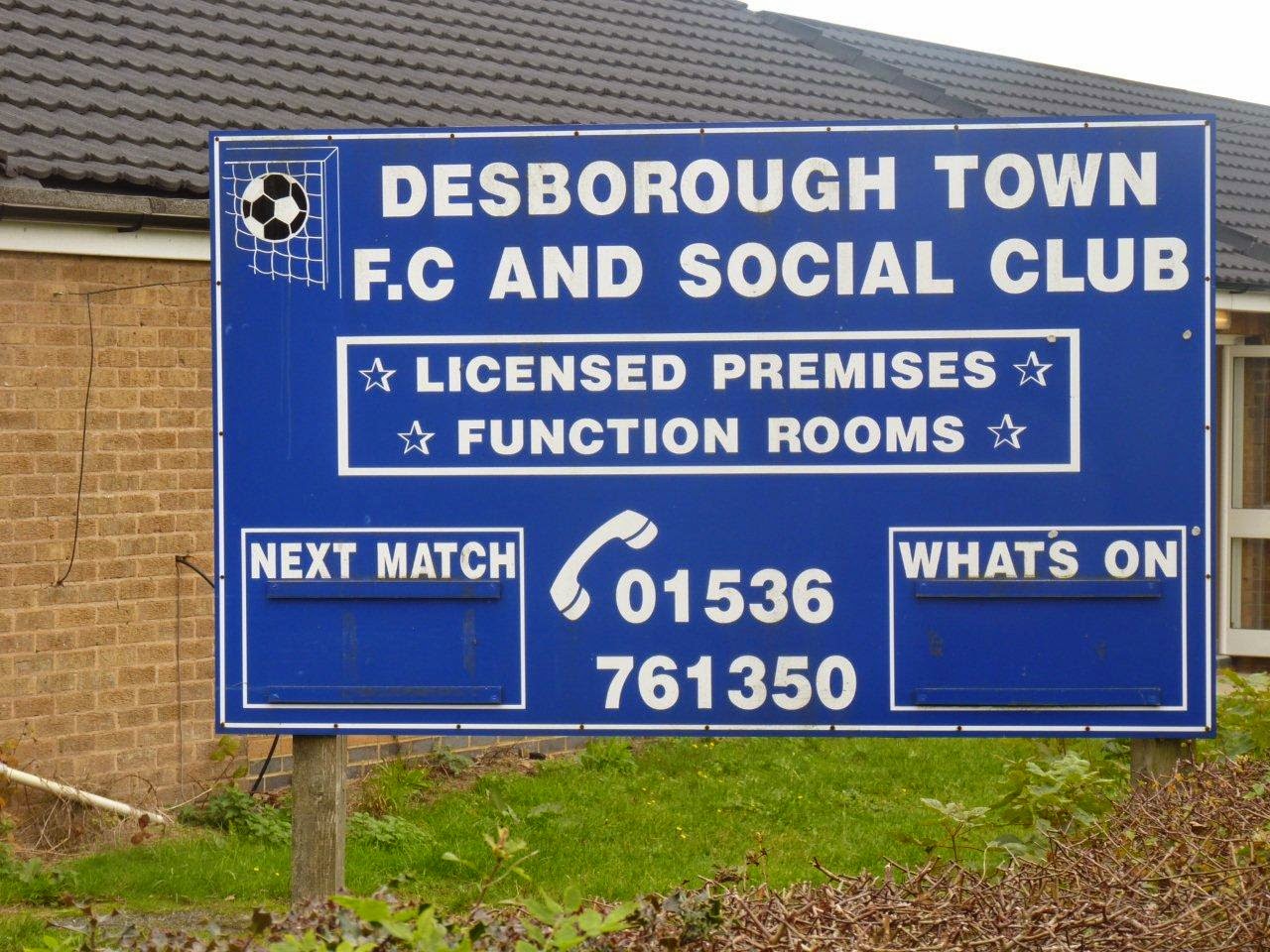 It's a miserable Monday lunchtime. I'm sat in the 'Rolls Royce' on an industrial estate in Loughborough. It's pelting it down with rain as I nibble on my cheese and ham sandwich. I'm scrolling through my twitter timeline as I listen to the Jeremy Vine Show on Radio 2. The BBC has just released results from a Price of Football Survey. I hear Vine bleating about Kidderminster charging £4.50 for a pie. I bet the fool has never even been to the Aggborough to sample it.

Ackers and I were guests of honour at Kidderminster Harriers v Cardiff City for a League Cup tie ten years ago. We were doing a tour of 108 grounds in England and Wales for charity. At the time it was £3 to buy this cottage pie that Vine is moaning about. It's the most famous delicacy in Non League football. Nigel Clough always ordered 20 portions for his Burton Albion players and staff each season for the coach journey home. I tweet Vine to redress the balance. He reads it out just before the one o'clock news. It cheers me up for the rest of the day.

I spent the other Tuesday night in the company of my good friend Jon Garton at Heanor Town, who were playing high-flying Tadcaster Albion. Nearly 280 folk turned out on a mild evening to watch a bruising encounter. Former Manchester United, WBA and Nottingham Forest midfielder Jonathan Greening played for Tadcaster. His brother Ricky is leading scorer for Albion in the Northern Counties East Premier League. The visitors deservedly won 2-1. 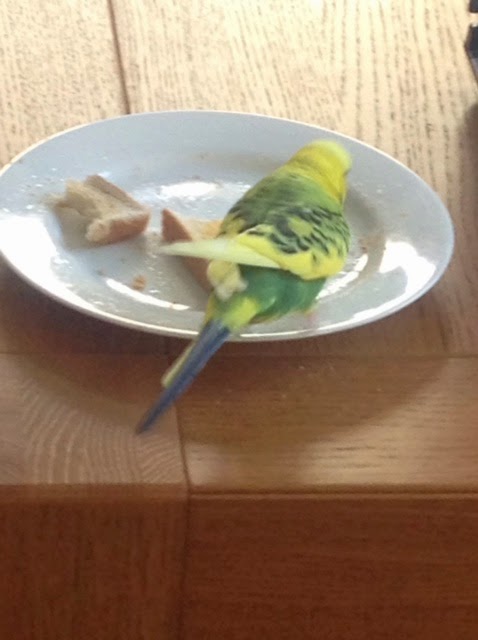 I'm reading a cracking book written by the journalist and author Charles Nevin, it's called 'Lancashire, Where Women Die of Love.' There's a chapter on the town of Ulverston, where Stan Laurel was born. Nevin mentions a pub in Bottesford on the Notts/Leics border that was run by Stan Laurel's sister Olga. Laurel and Hardy stopped the night there in 1952 before appearing the following day in Nottingham. There's a plaque on the wall that Trumpy Bolton and I will be driving over to see next Saturday, on our way to Holbeach for a FA Vase cup tie.

I'm struggling to come to terms that I no longer scout for Notts County. It was my decision, but Saturday mornings feel empty without meaning. I stumble upon Sooty's magic wand while I'm rummaging in some drawers. I break down in tears. I didn't mean to leave Sooty in the toilets in Guiseley. I hope he's okay.

Comedy genius Sticky jnr cheers me up with his attempts at rustling up a cooked breakfast. "Dad, how do you crack an egg?" I don't think James Martin needs to worry about his job on Saturday Kitchen. Junior has a big cup tie in the village of Underwood this afternoon, where the author D H Lawrence set many of his books. Murphy Palmer the budgie mops up some Marmite on toast before I dash out the house. 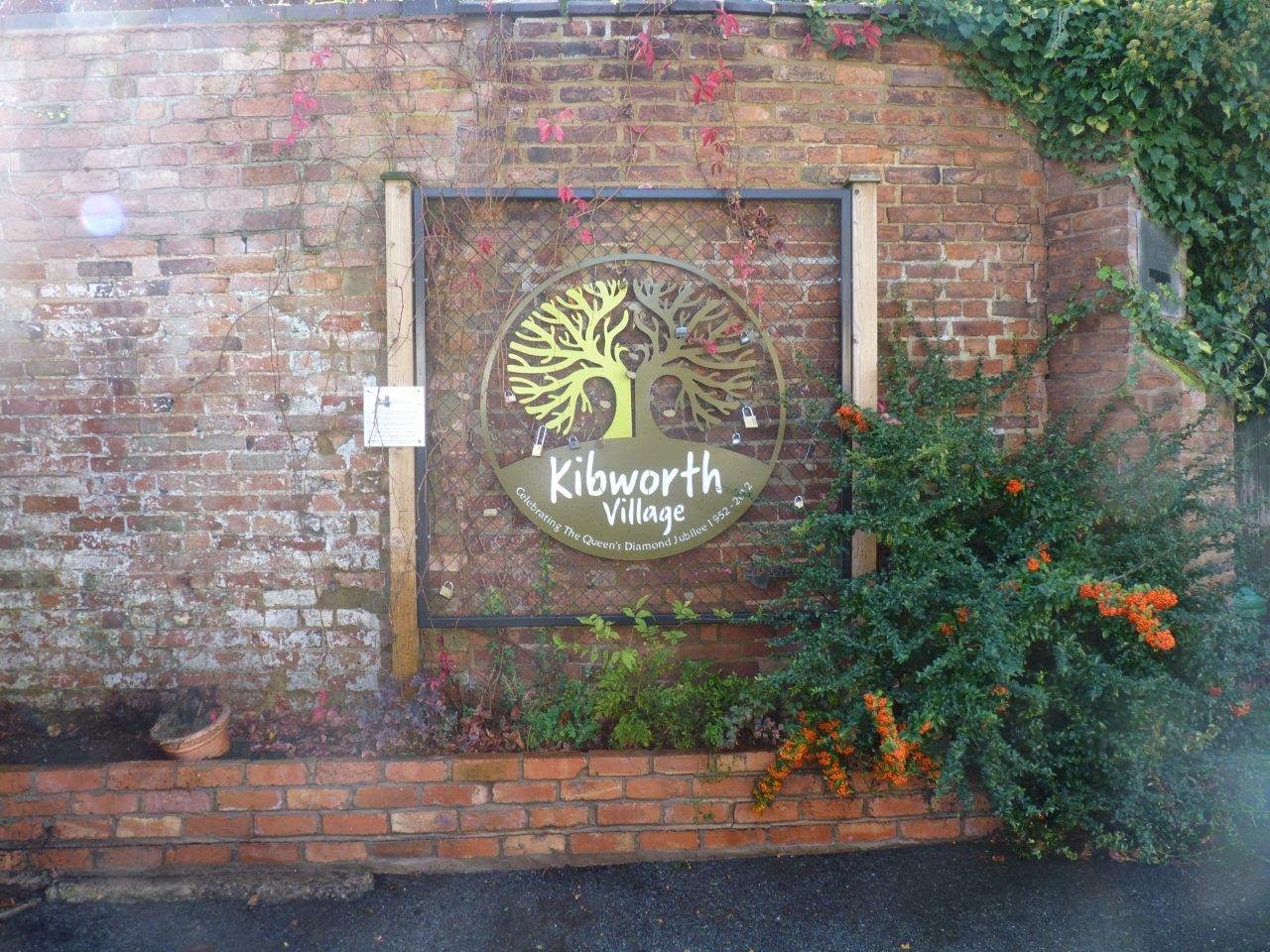 My mate Phil picks me up for the trip to Desborough. The Graham Norton Show is on the radio. Ultra Nate's 'Free' is blasting out the car stereo. Tom Tom takes us off the M1 at Fosse Park and onto the ring road. We pass Everards Brewery. I close my eyes and daydream about necking a pint of Sunchaser or Tiger.

I clock a sign for Aylestone Leisure Centre. Aylestone Park is a football club that former Leicester City striker and Match of the Day presenter Gary Lineker started his junior football career at before being spotted by the Foxes. We're soon on the A6 entering the village of Kibworth Beauchamp. We swing a right into the the Coach and Horses car park, which is being power washed by a young, disinterested lad.

We're treated like royalty by the landlord. I saw a few negative reviews on Trip Advisor. I'm only here for the beer. I down a pint of Wainwright from the Thwaites Brewery in Blackburn. We sit in the cosy bar. Tony Blackburn's Pick of the Pops is playing songs from 1972. The best by a country mile is 'Backstabbers' by The O'Jays. A bacon and brie sandwich and a basket of chips is a steal for £5. 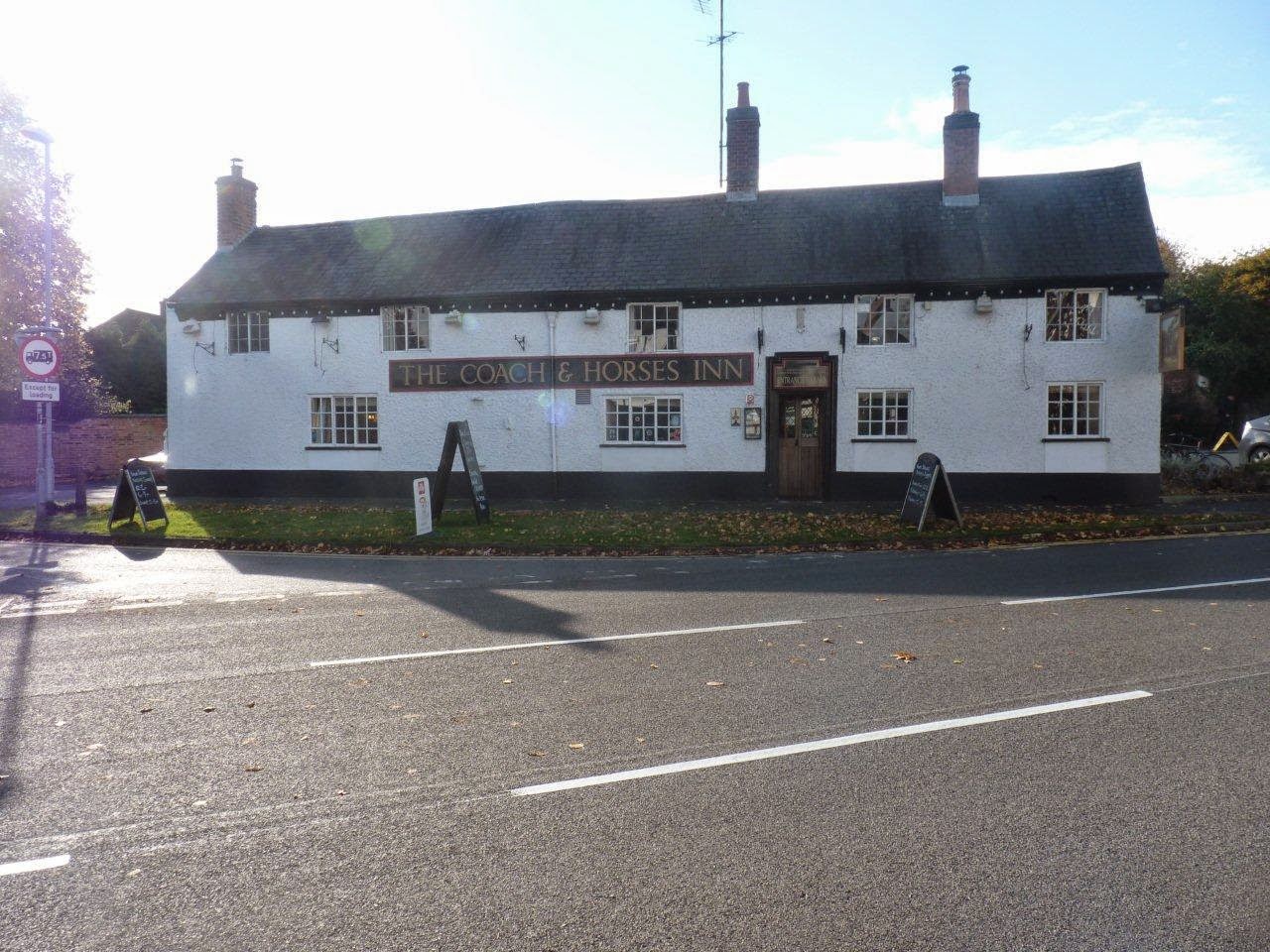 Desborough is just over the Leicestershire/Northants border. It's between the towns of Market Harborough and Kettering and lies in the Ise Valley. It has a population of just over 10,000. We park across the road from a Co-op. The Desborough Co-operative Society was founded by local men in 1863. Sticky Palms loves the Co-op.

It's a short walk to the ground. It's £5 on the gate. I stump up £1 for a raffle ticket. I should be in with a shout, as I'm not expecting too many to show up today. The ground has seen better days, but this is what attracts me to it. It has low level cover behind the goal and up the nearest touch line. The Social Club is tucked away outside the ground. The old clubhouse was destroyed in a blaze back in 2008. It had a viewing gallery above the pitch. It has bags of soul and character. 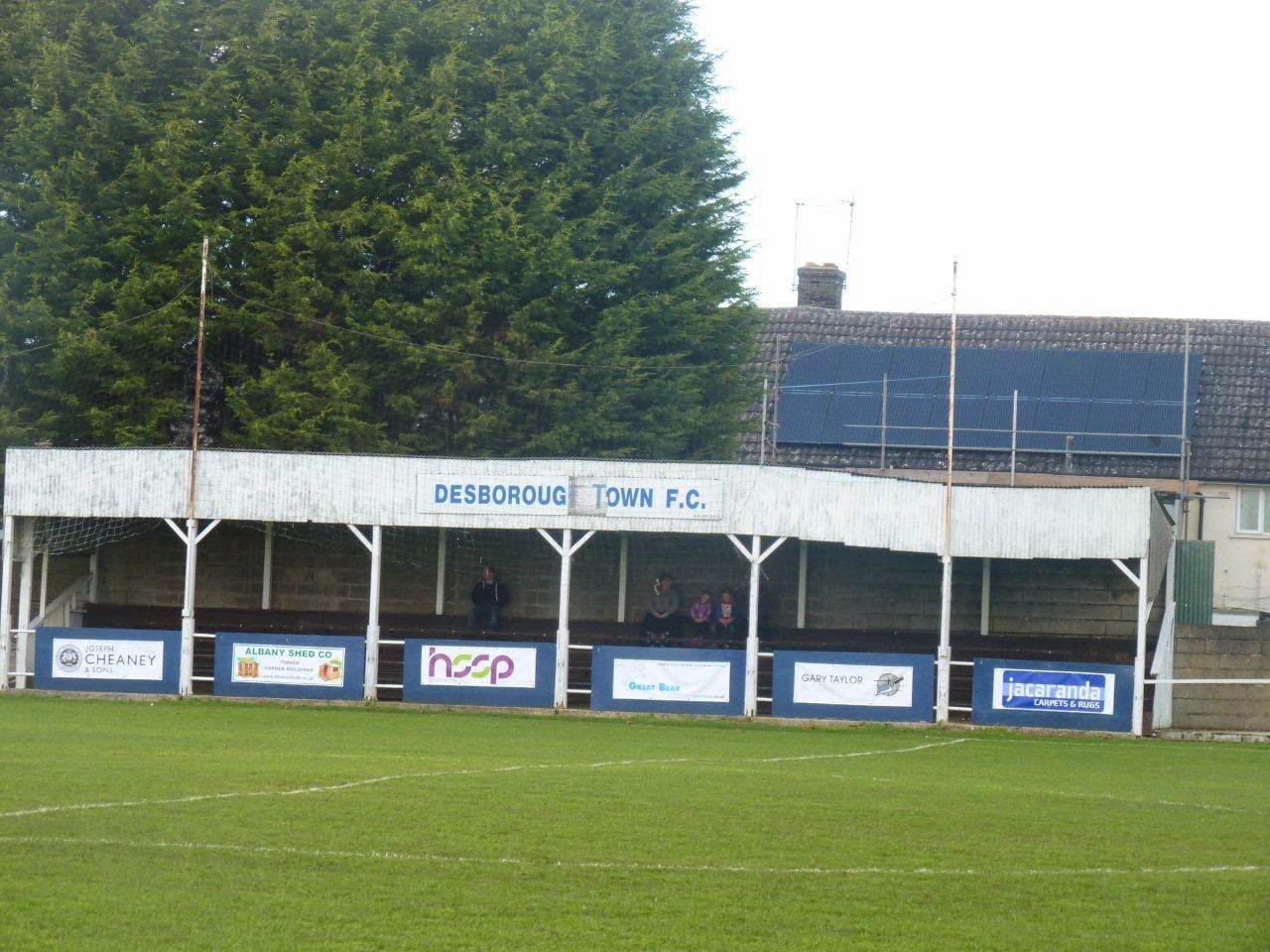 The poor old PA guy is suffering a nervous breakdown. He plays a Boyzone CD and leaves it running. It's the first time I've contemplated suicide since Lincoln City appointed Chris Sutton as manager in 2009. It's too late for a refund, the teams have kicked off. Both clubs are mid-table, although Desborough have played more games.

The woodwork is rattled at both ends as the match begins at a frantic pace. The visitors are wasteful in front of goal, as chances are spurned. A shanked clearance flies over my head and ends up in the undergrowth. Folk are looking round at me to fetch it. Chuff that, I've got my £40 black winkle pickers on from Gordon Scott up Lister Gate in Nottingham. 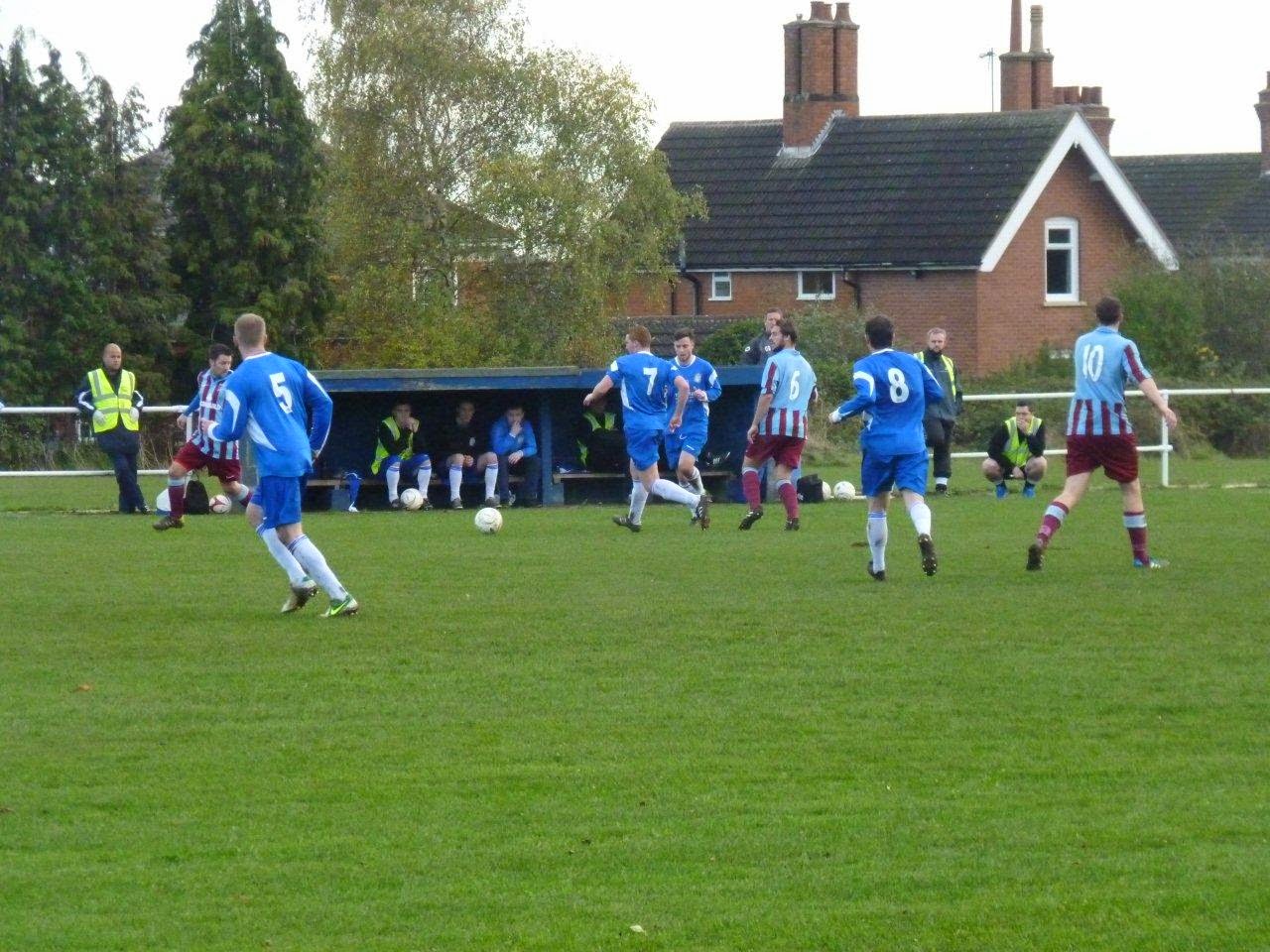 Deeping take the lead with a beautifully executed goal. I grab a bottle of water at the break and watch the highlights of WBA v Everton on Setanta Sports in the Club. I'm gutted not to have won the wine, chocolates or biscuits in the raffle, as I notice the winning numbers chalked up on a blackboard.

Desborough are terrific in the second half and totally dominate the game. Deeping rely on blocks, clearances, saves and the occasional counter-attack. I watch the final 15 minutes sat on a wooden bench in the stand. I've thoroughly enjoyed the game.

Man of the Match: Sticky jnr who danced his way through Underwood MW and D H Lawrence.
Posted by Sticky at 6:45 PM