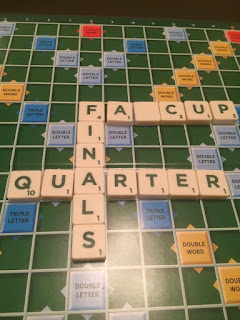 It's a Wednesday evening, March 31st, 1982. I'm stood on the 'Popular Side' terracing at Lincoln City's Sincil Bank with my dad, leaning against a red-painted crash barrier. Over 6,000 fans have rocked up to watch this Division 3 (old money) promotion tussle between the Imps and Burnley.

'The Lincoln' are 1-0 up with two minutes remaining. Dad announces he's off to the chippy on Shakespeare Street for a fish supper -  before they start queuing out of the door - he had a habit of leaving games before the final whistle. He's barely exited the stadium when a huge roar comes from the Claret and Blue Army. 18-year-old Trevor Steven has broken my heart by grabbing a late equaliser for Burnley. It effectively ends our promotion hopes. Burnley are soon crowned League champions. Trevor Steven goes on to win 36 England caps. In 1987 the Imps are relegated, out of the Football League. Burnley finish a point above us. "Funny old game Saint."

35 years later and I'm heading up to Burnley on the M6. Ms Moon is riding shotgun. I'm still devastated by the death of my little budgie, Murphy Palmer, last weekend. I named him after legendary City manager, Colin Murphy, who was in charge that night, 35 years ago. 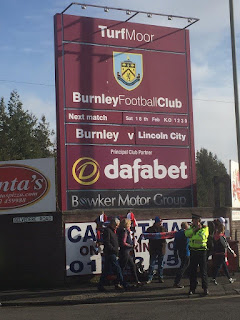 It's like having a driving lesson when Ms Moon is in the passenger seat. A few words are exchanged in the lorry car park at Lymm Services just off Junction 20. We swap seats. The next few miles are driven in silence. The only voice to be heard is Sir Tim Rice on Radio 2's Sound of the 60s show.

Murphy the budgie died of a broken heart - regular readers of this blog will concur with this statement. 24 hours before his death, news was leaked of Brian Matthew's unceremonious sacking by Radio 2's programme controller. Murph worshipped Uncle Brian. He even used to send him birthday cards each year with a green and canary-yellow coloured feather placed in the middle of the card. He'd drop them off at 'Wogan House' before the 120-mile flight home.

Following peace-keeping negotiations, that Kofi Annan would be proud of, speaking terms are resumed in McDonalds at Blackburn and Darwen services. Ms Moon grabs a much-needed coffee, whilst I have my annual Big Mac meal. 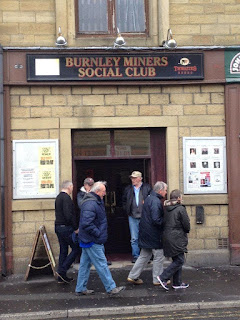 Burnley town centre is gridlocked as 'The Lincoln' and a convoy of coaches roll into town. We stick the Audi in a car park at £4 per pop down Plumbe Street. We wander past Burnley Miners' Social Club. I need a pint to settle my nerves. But have to say that they don't look particularly welcoming on the door. 20 members of the Burnley hooligan firm the 'Suicide Squad' were jailed in 2014 following a melee in the Club.

Burnley is a market town with a population of 70,000. It was a prominent mill town during the Industrial Revolution. Its local brewery is Moorhouses, which was founded in 1865 and whose award-winning brews include the Pride of Pendle. 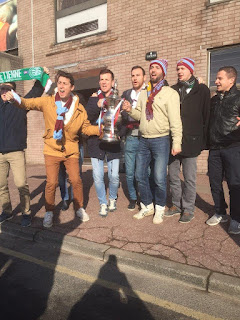 Burnley were founded in 1882 and are a founder member of the Football League. They won the old Division One in 1960 and were European Cup quarter-finalists in 1961. Highest transfer fee paid out is £13 million for Norwich City's Robbie Brady (Murphy the budgie was quite cross about that one). Highest transfer fee received was £7 million from Southampton for Jay Rodriguez. The youngest player to have represented the Clarets is legendary striker Tommy Lawton.

I'm already a jibbering wreck as we join the crowds strolling towards Turf Moor. My anxiety is heightened knowing that once again, during this Cup run, we'll be sat with the opposition. We pass a group of Burnley supporters from France who look to be parading the FA Cup. It was £10 for the ticket (thank you so much, you know who you are). I'm delighted to see we are seated adjacent to the Lincoln end. 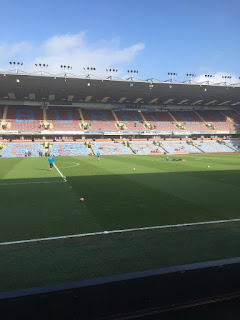 The DJ is on flames as he plays the Stone Roses and 'Reward' by the Teardrop Explodes. They know how to build up a game in the North. I chance upon the guy who got us the tickets and express our gratitude. Ms Moon is being chatted up by a steward, who asks her whether she has been skiing, when we've actually just returned from Tenerife.

The turnaround in Lincoln City's fortunes is remarkable and down to two men - former PE teachers Danny and Nicky Cowley. They've tinkered with the side - only three out of the starting eleven are Cowley signings, but boy oh boy are Sam Habergham, Sean Raggett and Alex Woodyard vital cogs in the Lincoln engine room.

We both like Burnley and particularly their manager Sean Dyche. We had the pleasure of being in his company up at the Hand in Heart, on Nottingham's Canning Circus. The guy was first class and just wanted to reminisce with Ms Moon about pubs back-in-the-day in Nottingham, as Dyche was once an apprentice at Nottingham Forest. 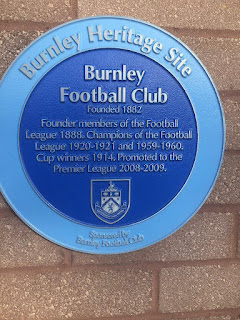 My stomach churns, my spine tingles and my nerves jangle as the teams emerge from the tunnel. We're sat with the 'Darby and Joan', so don't anticipate any issues. The 3,210 travelling Imps are housed in the David Fishwick Stand. They're in fine voice; easily outsinging Burnley.

Jack Muldoon spurns an early chance, ballooning his effort over the bar, following good work by the dangerous Nathan Arnold. Lincoln match Burnley all over the park, although the Clarets have the clearer chances. We take 0-0 at half-time. Someone remarks on my facebook page that Sticky doesn't do 0-0s - I'll chuffing well settle for one today. 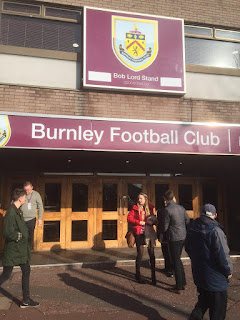 The highlight of half-time is a little lad behind me using a plastic knife to draw a smiley face in his Hollands pie before demolishing it. He's quite sharp for a little 'un. Lincoln fans sing "We're top of the League." The boy replies, "Yeah, top of the Non-League." He particularly enjoys the 'No They Never No More' song, referring to Blackburn Rovers as "Bastard Rovers."

Joey Barton is up to his usual antics in the second half. I'm not sure who he has bet on to win the game. He has more than met his match in Lincoln Heavyweight Champion Matt Rhead, who has terrorised the Scouser all afternoon. A deserved booking comes his way, after shoving Top Valley boy Terry Hawkridge in the face and trying to con the ref into red-carding Rhead. Barton's legacy will be being remembered for stubbing out a cigar in a colleague's face and for the cowardly assault on a teenager in a Liverpool street, resulting in a six-month prison sentence.

Burnley striker Andre Gray is having one of them days - he couldn't hit a cow's arse with a banjo. He scuffs, shanks and balloons shots high, wide and handsome. Lincoln have gone toe to toe with Burnley, a team who have the best home record in the English leagues. 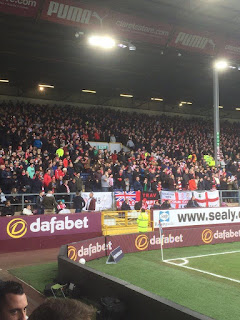 The game is in the dying embers when City are awarded two corners in quick succession. The second one from Sam Habergham is pinged towards unmarked Imps' skipper Luke Waterfall, who is stood within what appears touching distance from Sticky Palms. Waterfall heads the ball back to the far post. The next passage of play appears to be in slow motion as Sean Raggett nods the ball over Tom Heaton, with the 'keeper appearing to claw it back from behind the line. I lean forward, hand over mouth, I feel the flood of tears filling my eyes. I look at the Ref, he looks at his assistant, before awarding a goal. Ms Moon's mouth is wide open, her face frozen. It's like when you get a phone call to say a close relative has passed away - it's just total shock. I bury my head into Ms Moon's shoulder. I'm shaking and crying my eyes out. Even worse, we've been rumbled by the 'Darby and Joan Club.'

They're not robbing me of my moment of glory. We remain silent, dignified and respectful. Burnley's fans are leaving in their droves, with hushed tones. City are magnificent in the final five minutes of the game; it's pure theatre as Burnley pepper the Lincoln goal. Special mention must go to Waterfall and Raggett. They deal with everything that's thrown at them. Towering headers, shuddering challenges, with the heart and courage of lions - how on earth are these boys playing in the Conference?

The final whistle is blown. I can't take it in and I'm shaking like a leaf. Fair play to the Clarets fans, many stay behind to clap the Lincoln players off. I break down in tears in the car park. It's too much to take in. Who says the FA Cup is dead ?

Man of the Match: Team Lincoln

Well written, and the passion of the occasion comes through well. I was also in the crowd but my experience was polar opposite, I'm still recovering now. Sincere congratulations to all you Imps, you were fantastic on and off the pitch (apart from the unnecessary German bombers rendition, hoped I'd heard the last of that). Good luck in the quarter final and in gaining promotion, and just savour the moment. Enjoy!

30 years ago, Burnley survived by winning on the last day of the season and sent Lincoln City down...I'm a Claret through and through, but I also believe in the ying and the yang. As followers of the so-called "Unfashionable Clubs", we know that days like yesterday are to be savored and you deserved everything you got. Best of luck with the promation push...

CaspertheClaret - wasn't there yesterday (watched it on the box). I was there when we got beaten by Wimbledon all those years ago. That was horrible. My memories of that were just constant Burnley pressure but unable to score and then one sickening blow! Yesterdays game wasn't like that, you outdid us at our own game and fair play to you for that. It wasn't pretty but who gives one. The majority of the big boys have left the Turf whining about our negative approach but you reversed that and march onwards. Good luck in the next round. I would love you to beat those whining Gunners (if they get past Sutton) - Hope the rest of the league campaign goes well.

Fair play to Lincoln. They deserved it and played the same way that we have been playing all season. Good luck with promotion and beyond. With a manager, team and fans like that you have a long and happy road ahead. Thanks also for the complimentary words about Burnley. We are in a good place too for the same reasons.

Massive congratulations to Lincoln city. Most of my fellow Burnley fans agree that you out Burnley'd Burnley. You deserved everything you got. Credit to the Cowley brothers and the amazing support you gave your team. Savour it, lap it up. You're in with the big boys now and hopefully you can give them a bloody nose and get to Wembley. I'll certainly be supporting you. Good luck with your promotion push. You've earnt all the plaudits coming your way. Well done.