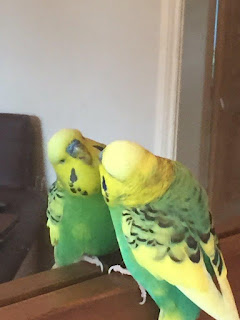 It's Saturday February 4th at 04:30 am. I jump in the shower and scrub up, before flicking on the kettle for a brew. Murphy the budgie has already been transported to his Auntie Val's for a week's holiday, although he's not too chuffed about the 'broccoli shortage,' I knock Ms Moon up for our early morning flight to Tenerife. The journey to East Midlands Airport is silent apart from the dulcet tones of Chris Hawkins on Radio 2. The good lady can be a tad grouchy without her Costa Coffee fix.

I lug the suitcase across the tarmac from a nearby business park. It's flipping freezing and all I'm sporting is a short-sleeved shirt. We breeze through the Thomas Cook check-in desk and a minuscule queue in security. We wolf down a bacon and egg cob and down a much-needed coffee in Frankie and Benny's. 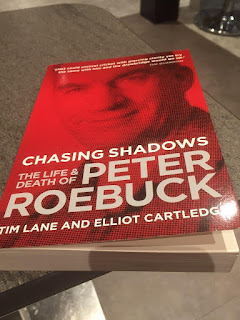 I'm a nervous flier. I bury my head into a paperback book called 'Chasing Shadows - The Life and Death of Peter Roebuck' - it's a disturbing read and not for the feint-hearted. We touchdown at 12:30pm at Tenerife South, collect our luggage off the airport carousel (no Ryanair hiccups this year) before checking in at the Hotel Malibu Park, in the resort of Costa Adeje.

The meet and greet is with 'Pep Guardiola.' We don't even get our feet through the front door of the hotel. The news is grim: "Senor, the apartment is being refurbished, you have to relocate to a different hotel." I'd have normally kicked-off, but saw this coming a mile off, from recent reviews on Trip Advisor. 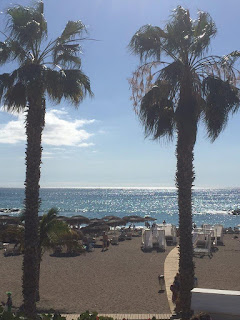 We're soon unpacked down the road at the Altamira Hotel, adjacent to the beach and a choppy Atlantic Ocean. We walk the five miles into Los Cristianos, calling by for scoops in the varying bars and cafes that litter the pavements, looking out towards the spectacular views of the coastline. We return to the hotel in the late evening, worse for wear. before retiring to bed after an exhausting day. But looking forward to ticking off our second Canary League ground at midday on Sunday.

I pull back the curtains and slide open the patio door. I'm greeted with clear blue sun-soaked skies. A wander is taken down to Harriet's Tea Room at Playa Fanabe, where we tuck into a hearty full English breakfast. The added bonus today, is that it's my 53rd birthday. We're made very welcome by front-of-house, Will, who grew up in Malvern. 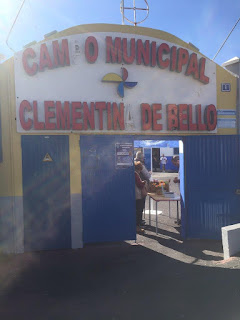 The taxi ride inland is only 10km to the village of Buzanada. We're dropped off right outside Campo Municipal de Futbal Clementino de Bello. There is already a hive of activity and buzz around the place as we part with 8 Euros each on the gate - there's little point in buying a programme. A guy on the gate, who is also selling water melons, apples, pears and oranges, very kindly arranges for a taxi to pick us up after the game.

The ground is a belter. There are extraordinary views out to the nearby hills and mountains. Half a dozen supporters are already perched high above the furthest goal with a bird's eye view of proceedings below. 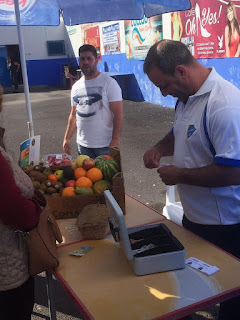 There's an open-air bar and changing facilities behind the nearest goal. We opt to stand on the far side at the top of some concrete steps where you can lean on a wall and shade from the scorching sun. Supporters get stuck into a few local beers as Sticky untwists the top off a bottle of water before taking a large swig in an attempt to re-hydrate his body.

The game is played on an artificial surface, which is desperately in need of relaying. It's saturated in water from sprinklers. It's more 0.01G than 4G. The players might as well wear trainers. 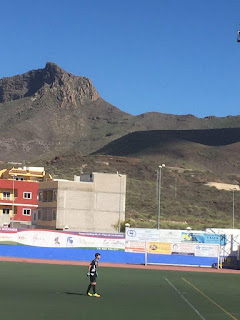 U.D. Lanzarote are today's visitors. I've no idea if they've flown in or hopped on a Fred Olsen ferry. They look well fed and watered, with at least seven of them well over 6' 4". They will be wary of   C.D Buzanada who ended their 43 match unbeaten home record with a 5-1 gubbing earlier in the season.

In the opening exchanges the visitors look to bully Buzanada, particularly from corners, set-pieces and long throws. Slowly Buzanada inch their way into the game. The 11 jacket is like a whippet. He shows the full back on countless occasions a clean pair of heels and has a good delivery too. 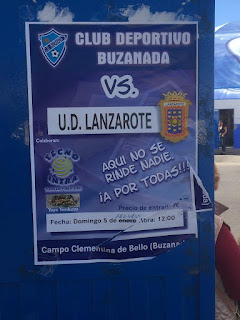 It's 0-0 at the break and Ms Moon is already fretting that it might end up goalless. I take a few snaps of the folk sat up on the hill above the far goal. There's little point in striking up a conversation with any of the supporters, as it's clear that not too many can speak English. I can do a 'Manuel' from Fawlty Towers, or an impressive Inspector Clouseau - neither are much use.

U.D. Lanzarote play like they've had a night on the tiles in nearby Playa de Las Americas in the second half. C.D. Buzanada, urged on by an excitable coach, run them ragged and are 2-0 up on the hour following some fast-flowing football, with the visitors chasing shadows in the searing heat. The game is put to bed with 8 minutes remaining with a far post finish from a substitute. 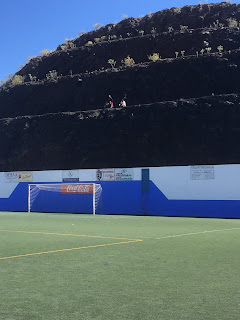 We spend the rest of the holiday relaxing by the pool or walking up and down the coastline. I get through a trilogy of football books written by the excellent Calvin Wade, who for the past three seasons, with a number of pals, has followed every round of the FA Cup, FA Trophy and FA Vase. The tales are heart-warming, with humour and right up my street.

The plane lands early Saturday evening at East Midlands Airport. We're both tinged with sadness and already missing Tenerife. I drop Ms Moon off before shooting down to Morrisons at Netherfield to buy some provisions. I call in at Auntie Val's to pick up Murphy who has been unusually stressed whilst we've been away.

Back at home I top up his food container and promise him I'll nip to Aldi in the morning to see if any broccoli has arrived from southern Spain. I turn in for bed after a couple of games on Match of the Day. I whisper goodnight to Murphy who already has his head tucked into his wing and is fast asleep. I carefully place the towel over his cage and quietly close the lounge door.

Ms Moon comes into the bedroom in the morning looking shaken and visibly upset. She doesn't need to say anything, as a picture paints a thousand words. My little lad, Murphy, has passed away during the night. I just hope he wasn't in any pain. I loved him to pieces and will miss him so very, very much.

I'm really sorry to hear about Murphy - I've read your blog for a few years (you write well) and enjoyed how he made a quirky addition to your story-telling, just as Finlay did too. He looks to have had a good life with a great owner who loved him a lot. Somewhere up there in wherever he might just be doing a little jig after your team's win today.