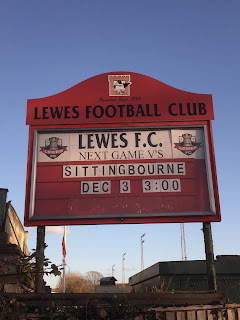 It's 4pm on Saturday, Ms Moon and I are exiting the Bilsthorpe Sports Ground in north Notts following a five-goal thriller. We call on an old work colleague of Ms Moon's who lives in the village. She makes us a much-needed brew as we toast our frozen feet by the fire in a cosy lounge. There's a huge stench of cat excrement in the car, that Ms Moon has managed to tread into the driver's side car mat. I'm wretching, folks, all the way home, with the window fully wound down in freezing temperatures.

I spend Saturday evening with a few pals out in the Vale of Belvoir, at the Nags Head in Harby - the TMS cricket commentator Jonathan Agnew lives just down the road. 'The Mayor of London' is holding court after a recent business trip to India. I have a sleepless night on his sofa, drifting off fitfully napping, finally awakening early doors with a thick head. I'm back at HQ for 9:30am. The bloody heating is on the blink. If that isn't enough I have to endure three of hours of the good lady 'singing' to the Sound of Music, which she has somehow chanced upon with the remote control. Murphy the Budgie asks for the towel to be placed over the cage and puts in a request to borrow my headphones. 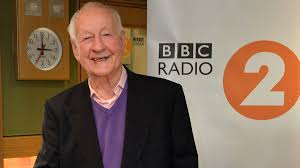 A sharp frost on Monday evening sees the Radcliffe Olympic v Borrowash Victoria League Cup tie get wiped out on Tuesday - a shame that, as I was hooking up with Jitz and Dringy. I meet an old Impero Software colleague in the Herbert Kilpin on Thursday evening - well it's been a couple of weeks since I ventured in. 'Staring at the Rude Boys' by The Ruts is booming out on the iPod shuffle - their lead singer Malcolm Owen was found dead in his parents' bathroom following a heroin overdose on the 14th July 1980.

I get the brush-off from Ms Moon on Friday evening. Remember the old line a girl would sometimes throw at you, back in the day, when you asked her out on a date ? - "sorry I'm washing my hair." Well I fell victim to this cliche on Friday teatime, when an invitation for a drink in town is declined. Oh well, at least I get the chance to listen to the brilliant 6Music DJ and Colchester United fan Steve Lamacq spinning Half Man Half Biscuit's 'I Was a Teenage Armchair Honved Fan.' 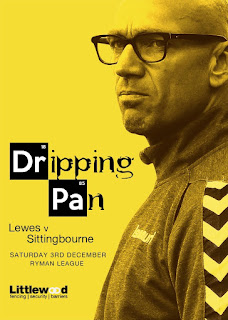 I'm up and in the shower at just gone seven bells on Saturday morning. We both don't want to break the news to Murphy Palmer the budgie that his favourite DJ, Brian Matthew, has been signed-off on the sick for a month. We're out the door before the show starts on Radio 2 - Murphy will be proper kicking off as he doesn't like his stand-in Sir Tim Rice - or Joseph and his Amazing Technicolor Dreamcoat. We leave him pecking out a few words on a 'get well' card for Brian, that he says he'll drop off at 'Wogan House', before flying back up to Carrow Road to watch his beloved Norwich City.

We're off to the Dripping Pan today - a groundhopper's dream. Ms Moon's brother lives in nearby Burgess Hill. His partner, Suzie, is recovering and making progress from a major operation at Harefield Hospital. It'll be nice to see him and offer our support. 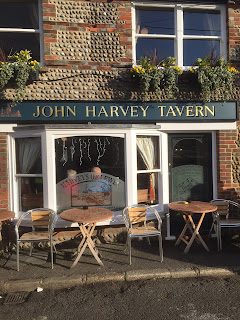 The main roads are as clear as a bell, even Tim Rice is on form as Sticky Palms bellows out hits from The Hollies (The Air That I Breathe), Herman's Hermits (No Milk Today) and The Walker Brothers (Make it Easy on Yourself). There's a quick pit-stop at Toddington Services before we finally tip-up at Burgess Hill, despite Ms Moon punching in the wrong postcode.

We're soon parked up in the historic East Sussex town of Lewes. We wander down the High Street before entering the John Harvey public house on Bear Yard, a bustling tap, named after the brewery's founder. It has a flagstone floor, a beamed bar and a flame-flickering woodburner. I enjoy a pint of Harvey's Indian pale and a brie and bacon sandwich. The waitress mucks up the order, but is very apologetic. 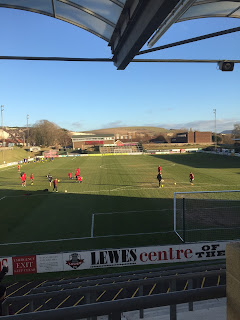 I settle the bill and leave brother and sister chatting to one another. I head back up the High Street following signs to the train station, whilst passing cafes, art galleries and chic and trendy bistros.
I can see the Dripping Pan in the distance and feel the excitement rise within me.

I cough up £10 on the gate and £2 for a programme. Nothing can prepare me for the sweeping views of the South Downs and Cliffe Hill. I wander past the Club Shop, Rookery Bar and 'The Hatch' refreshment bar. There's a stand that runs along the touchline behind the dugouts with red tip-up seats. Behind the far goal is an open terrace with sixteen concrete steps. On the opposite side of the ground, people view the game at the top of a steep grass bank with a stone wall to their backs, that is taller than me. 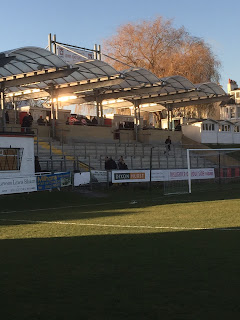 I'm gobsmacked and awestruck with the beauty of the ground. I've visited over 400 now, but this would have to be in my Top 5. It is said that the ground is called the Dripping Pan (est 1885) as monks from the local priory used to dry the water from the nearby river to make salt. The Club has had a chequered history, but there's a real community feel about the place, with everyone mucking in for one another.

They've been managed twice by Steve King - a legend on the Non-League scene. I came across King myself when I worked at Notts County. Folk thought 'we' had some lolly when Sven Goran Eriksson was Director of Footballer. King, with his cashmere coat and pork pie hat, had the look of second-hand car salesman. He was hawking a boy around the circuit called Joe Ralls, who played for Farnborough Town youth team. My boss and I went to watch him and invited him in for a trial for the Pies. But he ended up signing for the Bluebirds of Cardiff where he has gone on to make over 100 appearances and is still only 23 years old. 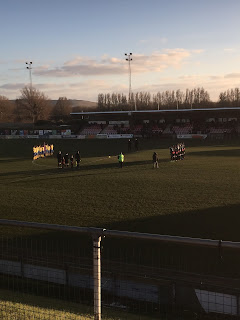 Brighton Hove Albion's Solly March began his career at Lewes, with King once again instrumental in the transfer negotiations. We saw March give Nottingham Forest the runaround at the AMEX in August 2015 - he's already made 49 appearances for the Seagulls and is currently recovering from a serious injury.

Lewes FC made headline news last season when it was announced that the new wave band Squeeze would be sponsoring their shirts. The band's singer, Chris Difford, lives close by. Talking of music, the DJ is banging out a few pre-match tunes from Kasabian and Muse. 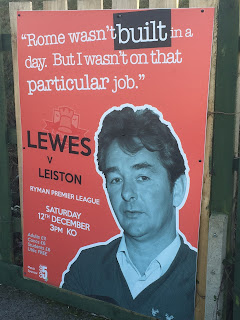 I stand at the top of the grass bank with my back to the wall, shielded from the cool air. I engage in conversation with a Barnet fan who looks like Uncle Albert from Only Fools and Horses - he has more anecdotes than Albert. He used to play for the Bees back in the day and was also on the Lord's groundstaff. He's a keen Crown Green bowls player, who has been watching the Rooks since 1985 and is a fountain of all knowledge.

One or two Lewes players have picked up injuries from their trip to Guernsey - a few young uns have been drafted in. Sittingbourne take the lead in the third minute with a well-worked goal from a long throw-in, when a ball is played back to Joe Loft who strikes a daisy-cutter into the bottom corner of the net.

Lewes are battering Sittingbourne down the right-hand side but fail to find that cutting edge. Ms Moon and her bro tip-up at half-time. Andrew is like a Trumpy Junior (blog legend) with his beer-swilling skills and a king-sized Lambert and Butler cigarette hanging from the corner of his mouth. 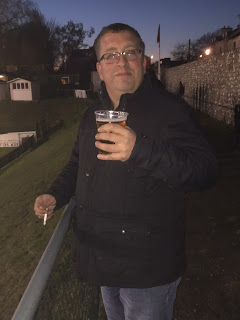 Against the run of play Lewes concede a sucker-punch goal to the street-wise visitors. Most teams would be dead and buried, but back they come for more. The young ref has had a 'Weston-Super- 'Night' Mare, constantly bringing play back and not allowing the advantage. He caves in to an appeal for a penalty, which allows Lewes back into the game.

'Uncle Albert' has now joined the raucous crowd cheering the young braves on from behind the goal in the 'Rookery.' The equaliser is a beauty and well deserved for their never-say-die attitude. A free-kick is clipped into the area, the visitors perform the 'Mannequin Challenge' allowing Smith to ghost in on the blindside and head home. The crowd go ballistic. I raise my arms above my head and clap furiously. The moment is beautiful and a befitting end to a brilliant day.

Glad you enjoyed our ground