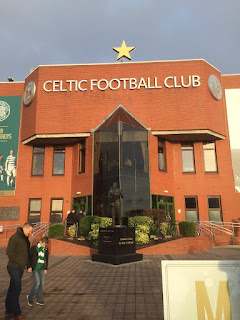 It's 5am on Friday morning and a bleary-eyed Sticky Palms is trudging down the stairs. I wolf down a bowl of porridge and slurp on a cup of green tea. My work colleague Lee and I are on the early flight to Glasgow for the Ideagen PLC Christmas party. I kiss Sleeping Beauty (Ms Moon) goodbye and head out of the door.

We cruise down the M42, arriving at Birmingham Airport with time to spare. The flight's delayed by an hour - it could have been worse as the Flymaybe 8:30am to Edinburgh is delayed by four hours. Customers are kicking off big style, venting their rage down the phone lines to Flybe customer service reps. 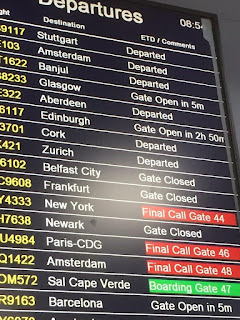 We jump in a taxi and head out of Glasgow, with its slate grey skies, up to our office in East Kilbride. The taxi driver is a Partick Thistle fan. He rambles on about the time he saw Scotland beat England 1-0 in 1964 - he missed the goal as he was dispatched to the bar to shout up the pints and pies.  We enjoy some banter in the commercial department before the trip back to the Hilton Glasgow. There's time for a quick cat nap and bath, before stepping out onto William Street and up to the Bon Accord on North Street. The cheerful tavern stocks an amazing 380 malt whiskies. I sink a couple of real ales from the Oakham Brewery.

The party is held in the hotel ballroom on the third floor. The highlight of the night is when a couple dance to 'Let it Go' from the film Frozen - the lady's partner literally does let her go. The poor woman twists on her stiletto's before unceremoniously crashing and slumping to the floor. The whole room are in stitches. Tears are rolling down my cheeks. The woman's friend (who looks like Bella Emberg off the Russ Abbot Show) on the next table, is not amused at my laughter. She asks me if I'd like to step outside - and I don't mean a hand-in-hand romantic walk down the River Clyde. Even Lee, who is from Mansfield and goes down the gym every day, is scared of her. I make my excuses and head upstairs for the night. Tomorrow we'll be doing some hard yards. 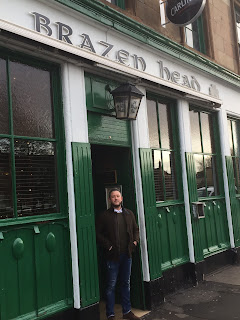 We finally come across the Brazen Head and boy oh boy it doesn't fail to disappoint. I'm taken aback at the memorabilia on show in the bar. Walls and ceilings are bedecked in flags, photos, scarves and shirts. The Guinness is poured beautifully and left to settle by a friendly bartender. Crystal Palace are playing Chelsea on the TV. We're as snug as a bug sat on bar stools, as the pub begins to fill up. A band member strums his Irish Ukulele as the group sing a few Celtic songs. The punters clap and cheer. The atmosphere is electric. We sink a few more pints before heading up to the Gorbals. 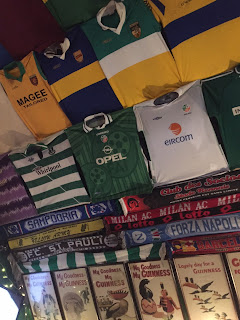 When I think of Scotland it reminds me of my Glaswegian pal Jim Henry and the brilliant comedy series Still Games. Jim had a brother called Rab (not related to C Nesbitt) who used to get me copies of the popular Celtic fanzine Not the View - so I've always had a soft spot for the Bhoys.

Celtic were founded in 1887 with the purpose being to alleviate poverty in the immigrant Irish population in the East End of Glasgow. The club has been crowned Scottish League champions on 47 occasions. 1967 was the Bhoys' Annus Mirabilis - they won every competition they entered including the European Cup, where famously the team were all born within a 30-mile radius of Glasgow. Celtic have only ever had 18 managers. Billy McNeill made 822 appearances for the Bhoys. 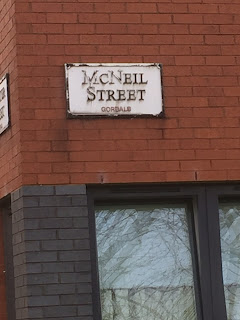 Their most expensive export was Victor Wanyama who they sold onto Southampton in 2013 at a £11 million profit. Celtic also hold the record for the highest attendance for a European club competition when 136,505 fans rocked up at Hampden Park for the 1970 European Cup semi-final versus Dirty Leeds United. In November 2008 Gil Heron, Celtic's first black player, passed away at the age of 88. He was the father of the jazz musician Gil Scott-Heron, who received critical acclaim for the well-known song 'The Revolution Will Not Be Televised.' *Thanks Kev McSharry for this nugget.*

Celtic Park comes into view. I take a wander around 'Paradise' and snap a few photos of the statues of Bhoys legends Jock Stein, Jimmy 'Jinky' Johnstone and Billy McNeill. Lee is gagging for a beer and I'm dying for a 'Jimmy Riddle.' We enter the turnstile in the Lisbon Lions Stand.  As I exit the toilet I find a crestfallen Lee with a face like a smacked arse - he's received some devastating news, alcohol isn't sold in Scottish football stadia - the bastards  .... how could they do this to us ? I thought they loved a bevvy up here ? 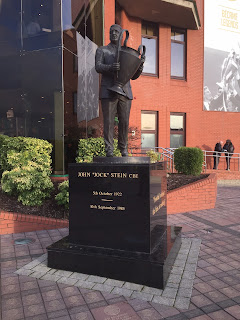 Perhaps we could nip up the Gorbals to see if some of the lads have any of that Buckfast Tonic wine that was blamed this week by a Dundee sheriff for drink-fuelled thuggery in Scotland. It nets the Buckfast Abbey Trust in Devon a cool £8.8 million per annum.

We take our seats up in the Gods of the Lisbon Lions Stand, enjoying the panoramic view of Parkhead and the landmarks of the city of Glasgow. Lee scoffs a meat pie and a cup of tea, still shaking his head at the alcohol ban. 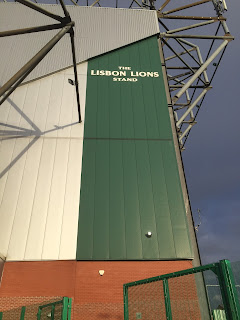 Celtic are running away with the SPL. 20-year old French striker Moussa Dembele was awarded immediate cult status after a late winner versus Rangers a few weeks ago, following on from a hat-trick against them earlier in the season. He finds himself sitting on the bench today.

The atmosphere is electric despite Shakin' Stevens blasting out of the PA system. I'd expected a bit of Simple Minds, Orange Juice or even 'Donald Where's Your Trousers' by Andy Stewart - all are sadly absent. Dundee's greatest ever singer is no longer with us. In 1981 I paid £2.50 on the door at the Nottingham Boat Club at the back of Forest's City Ground to watch Dundee's finest - The Associates. The distinctive high-pitched tenor voice of Billy Mackenzie is something I will never, ever forget. On 22nd January 1997 Billy was found dead in his father's shed. He was only 39 years old. 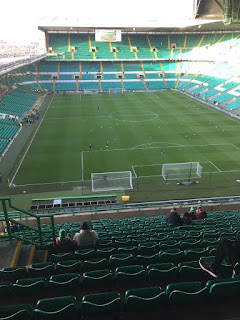 Dundee sit deep, keeping ten men behind the ball. Celtic swarm all over them like a rash. Time and time again their full backs are left for dead by the overlapping wing backs, with the final killer ball being hoofed away with a desperate clearance. Brendan's Bhoys are overdoing the passing, nobody wants to take the responsibility of unleashing a shot, something that Dundee aren't afraid of on their rare forays into the Celtic half. A couple of efforts whistle past the wrong side of the post. Leigh Griffiths sees an effort kiss the woodwork after a wonderful give and go, while Tom Rogic squanders a chance when it looked easy to score.

Dundee are hanging on the ropes and desperate for the half-time whistle, so they can re-group. With seconds remaining Celtic are awarded a free-kick 22 yards out. Griffiths clips the ball beautifully with his left foot, sending it over the wall and into the net. Dundee manager Paul Hartley, an ex Bhoy, will be as sick as a parrot. 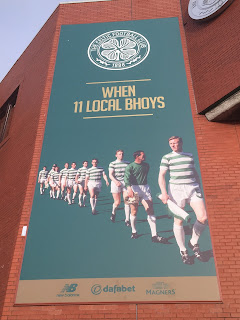 Celtic up the tempo in the second half and go for the jugular with ex-Notts County loanee Callum McGregor operating on the Celtic right wing. The game is all but over when the Israeli, Nir Bitton, guides the ball into the bottom corner of the net.

The Dens Park team don't know when they're beaten. The warning signs are there when they hit the post, moments later they pull a goal back from another former Notts County player Marcus Haber.
With a minute remaining substitute Faissal El-Bakhtaoui spurns a golden chance when skying the ball over the bar having been put clean through.

Man of the Match: Lee 'Lennie' Godber - for putting up with me all weekend.
Posted by Sticky at 7:06 PM