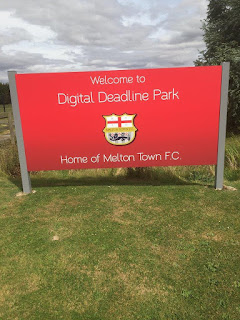 Murphy Palmer, the budgie, and I, are still raging with X-Factor flop Jake Quickenden (booted off on week 3 by the Great British public). Murphy pecked his way through Quickenden's Twitter timeline. He failed to show at last week's FA Cup tie up in 'Sunny Scunny' because he claimed he was singing at a poolside party in Ibiza. I bet it was at some ropey Thomson hotel in front of a load of old codgers. He's quick to answer a steady stream of floozies who flood his timeline, calling him Babe, but not a polite question from Sticky and Murph - the big-time-Charlie. His new single 'Feel My Love' was released in July. You get it free if you rummage around in your Corn Flakes packaging.

It's Monday tea-time and I'm strolling over Trent Bridge towards the cricket ground. There are no queues at the ticket office as I hand over £20 to the cashier. I have a swift pint in the back garden of the Stratford Haven, before finding a seat in the Larwood and Voce Stand, where I'm exposed to the bright evening sunshine. Notts are playing Essex in a T20 quarter final. My good friends, the Baker brothers, (Essex fans) are in the Fox Road Stand, adjacent to me. I'll see how many Notts rattle up before hunting them down.

Notts look 20 runs short as they limp their way to 162-7. I join the Bakers, who seem rather bullish, and a gathering of folk from Keyworth Cricket Club, including Barnsley FC fan Roger Wilson. New Zealand fat lad, Jesse Ryder, is at the crease and looking in imperious form, as he finds the gaps during the power-play. The Baker boys think the game is in the bag. Ryder is the victim of a freak run out. Essex crumble under pressure. Samit Patel is on flames, as Notts run out comfortable winners. 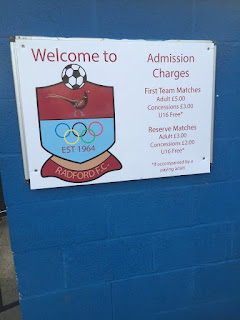 I'm down Selhurst Street in Radford on Tuesday evening, at the One Call Stadium. Local businessman, Adrian Rawdon, has very kindly donated some money into grassroots football. I'm stalking Radford manager, Big Glenn Russell, who is sporting his trademark baseball cap as the Pheasants romp to a 5-0 victory over local rivals Arnold Town.

We're back at HQ on Friday, in The Embankment, just over Trent Bridge. I gate a couple of craft ales from the Gamma Ray stable. It's 5.4% and amber nectar, folks. JJ, a Heinz variety dog, wolfs down a bag of pork scratchings that the barman has very kindly bought him. We switch on the Comedy Channel on our return home, and watch Nottingham Forest take a battering down in Brighton. We went to the corresponding fixture last season, they were bloody awful that night, too.

It's Saturday morning and Murphy is chillaxing on his perch to Merseybeat band the Swinging Blue Jeans and their 1964 hit 'You're No Good.' I take a trip to the tip before rocking up at the SCS furniture store on Lady Bay Retail Park. I sign a four year contract for a swish, leather sofa - it's a year longer than Armand Traore the Forest left back got, when he recently signed a three year deal from Queens Park Rangers. I really need to get a grip on my life as I emerge from B&M with a set of new baking trays. There's time for a headloss in Morrison's where the food aisles are clogged up with OAPs, who've had all week to flipping shop. 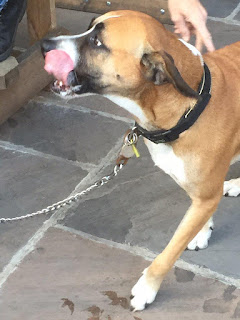 We head out to towards Leicestershire down the A46, as the A606 to Melton Mowbray is shut off. By chance we enter the village of Burrough Hill. A famous thoroughbred horse called Burrough Hill Lad came from here. He was trained by Jenny Pitman and its wins included: the Cheltenham Gold Cup and Welsh Grand National.

We pitch up at the Stilton Cheese, in Somerby. Leicester City flags are fluttering on the roof. The chef has radio commentary on from the KCOM Stadium, in Hull. I have a pint of Maori from the South Island Brewery in New Zealand. We both opt for homemade sausages. Oh dear, Trumpy Bolton isn't going to be too chuffed, the Foxes are losing 2-1 to the Tigers. 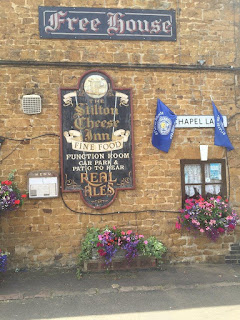 Melton Mowbray is a town in Leicestershire with a population of just under 30,000. It is well known for its pork pie and Stilton cheese. Pedigree Petfoods were a major employer in the town, with 2000 people working there at one time. Well known people from Melton include: footballers Paul Anderson and Oliver Burke, ex England fast bowler Tim Munton, Monty Python actor Graham Chapman, actor Mark Wingett (DC Jim Carver from The Bill), Leicester City striker Jamie Vardy lives in the area.

Melton is bustling with folk today, 'Pie Fest' is taking place at the Cattle Market. Digital Deadline Park is on the outskirts of town, on the Burton Road. It is also known as the Melton Sports Village. 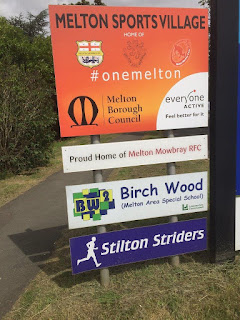 It's £5 on the gate and £1 for a four page programme. Hoppers come from as far afield as Surrey, Sussex and Felixtowe to tick the ground off, as it's Melton Town's first season here following promotion from the Leicestershire Senior League. I have a friendly chat with vice chairman Howard Eggleston. I remark that it is somewhat of a coup that they have managed to attract former Bristol City and Luton Town striker Tony Thorpe as their manager this season.

A silver-haired Thorpe takes his position in the technical area, his assistant, Ross Perkins, is on a five match touchline ban for a misdemeanour at his previous club Barrow Town. The visitors are soon in front, a deep cross from the left is nodded into the net by Ryan Kalla. It isn't pretty on the eye. The Melton defence seem content to hoof the ball down the middle, with strikers Palfreyman and Love living off scraps.

'Thorpey' isn't in the dressing room for long at half-time, he's steaming and looks to have blown a gasket. He apologises to Ms Moon and I, if we caught any bad language. Ten Red Arrows, in two banks of five, roar across the skyline, heading back to base in RAF Scampton in Lincolnshire. Melton don't look as if they have a goal in them. Substitute Jack Baker, back in the early hours of the morning after being on the lash abroad with his mates, lifts the spirits of the team with some skillful, jinking runs. 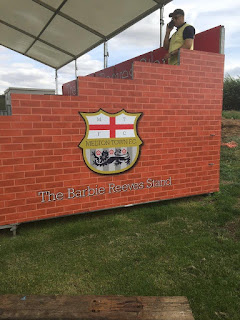 There is a sickening challenge by the portly Rushden left back. The whistle had long gone when he lunges in with all studs showing down the shins of his opponent. Remarkably referee Mr Walker chooses not to consult his assistant and only brandishes a yellow card. The chunky defender is sensibly substituted allowing him time to race across town for seconds at the 'Pie Fest.'  Rushden's second goal is a replica of the first, with the cross this time coming in from the right wing and once again nodded in at the back stick.

A stray clearance heads in my direction as referee Stewart Walker blows for time. I scurry after the ball, before bowling it back towards the ref. Envious Hoppers look on, as they always like a touch of the match ball.

Man of the Match: Ryan Kalla