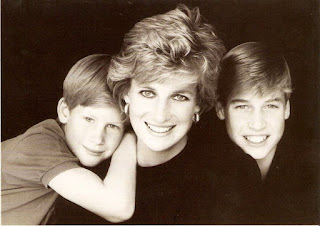 I'm surfing the 'net looking for a game to go to next Saturday. We haven't been to Northants in ages. I'm quite fond of the United Counties League. I'm hearing good reports about Northampton Sileby Rangers ground. Despite being fourth from bottom they are the entertainers in this league, having scored 64 goals and conceded 82.

I pick up the Good Pub Guide and start flicking through the pages. The Althorp Coaching Inn in the picture postcard village of Great Brington is in the main section and on further investigation looks a pearler. I'm astonished to read that the great-great-great grandfather of former USA President George Washington, Lawrence Washington, is buried in a vault in the church. It's going to be another Saturday lunchtime snooping around a churchyard.

The week flies by, as I take annual leave on Tuesday. I'm stood on the touchline at Nottingham Forest's Nigel Doughty Academy chattering away to Leicestershire groundhopper Rob Campion. I notice a chubby lad up top with a ridiculous barnet. It's Tricky Tree striker Britt Assombalonga. He'll need to wear a few bin liners in pre-season to shed the excess weight after a 12 month lay-off. He scores a peach of a goal with a rocket of a shot from just outside the penalty area. 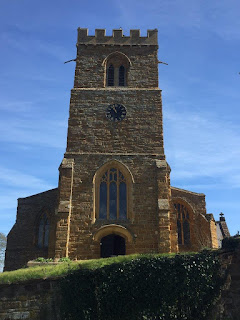 I meet my boys at tea-time in the 'World Renowned Trent Bridge Inn.' It's the most expensive Wetherspoons in Europe. Sticky Palms is looking forward to tucking into his £20 CAMRA discount vouchers. A pleasant evening is finished off  by sinking a pint of Castle Rock's Elsie Mo in Jessie Boot's old dispensary in the recently refurbished Embankment on the north side of the river.

There's just time to nip down Daleside Rd on Saturday morning to fetch Murphy Palmer the budgie a honey bar from Pets Are Us. I have a tearful moment in the shop as I walk past some bunnies that resemble recently deceased blog legend Finley Palmer. The honey bar is an extortionate £1.69. Old fat lad can take his time pecking on this one. 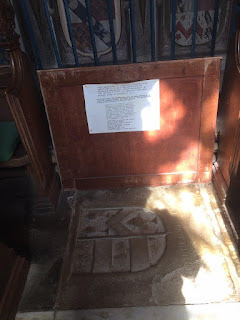 The trip to Northamptonshire is without incident until Ms Moon says that JLS were 'quite good.' We sail down the M1 in Ms Moon's brand new, just off the shelf, white Vauxhall Mokka. The rain has cleared, skies are blue and the sun is beaming as we tip up at the church in Great Brington.

As luck would have it the church front door is open, a Chubb alarm engineer is in deep conversation with a church warden. I seek permission to enter the church and take a photo of the vault in which Washington's great-great-great grandfather is buried. Permission is granted unlike last week when some grumpy WBA fan declined my request to take a snap of his scruffy mongrel for the Non League Dogs website. 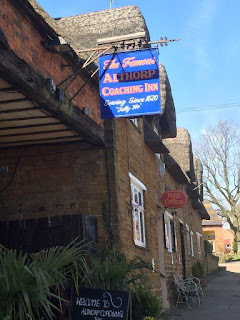 The pub is just around the corner. It was re-named the Althorp Coaching Inn following the death of Princess Diana in 1997 at the age of just 36. Her death had a profound effect on the local community, whose village lies just a short distance away from the Althorp Estate where Diana Spencer once lived and is now 'buried' at. Twenty generations of the Spencer family are buried in the Spencer Chapel.

We are made very welcome at this dog-friendly 16th Century coaching inn. I have a pint of Phipps NBC Indian pale ale from a local brewery as we enjoy a baguette and some home-cooked chips. We stretch our legs around this charming village. Ms Moon points out there are no Spencers named in the 30 soldiers who died in the First World War on the War Memorial. We stroll past the local post office which was once owned by the mother of radio disc jockey Jo Whiley, who grew up in the village. I nearly get wiped out as I cross the road by a cyclist who is wearing a Northampton Saints training top. 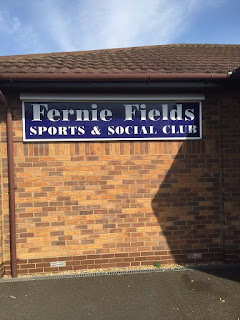 Fernie Fields is a 20 minute drive away. We seemed to have driven up the wrong entrance, so abandon our vehicle on some posh housing estate. We slip into the ground through the players' entrance without paying. I wander over to the turnstile on the far side and cough up £13 for two entries and an excellent programme.  I nip to the loo, which is adjacent to the changing rooms, which are pumping out some serious tunes.

The ground is charming. I admire the neatly trimmed privet hedge that runs behind the far goal and along the farthest touchline. The pitch is like a billiard table, with a well manicured playing surface.
We chance upon a silver-haired gentleman in salmon pink trousers. Pete, denies being a groundhopper, despite going to three games a week. The guy is well animated and reminds of a thespian actor. 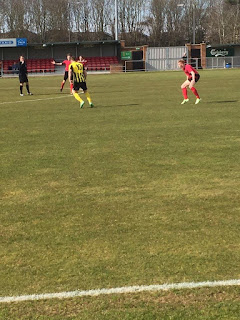 We position ourselves inbetween the two dugouts. The Holbeach 4 jacket, Ollie Gale, is the stepson of one of my best mates, Ackers, who occasionally joins us on the groundhop.

There's no real tempo to the first half. I'd have expected Holbeach to bust a gut as they chase down the leading pack with games in hand, they play with little urgency. Sileby's left back can launch a throw-in longer and flatter than Rory Delap. They fail to exploit this, when the best tactic would be to play down the channels and squeeze the full backs. 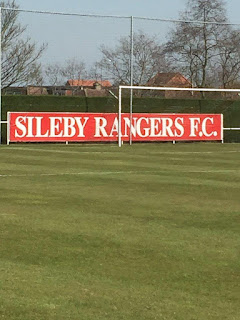 The visitors take the lead on 12 minutes with a superb finish from Sean Coughlan, who deftly lobs the ball over an onrushing 'keeper after an outrageous first touch. Ms Moon shouts up the hot drinks at the break as I get gassing to three elderly gentlemen. Princess Diana soon crops up in the conversation. It's fair to say her younger brother is not popular in these parts. Most folk are certain she is buried in the Spencer Vault in the church and not on the island on the Althorp Estate.

Holbeach are bloody awful in the second half, barely fashioning a chance. Sileby equalise with a superb header from a left footed inswinging corner. The referee waves away claims for a penalty as the Sileby forward falls to the ground after a heavy challenge. He leaves the field with what looks like a dislocated or broken finger. There's no qualified physio on either bench, so it looks like a trip to accident and emergency for the inconsolable striker.

Man of the Match: Dominic Okanu

Your mention parking on the 'posh estate'. I've visited this ground on the last 3 seasons with AFC Rushden & Diamonds and the crowd for last April's match on a Tuesday evening was 586. Usually the Sileby go to great trouble to ask fans not to park there, since there is an excellent car park behind main covered stand. Sileby have had problems developing their ground over the last 10-12 years with resident objections to their planning proposals. It took them some time to receive planning permission from NBC for their floodlights. I believe only 25 or so league and cup games are played at Fernie Fields and this may be as a result of planning consent conditions. Sileby have no U18 or reserve teams so another reason why the playing surface is so good.

Pleased you enjoyed your visit for what is an excellent ground for this level of football and it's a shame that the club don't get better crowds based in a large town with a population over 200,000 but most football fans in the town only have eyes for the Cobblers.
News is breaking today that Northampton Spencer who play only a couple of miles away in the same UCL Premier division may have to disband if a new chairman and committee aren't found in the close season.

Sad news about Northampton Spencer. Graham Carr sent me there once to scout a player. The sat nav took us into the housing estate, we couldn't find the main entrance. Was told Sileby recruit well from University and college. Seemed to have a lot of young players. Was very disappointed in Holbeach, they didn't play with much passion or belief. Cracking day out though.