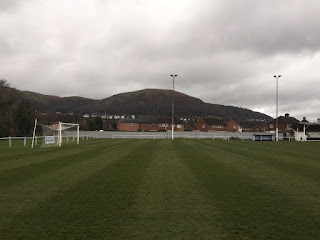 I live across the road from Nottingham Racecourse and more importantly Colwick Country Park. We take in a lung-bursting walk on Sunday lunchtime around the perimeter of the racetrack and through the park, which is bathed in glorious sunshine. Our thirst is quenched in the Old Volunteer on Burton Road - the 'Best Newcomer' in the Great British Pub Awards in Notts 2015. Flipside Brewery have turned this Carlton pub on its head. I quaff a pint of chocolate orange stout called 'Half Time.' Ms Moon describes it as 'disgusting' as she knocks back a Diet Coke.

Ironically, I'm back in Carlton on Wednesday evening, as Carlton Town and Spalding United play out a dour 0-0 draw on a bone dry bumpy surface at Stoke Lane. I had hoped to catch in action the visitor's 16 year old forward Jonny Lockie, who recently spent time on trial at Everton, Leicester City and AFC Bournemouth. It's a no-show from the youngster, as he can't bunk-off from college in time for the trip over to Nottingham.

I've broken up for Easter early. I'm always at my most dangerous when I'm bored. I leg it into Nottingham on a solo mini pub crawl. The highlight of the tour is the re-opening of the Lord Roberts in Hockley - another shrewd acquisition by the Flipside Brewery. 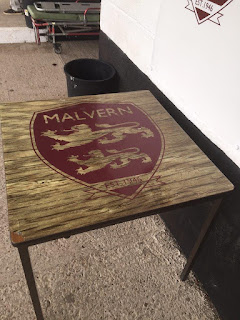 We're met with sun-kissed skies on Good Friday. It's spent walking 14 km down the canal to The Victoria Inn in Beeston. We're too fagged out to peg it back, so hop on a tram into town. We drop into the Bell on Angel Row, just off Nottingham's Market Square. It must be over 20 years since I sunk a pint in this fine establishment. I shan't leave it so long next time.

We're up with the larks, with cases packed early, on Saturday morning, as we escape for the weekend to the sleepy market town of Ludlow in Shropshire. First port of call, though, is the spa town of Malvern in Worcestershire, where we'll be watching football later in the day.

Graham Norton plays possibly the worst record I have ever heard in my life - it's Yoko Ono singing 'Walking on Thin Ice.' I'm still recovering from the moment as we park up on the outskirts of Malvern town centre. 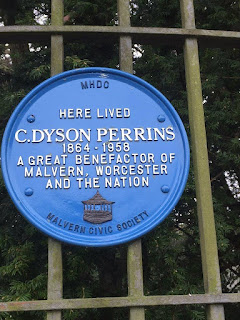 I have a moral dilemna. I've just spotted an old coaching inn that has been tastefully restored by the pub chain Wetherspoons, whose watering holes we're not a big fan of. We take the plunge to tick-off this Good Pub Guide entry. A cloudy pint of real ale is changed without fuss, their customer service response on Facebook is first-class.

A pleasant lunchtime is spent with Ms Moon's brother in-law at the glorious surroundings of the Nags Head. The pub frontage doesn't do it justice. There is a fine range of ales, a chatty atmosphere and two roaring open fires. Malvern Town's Hdanywhere Community Stadium is only a short drive away.

Malvern has a population of just over 30,000. The British composer Sir Edward Elgar spent much of his life in the area and is buried in Little Malvern cemetery. Other famous folk from this neck of the woods include: Charles Perrins (Lea and Perrins sauce), TV presenter Anne Diamond and the first female Home Secretary, Jacqui Smith. 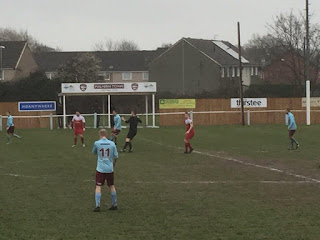 We are greeted by two cheerful guys on the turnstile. It's £4 each and £1 for an excellent and well written programme. A jolly lady in the tea bar serves up a couple of hot drinks. Black clouds are rolling in from the Malvern Hills. The only real cover is the main stand on the near side of the ground. A football card is doing the rounds in the stands. We pay £1 each and scribble our names underneath 'Notts Forest' and Notts County - ironically D***y County is announced as the winner.

It's a second look at the West Midlands Regional League Premier Division and at AFC Bridgnorth too. I wasn't impressed with what was served up in their top of the table 0-0 bore draw with Shawbury United a few weeks ago -  nor with some of the comments coming out of the Shawbury dugout.

Malvern win a vital toss and choose to attack with the wind behind their backs. The visitors spurn a early chance which proves to be vital as Malvern put Bridgnorth's defence under constant pressure, using the swirling wind to their advantage. It's 3-0 before you know it. 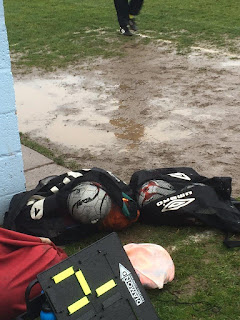 At the break I take a peek at the newly refurbished clubhouse. I spot an old guy sporting a West Bromwich Albion beanie hat.  He has a dog for company that is the size of a drowned rat. I approach the gentleman to ask if it would be okay to take a photo of his mutt for the Non League Dogs twitter account and website. "No you can't, I don't want you to", the bloke replies. I'm taken aback. I about turn and come across Ms Moon outside as she stubs out a tab end. I'm not sure who looked more miserable, the dog owner or his forlorn looking mongrel. I've never liked WBA since they knocked 'The Lincoln' out of the FA Cup in 1976. I was spat on that day and had my scarf grabbed by a Baggie hooligan. Murphy the budgie and I will be following 'the Wolves' from now on. They remind me of Hugh Johns on Star Soccer with Derek Dougan and John Richards leading the line, back in the day.

A freak hailstorm batters the playing surface, making the centre circle a no-go zone. Bridgnorth pull a goal back, but the damage has already been done. 'Milky' plays a give and go with Luke Corbett before rifling home the winner. Bridgnorth's best player Kevin Buxton scores the goal of the game with a 30 yard delicate chip which catches the home 'keeper off his line.

Attendance: Not a Scooby

Man of the Match: Luke Corbett
Posted by Sticky at 8:52 PM