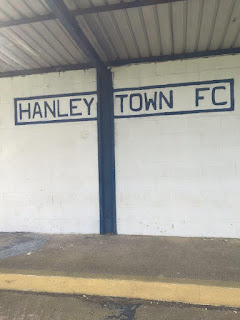 It's midday on Sunday and we're hanging about waiting for folk in the car park of the Chequers in Woolsthorpe on the Notts/Lincs border. White Van Man has assembled the troops for a five mile ramble in the Vale of Belvoir down the Grantham Canal. We're back at the former coaching inn for lunch a few hours later. I order up a pint of real ale from Gloucester in the heavy-beamed bar.

Lunch is served in a plush dining room on a table set for twelve. White Van Man loves his Sunday roast and is not one for hanging about when it's served up on his plate. There's a load of commotion when his beef rocks up a lighter shade of pink. It's soon sent back to the kitchen in a hurry before being swiftly charcoaled and returned to the table. WVM eats under protest before performing a sharp exit with steam coming out of his ears. Lessons learnt: never mess with the Big Man's food.

The Taxman and I revisit the wonderful Selhurst Street ground of Radford FC, set in one of Nottingham's multi-cultural areas. The place smells of football and reminds me of the setting of one of Alan Sillitoe's 1960s black and white films. Sticky Palms is a big fan of Radford gaffer Glenn Russell. He certainly knows how to assemble a squad and keep them all happy. It's our second look at the visitors South Normanton. The first half is a tremendous advert for the East Midlands Counties League. Both teams spurn chances, after Radford take an early lead through Carey Knight. The Pheasants run out 1-0 winners despite finishing the last 25 minutes of the game with just 10 men. The race for the title is hotting up with a number teams still in the hunt for silverware. 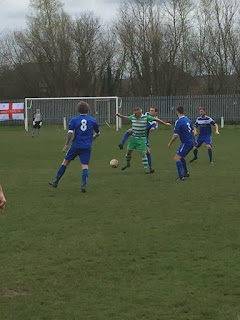 I walk into town to meet Ms Moon from work on Friday tea-time. I fancy an ale or two at the revamped Cock and Hoop on High Pavement. Ms Moon has a penchant for bubbles. I enquire how much a bottle of Prosecco is, £25 is the reply. I jokingly tell the barmaid that I don't want champagne before about-turning and heading off up to the Bell where the fizz is £15 a bottle. I can't arf pick em, readers.

I'm up with the larks and in Marks and Spencer's food hall in the leafy Nottingham suburb of West Bridgford by 8:30am on Saturday. I get my ears lowered at the Barbers Lounge on Gordon Road. I grab Ms Moon a skinny latte from Costa in Colwick. Murphy Palmer the budgie is whistling his wee head off to Stevie Wonder's Place in the Sun on the Brian Matthew show as I walk through the front door. 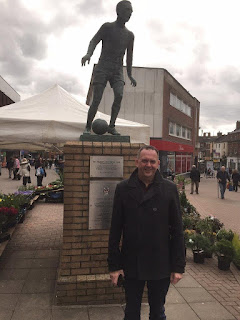 We're speeding down the A453 and onto the A50 as the skies begin to brighten. Hanley's excellent twitter account confirms today's game is on. Graham Norton is already getting on my wick. The buffoon plays Reach by S Club 7 twice in a row. Why couldn't he play S Club Party?  - me and Murphy love that one.

First port of call is the Queens at Freehay near Cheadle. I have a pint of Lancaster Bomber as I chat to a charming landlord. A pub bore tells us a few long-winded stories of haunted hotels he has stayed in. He mentions that he's had a £50 each way wager on Holywell in the Grand National. I joke with him that I've had 50p each way on the same horse. We tuck into a homemade beef and merlot pie. Even Phil Collins 'In the Air Tonight' doesn't dampen my lunchtime. I admire the photos on the wall of Ian Botham and Lords cricket ground. The landlord is a gentleman and the service is first class. 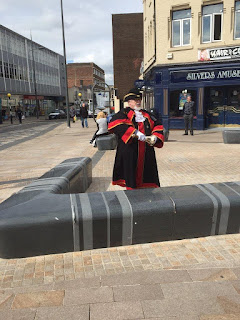 Mark Goodier is struggling to fill Bosman transfer Tony Blackburn's boots on Radio 2s Pick of the Pops show. He plays the worst Elvis Presley song I've ever heard in my life. It's from 1972 and called 'Don't Ask Me Why. I'll tell you what Elvis, don't ask me why you released it.

The Sir Stanley Matthews statue is situated in the centre of Hanley. His ashes are scattered under the centre circle at Stoke City's Britannia Stadium. I pose for a couple of snaps, before we dive into the Reginald Mitchell Wetherspoons, named after a local man who designed the Spitfire fighter plane. Hanley is one of six major towns that joined together to form the city of Stoke on-Trent in 1910. It is well known for pottery-making and coal mining. 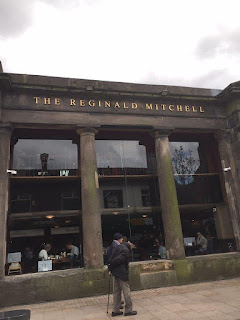 Ms Moon is no fan of the Wetherspoons watering holes, Sticky, on the other hand, is all over them like a rash as he has £20 of CAMRA discount vouchers to plough his way through. I sink a pint of Squires Gold a springtime ale, Ms Moon sulks over a diet Coke. As we stroll back to the car we catch the town crier in action and a nervous bride posing for photos before taking the plunge in Hanley Town Hall.

It's a two mile drive to Abbey Lane the home of North West Counties League Division One leaders Hanley Town. It's £4 each on the gate and £1 for a programme, a friendly official points us in the direction of the clubhouse. 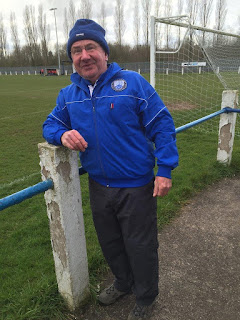 We wander in an anti-clockwise direction around the ground. We bump into local football enthusiast Kevin. He's dressed in Hanley Town clobber but also confesses to being a bit of a groundhopper. He's up in Scotland in a few weeks time to tick a few grounds off in the Edinburgh area. Olly the long-haired labrador is begging for a treat behind the nearest goal. One or two fans aren't talking to him as he failed to show up for Hanley's midweek fixture on Tuesday, preferring instead to watch Paul O'Grady's 'For The Love of Dogs' TV show.

We stand opposite the Colin Stair Stand, named after a former manager who died tragically and suddenly only a couple of seasons ago. We are served up utter tripe in the first 30 minutes of the game. Holker OB put ten players behind the ball and look content with nicking a point. Their sole striker is silver-haired and looks well into his forties. He's hardly going to work the channels or ghost past a defender with a change of pace. A couple of Hanley supporters will definitely win 'Spliff of the Season', it doesn't half pen 'n ink as the smoke drifts in the wind. 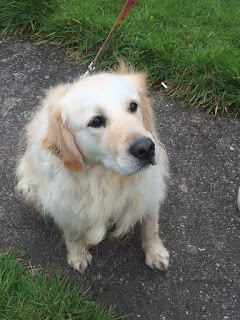 A goal of extreme quality which doesn't befit the game is scored on 37 minutes by Crewe Alexandra on loan striker Jonathan Higham who drills home the ball into the bottom corner of the net following good work by Lassana Sidibe, the younger brother of former Stoke City striker Mamady Sidibe. It certainly gets Olly wagging his tail.

The weather has turned with driving rain replacing sun-kissed skies. We dive for cover in the clubhouse. Tea and coffee are £1 per cup. I bump into a Halifax Town supporter, who's also a groundhopper from York. He has spent the morning in Buxton and driving around the High Peak area of Derbyshire. He's not particularly impressed with the stadia or standard of football. He has more camera equipment than Lord Lichfield.

We shelter in the Colin Stair Stand as Hanley turn it on in the second half and run riot. They race into 4-0 goal lead. Poor old Kevin is running around the place like a blue-arsed fly retrieving scuffed efforts from hedge bottoms and adjoining fields. They even manage to fluff a penalty before running out 5-1 winners.

Man of the Match: Olly the Dog and Kevin