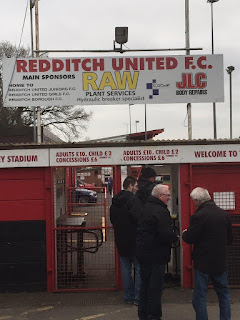 On Sunday we take a ride out to Shipley Country Park in Heanor. It's the artist formerly known as the American Adventure Theme Park, which closed in 2007. Rumours are circulating that the place might re-open. I can't see it myself, it certainly won't be Merlin Entertainment ploughing their money into it following a monumental 'human error' cock-up with the 'Smiler' ride at Alton Towers.

We walk in beautiful surroundings, looking out towards 700 acres of landscape where D H Lawrence set many of his novels. There's time to drop into The Crown at Beeston, with it's 14 real ales and a plethora of nooks and crannies.

I'm reunited with The Taxman on Wednesday evening. We're driving up to the old mining town of Blidworth in north Notts, to watch a Central Midlands South fixture versus Bulwell. The tea hut is perched on top of a hill. I've forgotten how good the view is from up here. It's a lovely game of football, and a tremendous advert for this League. Blidworth run out winners 3-2. I bump into Mickey Gould, one of the best youth scouts that has ever worked for me. Mickey is always good for a tuffie. I fleece him of a few Cough Candies for most of the evening. 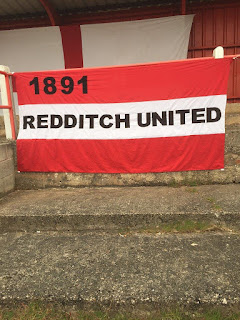 I've spent most of the week holed up in eastern England. Diss, Bury St Edmunds, Boston and Louth are all ticked off for business meetings. I've taken little interest in the Cheltenham Festival after spotting that Ryanair were sponsoring a few races; we have previous. It's a relief, on Friday evening, to sit in the comfy surroundings of the Crafty Crow on Friar Lane, opposite Nottingham Castle. I sup a couple of real ales, one of which is called 'Big Dipper' which has a salty caramel taste. Ms Moon and her daughter are sinking a bottle of Prosecco.

Sport Relief has a painful ending, the fishmonger's wife from Welwyn Garden City (Alesha Dixon) is comparing the fag end of the event - at least it reminds me to wash up.

Ms Moon makes me an Alta Rica coffee, as a bleary-eyed Sticky Palms makes his way down the stairs. She says that Murphy is enjoying the Brian Matthews radio show. How many more times do I need to explain it ? The legend's surname is Matthew, with no S in it. Golly gosh, Brian would be cross.

Brian is out of sorts today. I bang out a few tunes from my computer, one of which is Love Will Tear Us Apart by Joy Division. Ms Moon says she prefers the Paul Young version. It's a 'drop your bacon sandwich moment.' I feel a tear down roll down my cheek as she says it. Paul Young v Ian Curtis ? 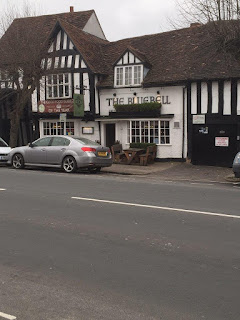 I flick through the Nottingham Post and notice that Rushcliffe Borough Council have released their latest hygiene ratings for eating establishments in the area. They choose to slaughter a recently refurbished pub with a one star rating, when the real story is a one out of five score for the Good Pub Guide 'Nottinghamshire Dining Pub of the Year' - the Martins Arms in the picturesque village of Colston Bassett in the Vale of Belvoir, where Stilton cheese is made.

We leave Radio 2 on for Murphy the budgie. He's asking whether Tony Blackburn will back on the Pick of the Pops show this lunchtime after his 'holidays?' 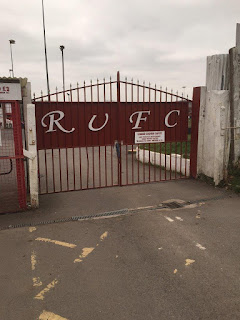 First port of call is the picture postcard town of Henley-in-Arden in Warwickshire. The Bluebell pub is situated on the High Street; it has a lovely ambience around the place. I admire the timber-framed dining room as I shout up a pale ale. We enjoy a 'Dirty Burger' as Bow Wow Wow, Japan, Blancmange and a string of 80s hits are piped through the pub speaker system.

We have a mosey about the joint. Not too many chains are around here, apart from the standard Costa Coffee shop. The Valley ground at Redditch is smack in the middle of the town centre. Ms Moon shoe-horns the Insignia into the corner of a pot-holed car park.

Redditch is a town in north-east Worcestershire with a population of 84,000. In the 19th Century, it was the centre for the needle and fishing tackle industry. In the 1960s, it became the model for modern New Town planning. Automotive retailer Halfords and engineering giant GKN both have their HQ in the town. 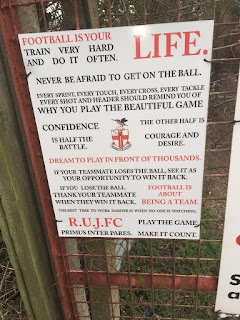 Notable people from Redditch include: Led Zeppelin drummer John Bonham, who was found dead at the age of 32 after drinking the equivilant of 40 shots of vodka at 40% ABV. Also from the town are: actor Charles Dance, Huddersfield Town striker Joe Lolley, Black Sabbath frontman Tony Martin and One Direction 'singer' Harry Styles. Redditch is twinned with the French town Auxerre. Redditch United were founded in 1891. Notable former players include: Scott Dann, Kevin Francis, Lee Hendrie and Matt Smith.

It's £10 on the gate and £2 for a programme. I love the ground to bits. We pass the snack bar and walk towards the double decker main stand, with its corporate hospitality on the second tier. The far end is open with the dugouts opposite the main stand. Behind this are six concrete steps with a covered terrace. Finally, behind the nearest goal is a terrace with red crash barriers and plastic tip-up seats to the rear.

There's a real community feel about the place. The junior teams are involved. Some of the signs erected tingle the back of my spine. One says, 'never be afraid to get on the ball.' We grab a tea and coffee and position ourselves between the two dugouts. The pre-match music is bloody awful (sorry DJ). The teams walk out to 'Into the Valley' by The Skids (best toon by a mile). 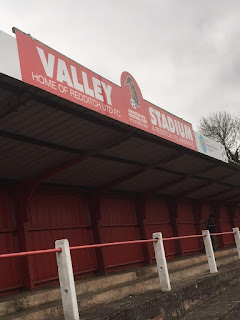 The first half is tense. Redditch hit the upright of the post as the visitors defend the slope resolutely. I get gassing to a couple stood next to me. Their son is playing for Redditch after being recently released by WBA. He looks out of sorts and dwells on the ball too long. Academy football is played on snooker table surfaces, players are rarely pressed and are encouraged to express themselves.

Histon had a player called Isiah Brown who they sold on to WBA, he ended up at Chelsea, and is currently on loan at Vitesse Arnhem. He's part of the What's App group that the 34 on loan Chelsea players participate in. 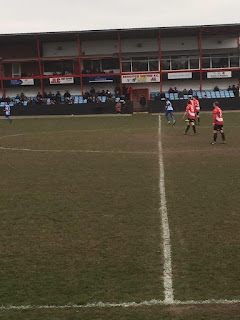 Settle-born John Newman's latest single is blasting out the PA as I head towards the loo. I chance upon 'Holte' (Villa fan) a black labrador draped in a Redditch shirt. The second half is far more entertaining as the strong smell of cannabis drifts up the terrace. Histon are lightning quick on the break, but piss poor in the final third. They are deprived of a deserved point in the closing stages when a pinpoint cross is headed home by Redditch defender George Carline.

Sam Ives did not play?