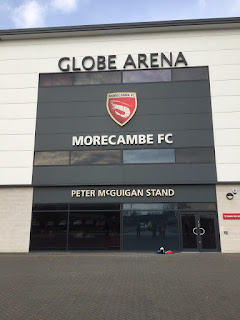 Hell's teeth, we're back on the M6 again. It's much kinder at 9am on a Saturday morning. Ground number 77 is Morecambe FC. We're parked up on the West End side of the seaside resort by 11am. There's no stiff breeze or bracing air, as the skies begin to lighten.

Morecambe is a town in Lancashire with a population of 35,000. It was known back in the day as 'Bradford by-the-Sea' due to its railway connections with Yorkshire. It was once a thriving seaside resort that has suffered decades of long-term decline. Both piers have bitten the dust. For a number of years the Miss Great Britain Beauty Contest was held in the town. 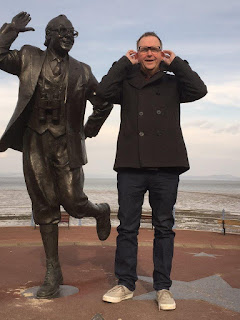 We walk past the Frontierland fairground that closed in 1999. All that remains is the Polo sponsored phone-mast that was once a remnant of the theme park. On February 5th 2004, 21 undocumented Chinese migrant labourers, hired to pick cockles at £5 for 25kg, by Chinese Triads, trafficked in on containers that docked in Liverpool, were found dead after being cut off by an incoming tide.

Ms Moon and I join a small queue at the Eric Morecambe statue for a photo-shoot. Morecambe took his stage name from the seaside town.  Other famous folk from the town include Dame Thora Hird  and 'Charity' from 'Emmerdale Farm. World heavyweight champion Tyson Fury is from the area.

A group of 'Carlisle Casuals' are being escorted down the front. They're ushered into the King's Arms by the local plod. We call in at The Palatine, a comfortable Edwardian seafront pub. A Lancaster Blonde accompanied by a three piece deli - including Garstang blue cheese and honey roast ham ensures we have an enjoyable lunchtime. The landlord and staff are first-class. 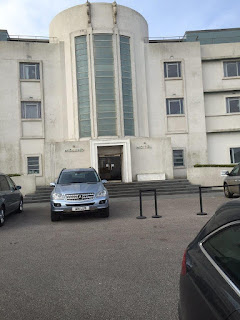 My mate, Piers, has tipped me the wink about the glorious art deco hotel the Midland Grand Plaza. It had a £7 million re-fit in 2008. I have a craft beer from the Shipyard brewery in the USA. We sit in Chesterfield leather armchairs looking out onto Morecambe Bay, where those poor, unfortunate souls lost their lives .

Within ten minutes we're parting with £4 cash to park at a local primary school. Lancastrians are well known for their warmth, friendliness and humour. This is all in evidence on our arrival. It's £16 to stand on the Northern Terrace and £3 for an info-packed programme. On each occasion we are told to 'enjoy the game.' 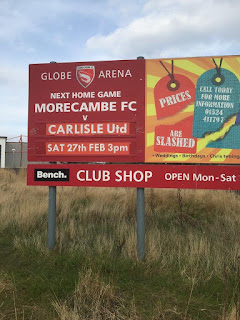 I get gassing to a steward adjacent to the turnstile. He lets it slip that a Carlisle player has driven through the gates in a Maserati. He jokes that a Morecambe player can't even afford a Mini. It's like our usual fix of Non League, we're close to pitch-side, as there are only a few concrete steps on the small terrace. Carlisle's players are put through a strenuous warm-up routine which leaves us all gasping for air. Bowie, Blur and Blondie are blasting out the PA. Inevitably 'Bring Me Sunshine' by Morecambe and Wise is the signature tune.

I donate some money to the Prostate Cancer charity. The volunteer is a lovely chap called Michael Parker. He gives me a potted history of the area including Fleetwood and Heysham - everybody is so friendly. The scoreboard to our left has been donated by Heysham Power Station in memory of Chris Cowan who plunged to his death from a platform in 2010. Chris was a lifelong Morecambe fan. 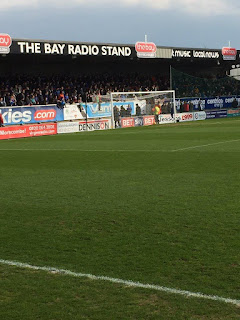 I notice that Nathan Bondswell is on the subs bench for the Shrimps. He's a Nottingham lad. I remember when he was a 12 year old at Clifton All Whites, a club that produced the likes of Jermaine Jenas and Jermaine Pennant, that every club in the Midlands was tracking him. He finally chose D***y Clownty, who recently released him.

Morecambe play a beautiful game that belies their lowly league position. At the hub of it all is the engine driver, Irish forward Jamie Devitt, who I clocked playing for Hull City as a youngster seven years ago. Seasoned pro, the well-travelled 37 year old Kevin Ellison, escapes his marker and deftly chips over an advancing 'keeper to give the Shrimps a deserved lead. They play some lovely pass and move football, pretty much passing Carlisle off the park, as the visitors go route one with two huge powerhouse centre forwards. 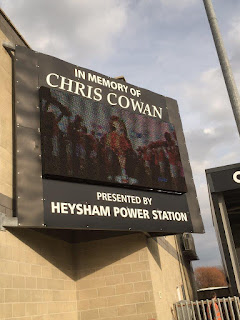 The 1500 travelling support are unimpressed. They start to sing a few derogatory songs about their own team. We've been impressed with the Carlisle skipper, Michael Raynes. He cajoles and encourages his team-mates. He marshals the troops forward, as they often sit too deep.

The fire alarms go off at the break. Sponsors spill out of the corporate hospitality suite as panic sets in. It is believed an e-cigarette has set the alarms off. I'm inclined to think that Carlisle manager Keith Curle has set some fireworks off in the changing room to awaken his lacklustre under-performers. Ms Moon returns from the snack cabin with a steaming hot cup of Bovril.

Carlisle up the tempo and start to play. A corner from the left is met first time by McQueen as he lurks on the corner of the penalty area, his effort whistles over the bar. 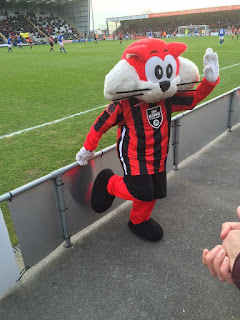 Morecambe seem happy to see the clock tick down as Curle injects some pace into the game with the introduction of ex Lincoln City winger Derek Asamoah. The Morecambe sub never looks switched on, he bundles over Wyke, who makes no mistake from the spot. One minute later the game is turned on its head with Asamoah smashing home a loose ball to send the visiting support into pandemonium. Blue flares are set off, as the police converge.

Curle, the coaching staff, players and supporters celebrate as one at the final whistle. Keith Curle is a good manager, and seems to have put in a good infrastructure and instilled discipline. I never quite understood why he lost his job at Notts County.

Nothing is going right for Jim Bentley's Morecambe, as they nervously and agonisingly glance over their shoulders at the relegation pack in League Two. Bentley made nearly 300 appearances for the club, and has been at the helm since 2011. Remarkably the Shrimps have only had three managers in the last 22 years. They are a wonderful family club with all the right values. A worried steward returns to speak with Ms Moon to apologise about saying we all might have to evacuate the ground at half-time. It's a nice touch that, and pretty much sums up the day.

Man of the Match: Kevin Ellison

Great blog, thank you for such a positive article, and thanks for donating to prostate cancer, I was in charge of the team Michael told me he had had a lovely chat with a new nice man who was from Nottingham.