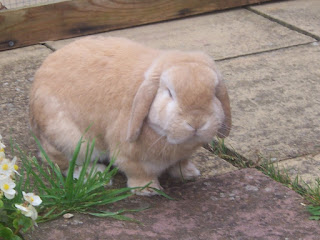 I'm on the M6 in standing traffic. I've spent six rotten hours on this bloody God forsaken stretch of road today. I arrive back at HQ at 6pm. I fish my phone out of my pocket and scroll through the texts. My heart misses a beat. I draw a sharp intake of breath. It's news that I've been dreading all week. Blog legend Finley Palmer the rabbit, and crap Non League tipster, has been laid to rest. He would have been the grand old age of 10 years old in August.

His crap tips have featured in this blog for over nine years now. His final one, last week, was ironically 0-0. The game ended 1-0. Finley was so close to being on the money, time and time again. A few years ago Rammers and I watched Real United take on Holbrook St Michaels down at Stoke Lane. Finley had it down on the correct score coupon for 4-4, which ironically was the score after 95 minutes. Finley had logged onto his laptop and had just pressed the button for his basket full of carrots to be delivered from Waitrose as the big Holbrook centre forward nodded home the winner in the 96th minute. Old Fin never really recovered from that day. God bless his soul.

Last Saturday evening was spent in the Trent Navigation and The Embankment near Trent Bridge consoling the Nottinghamshire football-watching public following defeats for 'You Pies' and 'You Reds.' We're both still chuckling about the Bromsgrove PA announcer last Saturday. The visitors make a substitution in injury-time at 1-0 up. The lad coming off was dragging his heels. The guy on the PA shouted out "Hurry up and get off the pitch." 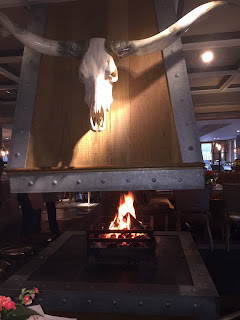 On Sunday we have a lung-bursting walk around Gedling Country Park, followed by a drinky-poo in the Bread and Bitter on Mapperley Top. You can't beat a pint of Castle Rock's Elsie Mo. I drop into Clifton All-Whites on Tuesday evening. They are entertaining Wollaton FC in the NSL Senior Cup. Both squads are skinny. Clifton hang onto a 1-0 lead until the dying embers of the game, when their ten men run out of steam, with Wollaton taking full advantage to the win the tie. If they dished out Olympic gold medals for moaning and chuntering at match officials, then Wollaton would have come on top of the leaderboard. They did play a beautiful game of football though.

It's been another long week on the road. The 'Rolls Royce' has visited Stockport, Chester, Brigg and Louth. I've a road-trip booked to Ireland too. We wind down for the weekend in the Bear and Lace, before dining out at my favourite establishment, The Round House on Royal Standard Place, where I enjoy two pints of Tribute from St Austell in Cornwall.

Game day finally arrives. Ms Moon has got the hump. We played 'guess who' the other night, I presume most couples do ? After grilling me for a good ten minutes she finally gave up. The answer was Bouncer the dog off Neighbours. I can't arf pick em.

We're back down the M42 for the second consecutive Saturday. Destination is the gastro pub the Queens Head in the Worcestershire village of Stoke Pound. The place was stacked out with folk last week, so we didn't get time to eat. Lily Allen's 'The Fear' is on Magic Radio as we pull into the car park. It makes me feel like swallow-diving into the nearby Birmingham Canal.

We hook up with Ms Moon's sister, Kate, for lunch. A cloudy pint of Wyre Valley IPA is changed without fuss. The scran is spot on. Ms Moon and I have stone-baked pizzas. Lye Meadow, the home of Alvechurch FC is only a few miles away. They are chasing down Midland League leaders Hereford FC, and have games in hand. 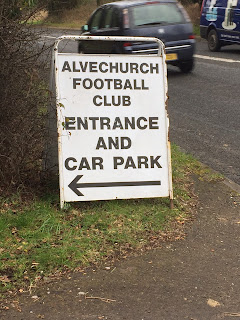 Alvechurch is a village in the Bromsgrove district of Worcestershire with a population of 6500. Its nearest city is Birmingham, which lies 11 miles north. The novelist Fay Weldon and The Archers creator Godfrey Baseley are from the area. Former Leicester City and Arsenal striker Alan Smith once played for Alvechurch. He scored 199 career goals, and is now a pundit on Sky Sports.
Tracey Andrews is also from the village. She murdered her boyfriend Lee Harvey in 1996. It was a high-profile court case, where she blamed the murder on a 'road-rage' killer.

It's £5 on the gate. The programme is top drawer at a bargain-priced £1. We're not enticed or drawn to the burger van. We head over to the far stand. I get chatting to the referee's assessor, he's a lovely bloke. He was at Bromsgrove last week, as we were too. I compliment the official from that game. The guy's all tooled up with his laptop. Clifton's manager 'Tosh' drops me a call. Have I got a pair size 10 boots in the car ? Yes I have, but I'm 60 odd miles away. I tip him the wink that NSL table-toppers West Bridgford have been turned-over by Bingham Town. 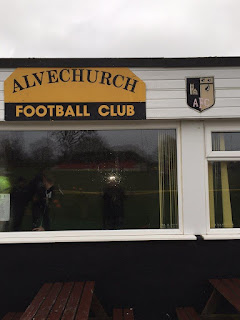 R 'n B is haunting me on the PA system. The DJ recovers the situation with Irish singer-songwriter Hozier. The teams emerge from the dressing rooms. There is a gorgeous vista of the rolling Worcestershire hills in the distance, as we hear the loud shrill of the referee's whistle as the students kick off.

I saw a first year student from Loughborough put a shift in for UCL team Harrowby United in Step 5, the same level as the Midland League, a few months ago. He's already notched 20 goals for the season, but has not played for a while due to a serious injury. He attended trials at the Uni along with 300 others. He wasn't spotted - couldn't even get in the 4th team. Oh dear oh me!

It literally is men against boys. Alvechurch are 2-0 up in the early stages. The second goal is beautifully crafted on a pitch you could grow potatoes on. We viewed Alvechurch earlier in the season in a FA Vase 4th round tie up at Cleethorpes. They folded like a deck of cards that day, after controlling the game in the first half. There is to be no repeat of this today. The game is put to bed at 3-0. The students score a smart consolation goal, but they don't have any fire in their bellies. 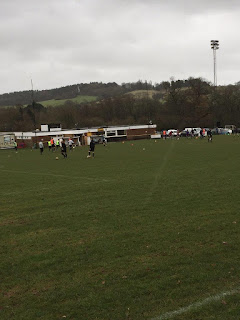 We have been amused with the body language of 20 goal Alvechurch striker Jordan Nadat. He's fluffed a few chances and is getting frustrated, which results in an inevitable yellow card, before trooping off after being hooked by the manager. He rips off his sock tape and removes his shin pads. We can see he is distressed. "What's the matter?" I enquire. We engage in conversation. Turns out Ms Moon and Jordan are both in the healthcare recruitment game. They compare notes and talk shop. I'm trying to watch the bloody game here. They exchange email addresses. Christ, it's like being on 'Take Me Out,' with Sticky Palms playing the part of Paddy McGuinness. Why not discuss it over dinner at the Queens Head in Stoke Pound ?

The raffle numbers are announced, it's my third win in 10 years. Coincidentally its a Midland League hat-trick. Ms Moon is dispatched to the clubhouse for the presentation of the cheque. Disappointingly, she arrives back with three miniature bottles of wine.

Alvechurch drive home the final nail in the coffin. Jordan waves us goodbye, 'we' promise to be in touch. He was a really nice lad.

Man of the Match: Finley Palmer

I'm sorry to hear about Finley - it sounds like he had a good life.