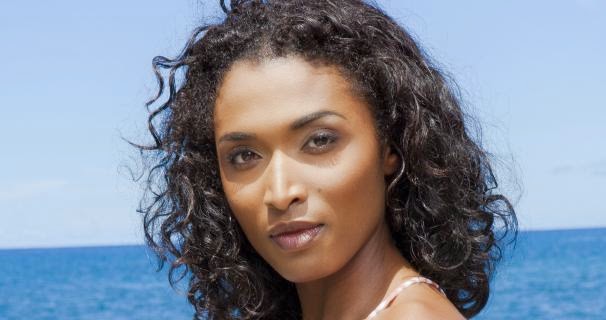 It's Thursday evening, 9:00pm and the highlight of the week. Murphy's cage is positioned next to the arm rest of the settee, with a bird's eye view of the TV. He's flapping away at the Ska theme tune to hit TV series Death in Paradise. He (and me) are totally smitten and loved up with Detective Sergeant Camille Bordey from the show. She's an absolute beauty, with a cracking pair of pins. I was flicking through the Sunday Mirror TV guide, when I clocked that Camille is to exit the show this evening. Who's going to tell Murphy ?

Fast forward 55 minutes and Camille is boarding a ferry from the quayside to the mainland, as she's accepted a job offer in Paris. Why the hell did the Detective Inspector sign the release papers? I couldn't tell Murphy; it would break his heart. He's blubbering now and so is Sticky. It won't be the same without her.

It's two days since Murphy touched his food. He's proper off it. Camille leaving the show has left the wee man in bits and lovesick. My God, we miss her. Last night I nursed a pint and a half of Two Hoots from the Joseph Holt brewery up in Manchester. I'm celebrating a successful month end with colleagues from work. Mrs P joins me later  for a bite to eat in the Ruddington Arms, following a good write-up in the Nottingham Post by the Food Sleuth. 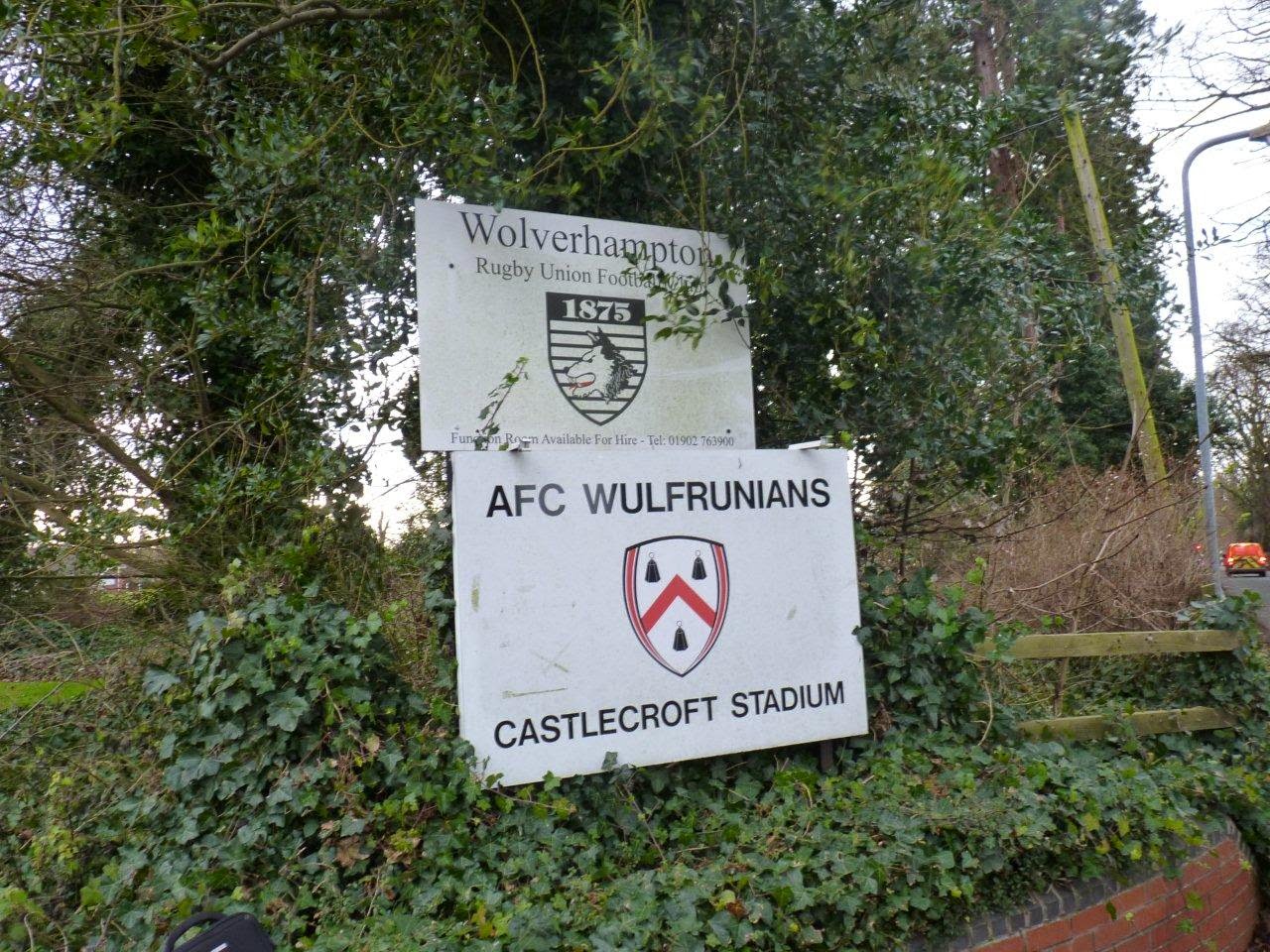 The forecast for Friday night and the early hours of Saturday morning looks very bleak for us groundhoppers around the UK. The North is off the radar. The Midlands has a blanket of snow. Not many hoppers will be wearing their parkas or rucksacks tomorrow. The sandwich boxes and programme covers will remain empty. I wake up on Saturday morning and draw back the curtains, the snow has gone.

Mrs P heads out early doors to Loughborough to buy some candles. If only life was that simple. I ask her to pop her head through the door at Waterstones, to make sure all the staff I stalked for the the last six months are okay. Murphy is swinging on his perch to 'Boogie Wonderland' by Earth, Wind and Fire. My twitter timeline is full of games off and pitch inspections.

I make a cup of strong coffee and microwave a sausage roll. Murphy mops up the flakes of pastry. He's slowly regaining his appetite. Redditch and Brocton have both bit the dust. AFC Wulfrunians are saying on their twitter feed that there are no plans for a pitch inspection. I have to look them up to see where they are located. Wolverhampton is not too far for the 'Rolls Royce.' 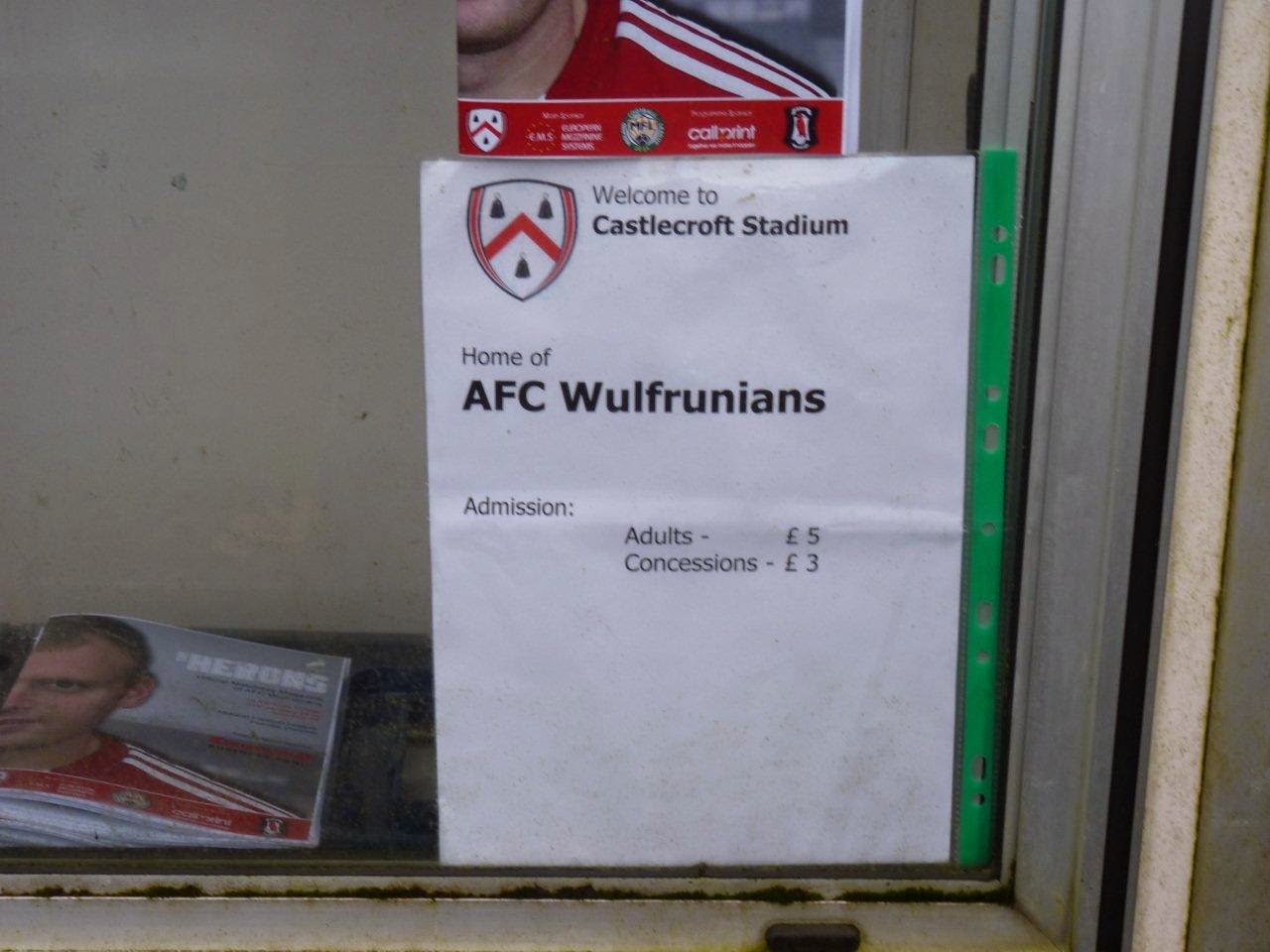 They are previewing the over-hyped 'game of the season' between Chelsea and Man City on Five Live. Pundits over analyse it. It's no coincidence that Match of the Day had their largest viewing figures of the season last Saturday evening when giant-killers from Bradford and Middlesbrough rolled into West London and Manchester. The Premier League is not for me, although I still need to chalk off Anfield.

It's not the most enjoyable of journeys. The drive to Birmingham can be a chore. I pull off the M6 towards Wolverhampton. After skirting Wolverhampton town centre, I find myself in the suburb of Castlecroft. I'm not banking on a Good Pub Guide entry in these neck of the woods. I swing the 'Rolls Royce' into a ghastly looking pub car park opposite one of those ugly 1960s shopping precincts.

The decor in the pub beggars belief. A woman from the 'Darby and Joan Club' is ordering snap for the whole of Wolverhampton at the bar. Each one is paid for separately. After what seems an eternity I finally get my paws on a pint of Boondoggle from the Ringwood Brewery in Hampshire. The old blue rinse brigade are tucking into their 'Lunch Deals.' I think I'll give the snap on offer the swerve. 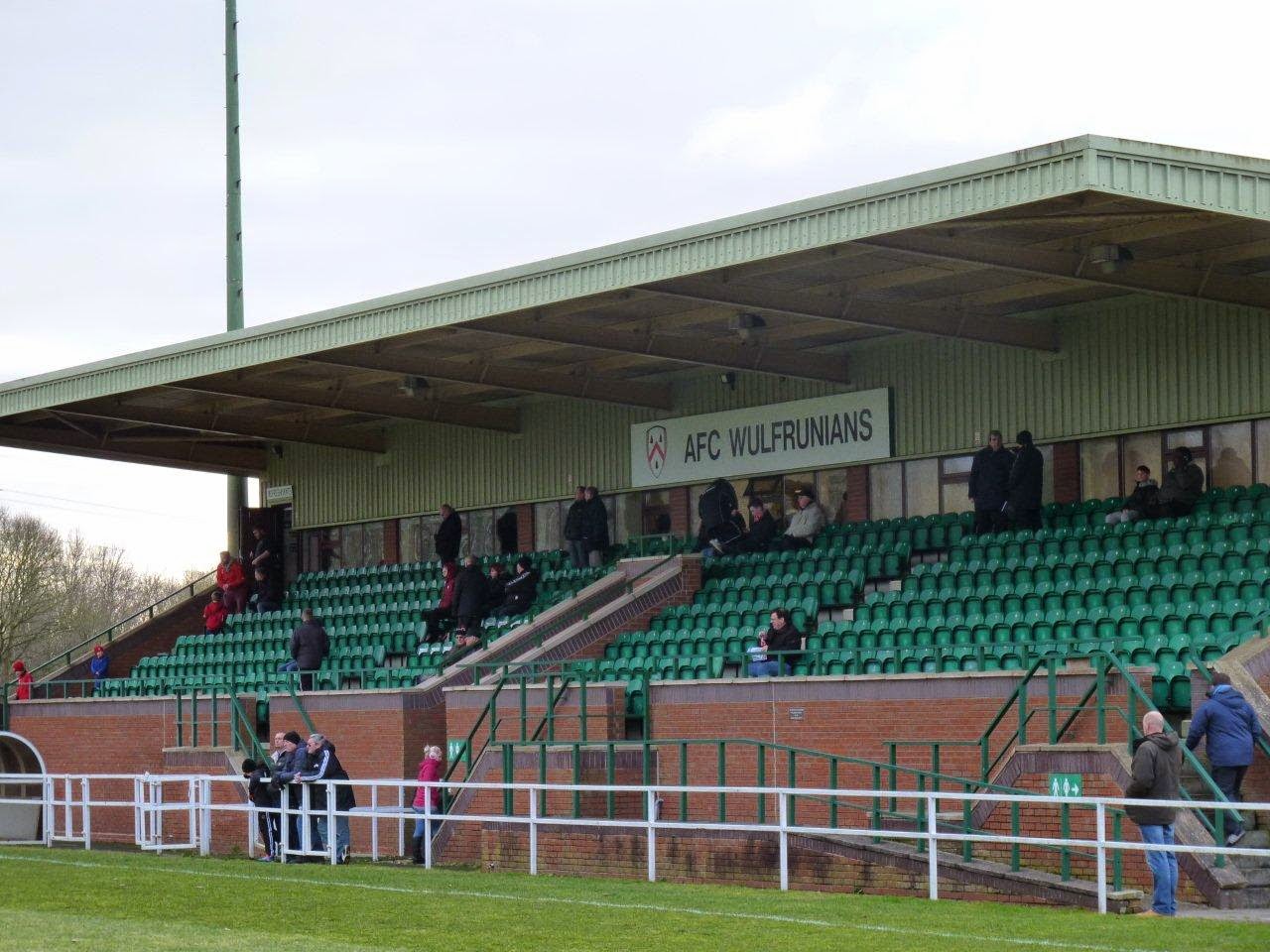 The Castlecroft Stadium is just down the road. I pass a desolate cricket ground and some posh apartments with electric gates, before squeezing the 'Rolls' into a parking space. AFC Wulfrunians were formed in 2005 and were an offshoot of Old Wulfrunians founded in 1922.

The stadium was previously the RFU's national centre for schools and youth rugby. Back in the 1950s it was Wolverhampton Wanderers training ground. It's £5 on the gate. The programme is a bargain at £1. Someone takes a lot of tender loving care in producing this programme. I fluff the quiz, which shows 8 pictures of former Nottingham Forest players. One of them has long frizzy hair, with Mediterranean looks. I take a stab at Nikola Jerkan. It's that bloody buffoon Andrea Silenzi. NFFC coughed up £1.8 million for this joker; he didn't even score a League goal.

My new blue coat, a bargain £45 from Next's Victoria Centre branch in Nottingham, is getting its first airing. It's catching the eye of one or two WAGS, I can tell you. I'm impressed with the stadium although you only have access to three sides. A 500 seater stand with green tip-up seats dominates the nearest touchline. A neatly trimmed privet hedge is the main feature behind the nearest goal. The far side is tree-lined and where the dugouts are situated. 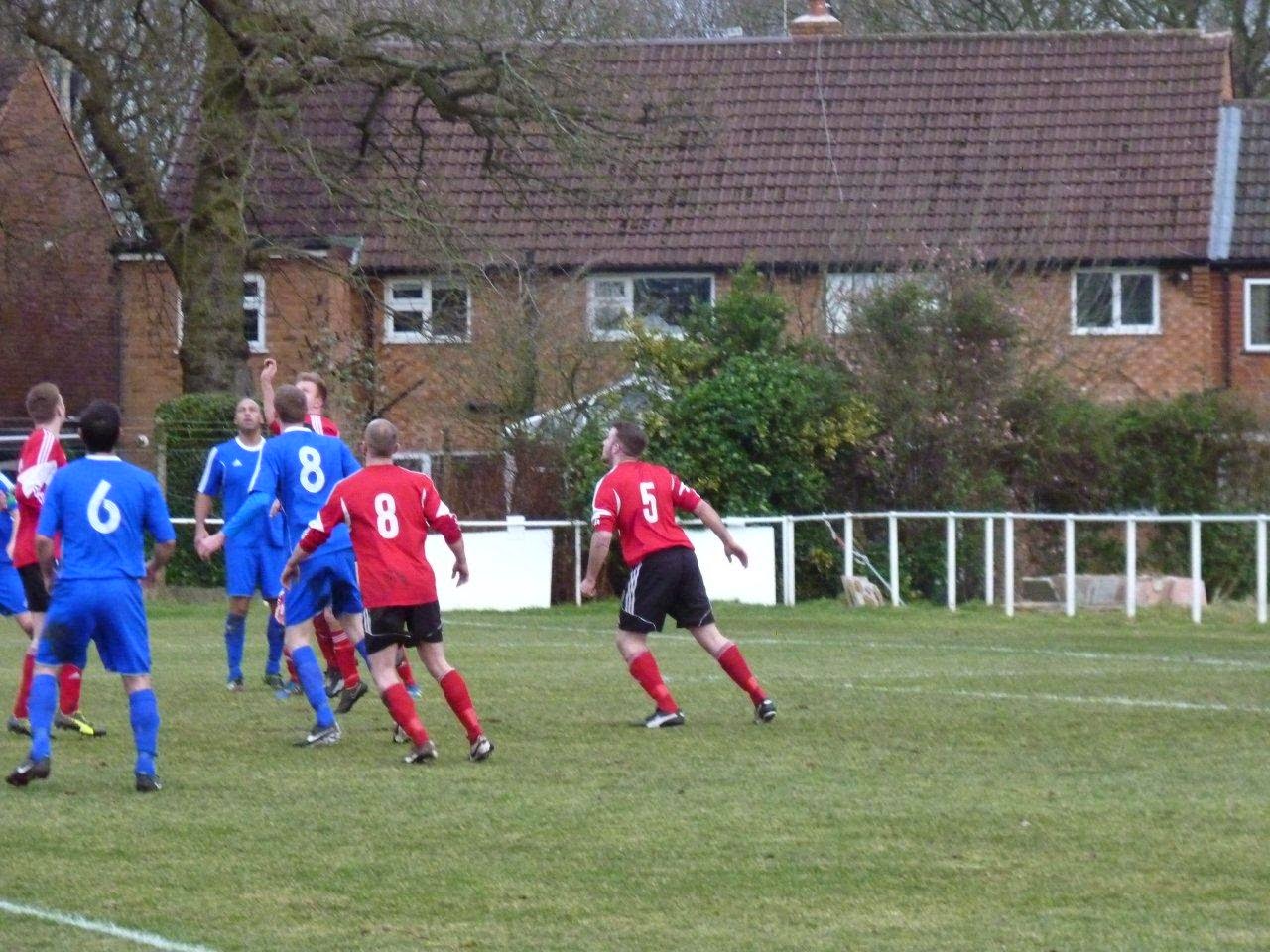 It's bitterly cold, I've four layers of clothing on, but I've a feeling I may have under-clubbed. Finley the rabbit has predicted a 7-0 drubbing for bottom-placed Tipton Town. Don't worry Tipton fans, old buck teeth knows chuff all about Non League football.

The swirling wind makes it difficult for either team to keep the ball on the carpet. Both see efforts bounce off the woodwork, before the visitors take the lead with a well executed goal from Nicky Pugh. Half-time can't come quick enough as I peg it up the stairs into the cosy refreshment bar. I warm my hands on a cup of steaming hot salty Bovril. The cheese and onion cob at a £1 a pop is better than anything that bloody pub up the road has to offer.

I'm reluctant to leave the clubhouse as I've shivered my way through the first half. Tipton upset the apple-cart with 15 minutes remaining, David Meese waltzes his way through a static defence before curling his shot into the corner of the net.

The under 9 balls boys are in stitches behind the goal when the Tipton keeper' shanks a clearance and ends up flat on his ass. They'll still be giggling this evening about that one.

Man of the Match: Ball Boys
Posted by Sticky at 7:11 PM