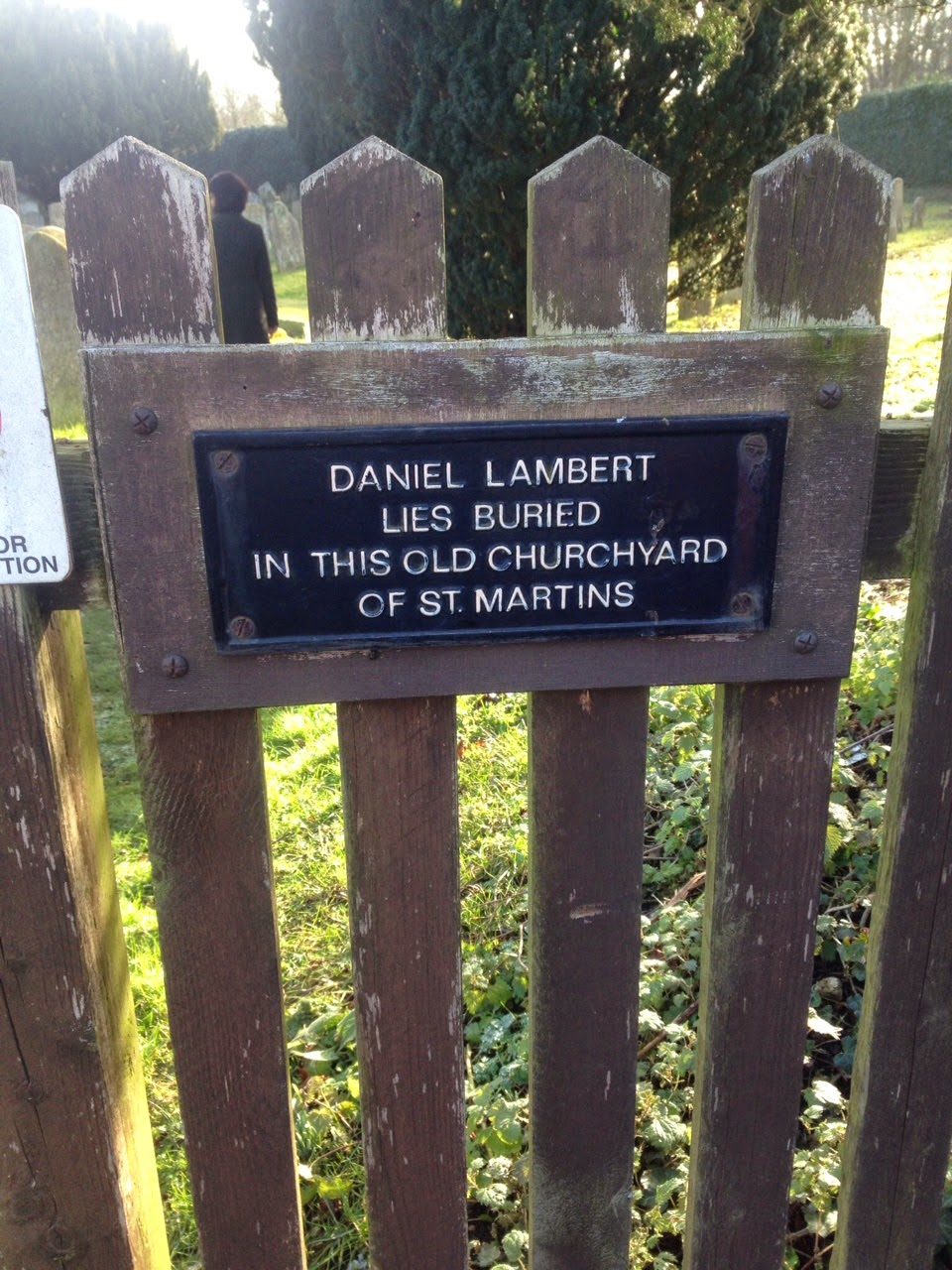 This is ridiculous, where the hell can he be ? I'm on the High Street in the picture postcard town of Stamford, in Lincolnshire. I've spotted a sign pointing in the direction of Daniel Lambert's grave. Lambert weighed in at a world record 52 stone when he died suddenly in Stamford back in 1809. His coffin required 112 square feet of wood. It took twenty men half an hour to lower his coffin into the ground. Why can't I find the 'Lord of the Pies' final resting place?

The Sunday morning congregation are filing out of St Martin's church. An elderly lady tells me to walk through the graveyard, cross the road and I should see a plaque on the railings. She's right, I've finally found Lambert. The lettering on his headstone has washed away. It's mission accomplished for Sticky Palms.

A pleasant weekend in Stamford was spent at the glorious Crown Hotel. A stroll around Burghley House in sun-kissed skies and unseasonal temperatures was an unexpected bonus. 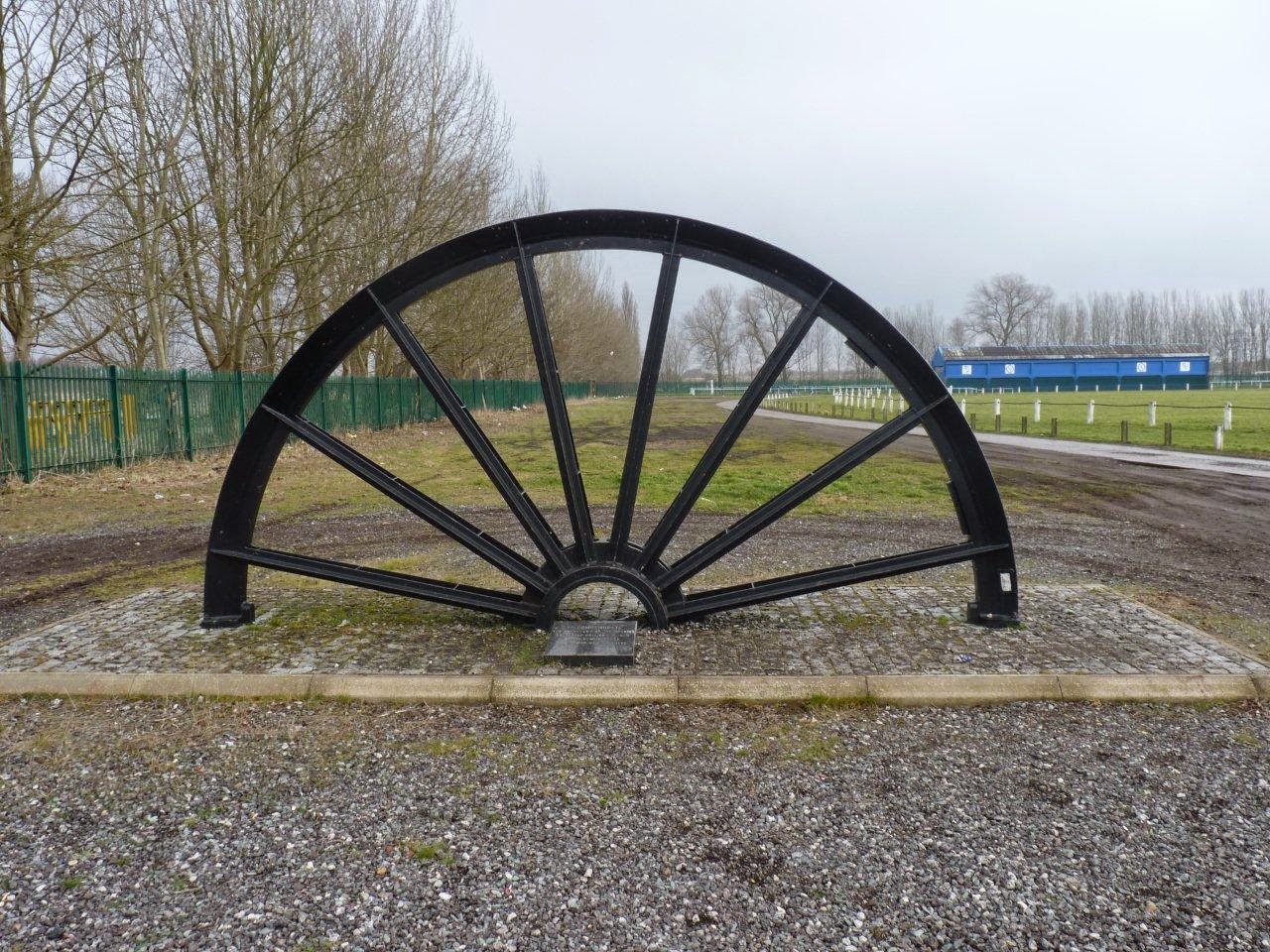 I take in a Notts Senior Cup tie between Basford United and Dunkirk on Tuesday evening. Both teams play a beautiful game. 37 year old former Aston Villa midfielder Lee Hendrie turns out for Basford. It's worth the £5 on the gate to watch his movement. How on earth Dunkirk are bottom of the Midland League, on that performance, Lord only knows.

On Thursday evening I watch 'The Skipper' get a much-needed 90 minutes under his belt for Dunkirk U19s. He thoroughly enjoys it and hooks up with some mates he hasn't played with in ages. We leave Murphy the budgie at home. The traitor will be whistling the signature tune to BBC1's Death in Paradise. We had a pact not to watch it any more after DS Camille Bordey took up a secondment in Paris. Murphy now has the hots for her replacement.

We're still not speaking on Saturday morning, as I switch the kettle on and flick on Sky Sports to watch the cricket World Cup. I watch the wickets tumble one by one. The diminutive James Taylor shows some bottle as he racks up an unbeaten 98. He's robbed of a ton by some inept umpiring. 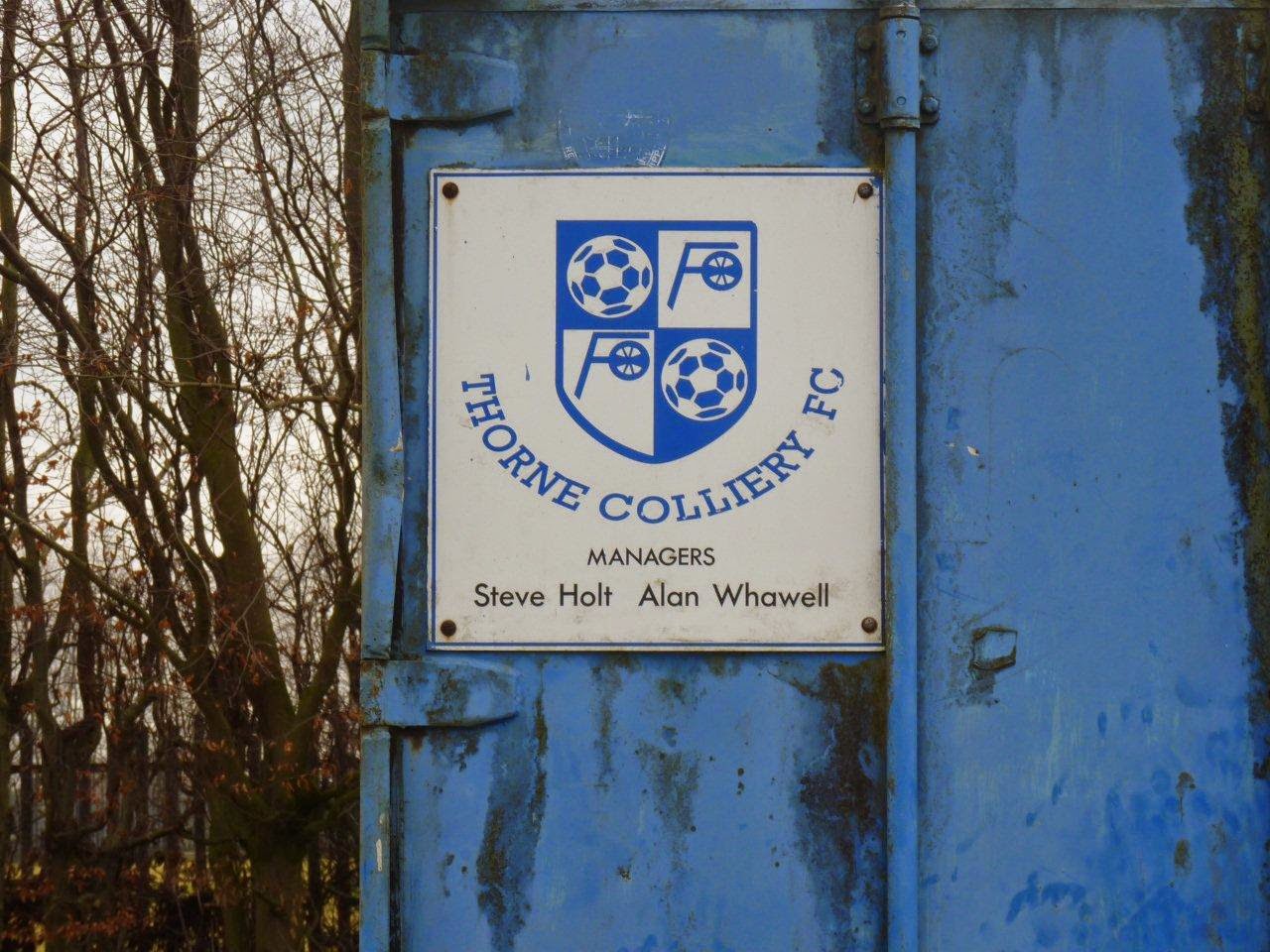 I leave Sticky jnr polishing his boots in anticipation of a mouth-watering quarter final League Cup tie against neighbouring Cotgrave. I whizz up the A46, over Gunthorpe Bridge and onto A614. I breeze up the A1 and onto the M18 before turning off for Thorne.

Thorne is a market town in the Metropolitan Borough of Doncaster with a population of 16,000. The local coal mine was closed in 1956. Soprano singer Lesley Garratt and the plumber Thomas Crapper were born in the town.

I like to see the good in everything. The town centre looks like it could do with a make-over. Cameron and his cronies have let the place to go to wrack and ruin. Where's the coalfield regeneration money been pumped into? I drive past 'Sweets 'n Treats' , the 'e-cigarette shop (with e-liquid accessories, 'JJ's Bits and Pieces' and Paul's Polish Food Shop.' There's an uninviting tea rooms and a large Co-op. I head out towards the country before chancing upon the Black Bull Inn. 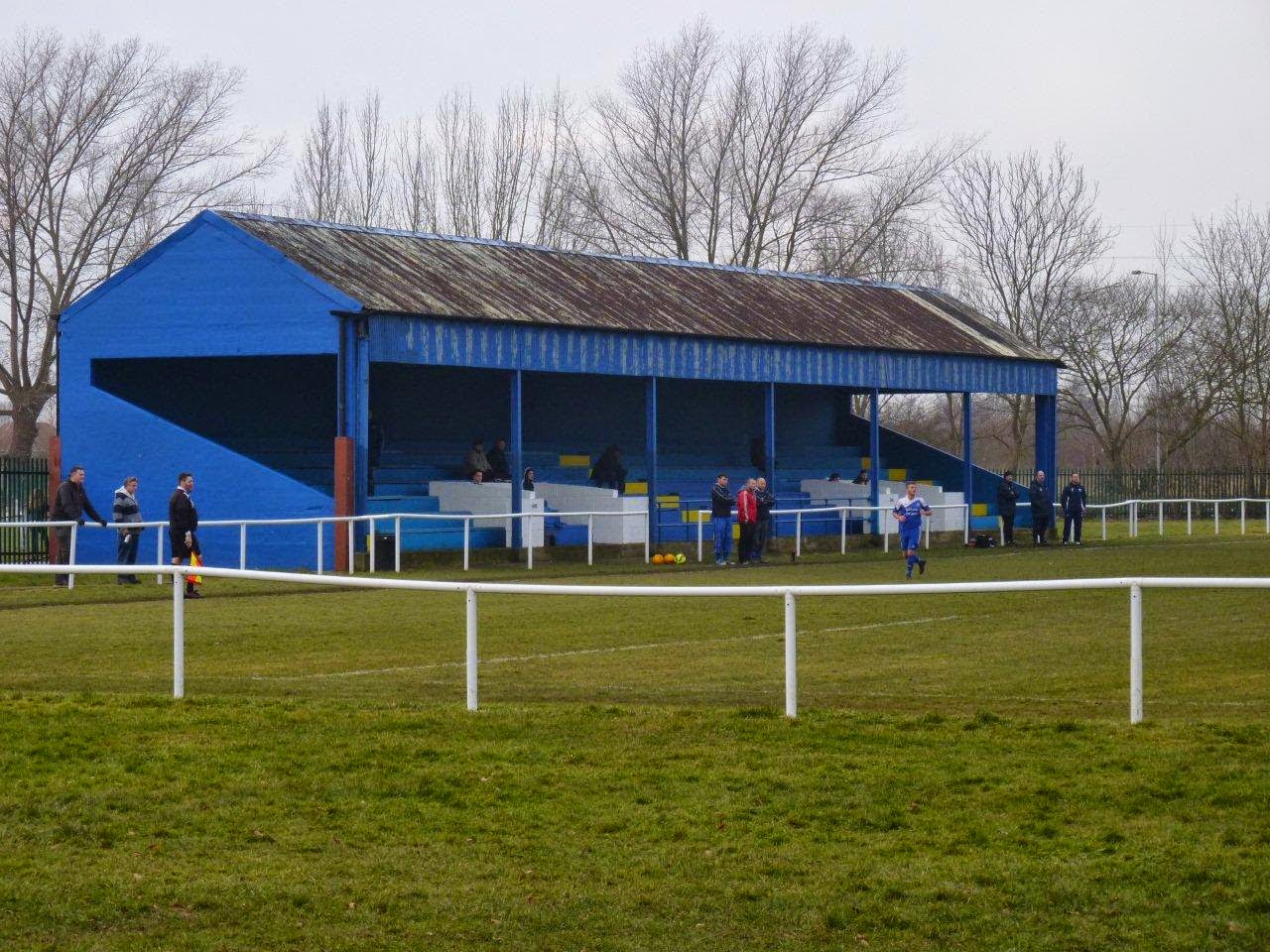 It's a pleasant enough pub, but they only serve Sharps Doom Bar and don't have any strong lager on. I thought they could sup up here ? I down a pint of Guinness. I can't even get a bloody sandwich in the joint. Thorne Colliery's home is in the neighbouring village of Moorends. If you're a big fish 'n chip fan it's the place to be - take your pick from 'Cod Almighty', 'Crispy Cod' and 'Golden Cod.'

I drive past the old colliery winding wheel, with it's memorial plaque dedicated to those who lost their lives at the coal mine. The players are kicking-in as I part with £3 on the gate and £1 for a programme. A huge blue-painted stand with yellow-coloured steps is the main feature of the ground. It looks magnificent. I grab a cup of coffee and a bacon sandwich.

Carver (Jim's lad off The Bill) puts the visitors 1-0 up early doors. It settles Sticky down - I don't do 0-0s. It's a groundhoppers dream on ten minutes,when I get my mucky paws on the match ball. Carver fluffs a couple of sitters as Brodsworth continue to dominant the game. 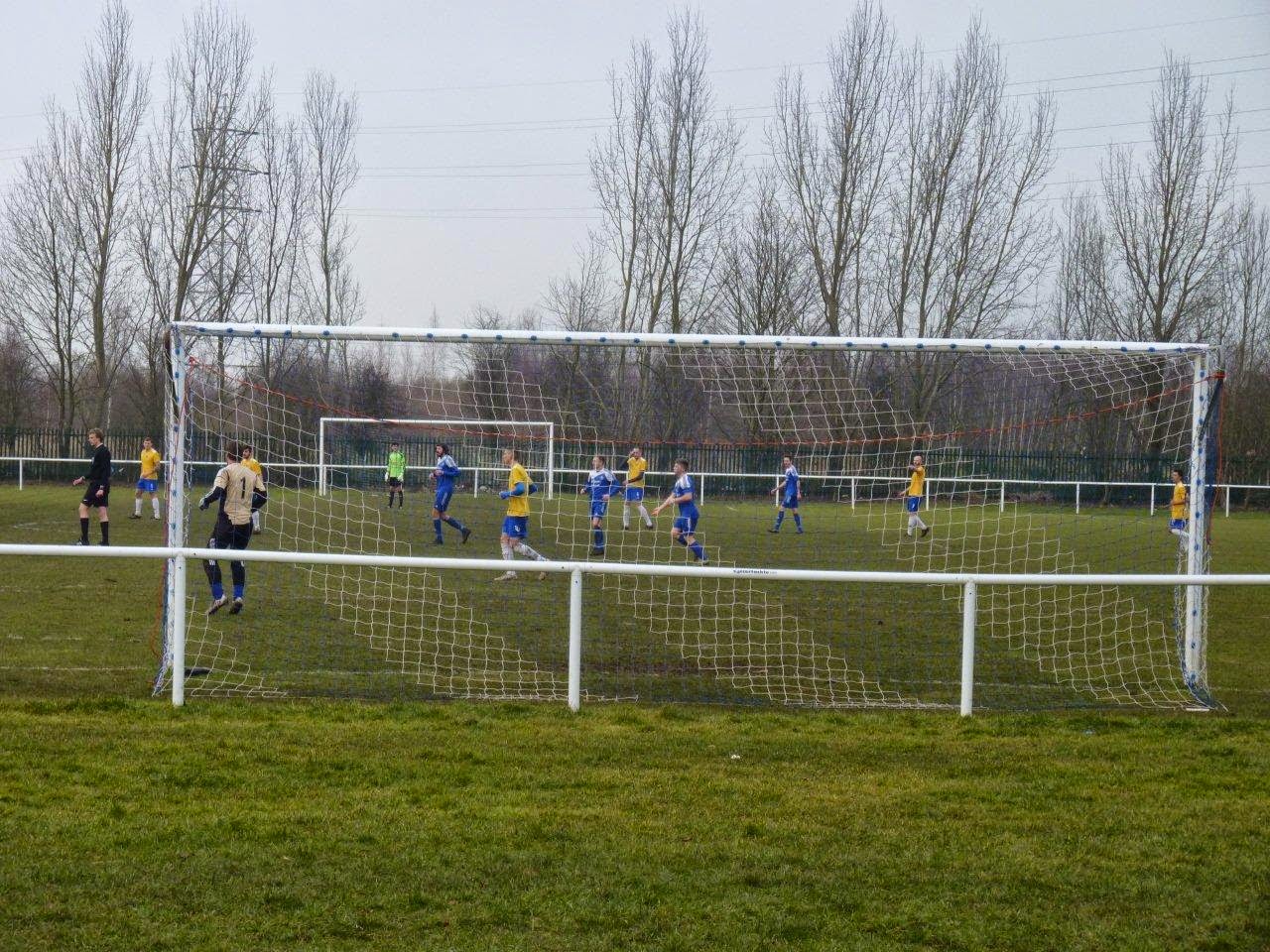 The Thorne No.7 looks like a gangly version of the former Argentinean international and Tottenham Hotspur midfielder Ricky Villa. Sadly his performance is more like Ricky Butcher.

I'm at a bit of a loss at the break. I'd be normally scrolling through my twitter timeline checking the half-time scores. They haven't got floodlights here, so have kicked-off at 2:00pm. A game of jumpers for goalposts has attracted my attention. The boys playing can only be aged 10-11. It reminds me of the classic film Kes. There's plenty of swearing going off and a temper tantrum or two. A boy is wiped out. There's a slight skirmish. The wee lad is streaming with tears as he gathers his jumper, collects his scooter and storms off, threatening to bring back his big brother. I hope it's not 'Our Judd.'

Thorne equalise from the penalty spot early in the second half. They can only hang on for a few minutes. Luke Flanagan spots the Thorne 'keeper off his line and from 25 yards out superbly chips the ball over his outstretched arms and into the net. Corey Taylor appears to put the result beyond doubt following good work by Junior PC Carver down the right touchline. Thorne score again, with the visitors in debt to their 'keeper with two fine saves towards the end of an entertaining game.

Man of the Match: Billy Casper
Posted by Sticky at 8:04 PM