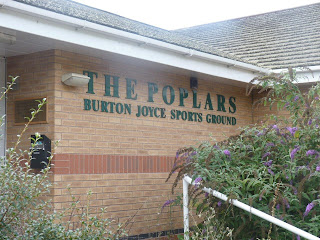 It’s been a while since I stayed local. I spot that Sileby Town are playing host to Rothley Imperial in the Leicestershire Senior League. The Taxman picks me up on another glorious late summer’s evening. Within one mile of driving we’re pulled up stationary on Laming Gap, with hazard warning lights on, close to the village of Stanton on-the Wolds.  All the needles on The Taxman’s car are throwing a wobbly. It’s like the Clapometer off Hughie Green’s Opportunity Knocks – “I mean that sincerely folks.” At this rate we’ll be travelling like the Anthill Mob off Whacky Races.

We pull into the Memorial Ground off the Seagrave Road as the players are exiting the changing rooms. I spot the dad of a lad who I once scouted for the Pies. He’s an Elvis impersonator. He was ‘All Shook Up’ about the 2-0 reverse for his lad’s team. The highlight of the evening was another ‘Swampy’ type character shimming up a tree to retrieve another alehouse clearance. And also a superb brew, poured from a steaming hot pot. Yes, Sileby have set the mark in mashing tea.
It’s Friday morning and I’m in the zone at work listening to Colin Murray on Talksport. He’s promoting ‘Non League Day.’ I send a tweet in to say I’m off to the Notts Senior League game at Burton Joyce tomorrow. It’s read out on air. Former Arsenal striker, Perry Groves, is amused by the name Burton Joyce. He’s says it sounds like an old married couple. 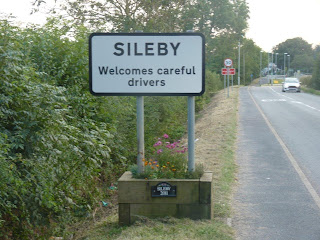 Saturday morning is spent flying up to the north of the county, to the League Registrar’s bungalow, signing players on for the two sides that I run. We’re short-staffed and lacking playing time. I view a game up at Kimberley Leisure Centre and bump into legendary Priory Celtic secretary, John Harris. He is looking rather flash in his new Notts County sweatshirt, a birthday present from the family.
It’s The Skipper’s team’s first league game of the season. We’re light on numbers and have a few round pegs in square holes. It’s a 4-1 thumping for a sulking Skipper. I head out of Platt Lane, down Tollerton Lane and onto the Colwick Loop Road. Rugby Union is on Five Live. I switch over to Radio Nottingham – known in a previous life as ‘Radio Red, before the ‘Media Blackout.’ They’re covering Mansfield Town’s long trek to Newport County.
I turn right off the main drag, past a swanky barber's and over a railway crossing. Burton Joyce is a commuter village on the outskirts of Nottingham with a population of 4000. Coronation Street actress Sherrie Hewson and the actor Mathew Horne were both born in the village. 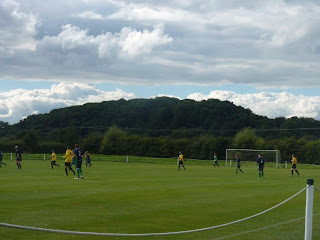 The teams are heading out to the far pitch. Two guys are scarifying the cricket pitch with two mowers. I slump to the ground on the halfway line and stretch my legs, as the sun lights up Colwick Woods. Jibs on the cranes, dominating the skyline, swing in the distance. The pitch is roped off, with the playing surface looking lush.
The NSL is Sticky’s favourite league. My village Keyworth are a founder member. I took in a game at their Groundhop at Selston last spring and saw a classic 2-2 draw against Wollaton. I recognise the referee immediately; it’s none other than County Councillor, John Cottee. Cracking lad John is, always lets the game flow, bet there aren’t any bookings or aggro.
Bloody hell who’s that on the phone? “Eh up Mick” (the boss). He’ll be in a good mood, the last time I checked my Twitter timeline the Notts County Youth Team were 2-0 up against League leaders Bradford City. It’s a short conversation – we lost 3-2. 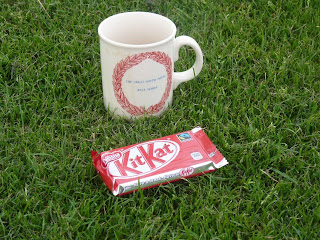 Ruddington look tidy on the counter-attack. Former Leicester City Academy forward Craig McMorran has a deft touch and a sharp footballing brain. Burton Joyce have the malnourished ‘Troy’ up top; he is like a whippet and reminds me of a young Georgie Best. He’s already fluffed a few chances before finally finding the back of the onion bag after a brave block by the Rudd’ ‘keeper.
The visitors are soon back on level terms, thanks to a dozing linesman. The Ruddington forward scampers away when clearly offside. I’ve sent a few tweets about the game and hear someone from across the dugouts shout out my name. I feel embarrassed and trudge off to the Clubhouse for a mug of piping hot tea, accompanied by a Kit Kat for £1.40. I pick up a four page programme that are scattered on a table. I pass comment to the lady behind the tea bar that there are no junior games on this afternoon. She says there was a heavy game schedule earlier this morning.
Those two chaps are still mowing the wicket in tandem. Crikey, they’ve used more petrol than Sebastian Vettel. Ruddington up it gear in the second period. I take a stroll around to their dugout to see if I can discover any one-line gems. Tom Randall is one of the subs. He’s sat on more benches than Rumpole of the Bailey. The ‘Housewives Choice’ is hopeful of a run-out. Any chances of that are dashed on the hour with the Ruddington centre back netting from a set piece. 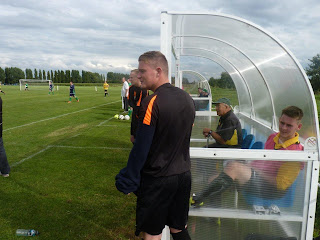 One of the visiting substitutes is former Nottingham Forest striker Adam Newbold. He describes to Tom how he scored on his debut for the Reds against Morecambe in the League Cup at the age of 19 years old. Five years later he’s playing with his mates at grassroot level. He still has the touch, but sadly not the movement anymore.
The game is in its dying embers. The ball falls to Matt Hayes with his back to goal, 20 yards out. He flicks it up and in slow motion both his feet leave the floor, as if he’s walking on the moon. Quick as a flash his right boot catches the ball at head height. His shot arrows into the top corner of the net. It reminds me of Pele’s overhead kick in Escape to Victory – “Come on lads we can win this one.” (Russell Osman). There’s a massive pile on. Hayes emerges unscathed.
Seven years of groundhopping. I’ve seen the likes of Lampard, Drogba and Malouda. But I kid you not, at one of the lowest levels in the Football Pyramid, me and 24 wags, dads and friends have witnessed one of the best goals we will ever see. Viva ‘Non League Day.’


Man of the Match: Craig McMorran