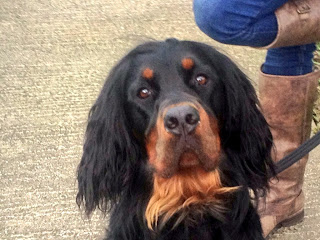 It's Sunday morning and I'm down at my local club, setting up for my first game as manager of the Under 18s. I'll do well to get eleven out today. Last night was the Captain's 18th birthday. It was total and utter carnage. Sky TV were live and exclusive at the Queen's Medical Centre hospital in Nottingham. I watch a couple of potential patients/TV stars drink themselves into oblivion.  They celebrate late into the night at a hostelry behind my house.

Locals report it was like a scene from Malia in Crete, with teenagers spilling out of the bar into the car park and nearby road. I showed my face for a couple of hours, before turning in just before midnight. Sticky junior (my lad) staggered up the wooden hill at 3am.

My record of never having a player booked or dismissed lasts for of all of ten minutes. A lad I should  have never of signed is shown a straight Red on his debut. The visitors behaviour is appalling. One is finally dismissed, when they could have easily been down to eight men. The moron refuses to leave the technical area and causes mayhem at the end of the game. Oh well Sticky, one down, nineteen to go. 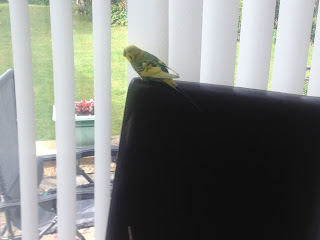 It's Friday evening and I'm scrolling down my Twitter timeline whilst downing a bottle of that bloody Rioja that is on offer again. I notice that former BBC Radio Leicester, Five Live and Sky Sports presenter Ian Payne is plugging the News at Ten on ITV. I drop him a cheeky tweet to say he's had more moves than Robbie Keane. He replies and says he 'kisses the badge of them all.'

There's a busy schedule on Saturday before the trip north to Calderdale. For those first-time (and probably last-time) readers from Brighouse and Crook, I'm Head of Talent ID for Notts County youth. I've been tipped there's a schools tournament at a village close by.

I bolt down a bowl of muesli and leave Murphy the Budgie arguing with himself in the mirror, as Brian Matthews plays the Spencer Davis Group's 1966 smash hit 'Somebody Help Me' on his Sound of the 60s show on Radio 2. 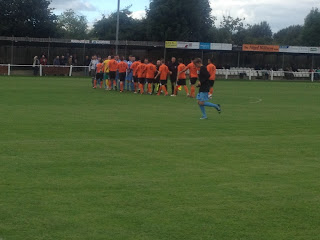 I have a ride around before parking the car on the edge of Ruddington in a deliberate attempt to stretch my legs for some much-needed exercise. As I walk through the gates I spot my Godson playing in a game. He's already signed up for Burton Albion, but still loves a kick-about with his pals. I glance across the pitch and a clock a Nottingham Forest scout with all his clobber on. Those lads love parading about in their kit. I tend not to wear mine, so not to attract attention or distract the kids playing football.

I introduce myself to the organiser of the tournament and produce my ID. I identify a player with potential. His teacher, a Notts County fan, tells me which club he plays for. I will go and watch him next weekend.

I dash home and grab a ham and cheese sandwich. Murphy is hanging upside on a clothes peg, smashing it with his beak in time to M People's 'Moving On Up.' 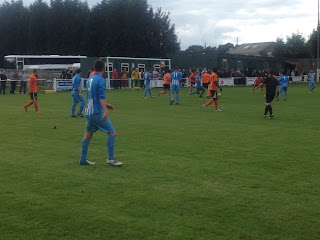 Manchester United have already kicked-off against Crystal Palace as I drive up the Nottingham ring road. The radio commentator had earlier in the week interviewed former Eagles striker Mark Bright. He tells the story of how Bright bagged a brace at Old Trafford back in 1989 in a 2-1 win in front of 33,000 fans. Supporters unfurled a banner after the game; daubed on it was 'three years of excuses, ta-ra Fergie.'

I leave my car at a pub close to the M1 and jump in with Phil, a coach I used to work with at Notts. It's plain sailing up the M1. Jon Moss, the referee, not to be confused with the Culture Club drummer, has refused to give a penalty at Old Trafford.

We turn off at Junction 40. Hopes are dashed of a real ale or two as Saturday shoppers clog up the roads enroute to the soulless retail parks in Dewsbury and Mirfield. The Dual Seal Stadium is tucked away from the town centre. The club are celebrating their 50th anniversary this season. 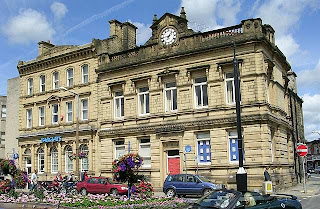 Brighouse is a town in the Metropolitan Borough of Calderdale in West Yorkshire with a population of over 30,000. The town rose to fame in 1977 with the Brighouse and Rastrick Brass Band having a No.2 hit in the Pop Parade with the 'Floral Dance' - not going to mention Terry Wogan's daft version. The area is also home to Britpop band Embrace.

It's £5 on the gate and a further £1 for a programme which is a neat and tidy effort. It's an FA Cup first round qualifying tie. I adore the ground. The only thing that spoils it are the Potakabins behind the nearest goal. It's tree-lined, has hard-standing, wooden fencing and is fully-railed. The pitch has a side-slope, but looks immaculate. A big hat-tip to the groundstaff; you could play bar billiards on it. I walk to the stand on the far side. Dignitaries are sat on white tip up seats. 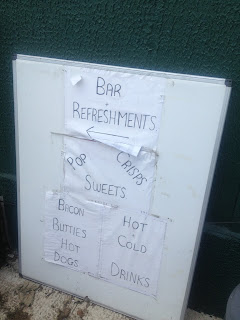 Crook Town are from County Durham. They caused the big upset of the previous round, dumping out Kendall Town from Evostik Division One North on their own patch 4-2. It's what's brought me here, although Brighouse have been on my radar for some time.

Over half of the 161 crowd have travelled down from the north. Brighouse play in a replica Wolves kit, whilst Crook's is like Coventry City's.

It's a breathtaking 45 minutes. The visitors are at sixes and sevens in the early stages. Ernest Boafo hits a rasping shot from the edge of the area to put Brighouse one up. Crook forward Kyle Davis  leads the home defence a merry dance. His movement and touch are mesmeric; if only he'd lift his head and release the ball. He thumps a shot into the roof of the net on the stroke of half time. Brighouse have squandered so many chances. Crook will have been relieved to hear the half-time whistle. 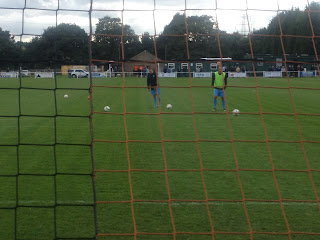 Pie and mushy peas are once again the northern delicacy of choice in these parts. Sticky swigs on a bottle of Becks and chats to a friendly official. I spot a groundhopper slumped in his seat studying his Sudoku puzzle, as I make my way round towards the goal that Crook will attack. Murphy has predicted a 3-1 win for the team from the north east. I have a quick chat with Lucas the dog before the second half commences.

Brighouse blow away the visitors with some high tempo football. Pocket rocket winger Ryan Hall puts them in front on 54 minutes. Tom 'The Hitman' Matthews (46 goals last season) plays a give and go with Boafo, rounds the keeper and taps the ball into net. Crooks misery is complete with 20 minutes to go when Ben Shaw makes it 4-1.

I'm sandwiched between a couple of moaning Minnies from Durham. They unleash their frustration on the young referee. The 4-1 scoreline doesn't tell the whole story; it could have been a wider margin. Now where's that bloody budgie?

Man of the Match: Ryan Hall
Posted by Sticky at 8:09 AM