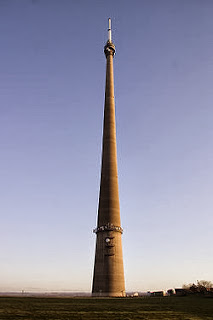 A long drive back from Chorley, was not helped by getting off the M6 a junction too early. There was an awful accident on the opposite carriageway of the A50. It later transpires that 70 people were involved in the pile-up; thankfully no-one was seriously injured.

It's Saturday morning. I wake up from a strange dream. I bagged a pair of jeans at the Next store on the  Riverside Retail Park in Lenton, Nottingham for £347. Mrs P wasn't too chuffed with the bank balance. The most I've ever splashed out on jeans is £30.

A bacon bagel is washed down with a pot of tea for one. Mrs P is in Barcelona for three nights with the girlies. My under 16s have been called off because some of the lads from both teams want to be at The City Ground for the Forest v D***y game. 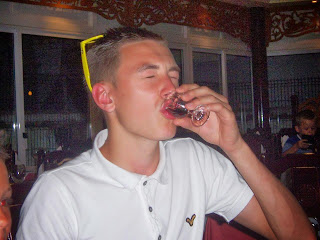 Talking of the Forest game, I can hear someone stomping around the bathroom, grooming his hair with some VO5 wax. Nottingham Forest's No.1 fan, Sticky jnr, flies down the stairs and marches into the kitchen. He's pumped-up readers and looks in the mood to knock someones lights out. He heads to the fridge and threatens to down a can of Carling Black Label in one. "I'll make you a brew son; it'll be stronger than that maid's water.

He's out of the door in a flash and hopping onto a Trent Barton bus to West Bridgford. I give him some dosh to treat himself to a hearty breakfast cob at Mrs Bunns on Musters Road. Murphy, Finley and Groundhopper have a sweepstake on what time the fool will be ejected from the stadium. I plump for 12.13pm (kick off is 12.15pm).

Bloody hell, my phone is going off. It's Sticky junior; he's on the bus, what can he possibly want? "You blithering idiot; you've forgot the tickets." I leave them in the porch for a pal to pick them up. 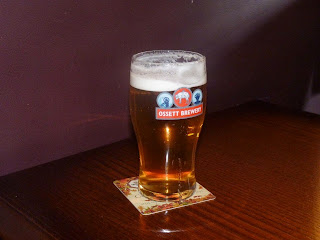 I have to clean out Finley the rabbit and Murphy the budgie. Murphy is in a particularly unpleasant mood. I run him a bath (cold water in one of Mrs P's Pyrex dishes ..... don't tell her.) I put him on my hand and lead him to the water. He's having none of it and sticks his beak into my wrist. "It's not my fault that Norwich have had a bad start to the season, you mardy little sod."

I view a kids football game in inner city Nottingham. I spot a boy immediately and will take a second look in a few weeks time. I've really got my mojo back this season. I head up the back of Bilborough and Nuthall and join the M1 at Junction 26.

'Fighting Talk' on Five Live is hosted by Jonathan Pearce. They're asking for the worst ever managerial decisions. Danny Mills pipes up about Stuart Pearce's time at Man City. With two minutes remaining in a game against Middlesbrough in 2005, he replaced Claudio Reyna with 'keeper Nicky Weaver and shoved David James up front. Beleaguered substitute striker Jonathan Macken watched on from the bench in amazement. 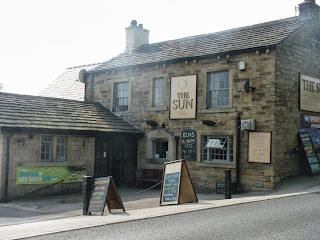 I exit at Junction 38. Tom Tom navigates me onto the Huddersfield Road. Within ten minutes I'm pulling into the car park of the Sun Inn, a gastro pub in the village of Flockton. It's low beamed and has recently been refurbished. A couple of two-seater imitation leather sofas are tucked away in the corner of the bar. I have a pint of 'Silver King' from the Ossett Brewery. The menu is a tad pricey, but I'm 'Hank Marvin.' I order a cheese and pickle baguette with chunky chips and side salad.

Sticky junior has texted in, former Lincoln City defender Jack Hobbs has put the Tricky Trees one to the good. I admire the views of the rolling countryside and the Emley Moor transmitter from the tidy beer garden.

It's a short drive to Emley's Welfare Ground. I can see the ground but can't find the entrance. I'm up and down the same road for ten minutes before spotting a tight turning. I park outside a social club.
I pay £4 on the turnstile and £1.50 for a real gem of a programme. 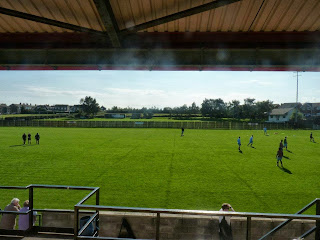 The club has been in turmoil over the last few days. Manager Darren Hepworth was relieved of his duties, only for the committee to re-instate him. The Chairman/Secretary has since resigned from his position(s).

I'd been tipped the ground a while back and it doesn't disappoint. It's three-sided with an open end behind the far goal. A wooden fence runs along the far touchline, beyond this is the cricket ground. There is a covered standing area behind the nearest goal. I take a pew in the Main Stand with its mish mash of purple, yellow and white tip-up seats. It has a playing surface to die for.

A 60s CD is blasting out across the ground. Roy Orbison and The Animals are featured amongst others. There's even the original of 'I Believe' , not a patch on the Robson and Jerome smash hit   .... cough cough. 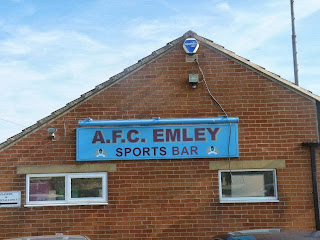 0-0's in this league are like rocking horse manure. Both teams look capable of leaking a few in the early stages. Emley strike three times in a twelve minute spell, midway through the first half, as Borough fold like a deck of cards. Matthew Hall scores a cracker for the visitors, but they find themselves 4-1 down at the break with a second goal for Todd.

I slip into the Clubhouse at the break. It has a maroon 'Emley' embroided carpet. There's a framed West Ham shirt hanging on the wall from their glorious FA Cup run in 1997/98. They dumped my team Lincoln City out of the cup on penalties in a second round replay. Then bowed out to West Ham by only two goals to one. Friendly bar staff serve me up a piping hot cup of tea.

A Sykes penalty puts the game to bed for Emley. The Grimsby Borough forwards never give up though. Hall scores his second of the game. Two goals in the final 2 minutes from man of the match Brighton Mugadza prove to be the final nail in the coffin.

Thanks for coming to see us. Glad we could provide you with an entertaining game.

Appreciate the feedback on the programme too.