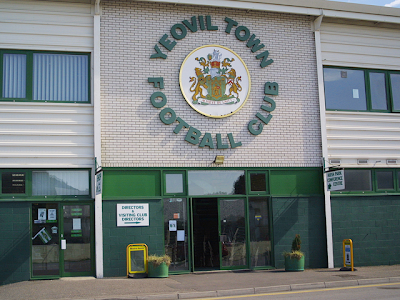 Folk are asking where has he been. It's almost October and so far it's been a no show from the legend. He phones me up on Saturday morning. He's holed up with Mrs Trumpy in a Wetherspoons in Loughborough. The pub is packed to the rafters with Barnsley fans who have stopped off to re-fuel on their way to the King Power Stadium. It's music to my ears. Terrace tickets have been snapped up and a double room booked at the Yeovil Premier Inn: It's League ground No.75 and the chance to spend two days with Trumpy Bolton in Somerset.

It's Tuesday morning and the legend is limping heavily down his driveway. He's scheduled to have a hip operation on 1st November. The trademark blue coat, yellow and blue striped Polo shirt and navy tracksuit bottoms are on show. He slides his hand into a grey bag and lifts out his new Garmin sat nav. His old one has finally bit the dust. "The girl who gives directions has alzheimer's" chuckles a perky Bolton.

A pint of Tanglefoot and three slices of pate on toast have engergised him into an early start. A litre bottle of cider has the top twisted off. His right hand clenches the plastic bottle in a vice-like grip as he guzzles the cider like my car does petrol. Recent booze fuelled holidays have taken place in: Wetherby, York, Cornwall, Kent and Scotland. 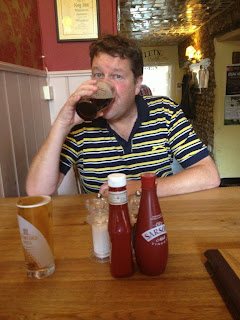 The hip operation means a six week lay-off from work. He frets about how he'll fill his time. I'll treat him to a few magazines from the local newsagents and I don't mean Match Weekly or Shoot, readers. Battle commences on the Ken Bruce 'Pop Master' quiz. Trumpy is out-of-sorts and off form; Sticky Palms struggles too. Trumpy sneers and tuts at a trailer advertising Sarah Cox's Sound of the 80s show. He can't abide her.

We drive at a steady pace down the old Fosse Way. New readers to this blog may need a cold flannel or a glass of water and a sit down when they read about Trumpy Bolton's sole mission in life. He has a crumpled, old dog-eared atlas with each village and town marked-off with a highlight pen where he has had a drink. This obsession has been going on for over 35 years. Today is the opportunity for two more tick-offs for him.

First port of call is the Nog Inn in the horse-racing town of Wincanton. I have a pint of Otter from the Otter Brewery in Honiton, Devon. Trumpy has a cider and real ale. We both have a fish finger sandwich. We're soon pulling into pub number two in the picture postcard market town of Sherbourne in Dorset. I plump for a pint of Badger. A chef emerges from the kitchen and serves up some warm complimentary home-made pork crackling to customers in the bar. 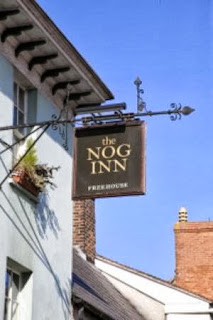 After what seems an eternity we arrive at a characterless Premier Inn adjacent to a retail park. Yeovil is a town in the county of Somerset with a population of 45,000. One of its largest employers is Agusta Westland, who manufacture Westland helicopters.

The Glovers - Yeovil's nickname due to the town once being the centre of glove-making - were founded in 1895. Huish Park (capacity 9565) has been their home since 1990. They are the only Somerset-based club in the Football League. Their previous home, Huish, had a sideline to sideline slope of eight foot. 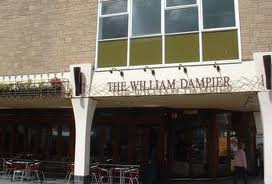 Trumpy necks a swift one in a neighbouring pub to the motel, before we jump into a taxi which has been booked by Brendan off Coach Trip in Reception. The legend engages in conversation with the driver. "Where you from then chap" "Bulgaria eh. Reckon your lads will beat Chelsea tonight." "Er Trumpy, that's Bucharest in Romania pal" whispers an embarrassed Sticky.

The town centre is in desperate need of some tender loving care. It makes Mansfield look like St Tropez. We book another taxi at 7pm, agreeing to meet the driver at the rear door of J D Wetherspoon's William Dampier. It's as cheap as chips in here. Trumpy slips into top gear as we quaff pint after pint of Dorset Knob and Piddle. A darker side of life emerges outside as we wait for the cab. Large groups of intoxicated teenagers stagger in our direction. A young girl collapses on the pavement like a punch-drunk boxer. Our taxi driver arrives just in the nick of time.

This time the guy is Romanian. Trumpy repeats his earlier conversation. We're dropped off outside the ground. Bolton slopes off in search of further liquid refreshment. I stand at the top of the open terrace, absorbing the atmosphere and admiring the huge away following. The PA announcer pumps up the crowd with tunes from The Jam, The Hoosiers and Calvin Harris. T Bolton appears back on the scene, but he's blowing a gasket having had an altercation with one or two suited and booted Yeovil officials. It's a dry house with no public bars for away supporters. 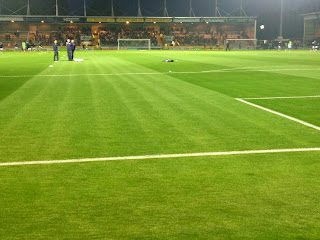 The pace of the game is frightening and is far removed from the non league scene that dominates my life. Leicester's Dyer and Knockaert hare down the flanks. Their million pound strike-force of Nugent and Vardy are lively and exciting to watch. It's not a level playing field, or shouldn't be, as the excellent Gary Johnson wheels and deals in the bargain basement and loan market.

I notice Joe Ralls is playing for the Glovers; he's on loan from Cardiff. My boss and I watched him for Farnborough Town under 18s in the FA Youth Cup a few years ago at Buckingham. It was at the time of Munto and Sven. He played a couple of trial games for the Magpies before Munto Finance were exposed.

The Foxes attack with speed but their shooting is off the radar, Nugent, Vardy and King fail to work the 'keeper. Yeovil come into the game. Former Crewe Alex and Wycombe winger Joel Grant poses problems with his trickery. Only last ditch tackles and some smart stops by Schmeichel prevent Yeovil scoring their first home League goal of the season. 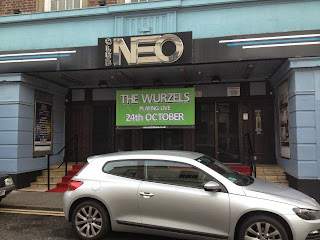 Leicester come out for the second half more fired-up. Lloyd Dyer brings a smile back to a sulking Bolton's face by scoring in the 54th minute, after exchanging passes with Nugent. On the hour it appears that Nugent has put the game to bed by thumping a penalty straight down the middle as Leicester run riot. Dyer misses a sitter after Vardy chases a lost cause.

An exciting ending is set up after a needless challenge by Moore sees substitute Hayter, who holds the record for the fastest-ever League hat-trick, reduce the arrears from the penalty spot. Leicester see out an agonizing last ten minutes as the heavens open on an uncovered Trumpy Bolton. His hair frizzes up like Kevin Keegan's used to at SV Hamburg.

Man of the Match: Lloyd Dyer
Posted by Sticky at 6:06 PM