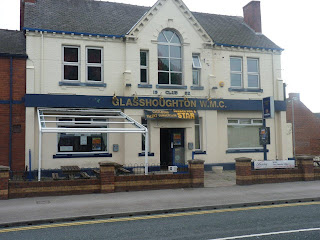 ’m laid out on the sofa, underneath one of Sticky junior’s Nottingham Forest’s duvets and boy am I ill. I’ve brought back some Chupa Chups lollipops for Will and Gangsta from Majorca, for babysitting my budgie, Murphy Palmer and also the Spanish Flu. I’ve got kennel cough, a high temperature and a streaming, runny nose. I can’t stand another episode of Heir Hunters or Homes Under the Hammer. Murphy sits on my pillow, reaching over now and again, to peck away the scabs from my heat rash on my arm.


The fantastic 10 night stay at the Protur Alicia in Cala Bona is a distant memory. I’d hoped to find some Nottingham Forest memorabilia on show, as it’s next to the resort where Clough and Taylor had properties in the 70s and 80s. NFFC players and staff actually learnt of promotion to the old Division One on Cala Millor beach in 1977.
On the final night in the hotel I chance upon a D***y County supporter. He reveals that Peter Taylor actually died in Cala Millor, where I walk to every day. Later on a Facebook a friend tells me there are pictures and mementos of Clough and Taylor in the Sportsmans Bar. Maybe next year I’ll take a look. 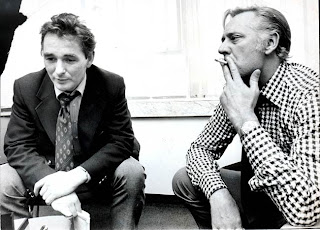 I’m still fuzzy and weak when I awaken from a deep sleep on Saturday morning. I pass a late fitness test for the trip to Castleford. It’s a pot of tea for one and cheese on toast, with a spot of brown sauce. I better get something done as I’ve been sprawled out on the couch for pretty much 48 hours.
Murphy is on his swing, swaying to Abba’s ‘Gimme a Man After Midnight’ – ‘The Skipper’ was dancing to that one on his holidays. I cut the back lawn. Finley, my rabbit, beckons me over to his cage. It’s time for one of his crap non league score predictions: “2-1 to Jarrow, marra”, he whispers into my ear. There’s just time to give both my lads a bollocking (Jack and Joe, not Murphy and Finley) before jumping in the ‘Rolls Royce and heading oop North. 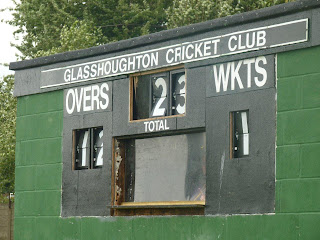 The bloody Nottingham ring road is in chaos once again. It’s a nice steady drive up the M1, M18 and A1.  I messaged Trumpy Bolton, the night before, to see if he fancied a trip out; the legend is currently on the lash in Scotland for a week. He confirms that a hotel booking has been made for October 1st when Yeovil Town entertain Leicester City.

Five Live are eulogising over those Premiership ponces. Jonathan Overend calls it “the most famous league in the world.” Steve Bower and Danny Mills are commentating from Anfield for the opening game against Stoke City. The away fans sing: “We’re Stoke City, and we pass the ball.” It’s a jibe at former manager Tony Pulis. 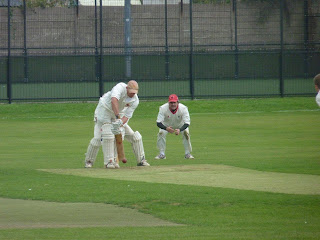 I hit the town of Castleford at just shy of 2pm. It has a population of 37,000 and is home to the Rugby League team Castleford Tigers. The town’s major employers are Allinson’s flour, Burberry clothing and Nestle. Famous folk born or raised in the area include: crime novelist Peter Robinson, the creator of Bill and Ben the Flowerpot men, Hilda Wright, ‘Spend Spend Spend’ Pools winner, Viv Nicholson and former Hull KR stand-off, Roger Milward.
I clock the Glasshoughton Centre to my right. To the left is the Xscape SNO!zone. I park the ‘Rolls’ to the rear of the Glasshoughton Working Men’s Club. They’re advertising a ‘Meat Loaf Tribute Night’ and a ‘Talent Competition.’ Flipping heck, it looks a bit tasty in there; think I’ll give it the swerve and take a stroll down ‘Charlie’s Chippy’. 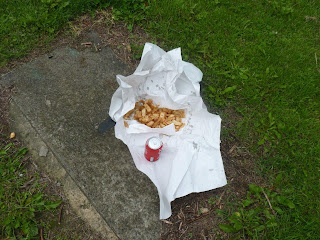 The shop is about to shut. I grab the last portion of chips and batter bits, accompanied by a can of Coke. I’ve had bugger all to eat for the last few days. There’s a sign outside to ‘ring Jean’ if you want to join Slimming World. I might have to after wolfing down that ‘Glasgow Salad.’
As I stroll through the gates on the Leeds Road I notice a cricket match about to re-commence following a short shower. A heavily built lad steams in from the Leeds Road end and raps the pads of the left handed batsman. After a huge pause the umpire raises his left index finger. The disgruntled batsman shakes his head and gives the man in the white coat a disgruntled look, as he trudges back to the pavilion.
I pay £6 on the gate and a further £1 for a programme. To my left behind the nearest goal is a covered stand; on the far side is the main stand with blue tip-up seats. There is further cover behind the far goal, with the Welfare Centre, a brick building, running along the nearest touchline behind the dugouts. 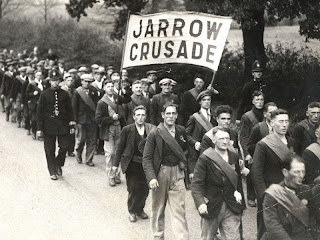 Jarrow is a town in Tyne and Wear with a population of 27,000. It was once famous for shipbuilding and was the starting point of the Jarrow March, a protest at unemployment and shipyard closures in 1936. Notable people from the area include: Steve Cram, Catherine Cookson and Frank Williams. It featured recently in BBC1’s Working Britain, with Paul O’Grady spending time with the locals.
Glasshoughton play in the NCEL Premier Division, whilst their opponents are in the Northern League Division Two. Welfare are sporting a replica QPR blue and white hooped strip. They look much younger than their counterparts, who start sluggishly, following the 100 mile bus journey south.
The home side take the lead on 37 minutes with the unfortunate Kirkup finding his own net. The response is immediate, Kirkup makes amends by nodding a free kick to the back post, the ball is played back into Stu Nicholson who fires into the corner of the net. 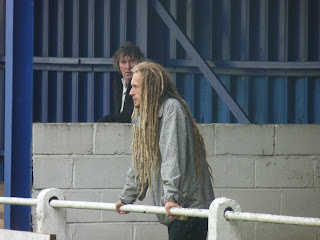 Bloody hell, what’s Swampy doing here?  What a cracking set of dreads he’s sporting. I’d have thought he would have shimmied up a tree by now to get a bird’s eye view.
I have a mosey about the Welfare Centre at the break. The bar is bustling. I grab a coffee and notice replica framed football shirts on the wall. They are gifts from former Glasshoughton players Martin Woolford (Millwall) and ex Grimsby Town winger Nick Hegarty.
I check the half-times. Forest are beating Bolton, whilst Notts County and Walsall are yet to break the deadlock at the Banks’s Stadium. Pat Murphy, the Radio 5 cricket correspondent has replied to a tweet I sent him regarding the form of England prospect Ben Stokes, who has just bowled a hostile spell for England Lions against Australia at Northampton. 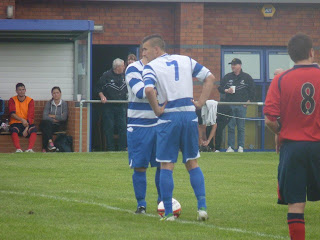 I don’t know what they’ve put in Jarrow’s tea but you could march to London on it. They come out for the second half totally energised. Chances go begging before the game is put to bed with two goals in as many minutes following some Laurel and Hardy defending by Welfare.
Glasshoughton pull a goal back following a cleverly-taken corner to set-up a grandstand finish. The visiting ‘keeper comes for a cross and gets nowhere near it. “You were cleaning windows there ‘keeper”, remarks Sticky. He turns and smiles at me. It captures the spirit the game has been played in. Even a senseless and silly sending off at the death for Jarrow doesn’t ruin the day. A lovely ground, well kept pitch and two good sides. All for £6. I can’t arf pick em!
Man of the Match: Swampy
Attendance: 75
Posted by Sticky at 9:22 AM