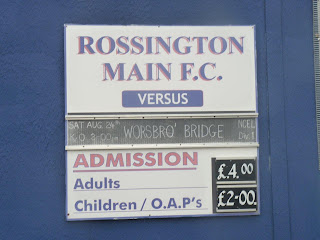 It’s Friday June 7th 2013. I’m cruising down the A453 at 5.30am. I pull off the A50 and turn into Sawley Marina. The Auctioneer appears from his boat at the crack of dawn. Destination is Scarborough in North Yorkshire; or as the locals call it ‘Scarbados.’ We’re off to watch Day 3 of the LVCC match between Yorkshire and Nottinghamshire. The Auctioneer is a staunch supporter of the Tykes.
We’re parked up in the town’s North Bay at just gone 8am. Breakfast is served at a beachside cafe, as we look out into North Sea at the boats bobbing and the sun shining. We head down to the harbour in the South Bay. The Auctioneer is fagged out after a trek up to Scarborough Castle.
It’s £15 on the gate at one of the all-time-great provincial grounds. Seagulls perch on the rooftops of nearby bed and breakfasts, ready to swoop down for any unwanted food. We sink a couple of pints in a back street boozer at lunchtime. Sticky gets sunscreen stuck in his eye and is crying for most of the day. 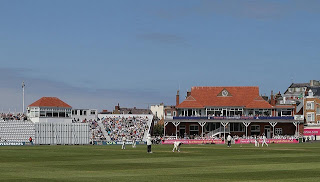 Notts take a pounding in the field. 329 runs are clubbed around the North Marine Road ground for the loss of one wicket. Gale and the impressive Ballance chalk up tons. A fish and chip supper is devoured before the long trip home. We had hoped to make the return match at Trent Bridge yesterday. Another dismal batting performance by Notts scuppered any chance of that.

It’s Saturday morning. Five Live are discussing the Ashes and the shift of balance towards the Australians. The subject of ‘walking’ after hitting a ball crops up again. Former Aussie fast bowler Merv Hughes is quoted as saying: “You never walk, unless you run out of petrol."
I tune into Radio 2 for Murphy Palmer, the budgie. I leave him moonstomping to ‘House of Fun’ by Madness. Finley the rabbit has already predicted a 0-2 away win for the Briggers. He was impressed with a bedtime story from me last season, when I told him how they thumped Pontefract 3-0. 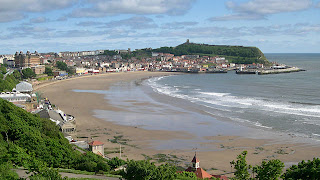 I leave the ‘Rolls’ in one of those Pub and Kitchens on the A610 and hook up with a lad I used to coach with. Radio Nottingham is reporting that a feminist group are demonstrating outside Tesco’s on Long Row in Nottingham. It’s called ‘Lose the Lads Mags’ and is a protest against the selling of Nuts and Zoo magazine. Bloody hell, Sticky jnr is in town and subscribes to both. I hope he doesn’t get wind of the demo and go wading in.
I flick the radio to Five Live. Sticky’s favourite commentator, John Murray, is reporting from Craven Cottage. He’s saying that Arsene Wenger has sprung a surprise by throwing 16 year old German born midfielder Gedion Zelalem, onto the bench. He was spotted playing in the USA for Olney Rovers.
The journey is plain sailing. We come off the M18 at Junction 3 and onto the Bawtry Road, passing the impressive Doncaster Racecourse. A bare-chested skinhead, swigging a can of Heineken, walks by. He’s covered from head to toe in tattoos. 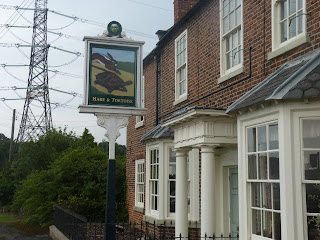 We pull into the Hare and Tortoise, which dates back to the 1700’s, where it is rumoured that Dick Turpin once stopped. I hope he was happier with the service than I am. After an age I’m poured a pint of pale ale from the Leeds Brewery, by a lass with the personality of a plant. They should just call it The Tortoise – the service is that slow.
The bacon on my brie melt is burnt to a cinder. I plonk myself on a bench outside. The Joop half price after shave from East Midlands Airport, that I’ve squirted on, not only attracts the ladies but also wasps. After several unsuccessful swishes with the latest copy of the Doncaster Gazette, I give up the ghost and sit back inside. 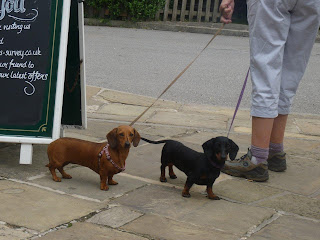 A couple of those pointless Sausage dogs start a pathetic yapping at my feet while they wait for their owners to come back from the toilet. If they don’t belt up soon I’ll be launching them down the A638 with my Adidas Samba’s.  My misery is complete with a punter on an adjacent table constantly rustling a jumbo sized crisp packet whilst noisily munching his way through his snack. He’s the sort of a guy you may have the misfortune to sit next to at the cinema.

An irritated and grumpy Groundhopper makes the short trip down the road to the old pit village of Rossington. The village has a population of just under 15,000. The pit was sunk between 1912 and 1915. It ceased production in 2007.
Sat Nav has had a wobble, but I spot a cricket match in progress. A car load of Teddy boys roll up. I ask a guy who looks like Alvin Stardust if he knows where the ground is. We eventually stumble on Oxford Street – the one in Rossington, not London. 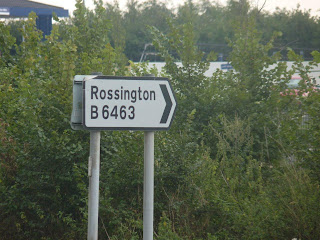 It’s £4 on the gate and £1.50 for a well produced programme. The ground is neat, tidy and blue-painted. I take a position on the far side next to the Gerry Murden Stand. The pitch is like a bowling green.
I caught both these teams last season and was suitably impressed. The visitors begin the game strongly, carving out chances from the off. They take the lead on 8 minutes. An initial shot is blocked but Podmore tucks away the rebound.
The Briggers should be out of sight by now but are wasteful in front of goal. The Blues equalise against the run of play on 36 minutes through a Ben Clark strike. I’m in the tea bar getting a brew, just minutes before half time, when there’s a huge cheer. I pop my head out of the door to see big centre forward Brandon Fallon celebrating a goal. How the hell are the Briggers 2-1 down? 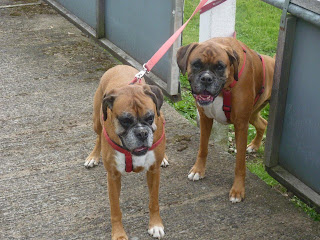 Ooh, I recognise that tune blasting out of the speakers, it’s Duck Sauce’s ‘Barbara Streisand.’ I remember throwing some shapes to that one in Abersoch 2011. I have a chat with Ruby and Millie, two Boxers, who are a bit miffed to have chosen the wrong end where the goals have gone in. Unlucky lads.
The second half is scrappy, has no pattern and has minimal chances. A scruffy goal on 65 minutes levels the game for the Briggers. They finish the game stronger. Fluidity and flowing football is restored. Man of the match Adam Podmore goes down in the area, having turned his marker. The penalty is dispatched with ease.
The Briggers deserve their victory. They have a good spine to the team and play some great football. Hopefully I can catch them again later in the season.
Posted by Sticky at 11:32 AM