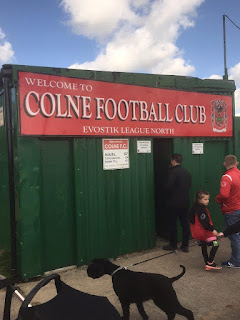 We're staying in the Holiday Inn just outside Royal Leamington Spa, in Warwickshire; it's bloody awful to be honest. We don't give two hoots. After a failed attempt and a Sticky Palms 'red mist moment', we finally jump into a cab and head into town. There's a warm welcome at the Cricketers Arms before being tipped the wink about the White Horse down the road.

A lot of folk are 'sniffing' behind closed doors in the toilets when I waltz in - I thought I was on the Avenue in West Bridgford for a brief moment. Evening dinner is taken in the glorious Good Pub Guide main entry - the Star and Garter, before retiring to bed at 'Fawlty Towers.'The weekend is topped off with a stroll around Charlecote Park, a National Trust owned 16th-century country house on the banks of the River Avon, surrounded by deer. 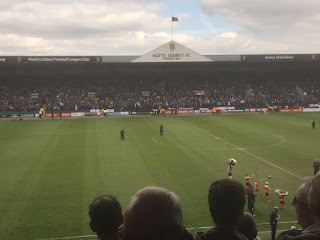 It's Easter Monday and I feel worse for wear after scoffing a Guinness Easter egg and a few glasses of Chateauneuf-du-pape on Sunday evening, both kindly bought as gifts by Ms Moon. I walk off the after effects and head down towards Meadow Lane. Paul Cook's Pompey are in town and in party mood. If results go their way the 5,000 travelling army can celebrate promotion to League One.

The pubs around Trent Bridge and close to the ground are stacked out with folk. I stroll along the banks of the Trent, crossing over the Wilford Suspension Bridge. I notice a kiosk is open, adjacent to the old Town Arms pub, which is soon to re-open as a Brewhouse and Kitchen, with its own microbrewery and 50 craft beers. I buy some fruit pastilles and mints for the match. It might freshen up my pallet and kill off any bad breath that is hanging around. 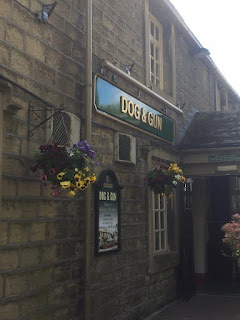 I meet 'The Taxman' outside Notts County's main entrance. I admire all the Pompey fans who have taken the time-out to have photos posing next to the Jimmy Sirrel and Jack Wheeler statue. We take a pew in the Derek Pavis Stand. Portsmouth are different gravy. They pass Notts off the park. Their fans invade the pitch at the final whistle. Notts County owner Alan Hardy shows a touch of class by allowing the players and fans to celebrate together.

I'm loving my football right now, even though it's the fag end of the season. I meet my two boys on Tuesday evening for tea at the Gamston Lock, before sloping off to Regatta Way to watch champions elect West Bridgford FC. There's a classic smash and grab performance from local rivals Radcliffe Olympic, who nick a goal at the death to leave Bread 'n Lard Island FC needing four points from their final two games to lift the East Midlands Counties League title. 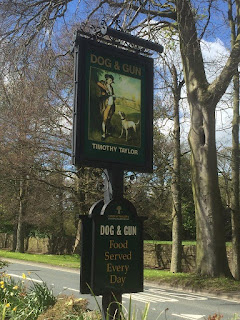 I'm at a works' leaving do at The Embankment for a big Nottingham Forest fan on Friday evening. He watches 'The Lincoln' now and again, so I make a special effort to attend. Four pints is enough for me these days, particularly when it's between 4.5% - 5.5% ABV.

I make the fatal mistake of checking-in with Ms Moon who is on the sauce back at HQ with a mate. "Can you call in at KFC for some supper ?" Bloody hell, I hate that place and the incompetent buffoons that work there. I'm told there's a fifteen-minute wait for chicken on arrival- the red mist descends again.

We're up and out the door at ten bells. It's a bit of a trek up to Colne. Ms Moon is feeling rather chipper that she can flick around with the DAB radio. Frank Skinner has too much rattle on Absolute. I listen to Graham Norton through gritted teeth. Although I do have a 'Dad dancing' moment (despite piloting) to Mai Tai's 1985 hit, 'History.' 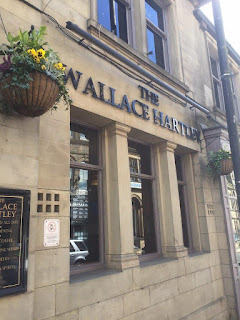 We turn onto the M62 and M606, skirting around the edge of Bradford city centre, before heading up the Keighley Road. The Dog and Gun at Glusburn is as good as it gets. It's my third visit. I have a pint of Mary Jane pale ale from the Ilkley Brewery. The homemade steak and potato pie is a steal at £7.95. Ms Moon mops up fish, chips and mushy peas.

Colne is a town in Lancashire six miles north-east of Burnley, with a population just shy of 20,000. With the Industrial Revolution, cotton manufacturing became the main industry in the town. By 1891 there were over 30 cotton mills in the town. Notable people born or raised in the town include: Wallace Hartley, bandleader on the RMS Titanic, Sir William Pickles Hartley, the jam manufacturer and Natalie Gumede, who played Kirsty Soames in Coronation Street.

It's a beautiful sunny day. We both fall in love with Colne immediately. It has bags of character and history. I'm desperate to see the memorial bust of Wallace Hartley. I ask a lady in the library for directions, she says it's on the other side of town. The Titanic sunk at 11:40pm on April 14th 1912. When all hope was lost, Hartley moved the band onto the deck, with one of their final tunes being the Star Spangled Banner. Over 40,000 people lined the streets of Colne for Hartley's funeral. 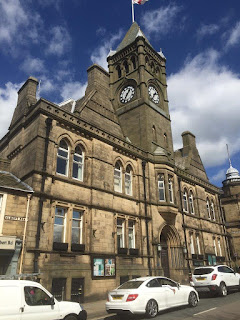 Ms Moon is queuing for coffee in an independent coffee shop as I people-watch a few drunks swaying and shouting outside the Duke of Lancaster on the High Street. I have a tearful moment to myself as I watch Lincoln City run the clock down on 'Live Scores.' Two goals from the twinkle-toed Terry Hawkridge sees the Imps over the finishing line and back in the Football League. I take a stroll down the street. Imran Khan's barber's shop is doing a roaring trade. Blimey, Jemima must have taken him for a few bob if the poor sod has to cut hair. 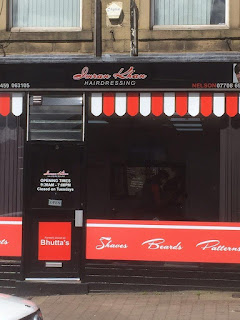 There's a respected groundhopper writing a book called '100 Grounds to Die For', if he's not been here I'll kick myself. I'm gobsmacked with the sweeping views down into the town and up into the hills.

Colne need something from the game to ensure a play-off spot. Droylsden, from Greater Manchester, are playing for pride. I'm mystified by this, as I saw them up in Lancaster before Christmas when they played a beautiful game of football.

Over 500 fans have rolled up to support their community club. Manager, Stephen Cunningham, lives and breathes the Club - it will be a great achievement to finish in the top 5. 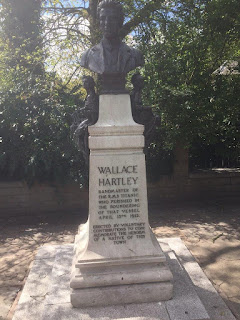 Colne spurn an early chance, Adam Morning fluffs an opportunity with only the 'keeper to beat. The Bloods of Droylsden pick up from when I last saw them up in Lancaster. Their game is uncomplicated. The passing is beautiful and purposeful. It's only in the final third where they fail to produce. 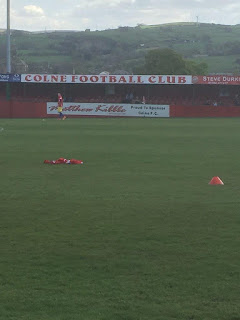 The guy next to me is all tracksuited up. When you scout you should just blend in with the crowd and call people's bluff. I find out in seconds who he's watching. The game's got 0-0 written all over it (again). I don't get Cunningham's tactics as they put 10 men behind the ball. Maybe he knows Trafford are losing, so a play-off spot is secured.

In the second half Colne drop deeper and deeper. Droylsden are always on the ball, but lack creativity. The brilliant Colne fans see their team over the finishing line after a few late scares. Cunningham punches the air with delight. Farsley Celtic, near to Leeds, will be their play-off opponents.

Man of the Match: Wallace Hartley, Bandleader of the Titanic.
Posted by Sticky at 7:52 PM