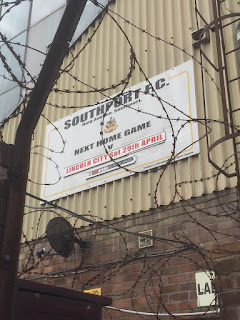 The company I work for has its financial year end on Friday. The heat is on to bring home the bacon. I alleviate a wee bit of pressure on Tuesday evening with a stroll around Rushcliffe Country Park, before making the short journey to the ROKO Health Club in West Bridgford.

The Notts Senior League is at the fag end of the season. Magdala are playing title-chasing Clifton All Whites. Some would say the highlight of the game is a 25-yard free kick dispatched into the top corner by mercurial striker Ben Clark. I preferred a failed scorpion kick attempt by a spectator, who was trying to tap an alehouse clearance back into play. The match ball finds its way through a small hole in the fence, leaving a scurrying, red-faced supporter chasing the ball through the car park before it ends up in rush hour traffic on Wilford Lane.

It's 6 pm on Friday evening, I'm finally shutting down my laptop for the weekend. I've landed a couple of big orders at the close of play. I breathe a huge sigh of relief.  I'm so exhausted that I haven't the energy for my usual start of the weekend stroll and early doors activity at the Trent Bridge Inn or King Billy in Sneinton. 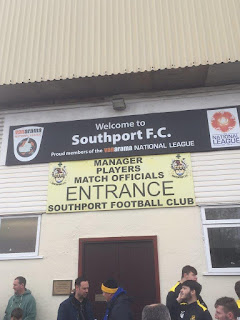 Ms Moon is excited on Friday evening. She has been monitoring the fluctuating prices of hotels in the docks area of Liverpool on Booking.com. She pounces upon a two night deal in the Malmaison boutique hotel on Princes Dock, including breakfast.

It's not even 8 am on Saturday and I'm already parking up at Costa Coffee on Daleside Road. Ms Moon is not at her best on early starts. I'm hoping a large skinny latte can keep her calm. Dermot O'Leary bangs out some decent tunes as we head up the M6 north. I grimace my way through the nauseating Graham Norton and that daft agony aunt he has on each week. 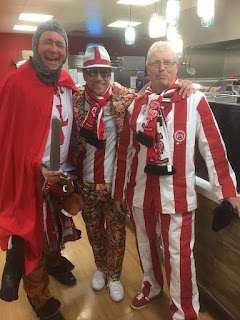 We drive painstakingly through four junctions of 50 mph speed restrictions before jumping onto the M58. We're pulling teeth again in Ormskirk, as the town is gridlocked with traffic. A stressed out Sticky Palms pulls into some godforsaken retail park on the outskirts of Southport. A full English breakfast restores inner calm in Tesco. One or two Lincoln fans are knocking about and in the party mood.

We head up to Haig Avenue, home of Southport FC. The Sandgrounders were founded in 1881 and are currently managed by former Stockport County and Blackpool striker Andy Preece. Both Mark Wright and Peter Davenport have previously managed the club. 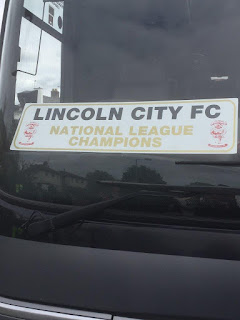 Southport is a large seaside town in Merseyside, with a population of 90,000. Its attractions include Lord Street, a tree-lined boulevard in the town centre, once the home of Napoleon III of France. The town is at the centre of the English Golf Coast, with nearby Royal Birkdale Golf Club hosting the 2017 British Open Championship. On the 9th December 1886 the worst lifeboat disaster in England occurred off the Southport coast. A cargo ship on its way to South America got in difficulty in storm-force winds. Twenty-eight lifeboat crew lost their lives that night. 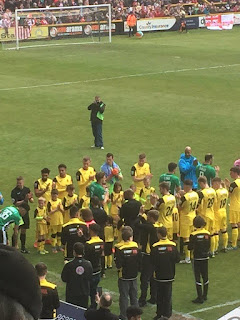 The Southport DJ has put some thought into their set. The Stone Roses and Joy Division are the pick of the bunch. A lady PA announcer sportingly congratulates the Imps on their title win and plays 'Sweet Caroline' by Neil Diamond. Southport show some class by forming a guard of honour for the Lincoln players and staff.

Over two and a half thousand visiting supporters have made the 300-mile round trip. Manager Danny Cowley has made wholesale changes of late. Only four regulars start. Sticky's favourite, Terry Hawkridge, is playing in the unfamiliar position of left back. 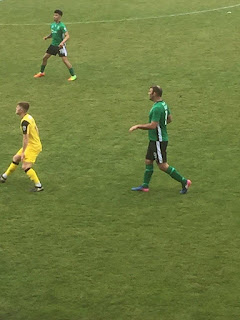 City soon get a grip on the game. They open the scoring through Peterborough United on loan striker Lee Angol after unselfish work by the impressive Jack Muldoon. Big Lincoln striker Matt Rhead is proper showboating. His touch is deft and outrageous. His headers and chest-downs are played into a colleagues path. He sees an effort come off the woodwork.

Lincoln are trying to run the clock down and are playing with ten men, due to an Angol injury, after already subbing three players in a triple change. Southport are awarded a free kick out on the far right touchline. Neil Ashton pings in a ball which hangs in the wind, it sails over the Lincoln 'keeper who is 'cleaning windows' to give Southport a share of the spoils and deny the Imps a 100 points total. Danny and Nicky Cowley will be cross. 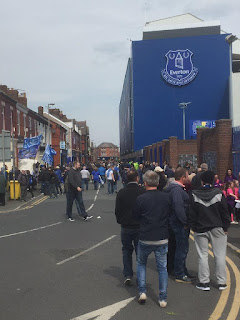 There's a bit of a commotion outside the ground. Traffic has come to a standstill. A rather uncouth and rotund Southport supporter is shouting out that he'll 'stab you all' to the Lincoln City supporters. We watch on with amusement as the local plod try to restrain the blithering idiot.

We finally rock up at the Malmaison in Liverpool after a tortuous drive and a Ms Moon hissy-fit with the new sat nav. The evening is spent in the real ale region of town. I tick off a few good pub guide entries before a revisit to the delightful Liverpool Philharmonic Rooms - a beautifully preserved Victorian pub on Hope Street. We return to the Malmaison; Sticky is particularly worse for wear. 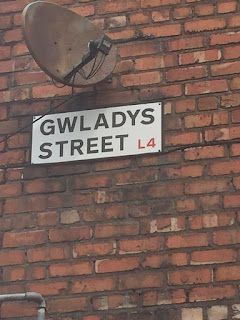 I'm still hanging on Sunday morning, as we walk down the docks and into a much-needed breeze that'll hopefully blow away the cobwebs. We jump on a tour bus and enjoy the guides one-line gags before alighting at Queens Square and heading up to Goodison Park on the No.19 bus.

The place is already bustling with folk despite it being still 90 minutes before kick off. I love the preamble and build up before a game, but often fret about collecting tickets. I managed to bag two tickets for £39 each on the StubHub, so I'm pretty chuffed with myself. Ms Moon loves a big game. 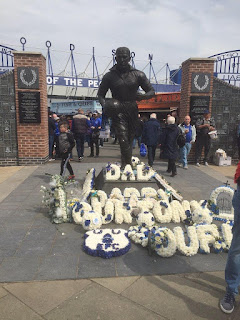 I clock a foreign supporter sporting one of those awful half and half scarves, posing in front of the Dixie Dean memorial statue. I feel the red mist descend. I would have said something, but the bloke looks as hard as nails and would have probably sparked me out.

We take our seats up in the heavens on the second to back row. The view of the ground is stunning. I first came here in 1986 with Nottingham Forest. Dave Watson scored two for the Toffees that day on his debut. An ashen-faced Ms Moon returns from the refreshment bar having just parted with £5 for a bottle of water and a bag of Starburst - Opal Fruits in old money. Welcome to the Premier League, 'Princess.' 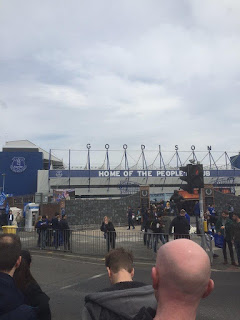 The teams trot out to the Z Cars theme tune. It's a relief once all the pomp and ceremony is over and the game finally kicks off. Everton are unfortunate to see an effort come back off the woodwork in the first minute. Chelsea start to get a stranglehold on the game. Diego Costa is rinsing the two Everton central defenders. He turns them inside out and is a joy to watch, including his theatrics and childish behaviour when decisions don't go his way.

Chelsea up the gears in the second half and score a wonderful goal through the Tenerife-born Pedro. Cahill scores a second before Willian kills off any chance of a comeback. Everton are without pace. One or two regulars are injured, but the highly rated Lukaku and Bartley flatter to deceive, with the crowd getting on their backs. Only Tom Davies rises above the mediocrity.

Man of the Match: Jack Muldoon

Another good read will miss you son

It's Barkley, not Bartley.