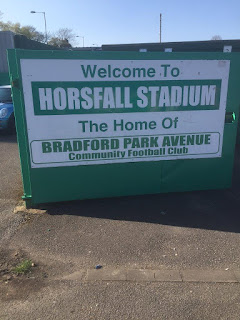 We exit the Software Europe Stand at Lincoln City's Sincil Bank. The Imps have secured a 1-0 victory versus Bromley FC. I've not enjoyed the game one iota. It's a scruffy, nervous and tired performance. The city's Steep Hill is negotiated with the minimum of fuss. Ms Moon has completed the course for the third occasion - it's a walk in the park when you've kicked the ciggies into touch.

I spot an elderly couple gripping a rail, and gasping for air. I offer to lug their belongings up to a nearby hotel where they are spending the night. We finally dive into the Magna Carta at the top of the hill for a well-earned beverage or two, before jumping on the choo-choo back to Nottingham. Prosecco and local ales are polished off at the Crafty Crow opposite Nottingham Castle.

Sunday is Doomsday. It has slipped my mind that I'd promised Ms Moon a shopping spree up at McArthurGlenn off Junction 28 on the M1. We wolf down a first class breakfast on Mapperley Top, at Copper Cafe, before the daunting trip up to Mansfield. I can't get out the joint quick enough. I tick-off Jeff Banks and Calvin Klein. Ms Moon is beaming from ear to ear after a successful shop. 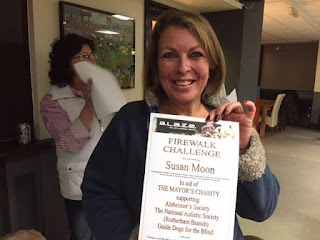 It's the week from hell on the road as a client relationship manager. There are fleeting visits to Southampton, Gosport, Salisbury and Hereford before returning home for the weekend. I receive a text from 'The Zuffler' that reads 'RIP legendary DJ Brian Matthew.' Regular readers will know that Sticky and Murphy the budgie loved listening to 'Uncle Brian' on his 60s show on a Saturday morning on Radio 2. It turns out to be a massive faux pas by the BBC. Brian Matthew remains critically ill in hospital. He hasn't died, despite his employer reporting he has.

I hear the hooting and tooting of a car horn outside the house. My mate Lee is sat in a magnum grey Ford Mondeo Titanium. It's Sticky's new wheels. I cruise up the M1 North on Friday evening, before turning off at Junction 33. Sat Nav guides me in to Rotherham Titans Rugby Club.

Ms Moon is walking over hot coals, at a temperature of over 1200 degrees Fahrenheit, for charity. I need to cool down myself first, so sink a pint of real ale in the plush clubhouse. A pumped-up 'Princess' emerges from the changing room after a 'Neil Warnock' type team-talk. Her name is shouted out in a WWE style. The good lady keeps her nerve, gracefully negotiating the glowing coals. A couple of Strongbow ciders are necked, accompanied with pie, chips 'n mushy peas, before retiring for a few more sociable ones at the Ibis in Rotherham. 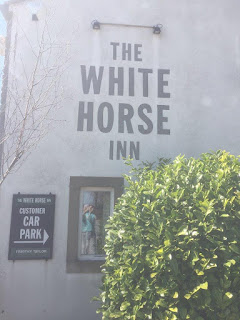 We check-out the hotel before a McDonald's breakfast on a soulless retail park. It's full of greasy old hairy bikers. There's an emotional goodbye in the Ibis car park, reminiscent of Scarlett and Rhett in Gone With The Wind - I'll be back in time for Ant 'n Dec's Saturday Takeaway, unfortunately.

I'm picking up 'The Skipper' from Leeds Beckett University; that's if the lazy so and so is out of his pit. It's great to be reunited with DAB radio (and my youngest son). Colin Murray is on flames as he hosts the award-winning 'Fighting Talk' on Five Live. They mention about the best final farewells in sport. Take a look at Kevin Keegan's at St James' Park on You Tube, it's amazing. He shakes hands with a 13-year-old Alan Shearer before being whisked away in a helicopter to pastures new. 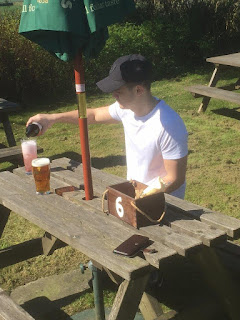 'The Skipper lives next door to the 'Emmerdale Experience.' It's a bit too early to sup an ale poured by Amos Brearley or Mr Wilks. We head out towards the Pennines above Bradford. I've picked out a pub in the village of Thornton, with its stone built houses. The Bronte sisters were born here at 74 Market Street.

We're welcomed by a cheery landlord. I have a pint of Timothy Taylor's pale ale, while Joe has a bottle of fruit cider. Lunch is taken in a sun-drenched beer garden, as we enjoy the sweeping views of the landscape. 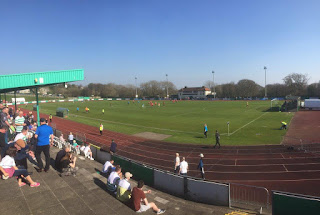 Bradford Park Avenue's Horsfall Stadium is a 20-minute drive away. Friendly stewards direct us to the Park Road car park on the far side of the ground. On entry I bag a programme, buy some raffle tickets and donate to the Salvation Army. 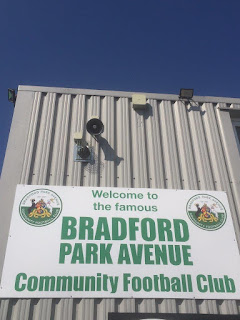 Bradford Park Avenue was founded in 1907. In 1970 they were replaced in the Football League by Cambridge United. The club went into liquidation in 1974 with debts of £57,000.

There's nothing on the game and I fear a 0-0 - I've not seen one at a new ground since North Allerton in September. We walk a full circuit of the ground. One or two folk on groundhopping sites have a moan 'n groan about the athletics track that sits on the perimeter of the community stadium. This is compensated by the panoramic views of the countryside,  rewarded by the climb of concrete steps on the far side of the ground. The DJ is playing a set from his indy iTunes faves - not published on twitter. 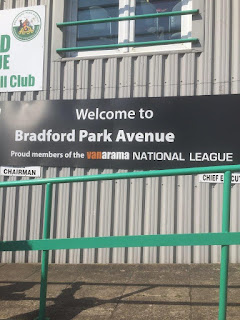 Both teams are safe from relegation. If they don't put a shift in, it's got 0-0 written all over it. FC United appear to have packed up their buckets, spades and sunhats for their end of season jollies. The first half is lacklustre, to say the least. We bask in the sunshine with the FC United faithful.

It has a proper end of season feel about it, with FC barely breaking sweat. People-watching is the winner in the first half. One or two from FC (supporters) have been on the sauce. There's the stench of spliffs wafting about in the air. Some guy next to us, so bored with what is being served up, is threatening to do roly-polies on the steep grass bank behind the goal at half-time - it would blow the DJ's set to smithereens. 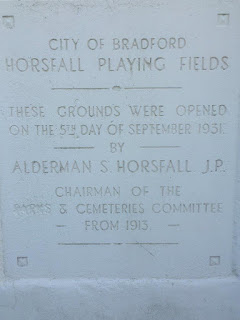 The second half picks up a bit. We've moved down the other end, away from a foul-mouthed FC fan. BPA look the more likely to score, despite FC United fluffing an early chance. We witness the BPA No.15 get between the 'keeper and defender and from 6 yards, with a gaping goal, he tries to walk the ball into an empty net. He's caught dilly-dallying by a last-ditch tackle.

Neither side have the energy, effort or ability to carve out a decent chance. We troop back to the car, despondent, on the far side of the ground to catch up on the scores on Five Live.