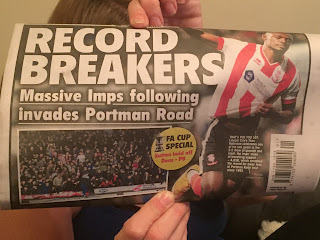 It's Monday evening on December 5th and I'm holed up in a hotel bar in Warrington supping a pint of San Miguel. We crowd around my work colleague's iPad for the FA Cup 3rd Round draw. I'm a bundle of nerves. The balls are emptied from the famous purple velvet bag. Ipswich Town are first out of the hat - I wouldn't mind a day out there, it would be League ground No.80 for me. I nearly fall off my bar stool as Lincoln or Oldham are shouted out next.

Later in the evening I'm constantly checking 'Live Scores' at the dinner table, as Lincoln storm into a three-goal lead in a pea-souper of a fog at Sincil Bank. There's a late rally from the Latics as they claw back a couple of consolation goals. It's all in vain - Portman Road here we come.

Fast forward the clock to Christmas Day morning. Ms Moon hands me over a white envelope. I'm nearly in bits when I pull out a ticket for the 'Big One' in Ipswich. I give her a big hug and race down the stairs to share the news with Murphy my yellow and green budgie - he doesn't care too much for the 'Tractor Boys' - he's a Norwich fan. 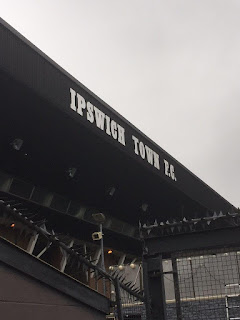 I can't sleep the night before the game. Even though I'm 52 years old, I'm just too excited and anxious about the match. I down a coffee and have a couple of slices of toasted fruit loaf, in the morning, before leaving Ms Moon curled up on the sofa watching another gripping episode of Heartbeat on ITV Encore -  Claude Greengrass has been nicked again for selling-on stolen goods. Blaketon's going to throw the book at him. Murphy asks who will look after Alfred the mongrel ?

I fill up with petrol on Meadow Lane, close to Notts County's ground. Tim Rice is still sitting in for Brian Matthew on Radio 2 - we hope Brian gets better soon as he doesn't half knock out some belting tunes. 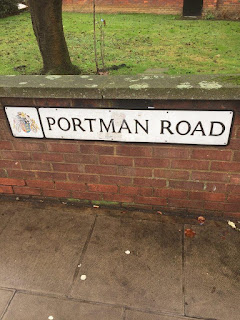 I jump on the A1 at Grantham and head south towards the A14. There's a procession of cars with red and white scarves hanging out of the back windows, fluttering in the wind. Graham Norton is getting on my wick. I slip on Tom O'Dell's latest CD. Tom and I are singing so loud that 'we' manage to miss the junction 54 exit on the A14. I'm soon parked up a stone's throw away from Portman Road.

For the record, I was born in Lincoln in 1964. My father was a journalist for the Daily Mirror which is the reason why we moved to Nottingham in 1969 as he was appointed East Midlands correspondent. My Dad was a massive Imps fan, so we kept going back to Sincil Bank, witnessing at first hand the two great teams built by Graham Taylor and Colin Murphy - who I named my budgie after.

I've been to hundreds and hundreds of Imps games including some big ones like Fulham away in 1982 when we were so close to being promoted to what is now the Championship and the sell out to Wycombe in 1988 when we returned to the Football League courtesy of two Phil Brown goals. 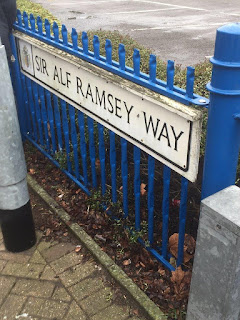 My father passed away in 2000 - it knocked me for six, as it was sudden and unexpected. Sincil Bank without him seemed a very lonely place for me. I went to the Millennium Stadium for the 2003 play-off final versus Bournemouth and have taken in the odd fixture or two in the last few seasons, but I've put my heart and soul firmly into groundhopping.

I love Notts County and Nottingham Forest and have enjoyed some great away days with my mates, but Lincoln are my team. I still experience butterflies before hearing their score on 'Sports Report' when driving home from a game on Saturdays. 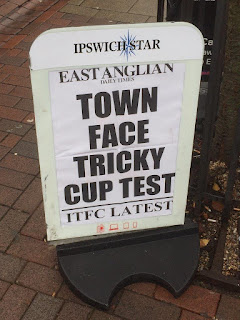 Coaches and cars are to filling up the car park as the 'Impvasion' begins to take shape. A frantic phone call to back home confirms I've left my debit card at the petrol station. I've only a £1 coin in loose change, which will only get me an hour's parking.

I wander around a fairly unremarkable town centre. I need five £1 pound coins for parking or I'm up the shoot. I clock a local newspaper billboard headline - it suggests Ipswich are under pressure and not relishing this cup tie. Ladbrokes share this feeling too, with the Imps a stingy 9/2 to win.

I dash into Poundland and grab a four pack of fruit pastilles. I hand over a £10 note to a bemused lass on the till who isn't too chuffed when I ask for nine £1 coins in return - "well you are called Poundland, love, so you should have plenty." 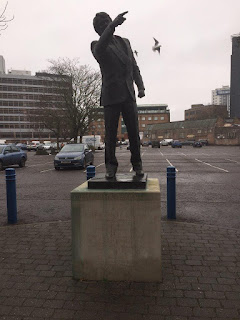 I'm as nervous as hell and there's still two hours to go before kick-off. Plenty of Lincoln fans are milling around the back of the Patrick Cobbold Stand. I best not go for my usual pint of real ale as I'll be up and down to the loo all game, with my nervous system in overdrive. I take a few snaps of the Sir Alf Ramsey and Sir Bobby Robson statues, before entering the turnstile at 2pm.

Ipswich is the county town of Suffolk, with a population of over 130,000, which is located on the estuary of the River Orwell. It is well known for its Tolly Cobbold Brewery (now Ridley's) as well as farming and agriculture. Eighty people were killed during bombings in the Second World War. Notable people born in Ipswich include: Cardinal Thomas Wolsey, Play School presenter Brian Cant, film director Trevor Nunn, actor Ralph Fiennes and footballer Kieron Dyer. 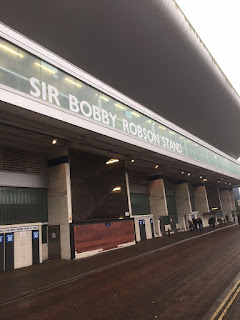 Ipswich Town were formed in 1878 and are managed by an under-pressure Mick McCarthy, whose direct style of play won't go down well with a club famous for the attractive way it plays the beautiful game. Sir Alf and Sir Bobby would be turning in their graves if they saw today's playing surface - it looks bloody awful.

Lincoln have sold out of their 5,000 ticket allocation. They top the Conference, marshalled superbly by sought after manager Danny Cowley, who miraculously led part-time Braintree Town to the play-offs last season on a shoestring budget. 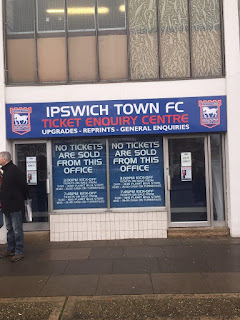 The noise is deafening as the teams emerge from the tunnel. Ipswich have a few injuries, whilst the Imps are pretty much at full strength. I live in hope more than expectation. I just want the lads to put in a performance and not take a drubbing - a goal would be an added bonus.

My stomach is churning and my spine tingling as referee Lee Probert blows his whistle to start the game. The Imps look unsettled for the first five minutes. One or two players appear to have selected the wrong studs - particularly full back Bradley Wood - who seems to spend more time on his backside, due to the slippery surface. 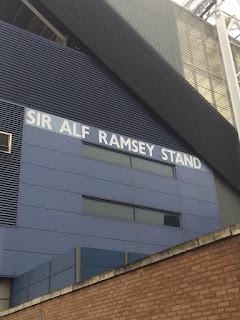 In City's first attack Matt Rhead flicks a header onto Theo Robinson who plays a ball out to the wing, Nathan Arnold takes a touch before delivering the perfect cross for Robinson to sweep the ball home. I'm hugging and grabbing folk I've never met in my life. There's barely time to draw breath when Tom Lawrence equalises after a long mazy run. His shot seems to go under the body of a floundering Imps' 'keeper Farman.

City aren't rocked one bit. Back they come again and again. Terry Hawkridge is outstanding. I used to watch him play for a pub side in Notts a few years ago. I'm not saying he was small then, but he used to do his paper round before the game. He snaps and snarls in the tackle as well as harrying and hustling the opposition. His passes are slide rule and purposeful.

It's 1-1 at the break but we've looked hungrier and played the better football than a lacklustre and shell-shocked Ipswich. In the second half City are magnificent. They cut the 'Tractor Boys' to ribbons and pass them off the park. Both Robinson and Arnold go close before a miscued header finds Robinson in acres of space. He calmly lifts the ball over an advancing 'keeper to send the visiting support into raptures. 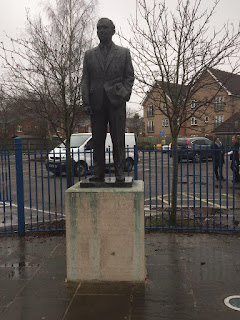 I begin to hyperventilate. I seriously think I'm going to have a heart attack. Having hugged and kissed a few more people I find myself six rows further down the aisle following the celebrations. We're all doing the 'Dam Busters' simulation chant now - I'm preparing to land at RAF Scampton. The youth next to me says that he'll settle for a draw now. I agree; we're not the luckiest of teams, never have been. My phone is going off constantly with folk willing the Imps over the finishing line.

The bloke behind me is panicking whether he should cash out of an accumulator bet that includes the Imps when the inevitable happens. A desperately tired Matt Rhead is caught dwelling on the ball, a deflected daisy-cutter of a shot from Leicester loanee Tom Lawrence somehow beats the outstretched arm of Paul Farman before nestling in the bottom corner of the net.

It's a sickening blow as we have pretty much controlled the game. I'd have taken a draw at the start. Raggett and Waterfall have performed heroically at the heart of the City defence. What a game of football we have witnessed. My Dad would have loved it.

Man of the Match: Sean Raggett
Posted by Sticky at 6:51 PM