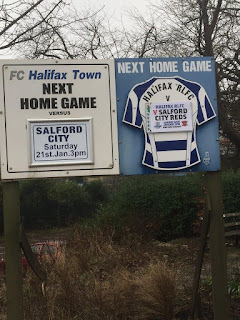 It's 4:50pm on Saturday 7th January. I'm stood up, arms aloft, at Ipswich Town's Portman Road, clapping furiously along with 5,000 Lincoln City fans. We've seen a pulsating FA Cup tie that has finished all square at 2-2. The Imps were minutes away from causing the shock of the round, but couldn't quite get over the finishing line. We've footballed 'the Tractor Boys' off the park. I do a little jig to Sports Report on Five Live. Lincoln are in the 4th round draw for the first time in 40 years.

My mood is still buoyant on Sunday morning. I'm buzzing. I wine and dine Ms Moon at the Staunton Arms out in the Vale of Belvoir. We bump into White Van Man, who is on full power as he ploughs his way through a sea of Yorkshire puddings piled up high on his plate. He's been sunning himself in Tenerife, where we're due to go in a few weeks' time.

Me 'n Murphy the budgie huddle around the laptop waiting patiently for the FA Cup draw on Monday evening, whilst Ms Moon watches Amos Brearly change a barrel of Watney's in the cellar at the Woolpack Inn. Murphy asks me if I can get him a ticket for Sincil Bank if Lincoln pull Norwich out of the hat - "sorry son, you'll have to use the floodlight pylons as a perch, and we won't be talking all week before the game either." Murphy needn't fret, Brighton at home it is, providing we win the replay. 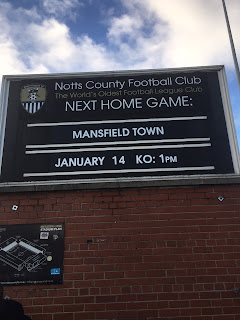 12th January is a sad day as Paul Hawksbee announces on his show the passing of Graham Taylor, Lincoln's greatest ever manager. It's the reason why I love football, because of the team he built with buttons in 1975. What a send-off we'll give him at Sincil Bank next Tuesday.

We're due up at Thackley FC in Bradford on Jan 14th to watch NCEL leaders Cleethorpes Town. The game is frozen off. I'm very kindly invited for a second viewing of Notts County. There's a new sheriff in town; his name is Alan Hardy. He became the owner earlier in the week following some last minute takeover hitches. There's a feel-good factor about the place and a buzz in the air as I take my seat to watch a local derby versus Mansfield Town. Over 11,000 rock up at 'the Lane' and see a battling display from the Pies. It stops the rot of a club record ten consecutive defeats. It will feel like a win. 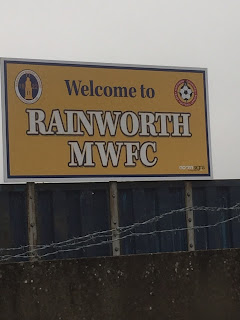 Ms Moon meets me outside the black wrought iron gates at the Meadow Lane main entrance, before whisking me up to York for the evening. I down a real ale in the Blue Bell on Fossgate. We enjoy evening dinner with my brother and sister-in-law at the delightful Italian restaurant Il Paridiso Del Cibo da Paolo, which comes highly recommended.

It's Tuesday afternoon and I've taken the afternoon off work. I drive up to Rainworth, a village in north Notts, where the murderer Donald Nielsen aka the Black Panther was overpowered by a group of coal miners outside the local chippy after taking two policemen hostage, having just robbed a post office in 1975. 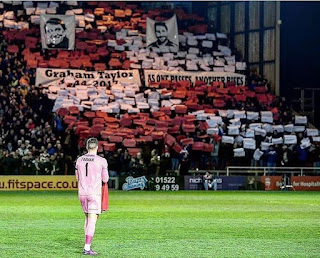 It's flipping freezing up here as I watch Mansfield Town and Notts County Under 23s play in a Central League cup fixture. The Stags beat the Pies 2-1. I blast out the car heating as I hurtle down the A46 towards Lincoln. It's the club's biggest game in 40 years.

I park up near to my dear, late Nana's house, before heading up the High Street into town. I guzzle down a pint of Samuel Smiths at £1.90 a pint in the Widow Cullens Well, at the top of Steep Hill. I thaw out in front of a roaring log fire before making the reverse journey. It's an Al Fresco chippy tea before collecting my ticket and taking my seat behind the goal opposite the Stacey West Stand - named after two supporters who tragically lost their lives in the 'Bradford Fire Disaster' in 1985. 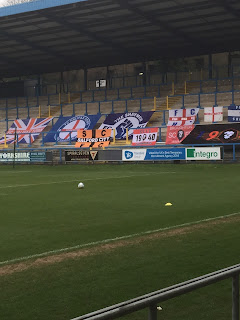 Lincoln are superb again, despite Ipswich bringing in their big guns such as: Luke Chambers, Cole Skuse, Jonathan Douglas and Leon Best. The ending is incredible. On the counterattack, substitute Adam Marriott plays the ball through the eye of a needle to Nathan Arnold who rounds the keeper before slotting the ball home into an empty net. I apologise to a steward for hugging and kissing him - how was I suppose to know he supported Manchester United.

It's Saturday morning. Ms Moon and I are due a decent day out oop North. Halifax v Salford is the game of the day in the National League North. Sat Nav predictably takes us off the M1 and onto the A616, bypassing the Pennine town of Stocksbridge, where not only Jamie Vardy once plied his trade, but also Brentford's Scott Hogan, who is rumoured to be the subject of a £10 million bid from West Ham United. 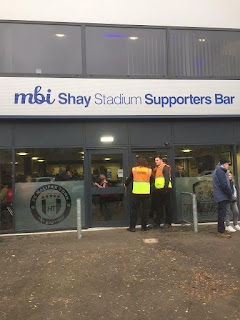 There's the chance of a Good Pub Guide tick-off up at the Old Bridge in Ripponden. We walk over the medieval packhorse bridge, which the River Ryburn flows under. The pub has thick stone walls and antique oak tables. I have a pint of Riwaka from Roosters Brewery up in Knaresborough. We both choose homemade vegetable soup and a beef sandwich. It takes an age to arrive - Sticky P ain't a happy bunny. I settle up the bill, without a tip.

The Shay is only 15 minutes away. We park in a leisure centre and wander down Hunger Hill towards the ground. It's £16 each on the gate and £3 for an excellent programme, which is full of content. Halifax is a minster town in the Metropolitan Borough of Calderdale in West Yorkshire. It has a population of over 80,000 and is well known for its Mackintosh's chocolate and toffee products including Rolo and Quality Street. Eureka! The National Children's Museum, was opened by Prince Charles in 1992. The Halifax Building Society was also founded in the town. 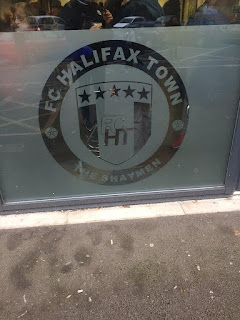 FC Halifax Town was founded in 2008. They replaced Halifax Town AFC who went into administration. The oldest player to represent the club is former Tricky Tree striker Nigel Jemson who was aged 39. Striker Lee Gregory - who I often eulogise about on here from his Staveley Miners' Welfare days - holds the record for League goals for The Shaymen. He left the club for Millwall in 2014 for £250,000. 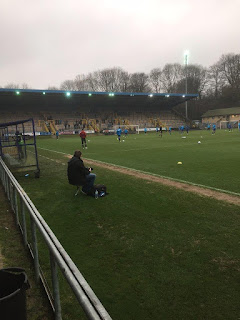 Calderdale Borough Council have proper spruced the place up, since my last visit with blog legend Trumpy Bolton back in the 80s, when a Terry McPhillips goal was enough to see off the Minstermen of York.

Compo, Cleggy and Foggy from Last of the Summer Wine are sat in the row behind us. They are Calderdale and West Yorkshire's moaning champions. The referee is told to 'get your hair from out of your eyes', after a blatant free kick is missed (the ref is as bald as a coot)

It's a lively start by both teams, but it's the visitors who begin to get a stranglehold on the game. They're 2-0 up at the break and coasting. Ms Moon has fetched some coffee that can only be described as dirty dishwater. Come on FC Halifax, you're a great club, but sort the coffee out - nobody drinks Mellow Birds these days .... lol. 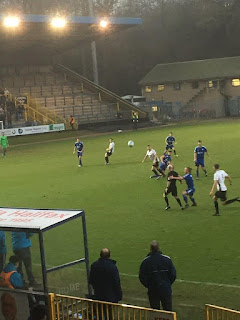 I clock Salford midfielder Scott Burton in the concourse. We often enjoy some banter on twitter.  I wander across to introduce myself. The UK's best blogger, Uwdi Krugg from Where's the Tea Hut, used to wax lyrical about Scott when he was playing for Runcorn Town. I've watched him many times since and I'm totally miffed why nobody in the professional game hasn't taken a punt on him. He can put a tackle in - 10 yellows this season proves that - it's the reason why he is suspended for today's game.

I get gassing to Compo and the lads. I remark it's next goal the winner. They're still roaring with laughter when the Shaymen restore parity with two goals in two minutes, the second goal is worth the gate money alone.

On-loan Halifax striker Daniel Nti is running the show. I saw him at Loughborough University a few years ago. York City's Gary Mills has farmed him out to the Shaymen for a month.The diminutive Matty Kosylo makes it 3-2 from the spot, before former Liverpool Academy striker Adam Morgan puts the game to bed with a smart finish.

Salford joint-managers Anthony Johnson and Bernard Morley will be seething with a crazy 20-minute spell. I wouldn't mind being a fly on the wall in the Salford dressing room as the referee blows the final whistle.

Man of the Match: Matty Kosylo

Glad you enjoyed the Shay Experience !
Regarding the coffee...bring a flask.

We like to contribute to the club's coffers, but it really was awful, and we don't like to be negative about our days' out.

Halifax v Sal£ord Match of the Day in Conference North? Really? Should have got yerself over to Stockport V Darlo. You wouldn't have dared take your eyes off the pitch to drink a coffee! And ye Olde Vic opened at lunchtime. Best boozer in Cheshire

Hey sticky have you been to ilson town ? You need to go to the dewdrop before the game but go hungry and check out their cheese n onion cobs they are dynamite !

Go there hungry . Have a dynamic cheese n onion cob with oakham ales