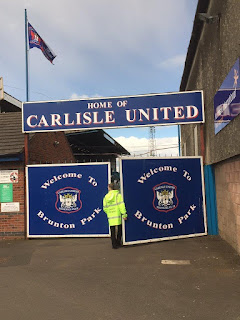 It's 7:00am on Saturday morning, I'm mooching about the kitchen making a brew. Today I'm ticking off my final Northern professional football league ground. It's 78 out of 92 after a painstaking 40 years of travelling up and down the accident-prone motorways of England.

We leave Murphy the budgie sulking on his perch, waiting with anticipation for his Uncle Brian Matthew and the Sound of the 60s Show on Radio 2. Ms Moon has fuelled-up with a large skinny decaf latte from Costa Coffee, where I'm on first-name terms with all the staff.

The dreaded M6 rears its ugly head with breakdowns and roadworks galore. We're hooking up with Oxford United fan Chris Hepburn, who has very kindly snapped up some tickets for us on the away terrace. Ms Moon and 'Heppers' used to work together as teenagers at Asda in West Bridgford, Nottingham, back in the day. It will be the best part of  30 years since they last met. I'm playing the part of Eamonn Andrews off This is Your Life. 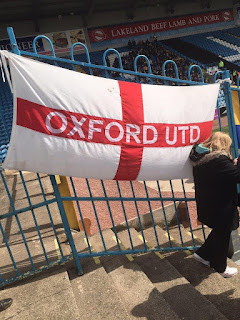 Graham Norton has banged out a couple of good tunes including 'Stop Me' by Mark Ronson featuring Melbourne-born singer Daniel Merriweather. We're heading up Botcher Gate into the city centre. It's a grim part of town with some ugly buildings including a hotel we were supposed to stay in. Ms Moon cancelled the reservation after a flurry of poor reviews on Trip Advisor. It's adjacent to the Sexual Health Clinic - I'm not sure if the two are in a partnership.

The haunting voice of Nick Cave on the radio adds to the depressing surroundings. Professional drinkers clog up the entrance to Wetherspoon watering holes the Woodrow Wilson and the William Rufus, that are situated only a few hundred yards apart. A plethora of retail parks cause traffic congestion. We finally pitch up at the back of the old fire station, before wandering up to the King's Head on Fisher Street. 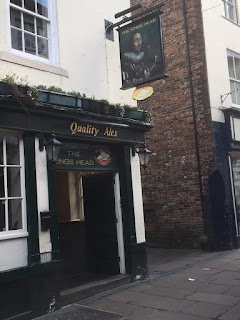 I shout up a pint of Boltmaker from the Timothy Taylor stable. Ms Moon has soup with a chicken baguette, I opt for a full English fry-up that I hope will keep me going until our evening meal at the Pheasant Inn at Casterton, just outside Kirkby Lonsdale. We take a window seat and peer out into the street. Heppers rocks up after two days of horse racing at Redcar and Musselburgh. He's reunited with Ms Moon, who says the last time she saw him he resembled Nick Rhodes from Duran Duran.

The pub jukey or i-Pod shuffle treats us to the Teardrop Explodes and EMF. Five Star's 'System Addict' results in a mass exodus across the road to the bookies. Heppers is a bundle of nerves as Oxford United stumble across the finishing line. We kill a bit of time at William Hill's. Ms Moon fancies an Oxford and Man Utd double. We park up at a youth centre, a ten minute walk away from Brunton Park. 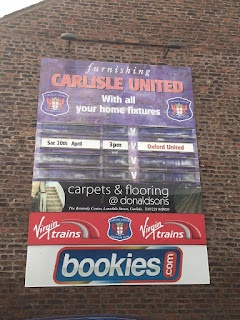 Carlisle is a city and county town of Cumbria and is located at the confluence of the rivers Eden, Caldew and Petteril. It lies 10 miles south of the Scottish border and has a population of over 70,000 people. Carr's (now United Biscuits) began baking in 1831. I've  always manage to find a half-eaten packet of their water table biscuits in the cupboard, but never have any cheese in the fridge. Production was halted in January 2016 after the factory was flooded. Both the builder John Laing and the haulage company Eddie Stobart have their HQ in the city. 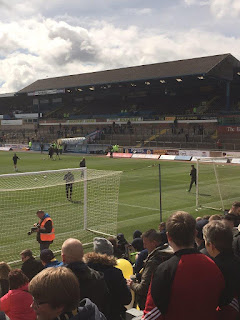 We head down the Warwick Road, past red-bricked Victorian houses with huge bay windows. The Beehive pub is across the road - Northern Crisis are playing there over the weekend. We're directed by a friendly steward to the far side of the ground. It's £16 to stand on the terrace (thanks Chris) and just £2 for a programme. The ground is proper old school. I love the two tier rickety old stand to the right of the away end. 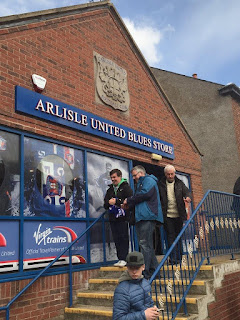 Ms Moon and I viewed Carlisle up at Morecambe a few months back. They didn't turn up for over an hour, but a couple of inspired substitutions turned the game on its head, when they scored two goals in a minute to snatch a game from the jaws of defeat.

Oxford are warming-up at our end. I recognise coaches Chris Allen (ex NFFC) and Derek Fazackerly who followed Kevin Keegan around. They look to have a lot of young uns. It's the business end of the season. They'll need a win to stay with the chasing pack, and will need to do it without leading scorer and Sky Bet Player of the Year Kemar Roofe. The Oxford chairman has shouted up 1000 pints and 1000 pies for the travelling fans at the The Magpie on Victoria Road. 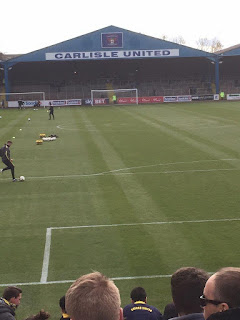 Oxford's manager is highly-rated coach Michael Appleton. He's settling in following a few false starts at crisis clubs Portsmouth, Blackpool and Blackburn. The best warm-up songs are from The Killers and Dario G. £150,000 was spent on this freshly-laid pitch, following the floods. It's now, ironically, being doused with water from sprinklers.

Oxford play a beautiful game from the off. In the fourth minute Danny Hylton sees off the full back before finding Maguire, who is upended for a stone-wall penalty. Maguire keeps a cool head, with hands on hips, his run-up is short, arcing in from right to left, his strike is perfect and finds the inside corner of the net.

Local boy, Callum O'Dowda is running the show. His fleet of foot, change of direction and pace is bamboozling the Cumbrians. Oxford are shanking, scuffing and mistiming good opportunities as a sluggish Carlisle fail to get a grip on the game.

Penrith-born left back Danny Grainger is getting rinsed. He throws the ball like a hand grenade, and takes all the corners and set-pieces. Carlisle manager Keith Curle parades up and down the touchline in Savile Row attire. He's sporting a smoking jacket and beige trousers, fit to wear for a Gentlemen's Evening. His team inch their way back into the game, but find the Oxford rearguard in fine form. 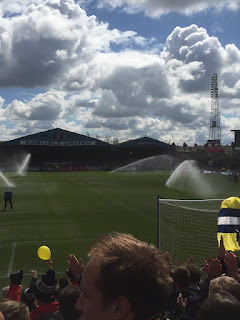 Half-time allows a nervous, ashen-faced Hepburn a couple of toilet breaks as his stomach continues to churn. He turns down offers of hot food and cold drinks, preferring to chew on gum more furiously than Sam Allardyce and Billy Davies.

Carlisle have had a Keith Curle hair-drying at the break. They play with more purpose in the second half.  It's like a cup tie, as the Cumbrians turn the screw. Against the run of play Oxford make it 2-0 with a smart finish from Liam Sercombe, who fires under the 'keeper Gillespie from close range.

At the end of the game an exhausted Oxford team can barely raise their arms to clap the 2238 visiting supporters who have stood on an open terrace that has not been used since the visit from Everton in the FA Cup in late January.

Man of the Match: Callum O'Dowda (and Heppers) xx
Posted by Sticky at 7:01 PM