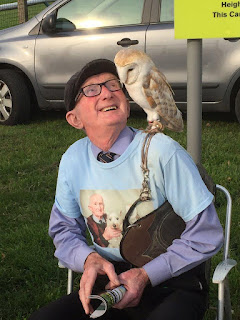 I can hear the Nottingham racecourse PA announcer calling out the horses names as I slam shut the front door. I jaywalk across Daleside Road, which is clogged up with rush-hour traffic, and head down Racecourse Road towards the Colwick Hall Hotel. I peer through a clearing in the hedge as horses are loaded into the stalls; they're out in a flash.

I chance upon an elderly gentleman sat on a chair at one of the entrance gates, with a snowy white owl perched on his shoulder. Kim is five years old and lives on a diet of one day old chickpeas. I continue my walk, dropping into the Starting Gate, as my thirst needs quenching. I sink a pint of Spring Fever from the St Austell Brewery at £2.57 with CAMRA discount.

I stroll through some woodland as the vista of the grandstand at the racecourse comes back into view. The first horsebox I clock is one of leading flat trainer John Gosden from Newmarket. Three year old fillies are eating up the turf as they gallop up the final furlong in the 6:10pm. John Gosden's Snow Moon has won by three lengths at even money. All the clues were there Sticky - the snow owl, Gosden's horsebox and Ms Moon with her snotty nose, back home, slouched on the sofa watching Jeremy Kyle. I should have put my house on it. 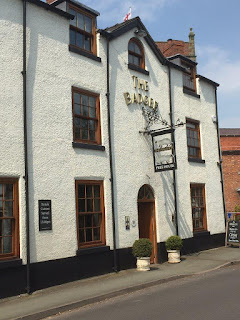 It's Saturday morning and I'm having a chinwag with nasty Norwich fan Murphy Palmer the budgie. I took him to the vets last week to get his nails clipped. In the surgery waiting room he was surrounded by dogs whimpering, cats meowing and parrots squawking. Above it all you could hear Murphy whistling the Canaries anthem 'On the Ball City.' It was a different scenario on the operating table. He greeted the veterinary surgeon with a 'Glasgow Kiss' before being grabbed around the neck in a lock, with the vet's first two fingers and with a terrifying look his nails were clipped. He's still traumatized to this day.

We're in the 'Rolls Royce' today - Sticky is piloting. I hare down the A50, through Stoke and onto the A500. Today is the final game of 'our' groundhopping season. We've not missed a Saturday game since July 12th. I've earmarked The Badger at Church Minshull for lunch which is also a Good Pub Guide tick-off. It's a recently refurbished 18th Century coaching inn. I have a pint of Badger from the Tatton Brewery. Co-pilot Ms Moon has Stilton and celery soup accompanied with Beef and horseradish sauce on sour dough. Sticky plumps for Whitby scampi on flatbread. 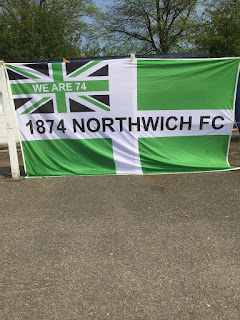 Winsford is a short 15 minute drive away. 1874 Northwich groundshare with Winsford United at the Barton Stadium. On 15th November 2012 disillusioned fans of the Northwich Victoria Supporters' Trust voted with broken hearts to run a democratically supporters-run club.
Northwich is a town in Cheshire with a population of 20,000. It was once well known for its salt mines. Famous folk born or raised in the town include: The Charlatans lead singer Tim Burgess, singer Rupert Holmes (Pina Colada hit is a classic), FA boot 'n run merchant Charles Hughes and goalkeeping cousins Michael and Andy Oakes.

We park up on West Dudley Street, a no through road. A blue-aproned chef from the Phoenix Chinese and English takeaway throws away uneaten bagged-up food into a wheelie bin. The Top House pub is stacked out with beer-swilling Colne fans who are basking in the baking heat. 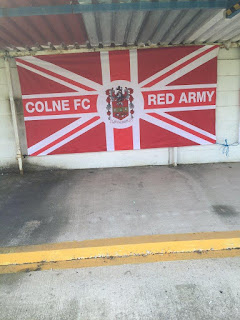 A draw today is enough for the visitors to clinch the North West Counties League title. We caught them on a dark, miserable day up in Birkenhead. Cammell Laird were ruthless on and off the pitch. Colne were thumped 4-0. They lost all discipline. Three players were shown Red and two coaching staff were ask to leave the technical area. Fair play to manager Stephen Cunningham for fronting it up and apologising on behalf of the club on Facebook. He went up in Sticky and Ms Moon's estimations.

The ground is a belter. It's £6 on the gate and £2 for the programme. On the nearest touchline is a rickety old stand with blue tip-up seats. Behind the far goal is a grassed area making the view at least 30 yards to the goal net. There is cover running along the farthest touchline and an open end behind the nearest goal. 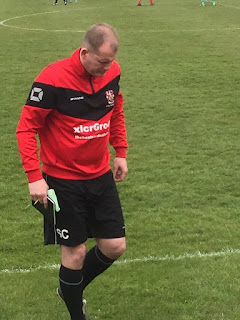 Colne FC manager Steve Cunningham is a clever guy. He allows his team a relaxed warm-up, to relieve the tension. He shakes folks hands, fusses his Mum, acknowledges anyone who wishes him good luck. Ms Moon admires him. Inwardly this guy's stomach is churning. Nine months work rests on one game. Leading scorer Jason Hart is suspended.

One of the Northwich subs complains that he has forgot his suncream. Cunningham strikes up a conversation with some Northwich committee members. He says that he likes 1874 Northwich very much, but won't miss the North West Counties League if they go up. It's said without any malice - just maybe one or two clubs have niggled him. 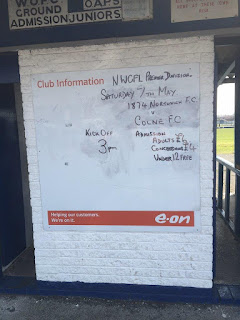 The pitch is bobbly and bumpy and killing these players. Northwich are direct, Colne don't trust the pitch. Their game is hurried. They snatch at chances as nerves set in. Northwich waste two good chances as neither 'keeper is fully tested. I'm stood next to a Runcorn Town fan who can't abide Runcorn Linnets. If the Linnets score 6 goals at Padiham and Colne lose, then they will be crowned as champions - they're already two the good.

Colne have rocked up with 250 fans. Two of these are different class. Landlords Winsford United have been broken into two days ago. The bar has been trashed and the till smashed to smithereens. They walk circuit after circuit of the ground politely asking for donations to help Winsford. They raise £178 - this is why I watch and support Non League football. It brings a tear to my eye when they announce what these boys have raised.

It's still nip and tuck in the second half. Cunningham sends his troops out early to avoid a claustrophobic changing room. Danny Boyle begins to come alive, as his partner Ben Wharton, a good hold-up player, is well shackled by 1874 centre half Craig Farnworth. Colne's long throws are always speared in too close to the 'keeper who is catching for fun. 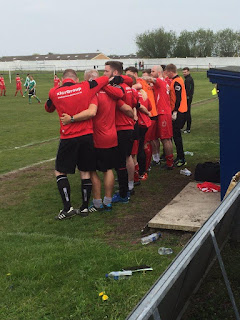 The game-changing moment happens on 65 minutes. A boy called Joel Melia is thrown on by Cunningham as Colne go 4-3-3. Cunningham is sweating buckets when he hears Linnets are 3-0 up. Meila's impact is instant. His low sense of gravity and positional sense creates width for the team. He survives a couple of bollockings from Cunningham, but the boy is never say die. I saw him play for Barnoldswick at Tadcaster during a 5-0 drubbing - he has the heart the size of a bucket.

Meilia picks up the ball on the right, he drifts past a defender, muscling him off the ball, before pulling the ball back from the byline. Danny Boyle flicks it up before firing a shot it into the corner of the net, despite the 'keeper's best efforts. The reaction is tear-jerking. Subs, coaching staff and players run to pile on Boyle - the relief to all is breathtaking.

Cunningham instructs the subs and coaches to form a line before the final whistle. The celebrations are wild and ad-hoc. We leave them be. It's not just about today - it's a been a long season.

Glad you enjoyed the day along with all the Colne fans. Try to make it to the XLCR Stadium where you will receive a warm welcome.

Would I possibly be able to use this article in the Squires Gate programme for our game against 1874 Northwich?

If you could contact me at haydendan@live.co.uk, thank you