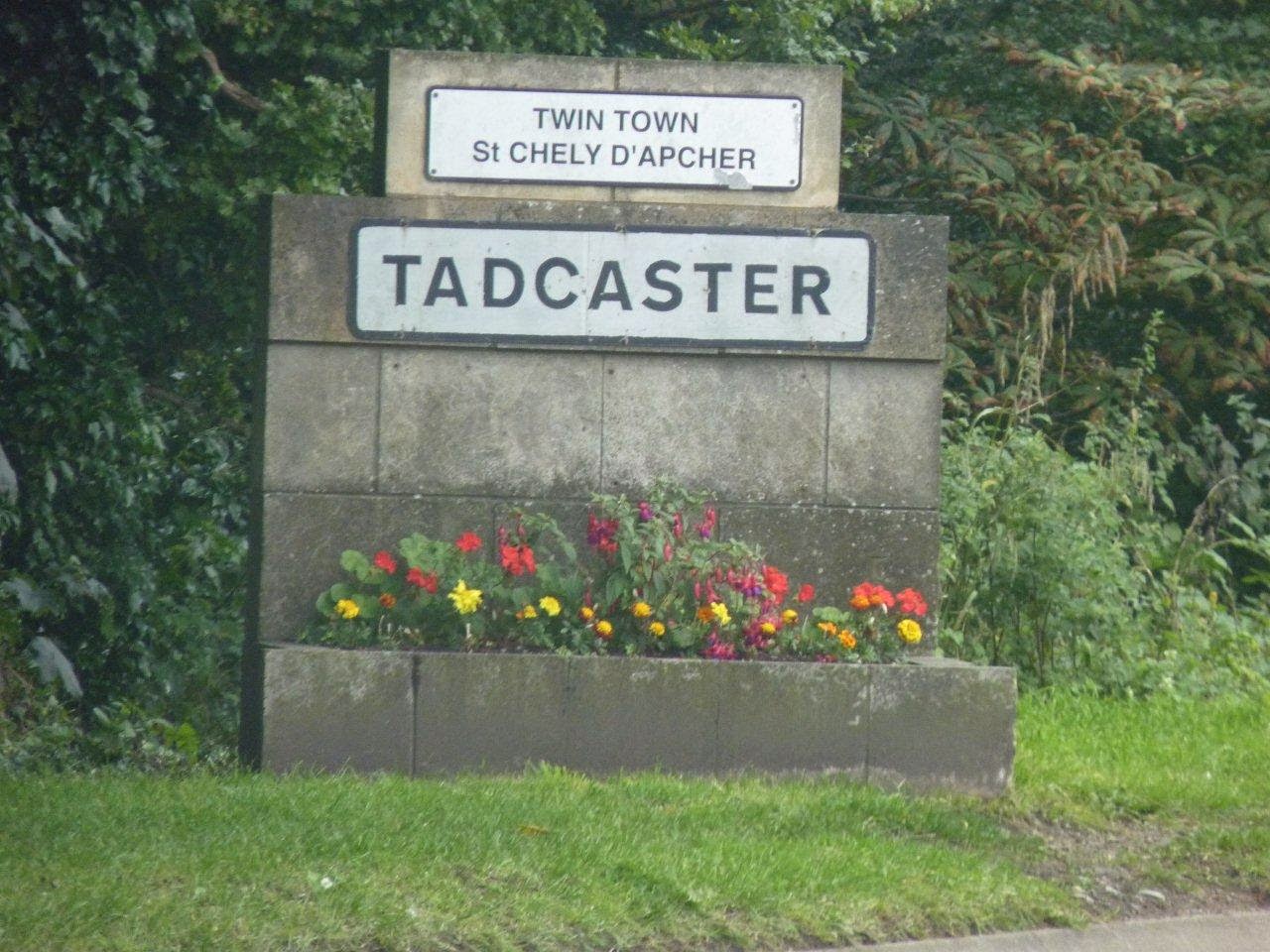 I drive up Nottingham Road towards Keyworth village centre. I swing left in The Square onto Selby Lane, one of the most affluent parts of my village. I'm soon breezing through the countryside towards the village of Widmerpool. At first I don't recollect where St Peter's Church is located. Memories flood back of a friend's wedding over 25 years ago.

I park up on some scrubland across from the churchyard. I want to pay my respects to one of the greatest talent spotters this country has ever produced. I walk through the gate, up some steps and branch off to the right. It doesn't take long to find his grave. There are no fresh flowers and his headstone is lob-sided. Peter Thomas Taylor is laid to rest here. How Nottingham Forest could with him right now and one of his Non League gems like Garry Birtles or Peter Davenport.

Five days later I'm walking through a sea of German replica football strips with the names Muller and Klose printed in black lettering on the back of white shirts. I'm in the Majorcan seaside resort of Cala Millor. Clough and Taylor always brought the players out here after to celebrate a League title or European Cup final win. 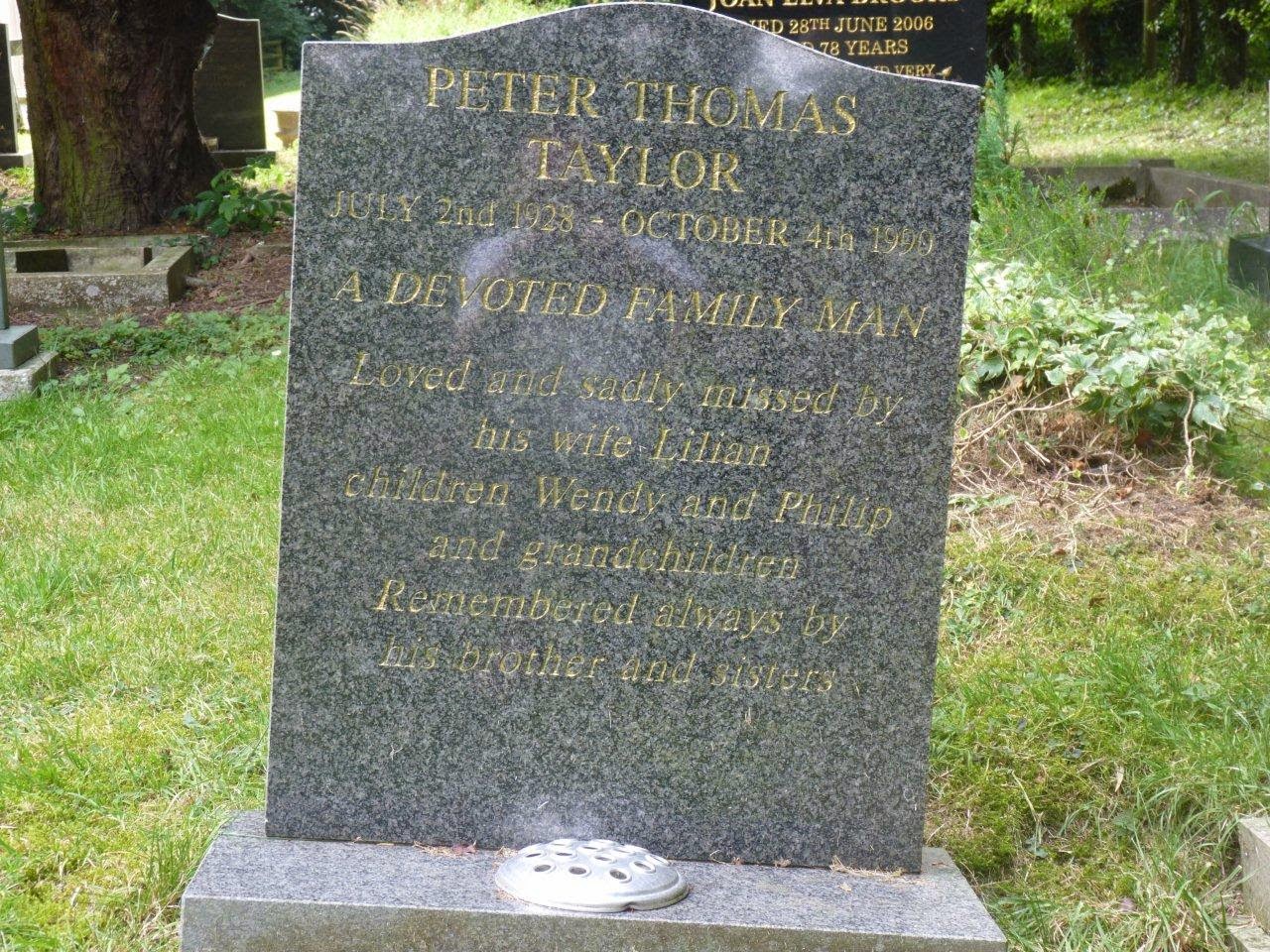 I clock the Sportsman's Bar beneath the Cala Millor Park Hotel. I order a bottle of ice cold San Miguel and get chatting to a lass behind the bar from St Helens. There are hundreds of photos of Nottingham Forest players and management. There's folks like Liam O'Kane, Ronnie Fenton, Alan Hill and of course Clough. Sadly there's not one of Peter Taylor, who died in this resort at the age of 62 in 1990.

I don't wake up until 9:00 on Saturday morning. Murphy the Budgie is livid; he's already missed one hour of the Brian Matthew's Sound of the 60s Show. I try to make amends by unwrapping a honey bar I bagged from Wilko's in Loughborough for 50p. But the mardy little sod is having none of it and turns his back on me.

I make a pot of tea for one. I lob a Yorkshire Tea teabag (hard water only) into the pot. I have a breakfast for kings - Marmite on toast. I wander down the garden towards Finley the rabbit's crib. It's our favourite time of the week. For 8 years now Finley has had a stab at a Non League score prediction at the game I'm going to. 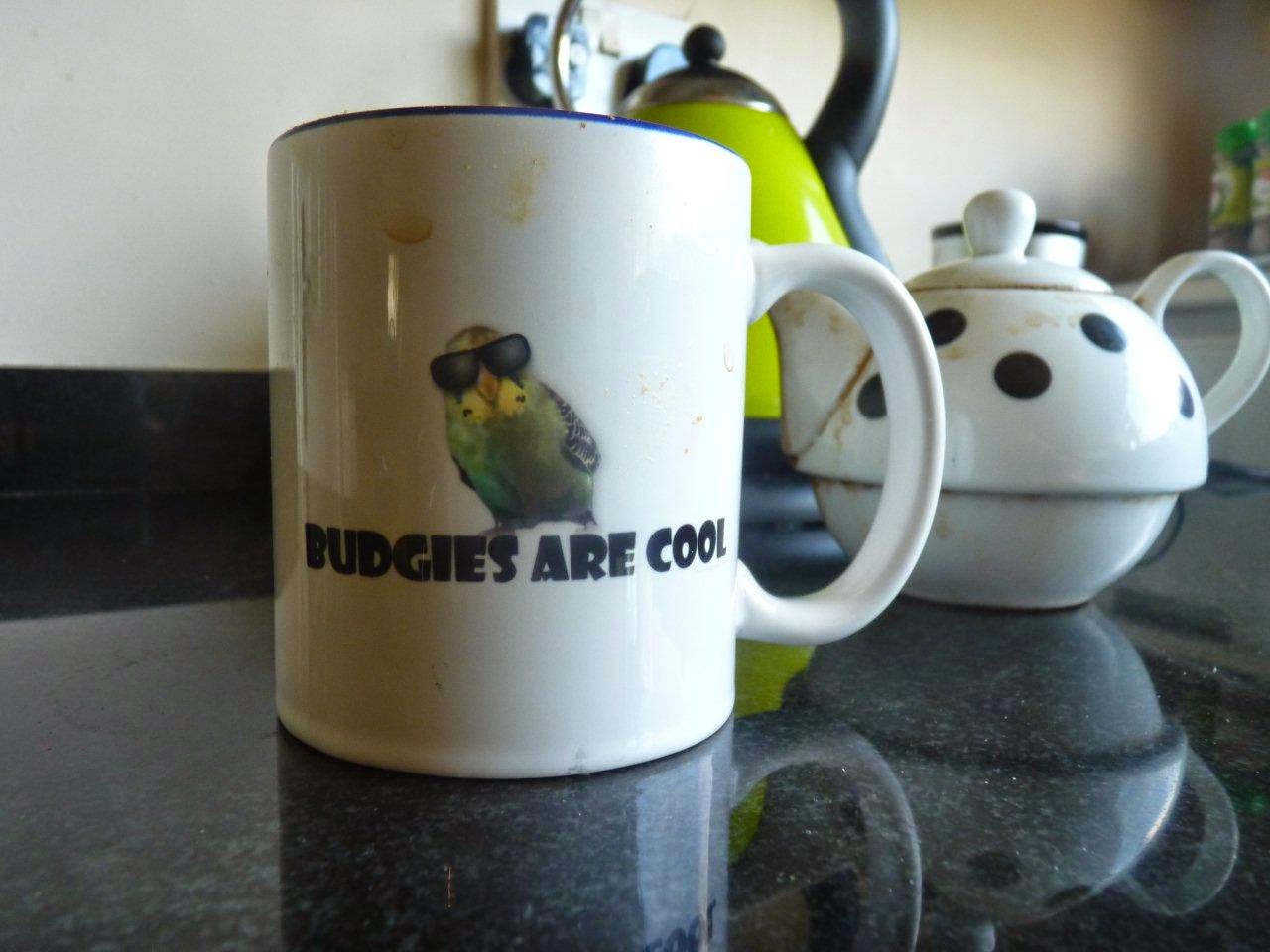 What the hell are my spectacles doing in Finley's yard? I only had one can of 1664 last night. I don't recall any rough 'n tumble or frolics with my eldest lad. I pick them up and place them in my pocket. Finley says that Taddy will thump Barlick 3-0.

The bloody A1 is a pain in the arse. There's standing traffic at Junction 34. I pull off onto the M18 and go up the M1. I'm spoilt for choice on the radio today: there's Danny Baker on 5Live, Test Match Special on Radio 4 LW or Patrick Kielty on Radio 2 - the latter plays a Northern Soul classic - 'Do I Love You' by Frank Wilson.

The news is thoroughly depressing though: one man is dead and 31 are seriously ill after illegal immigrants are found in a container at Tilbury Docks. There's been a murder in Urmston in Manchester and a plane has had to make an emergency landing at Robin Hood Airport in Doncaster. 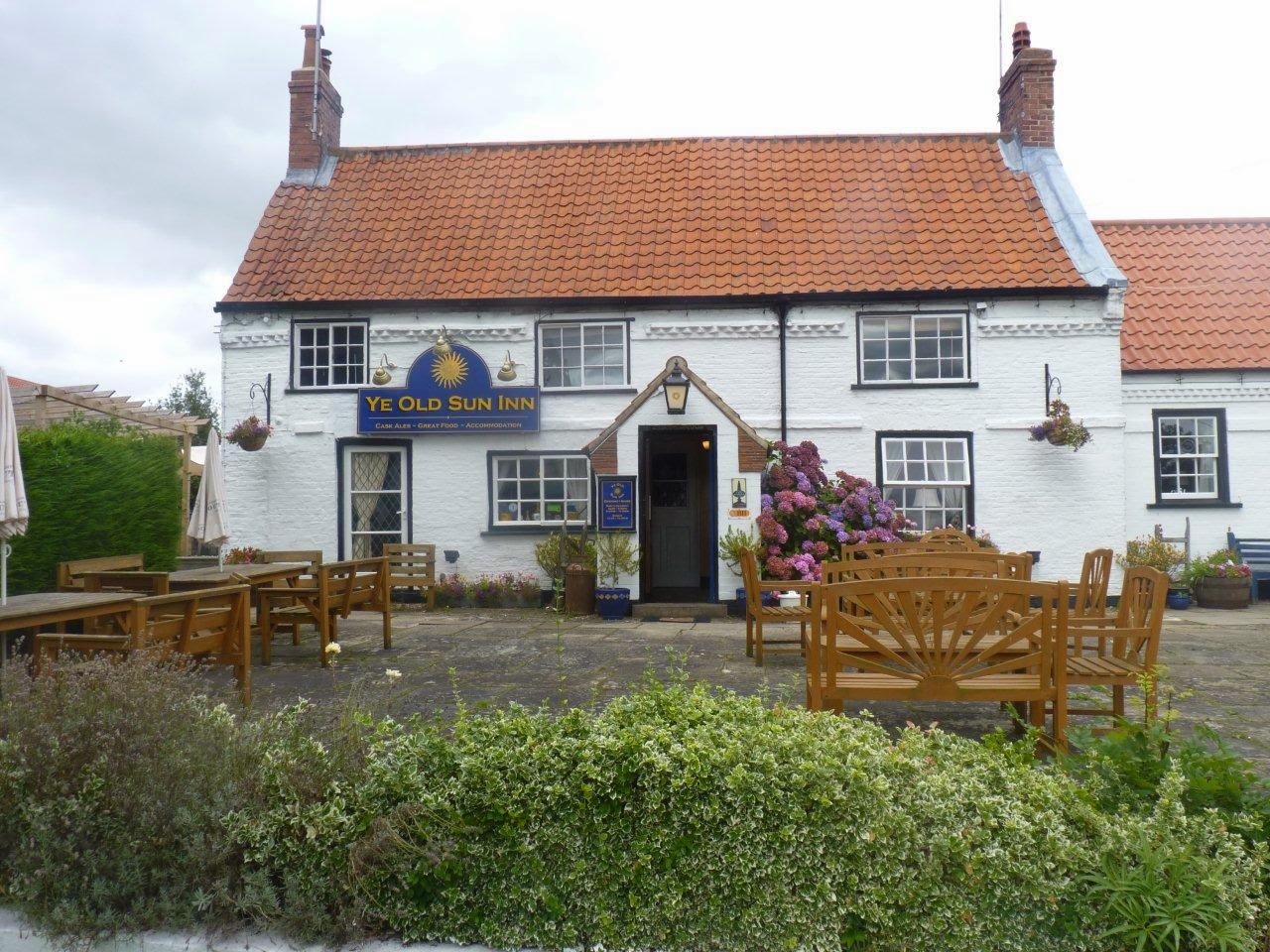 I roll up into the car park of the Old Sun Inn at Colton in North Yorkshire. It's too overcast and blustery to take a seat on the open terrace. I make myself snug in the bar of this 18th Century watering hole. A pint of Collingham Blonde is accompanied with a warm pork pie, mushy peas and a plant pot full of hand-cut Yorkshire chips. The music from the CD player is varied - we're treated to David Essex, Stevie Wonder and Kinobe - I'm that chilled out, I could have forty winks.

I've an FA Cup extra preliminary round match to go to. Tadcaster is a market town in North Yorkshire which lies on the River Wharfe. It has a population of 7000. It is famous for its three breweries: Tower (Coors), John Smith's and Samuel Smith's. 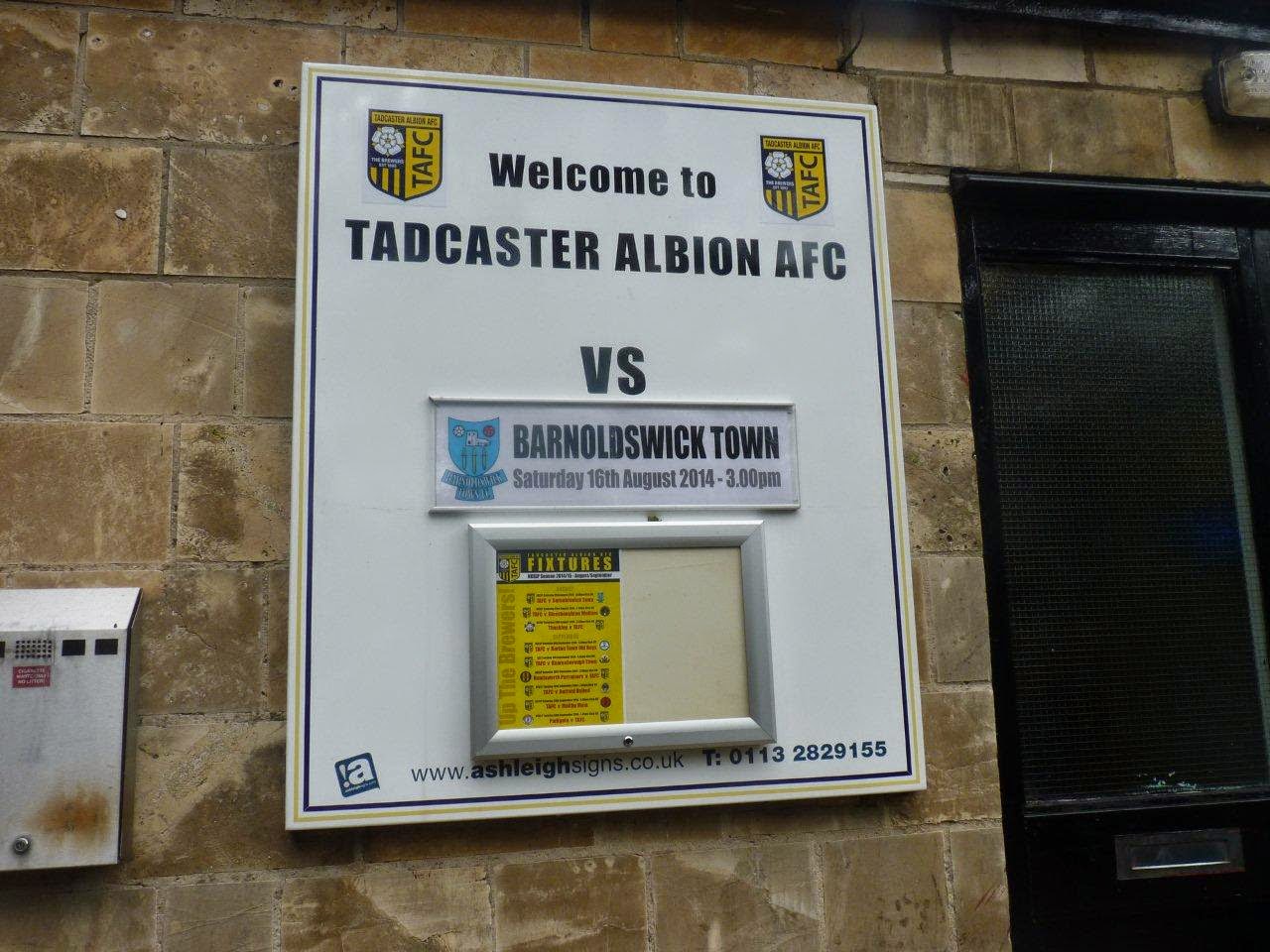 Tadcaster Albion were founded in  1892 (originally named John Smiths) and are nicknamed the Brewers. Today's visitors are Barnoldwick Town from Lancashire. I fell out with a pie-eating Barlick supporter a few seasons ago at Congleton Town. He spat flakes of pastry into my face and spilt gravy down my new coat from Next. I'll be hunting down that halfwit in the snack bar later.

The i2i Stadium is smack next to the John Smith's Brewery - there is no evidence of their sponsorship though. It's £5 on the gate and £1 for the programme which is a very informative and  professional read.

I'm taken a back at this beautiful tree-lined ground. With its quirky, steep wooden stand behind the nearest goal and the immaculate playing surface. That ruddy-faced pie-eater from Barlick will be rubbing his huge hands with glee at the thought of a fried chicken wrap or a Yorkshire Pudding wrap filled with beef and drenched in gravy (like my coat). 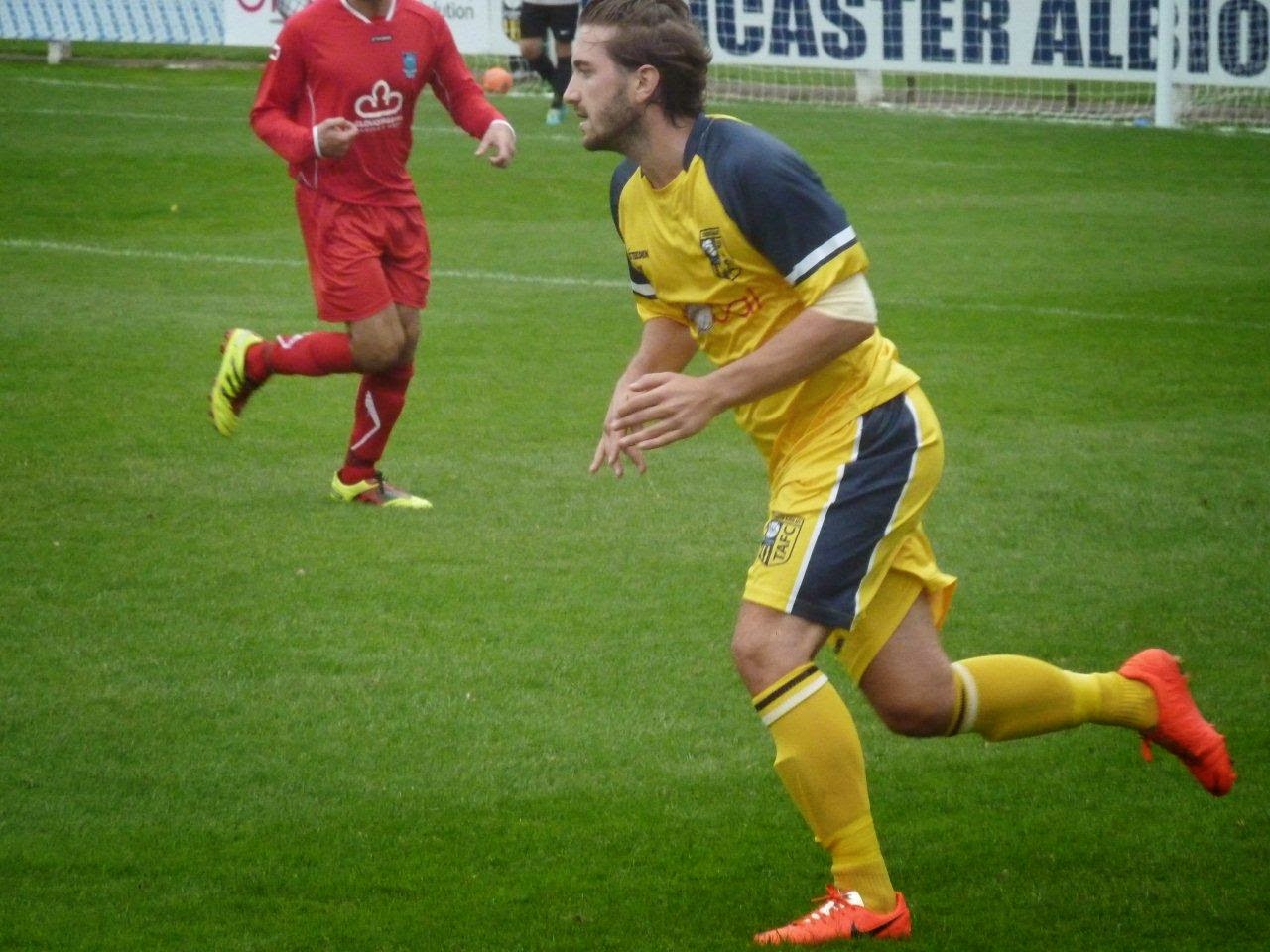 The stadium DJ thumps out some toons from Calvin Harris, Rudimental and Insomnia as the teams line up for the customary handshake.

Barlick took a 5-0 drubbing at Nelson during the week and they are soon behind to a Calum Ward 9th minute goal. Both teams spurn golden chances as Barlick inch their way into the game. The Brewers Josh Greening is light on his feet and has an exquisite touch. His brother Jonathan played for Man Utd, WBA, Fulham and Nottingham Forest.

The smell of yeast and hops drifts across the ground from the brewery. I scroll down my Twitter timeline. Bolton Wanderers and Nottingham Forest are two a piece at the Reebok Stadium. Sticky junior will be jumping up and down in his bedroom.

The Barlick defence has more holes than a string vest in the second half. Carl Stuart bags a hat-trick as Taddy run riot. Amongst the mayhem there is a shining light for Barlick. Their diminutive 11 jacket Joel Melia is worth every penny of the gate money. He ghosts past the home defence with ease. The ball sticks to his boot like glue. He shimmies, drops his shoulder and fizzes a shot just wide of the upright.  I'll watch them again, just to see him. His non-stopping running and energy levels are why I watch the beautiful game at this level.

Man of the Match: Joel Melia