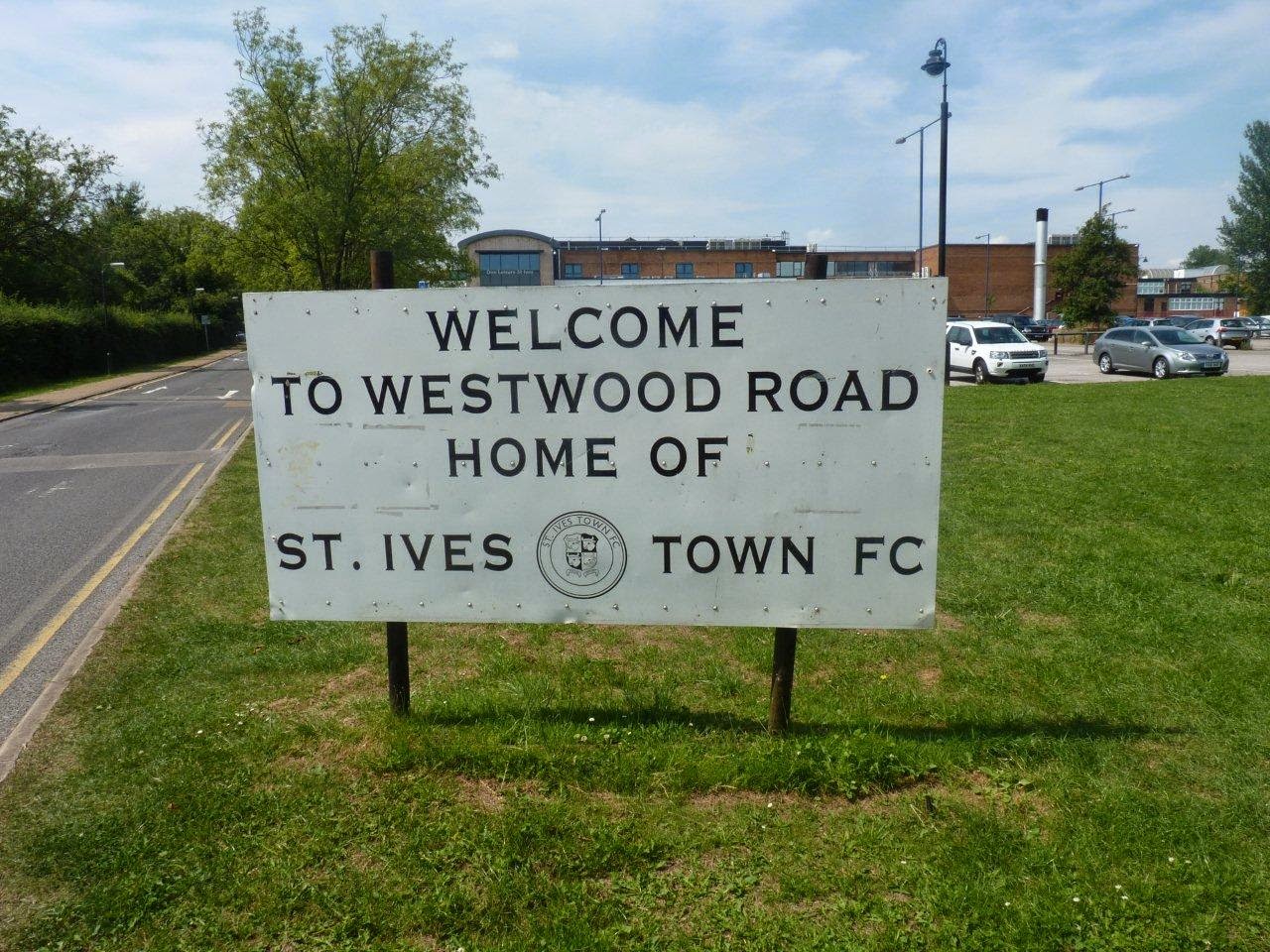 It's Friday June 13th. Forty colleagues crowd around me on the Sales floor of Ergo Computing, a place I've worked at for almost 15 years. I'm showered with leaving gifts and asked to say a few words. I'm struggling to keep my emotions. I'm touched by the lengths some folk have gone to, in ensuring I have a great send-off. I quaff a few real ales at the Ruddington Arms and say my farewells. It's time to close this chapter in my working life and move on to pastures new.

I'm sat with the Mayor of London and Big Bear Baker on the terrace of The Plough in the village of Wysall. It's a place where I will begin to write my book, when I finally get round to it. Earlier in the evening we'd stood aghast as Notts battered Yorkshire into submission in the T20 Blast. James 'Titch' Taylor thumped 'Sideshow' Sidebottom for 18 runs off 4 balls. James 'Aretha' Franklin smashes a six back over Tim Bresnan's head to win the game with 5 balls spare. I celebrate with a pint of 'Right Turn Clyde' from the Blue Monkey brewery.

I roll out of bed at 9:00am. Murphy is swinging on his perch, whistling his little head off to 'You've Lost That Lovin Feeling' by The Righteous Brothers. He's rewarded with some crack cocaine (sprig of millet) and a new chew bar. There's just time to re-fuel Finley the rabbit with some fresh water before dashing out the door. Finley's crap non league tip today is 3-0 to Histon. 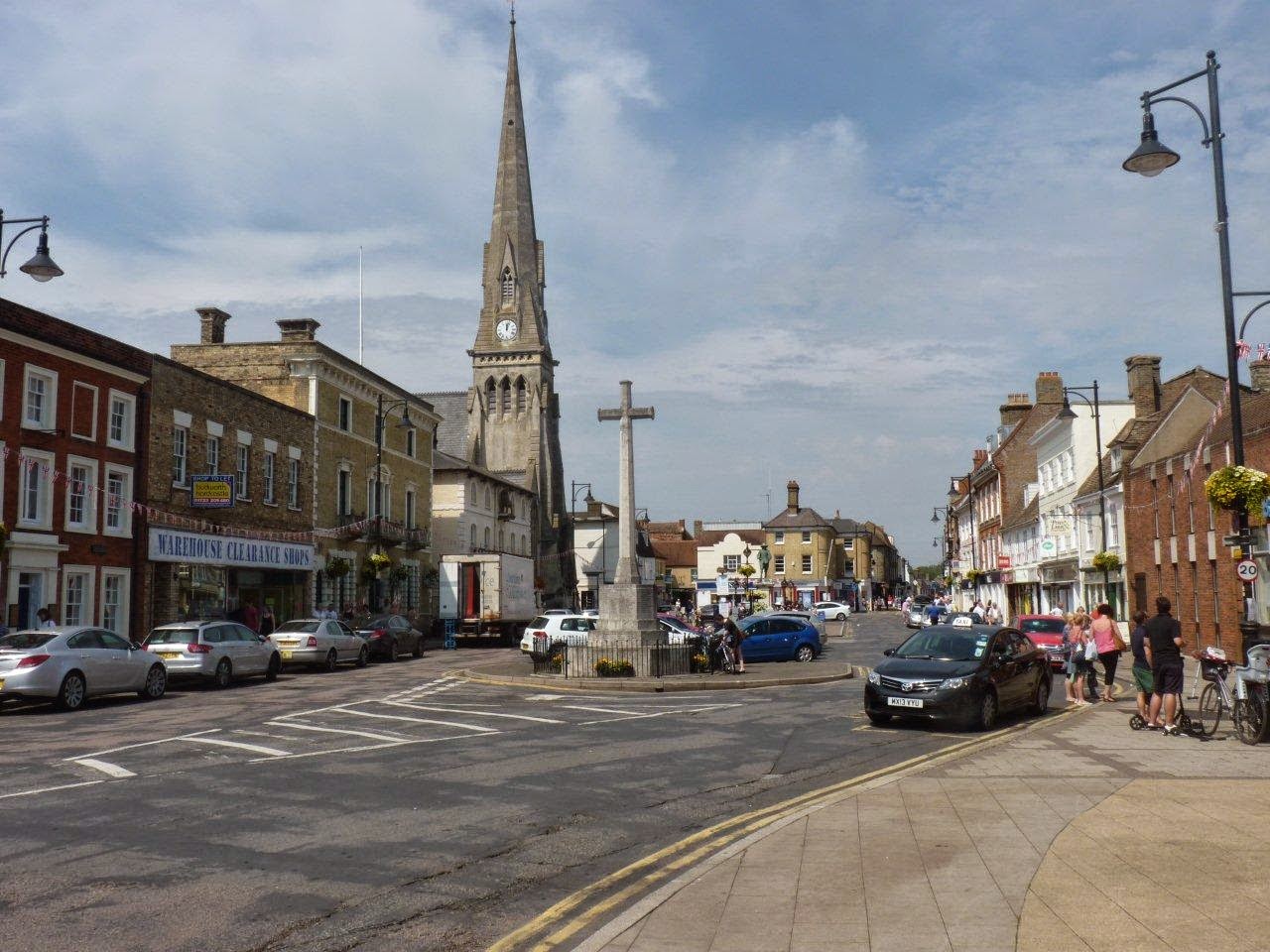 I shoot across to Grantham before joining the A1 towards Peterborough. Trumpy Bolton is going to be a bit miffed as he'd earmarked a trip to St Ives a while back. But I can't hang around all season waiting for him to pick and choose.  Anyway, it's a good opportunity to catch up with Histon again.

It's sweltering outside and good to have the air con on. John Bishop is standing in for Graham Norton on Radio 2. He plays the 1989 hit 'Can You Dig It?' by Manchester indie band The Mock Turtles.

I pull into a long stay car park as I fancy a mosey around this historic market town. St Ives lies 12 miles north west of Cambridge. It has a population of 16,000. Former heavyweight boxer Joe Bugner and his family lived in the town having fled Hungary in 1956 following the Uprising. 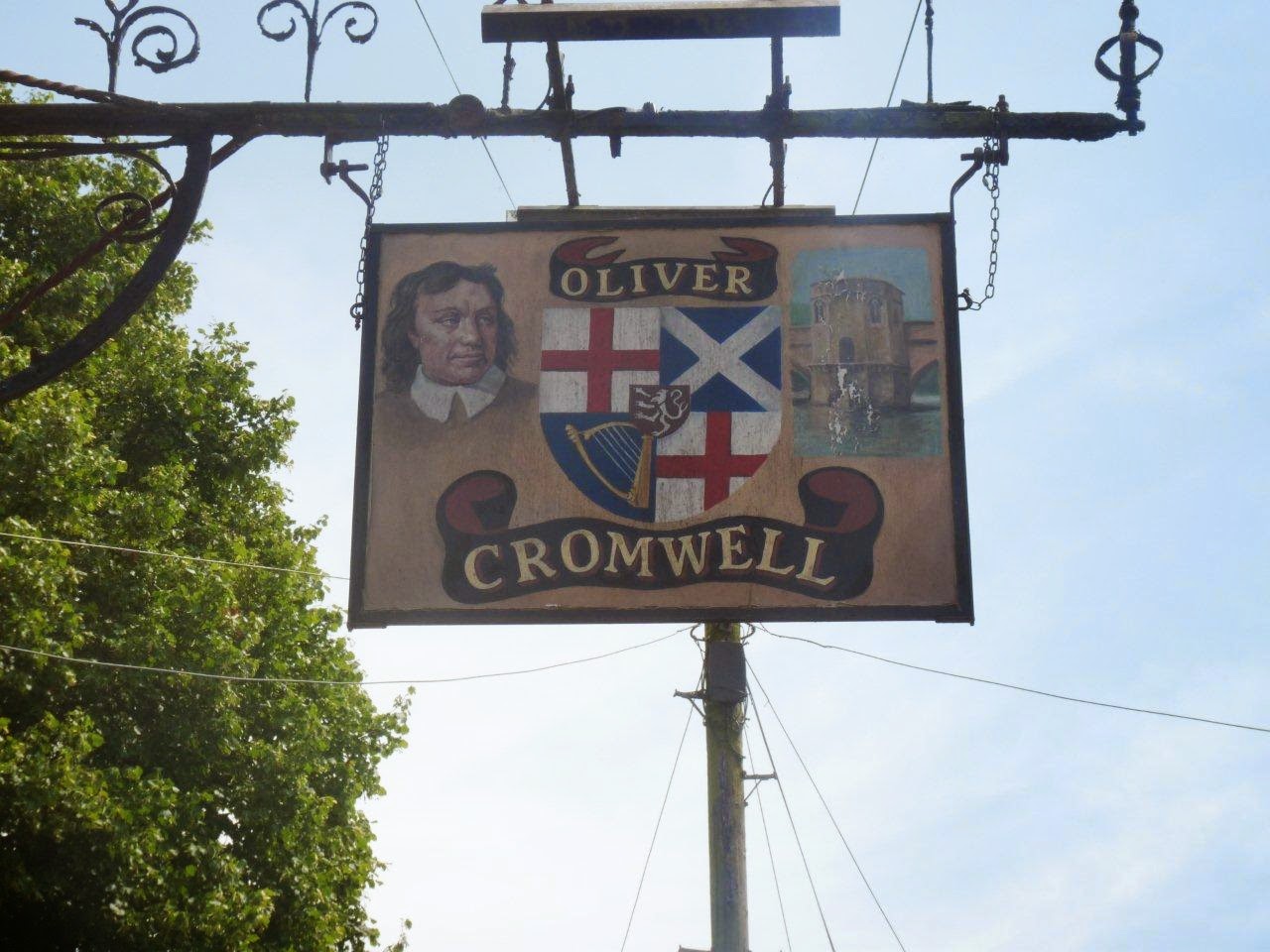 First port of call is Boots. I snap up a bargain pair of sunglasses at half price. I'll have the ladies of St Ives in all of a flutter once I wear these bad boys. I give the face-painting stall a wide berth. I don't want to get stung like Young Kenny did on the 'Phoenix Nights Open Day.'

After a bit of a wander around I finally chance upon the Oliver Cromwell public house tucked away in a side street close to the river. I order up a pint of Broadland Sunrise and a smoked salmon baguette. I sit in the courtyard. A chap in the corner sparks up more ciggies than Arsenal midfielder Jack Wilshere.

I wile away an hour or so pottering around the place. If you want your computing fixing, fish 'n chips, a Chinese take-away or a barbers then St Ives is the place to be. I pull into Westwood Road,, home of St Ives Town, in plenty of time. The club was founded in 1887. Striker Conor Washington scored 64 goals in 60 appearances. It earnt him a move to Newport County. He now plays for Peterborough United following a reported £500,000 transfer last season. 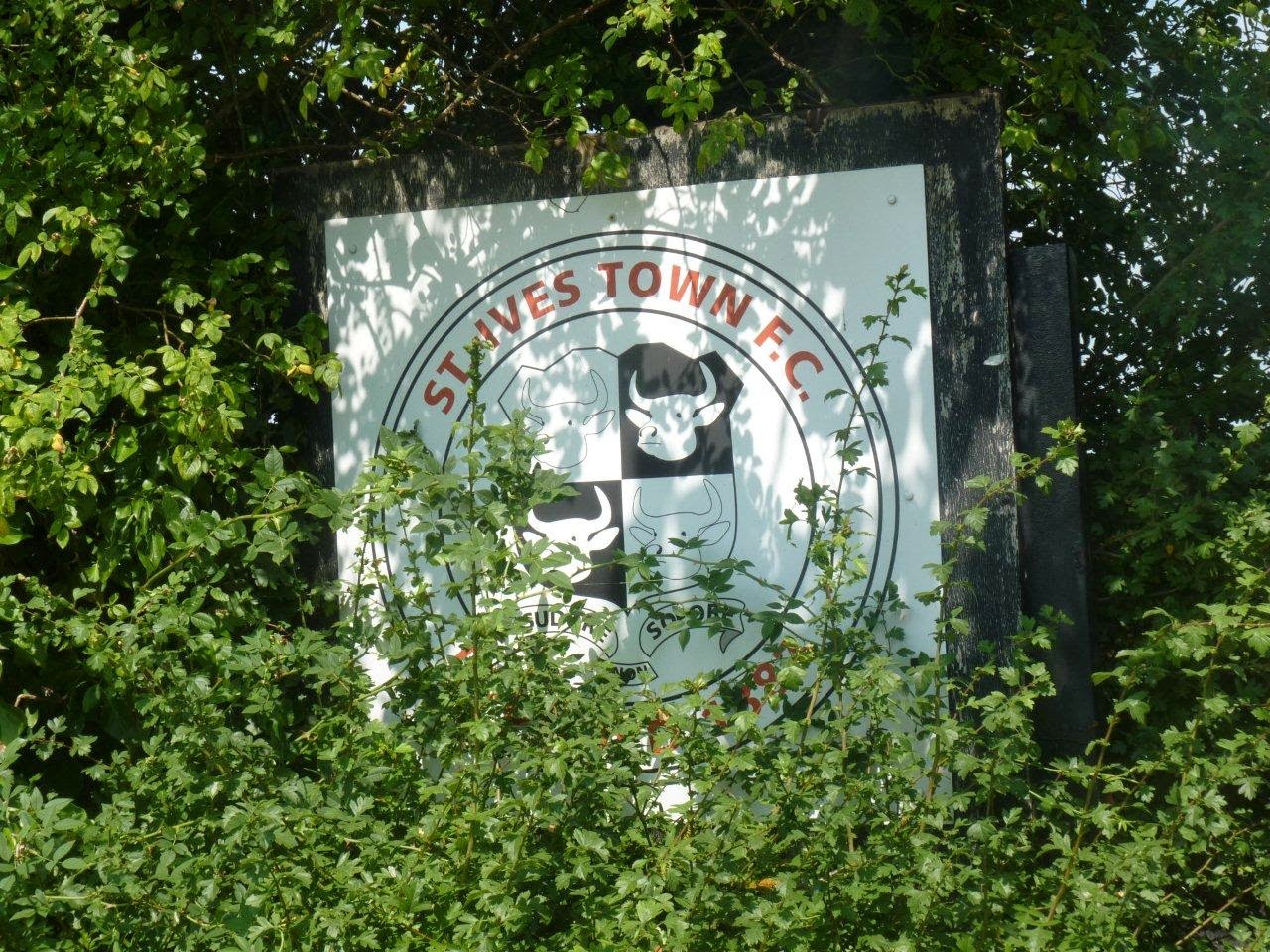 I grab a bottle of water from the Refreshment Hut and stroll across to the far side of the ground. I plonk myself in the stand and watch the rigorous warm-ups. Histon manager Brian Page eyes his team watchfully. There's no Gilbert O'Sullivan flat cap today. A guy in my stand annoyingly shouts down his phone like Dom Joly off  Trigger Happy TV. He then proceeds to have a sneezing fit as he downs a pint.

Histon will expect a stiffer test today than they did a fortnight ago at Cogenhoe. The first half is played at a pedestrian pace. Neither team look likely to hit the onion bag. Thoughts start to enter my head that there might be another bloody 0-0 on the cards. Ten minutes before half time Histon take the lead through McLaughlin. 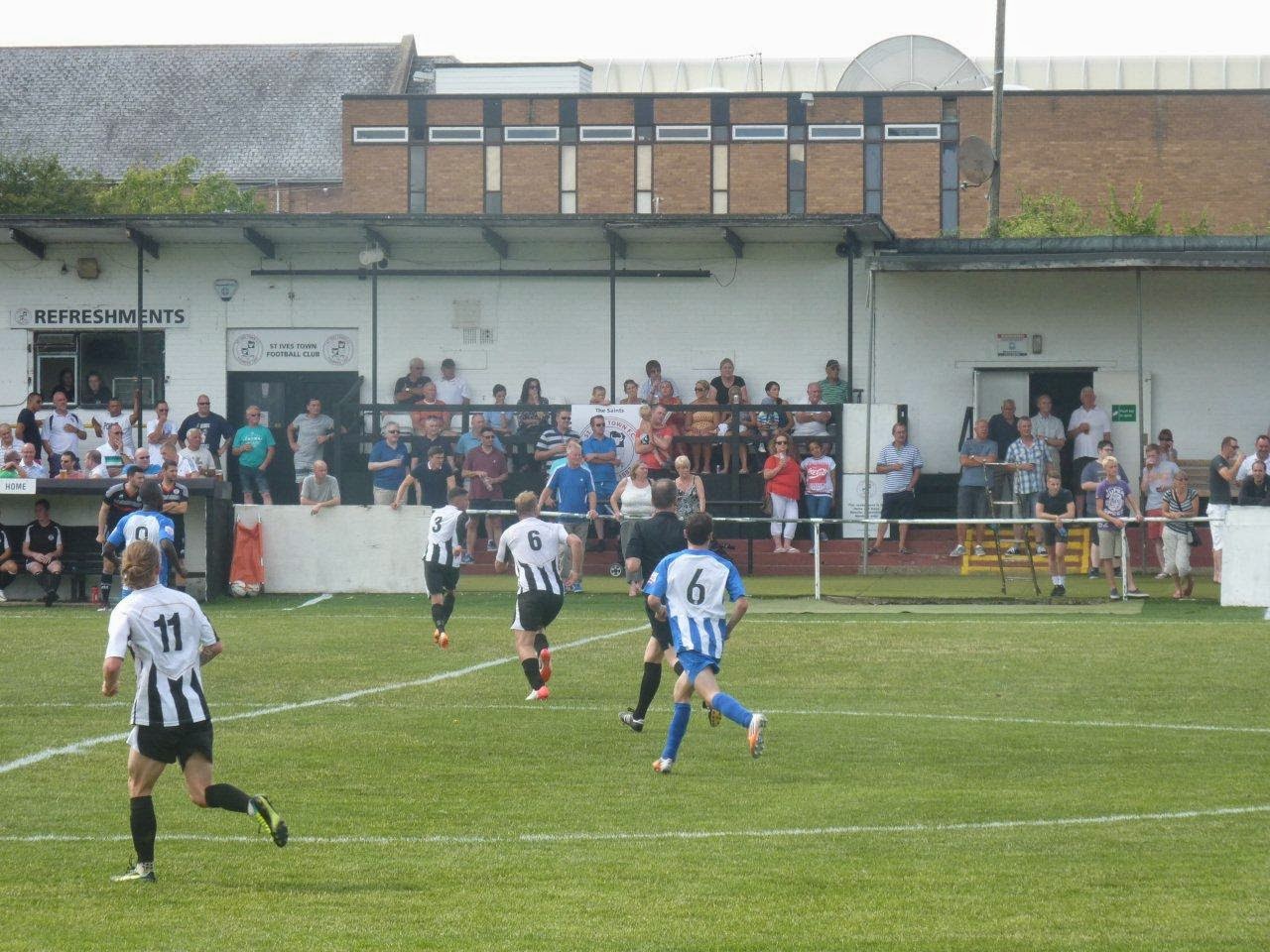 I decide to go and stand on the opposite side as two young lads have cheesed me off all game by getting up and down at regular intervals as well as rattling their packets of Skittles and Haribos every ten seconds.

There's an extraordinary incident just before the break. St Ives 7 jacket scurries down the byline and whips in a fantastic ball, the keeper comes out and is smashed with the stray boot of an incoming forward. The referee plays on. A woman next to me is incandescent with rage. She's giving the referee pelters and ain't shy in an eff or jeff too. St Ives No.7 tells her to "eff off." It livens up a dull game.

The second half is far more entertaining. The Histon 'keeper is forced into some fine saves. Histon wrap the game up with five minutes remaining with a strike from Relizani. Once again Histon's Peter Clark has caught my eye. His darting runs, change of pace and passing skills will surely find a bigger and better stage than this.