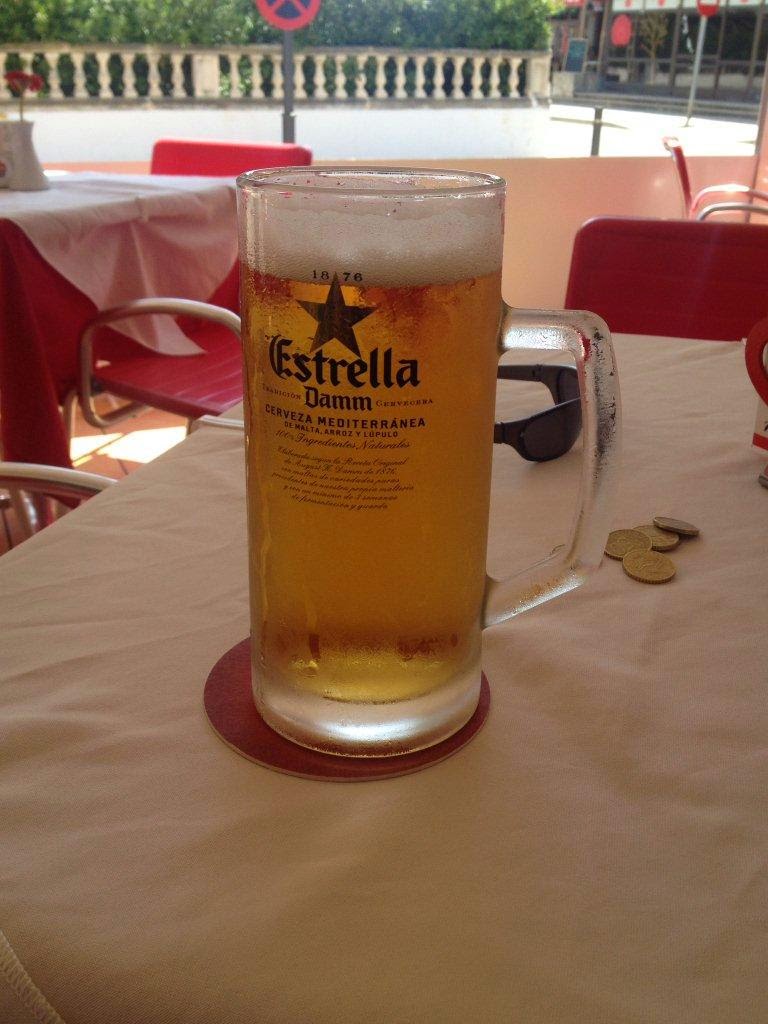 I am sat in a Spanish bar in the harbour of Cala Bona, in Majorca peering out towards the Med.  I wave my hand to gain a waiter's attention. He knows the score - Sticky loves his Tanqueray. I feel my phone vibrate. I fish it out my pocket. It's Tosh, the manager of Clifton: what the heck can he want at this time of night? "What's that Tosh, you've booked a late deal to Majorca and want to hook up for a drink on Thursday lunchtime." I see a pair of piercing eyes across the table: "Fancy another Gordon's, love ?"

It's 8 Euros on the bus to Cala D'or. We're meeting up with Terry, who is the general manager at Bulwell FC. He's staying at a villa tucked away behind the marina. We've arranged to meet in Smugglers Bar.

Bloody hell, it's hot today. I traipse down to the harbour from town, I'm sweating buckets. Thank Christ I'm wearing my Olly Murs straw boater. Smugglers is closed. I clock a local bar further down the street. The three of us are soon quaffing pint after pint of a local brew. Terry mentions that Bulwell and Clifton are to cross swords in the Central Midlands South Division a week on Wednesday. I promise to blog it. I have no recollection of the taxi journey home. As Tosh would say, I'm well and truely spangled. 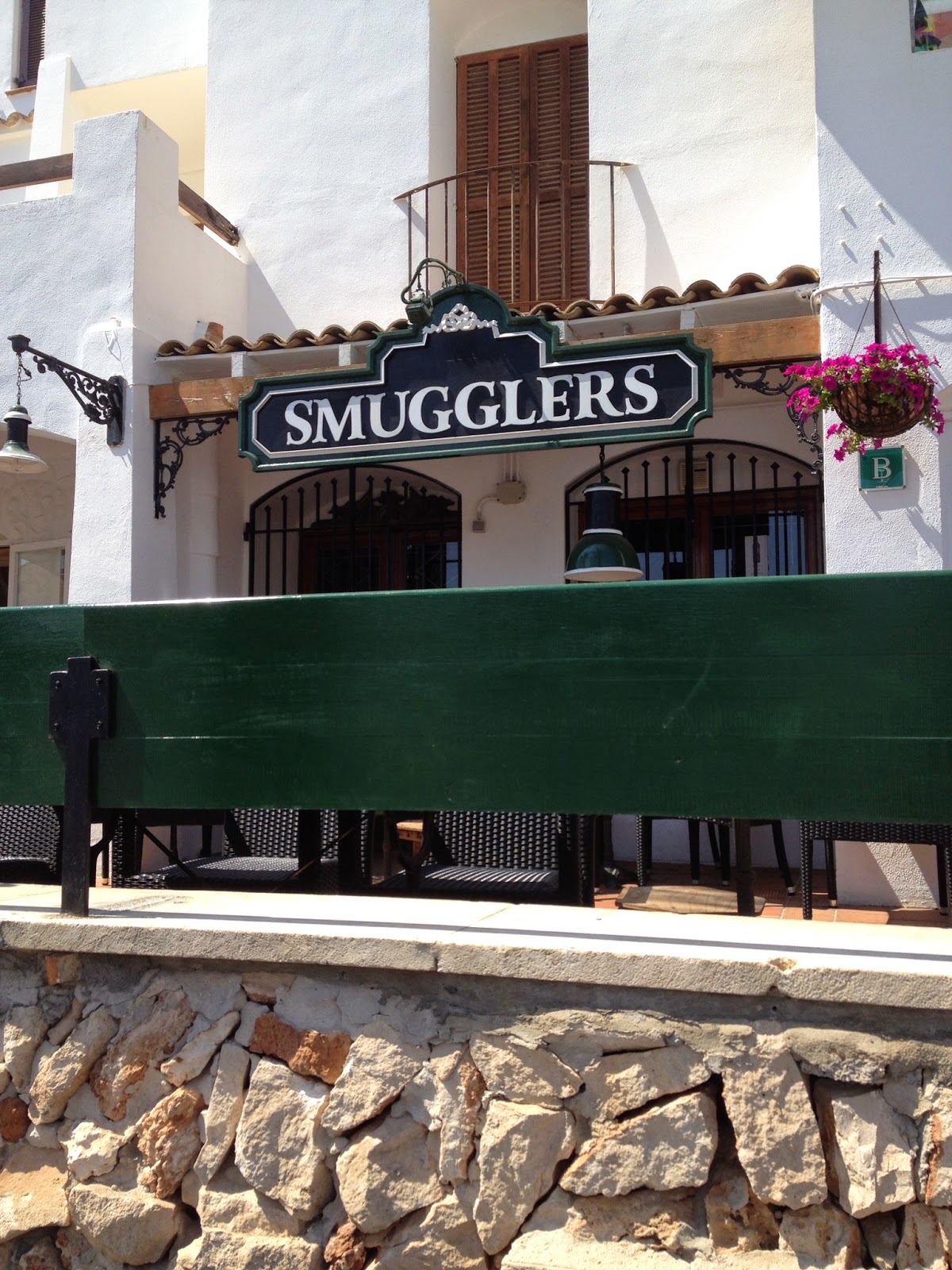 Five days later I'm stood with 'The Skipper' watching the dying moments of Clifton v Hucknall. All Whites are one to the good and are running down the clock. Hucknall score in the 94th & 96th minute. I can visibly see that Tosh and Steve Hardie are rocked and hurting.

I'm out the door at work at 5:30pm on the dot. I fly up the A60 from Loughborough to Nottingham. I'm greeted with the most exciting news of the day on arrival at home. Mrs P has bagged a 'Taste the Difference' ham hock and cheese sandwich for 74p, down from £3.

Regular readers will know that for the last 8 years Finley the rabbit has had a stab at the scoreline of any game I blog. He doesn't want to offend either Tosh or Terry. "1-1" he whispers in my ear. 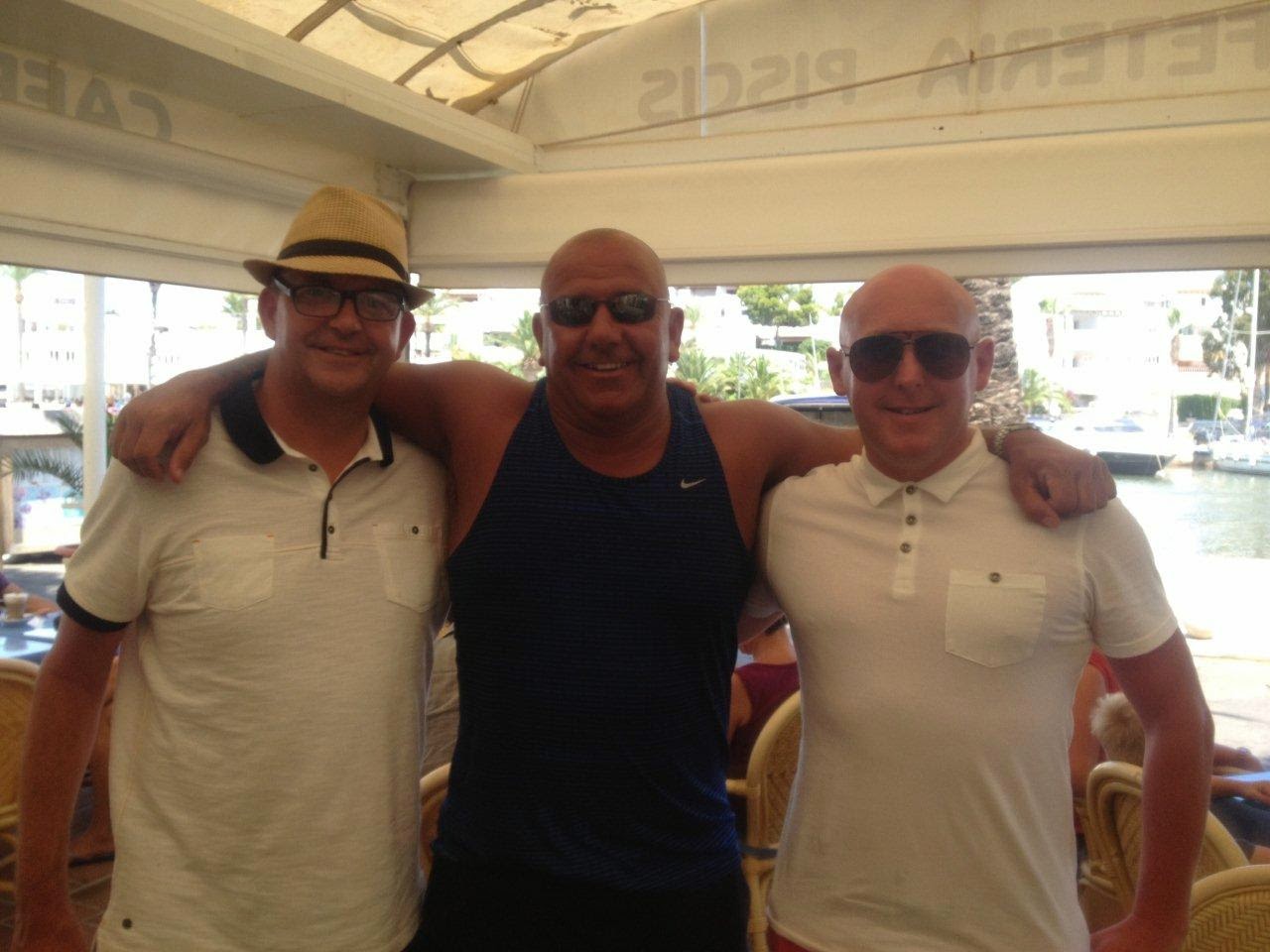 A rather tetchy 'Skipper' is on board this evening - he's collecting his GCES from school in the morning, so is a tad anxious. He's banished to the back seat and told that Capital FM and their six records played a day will not form part of our short journey. 'The Taxman' makes a welcome return after 6 months on the bench. I've missed his moaning and groaning about Billy Davies and Nottingham Forest.

Bulwell play at Basford United's Greenwich Avenue ground. It's £3 on the gate, including a programme and free entrance for under 16s. Basford United are the big money men of the Midland Alliance. Plenty of dollar has gone into sprucing up the ground. I'm taken aback at the quality of the pitch - you could play crown green bowls on it. It's hardly surprising though, when you have a qualified groundsman like Neil Swift at the helm.

I love nights like this, when all the local characters congregate at a game. The roll call is impressive: Malc and Kev the groundhoppers, Big Glenn on a spying mission from Bilborough Pelican and John Harris from Priory Celtic are celebrities amongst a crowd that will swell to 60 (head-count). 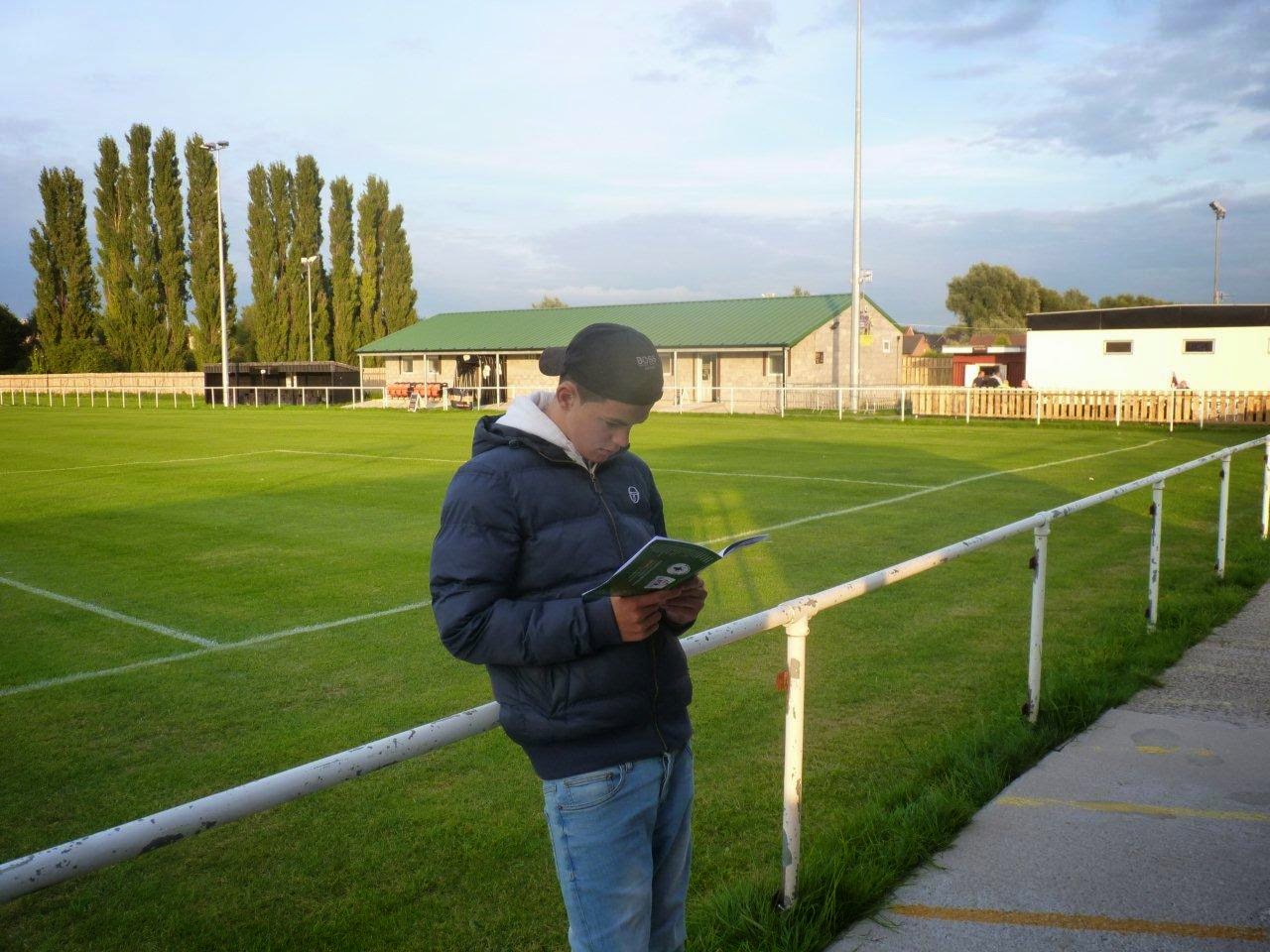 Clifton start the game like a house on fire. Jake Richardson bosses it at the heart of defence and joins in attacks, Ben Richardson has a terrific touch and technique, whilst winger Connor Hardy works the full back. They're ahead on two minutes after a mix-up at the back. They are wasteful in the final third: Gill and Hardy spurn chances, whilst Danny Johnson's delightful chip comes back off the woodwork.

An elderly Scottish chap is running the line on our side of the ground. Tosh and Steve will engage in some banter with him as they're both fluent in Scottish.

Tosh is called into action with the smelling salts for a dazed 'Banno.' Terry roars with laughter at the theatrics. All this for £3. It's better value than that ham and cheese sandwich. There's been action at both ends, with the unfortunate Dwayne Soar, of Bulwell, breaking his nose after colliding with his own player. There's been some brilliant swearing throughout the evening, as the excellent young referee blows for half-time. Bulwell shade it by 79 swear words to Clifton's 78. 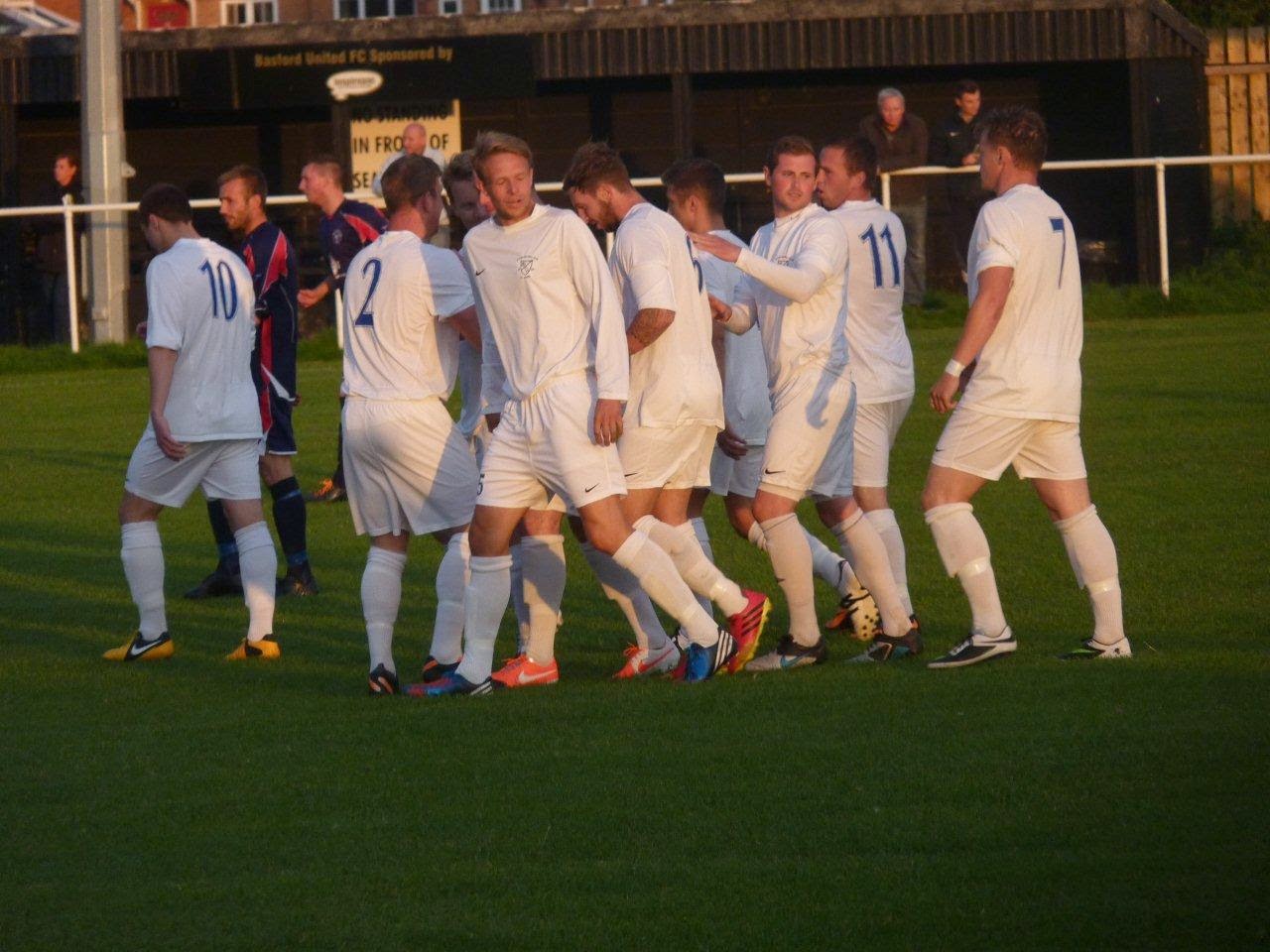 I bump into Swifty at the break; he delivers the most devastating news of the evening: the Co-op on Strelley Road is closing, those bastards Asda have bought it. I will never wear my George underpants again. The Bulwell No.8 wanders out the changing room for a crafty fag, a bit like Wilshere does at The Emirates.

'The Skipper' is refuelled with a tray of chips smothered in tommy ketchup - he'll be choking on them if he doesn't pass his O' Levels tomorrow. I don't know what Terry has put in Bulwell's tea, but they are a different proposition now. They work the wings, particularly the right flank, where gaps appear following a Clifton double substitution. They equalise at the death following a beautifully flighted cross from Jake Fisher on the right.

The referee has already indicated to his two officials that time is up. Finley the rabbit will be doing the moonwalk and bunny hops in his run. Eight long, barren years of crap non league tips in association with Sainsbury's are about to come to an end. I ring up Sainsbury's to order a bag of carrots as a reward, just as Felix Hogg taps in the winner for Bulwell:

Man of the Match: The Referee (Sam Kane)
Posted by Sticky at 8:47 PM