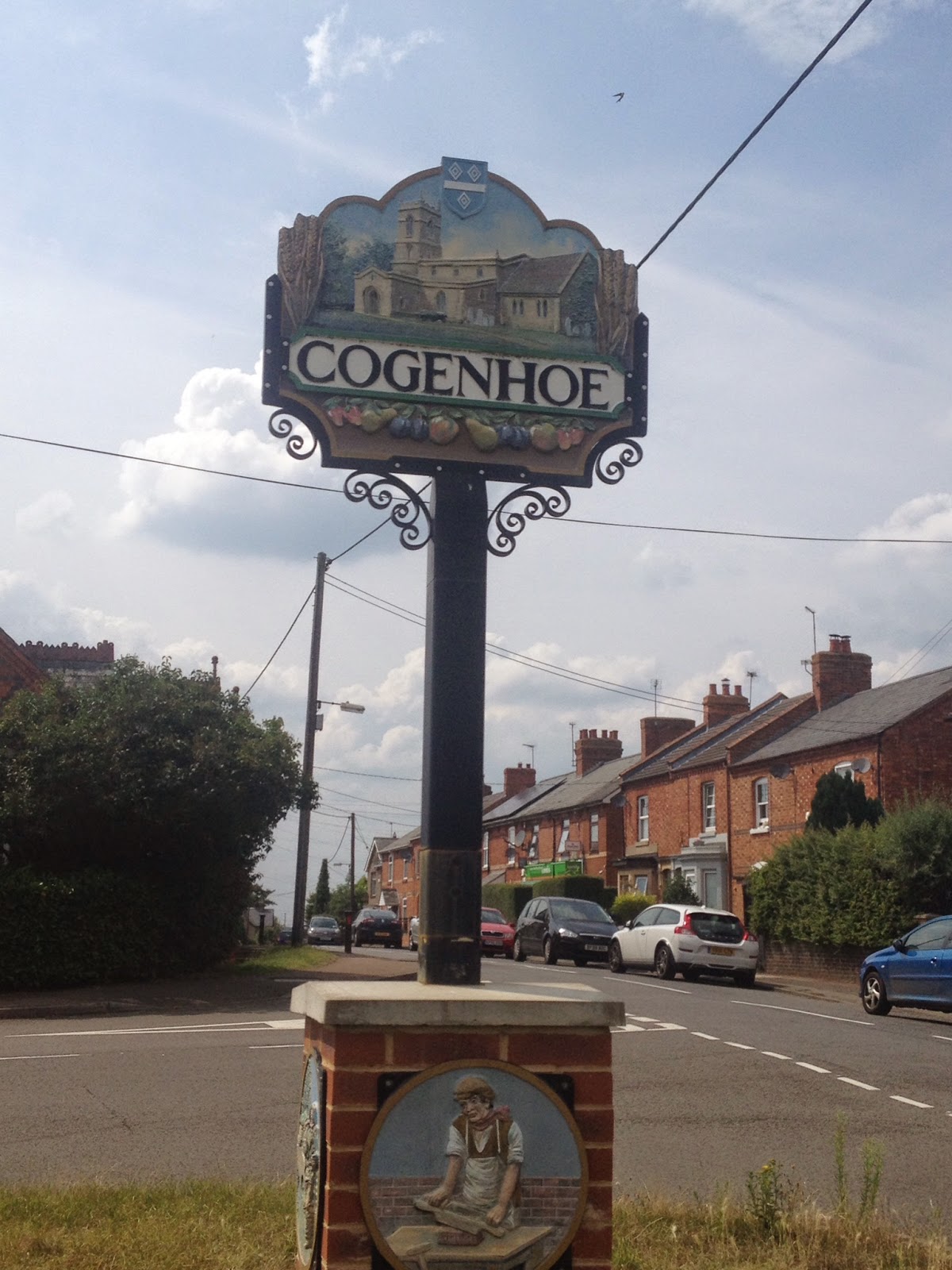 It's Thursday July 10th. I'm piloting the 'Rolls Royce'  through the picturesque village of Widmerpool in south Nottinghamshire.  Buried in the churchyard of St Peter's is the former assistant manager of Nottingham Forest, Peter Taylor. He died in the Majorcan resort of Cala Millor, where I'm off on my hols in a few weeks. I haven't got time to pay my respects right now, as I'm picking up Big Bear Baker, the Mayor of London and Mad Dog from Willoughby.

We jump on a bus to Trent Bridge; it's the second day of the First Test v India. It's the usual roll call in the Southbank Bar.  We bolt down a big breakfast; with a pot of coffee and not real ale. Prime seats are taken in the middle section of the Radcliffe Road End .

If only the cricket was as good as the banter. England won't bowl at the stumps and India won't put out the rod. We sink a few in the NFFC Supporters' Club at lunch. The most exciting part of the day is when India lose a flurry of wickets. The last wicket stand is painstaking and productive. We get to see England bat for an hour before piling into the Larwood and Voce and the Stratford Haven for some post match real ales. I stumble into a taxi with Barthez at nine bells. I've work in the morning. I can't be hanging. 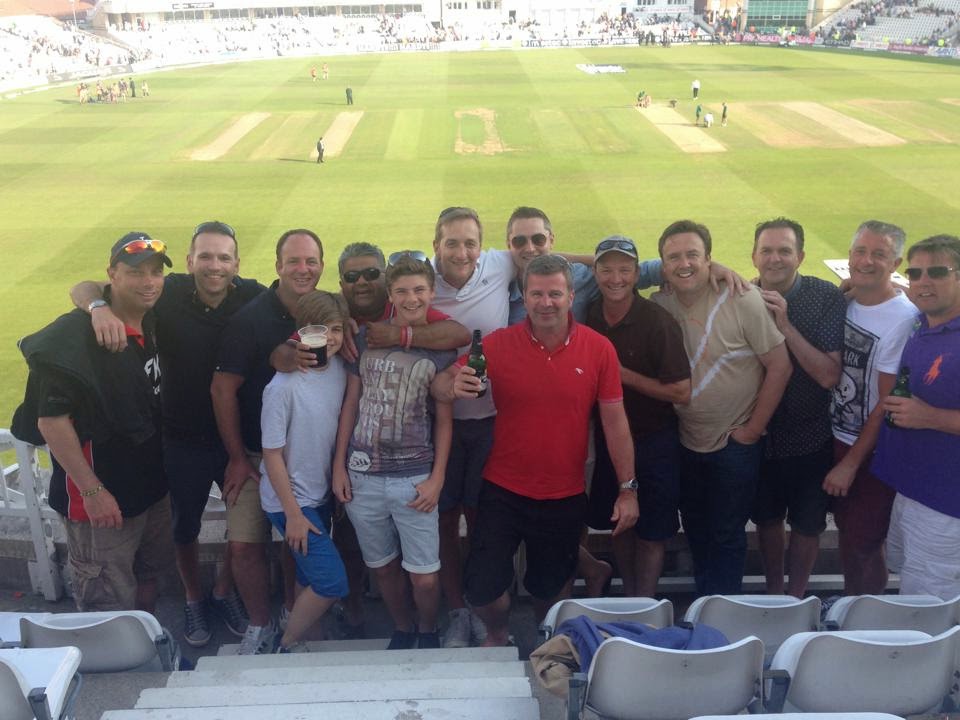 It's been an eventful few months since my last groundhop. I've lots to share with you all: a new job, retirement from youth football and a real ale trail in Nottingham. I'd been looking at a game the previous weekend. Potential fixtures fell by the wayside as teams either double-booked fixtures or failed to raise a team. Thorne Colliery and Winsford United will have to wait until later in the season.

It's the usual drill on Friday evening. I sit on the patio, sinking a bottle of Beaujolais, kindly bought by a parent from the team I used to run. I watch the sunset, chuckling away at the endless anecdotes in Danny Baker's 'Going to Sea in a Sieve.'

I'm dispatched down the garden early doors on Saturday morning. There's lots of chopping, huffing and puffing. I have a quick wash. What the hell is the theme tune of Eastenders blaring out the bedroom door of 'The Skipper' for ? The lazy sod is watching it on catch-up. 'The Skipper' is making his debut for Clifton All-Whites Ressies. I drop him off at the ground and wish him good luck. I hook up with Phil as we take the familiar route down the M1 South. 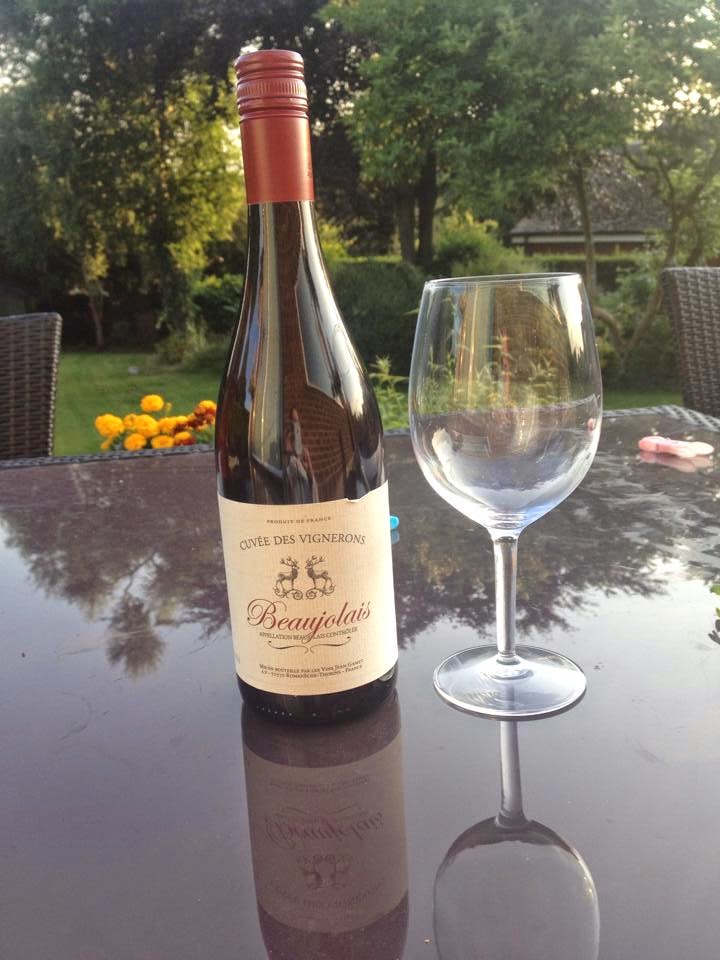 I love the Stag's Head at Great Doddington. The village has some beautiful stone buildings, decorated with glorious hanging baskets.  I enjoy a refreshing pint of Kronenbourg 1664 and a brie and bacon ciabatta, whilst basking in the lunchtime sunshine.

The village of Cogenhoe (pronounced Cook-nuh) lies 5 miles east of Northampton. It has a population of 1500. Blue Peter presenter Peter Purves once lived in the Old Rectory in the village. I never knew he had it off with Valerie Singleton - a Blue Peter badge for that one kid.

It's all kicking off near their Compton Park complex. The village fete is taking place today, with a car boot on Sunday. It's busy in the car park as there is also a cricket match in play. 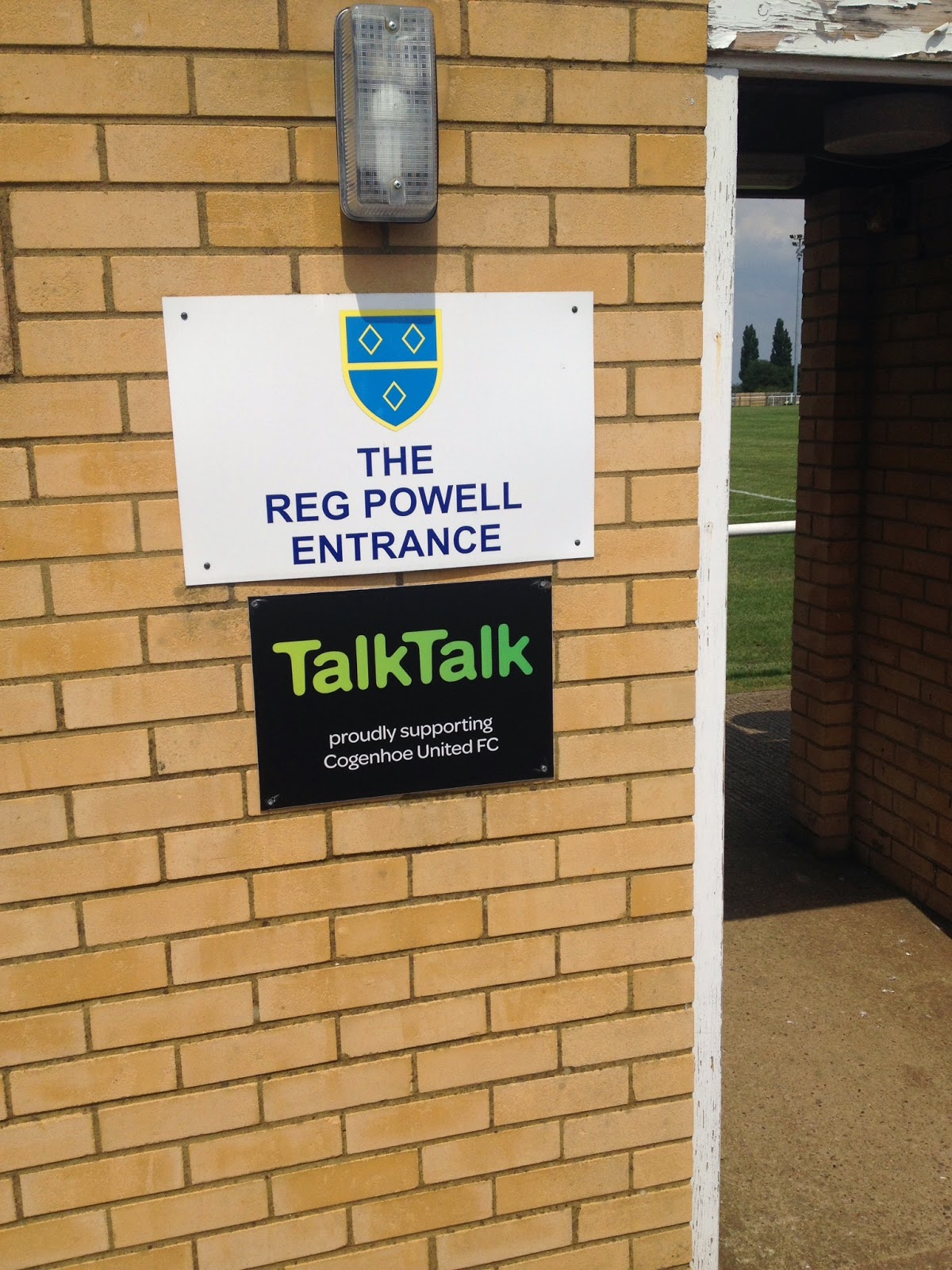 It's a rather pricey £6 on the gate. The programme is £1 and is sadly without squad names or player profiles. We are treated to seven pages of United Counties League news, which is copied and pasted from Press releases. I should be okay for a signal as a Talk Talk phone mast is fitted to one of the floodlight pylons.

It's a tidy enough ground. I prefer them to be in the heart of the community, like they are in the old mining towns. The cricket match next door provides some noise and cheers. A batsman is dismissed; a fielder pipes up with the Billy Smart's Circus theme tune.

I've no idea if this is the Histon first team, as they look a little fresh-faced and young. The under 21s had played a little earlier. I've always admired Histon who are also a village team. I'm a big fan of their former striker Dan Holman, who signed for Colchester United  on Friday from Braintree Town. 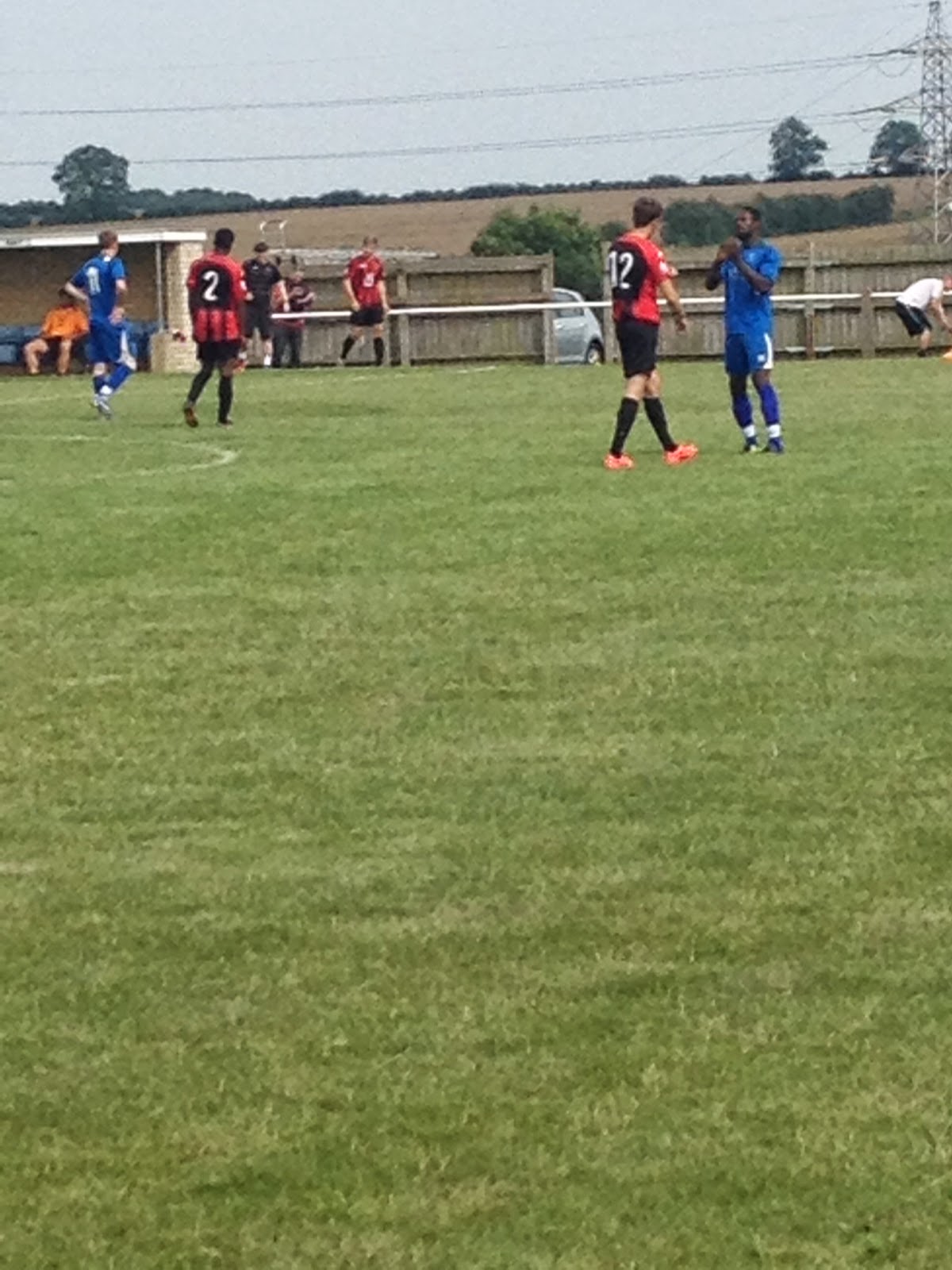 Looking at the size of the Cogenhoe team I can't see them lasting much longer than an hour in this baking heat. The pitch is well manicured and in perfect nick. Histon are managed by Brian Page, who I know has done very well at youth level for the Club. It's great to see him given a chance with the first team. Not sure about his choice of headgear today - he wears a flat cap. I thought it was the 70s Irish singer-songwriter Gilbert O'Sullivan for a moment.

There's no pattern to the game in its early stages until Histon striker Franklin Mensah lampoons a shot over the 'keeper into the roof of the net. The youngsters gain confidence and are 4-0 up by the break, with one or two smart finishes.

Cogenhoe boss Andy Marks tells his players to get tighter to the two runners in midfield who are bossing the game. I give 'The Skipper' a call; he's as happy as Larry with a 4-0 victory over Newark Town stiffs. The second half is a non event. Cogenhoe manage to bag one, a further four from the Stutes gives Sticky Palms a good start on the goal front this season.
Posted by Sticky at 8:40 PM