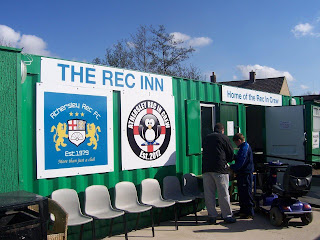 It’s Sunday evening. I decide to burn off my Sunday roast dinner and Stella Artois. I stroll down the jitty, past Sainsbury’s and up Nottingham Road. To my left are black railings leading to the Keyworth Rectory Playing Fields. I glance at the War Memorial as I sidle up to the entrance.

It’s a venue where I’ve chugged up that unforgiving bloody hill and bowled over after over of long hops for nearly 20 years. I stare towards the playing square. The Club is two hundred years old in 2015. They’ve upped sticks and moved to a safer environment on the edge of the village. The wires have been removed and the wicket is grassed over. I feel sad and emotional as I think about the fun I’ve had up here over the years. Maybe my two boys can rediscover their zest for the game and play for the Club that their Dad is so proud to be associated with. 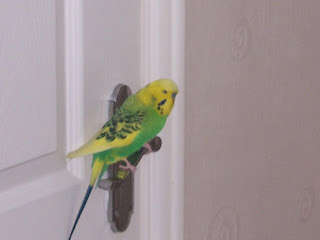 There’s a pleasant start to the weekend with a couple of pints of the guest ale at The Plough in Normanton-on-the-Wolds. I follow the Midland Youth Cup final with interest. My boss at Notts County, Mick Leonard, is taking the team this evening. I scour my Twitter timeline for the latest score. We go on to lose 4-2 after extra time, having played a lengthy spell with ten men. I note that 16 year old Gino Kelleher is the Pies star man.

I sleep soundly thanks to a couple of large glasses of Rioja reserve. Mrs P makes a startling admission at the breakfast table. As an eight year old, she once wrote to Jimmy Savile to see if he could fix it for her to be on the Krypton Factor assault course. It’s a skeleton that she has kept in the cupboard for over 35 years.

I check the headlines on the BBC Football website. News is emerging that Hereford United’s players have been told by text that there’ll be no pay packet for April. Murphy Palmer, my green and canary budgie doesn’t seem too concerned. He sinks his beak Suarez style into my ear lobe. He’s odds-on favourite for Gold at the Budgie Pecking Event in Rio 2016. 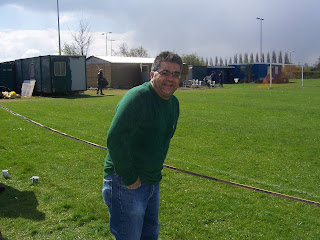 I drive up to the village. Sandie Shaw’s 1965 hit ‘Always Something There to Remind Me’ is being played on Radio Nottingham. I grab a bacon and egg baguette at Canterbury’s deli on Main Street. It’s no Roy and Hayley’s Cafe – it serves posh nosh and is the real deal.

I head down to the Lenton Lane area of Nottingham to view a game with my boss Mick, who appears pretty chipper despite the cup loss. Two of the top sides at under 15 level in the Midlands battle it out in a cup tie. We’re approached by a dead ringer for Terry Hurlock, to ask if we have permission to be on the ground. He appears miffed that we’ve actually been invited down by the manager of the home team.

I bump into Nottingham Forest diehard fan Jitz Jani. We discuss the opening day of the Nottinghamshire Cricket Premier League season, as hailstones fall from the darkening skies. It’s time to head up to South Yorkshire. I cruise up the M1. I slip on a CD. It’s the 1982 album ‘New Gold Dream’ by Simple Minds. ‘Someone, Somewhere in Summertime’ is the stand-out track. 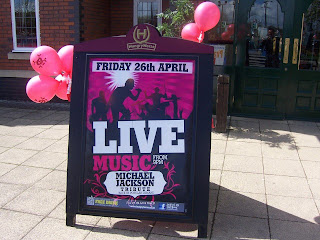 Expectant Hull City fans congregate in pub car parks all over the town, before their big clash at Oakwell. Police keep a watchful eye on the ‘Hull City Ultras.’ I stumble across a Hungry Horse pub on the outskirts of Barnsley town centre, next to an Aldi supermarket and car dealership.

I have a chuckle at the advertisement for the Michael Jackson tribute act that was on the previous evening. Two old lasses are shuffling towards the door: “Did you go to the ‘Michael Jackson’ concert last night ladies?” enquires The Groundhopper. “Nay lad” remarks one, as they Moonwalk their way to the bar.

I settle for a pint of Stella and a southern fried chicken sandwich. World Championship snooker is on the pub TV sets. The Sat Nav has had a wobble in the middle of what was once a National Coal Board pit estate. A young girl waves her arms in the general direction of Sheerien Park on Ollerton Road. 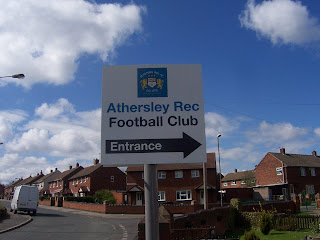 I clock a sign for ‘The Rec’ and turn right up a narrow driveway. It’s £4 on the gate. The programme is £1.50 and good value. I’m gobsmacked to read that former WBA and Birmingham City forward, Geoff Horsfield has bought the 60 year lease to the ground. What a top lad. It’s just about the most heart-warming football story I’ve read this season. It’s allowed a community to have a hub for their society.

The DJ reels off three records in a row from Cornershop, Erasure and The Cult. I’ve already fell in love with the place. The ground is fully railed with wooden panels round three sides of the ground, with metal fencing at the far end of the ground. There are two stands, one of which has black, white & brown tip-up seats. 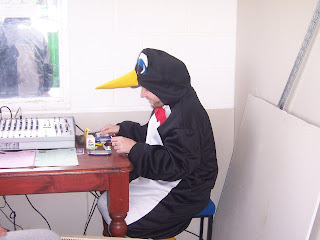 There’s a Club Shop, Social Club and Snack Bar. I stick my head into where the PA man is spinning his toons to congratulate him on his choice of music. He’s dressed up in a penguin suit.

The teams, somewhat bizarrely walk out to the theme tune from ITV’s The Bill. Athersley, sporting Newcastle and Notts County colours, require just one point to gain promotion to the NCEL Premier League.

Pontefract Collieries and Sticky Palms have previous. Their ‘Management’ behaved appallingly following a 3-0 drubbing at Worsbrough Bridge. Six ‘penguins’ are stood behind the goal Athersley are attacking. They are banging two sets of drums. Ringo Starr won’t be having any sleepless nights. I take a gentle stroll around the ground. There are 14 hoodies, 12 flat cappers and 10 bobble hat-wearers. 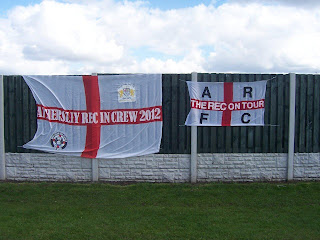 A ball is launched out of play, Sticky Palms outstretched foot cushions the ball; it’s flicked into the welcoming arms of a youngster close by. A better first touch you won’t see today. Collieries play with a lot more heart than on my last viewing. They have a goal chalked off for a foul on the ‘keeper.

The game is nervous, fraught and tense. Athersley play without fluidity. They have a succession of corners and have a stonewall penalty turned down. It’s 0-0 at the break with little sign of a goal. Regular readers will know that Sticky doesn’t do 0-0s.

‘The Rec’ DJ continues his good form at the break. ‘All Together Now’ by The Farm and ‘Hush’ by Kula Shaker, comfortably win this guy Non League DJ of the Year. There’s a notice in the wooden green-painted ‘Gents’ of the consequences of taking and dealing drugs. I grab a coffee and position myself next the ‘Ponte Carlo’ dugout to see if them pair are misbehaving. It’s not long before they are haranguing the officials. The ref is “weak” They chew on the lino’s ear more than Murphy the budgie does on mine. 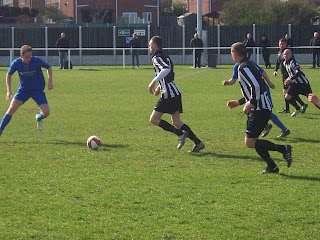 Thankfully, Collieries impress. They are quick on the break and not short on ideas. With 18 minutes remaining they are awarded a controversial penalty on the linesman’s say so. It’s comfortably dispatched by Andy Catton. A guy behind the goal in a copper-coloured hoodie has lost the plot. His cheeks are the colour of his top. I seriously worry about the health and sanity of the Athersley manager, who is still spitting feathers following the spot kick.

Athersley huff and puff but can find no way past impressive Ponte ‘keeper Sam Andrew. The day ends happily though with rivals Cleethorpes slipping up at Clipstone MW.

Man of the Match: Sam Andrew

Blimey ... last I heard he was playing guitar with Janis Joplin ...

I wasn't at this game, but this 'previous' you talk of stems from when Athersley played Ponte on a Tuesday night in the league cup. The Rec had 3 players sent off that night for potential leg breaker tackles. One of their fans also punched one of our players as they were walking off the game. It's the only ground I know of where FIVE stewards are required for most games.

The 'previous' I spoke about was versus Worsbrough Bridge, where your two managers were a bloody disgrace to the game. Found 'the Rec' to be a friendly place. Not one bad tackle in the game. Look forward to an undercover visit to Ponte Carlo.

It's very easy to find out any topic on net as compared to textbooks, as I found this article at this site.

I have read so many content about the blogger lovers but this piece of
writing is truly a fastidious piece of writing, keep it up.