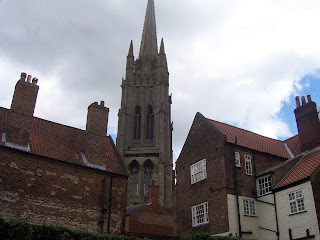 I climb out of the car after another miserable week at work. It’ll be nice to unwind with a few beers, whilst listening to the radio and reading the Nottingham Post. I unlock the back door and step into the kitchen. There’s one of hell of a commotion in the lounge. Murphy Palmer, Keyworth’s No.1 budgie, is squawking and screeching.

I dart into the lounge to investigate the goings on. Murphy is perched on top of the TV set. Circling and dive-bombing him at every opportunity is an angry wasp. I rummage around in the magazine rack and unearth an old copy of When Saturday Comes. I waft the magazine aimlessly at the striped insect. 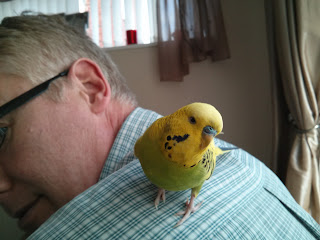 Bloody hell, it’s turned on me now. I scarper upstairs to fetch re-enforcements. Sticky jnr doesn’t faff about. One whack on the head with a copy of Nuts has done for him –the wasp not junior. Murphy sticks the beak in, just for good measure.

The football season is finally winding down. I’ve only managed 20 odd new grounds this season. I make a couple of re-visits during the week. I see a nine goal thriller between Ruddington and Attenborough at a glorious sun-kissed Elms Park on Tuesday evening, with the Boys Brigade band belting out some marching tunes. Sticky junior turns on the style at Tollerton’s Open Space on Thursday. The village idiots are out in force. 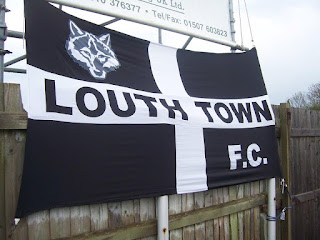 I can’t wait for the summer break. I’m footballed-out folks. Next season could be even worse, with the possibility of running two sides. I chillax on the sofa on Friday night with a bottle of Cote Du Rhone for company, watching the fag end of Sheffield Utd v Yeovil in the League One play-off. Mrs P is in ‘Bread and Lard Island’ with the girls.

It’s a wasted Saturday morning. I nip to a nearby old pit village to view a game, but the ground is deserted. I cruise down to West Bridgford’s Regatta Way complex. The A52 is backing up to the island at Gamston. In two hours time Forest and Leicester will be locking horns at The City Ground.

Danny Baker tells an interesting tale on his radio show on why flawed genius Paul Gascoigne chose Tottenham Hotspur over Everton in 1988. Apparently Spurs promised to buy his Mum and Dad a property in the affluent Newcastle suburb of Jesmond. Geordie comedian Ross Noble is Baker’s studio guest. He mentions how he’s sick and tired with folk confusing him for Neil Oliver, the presenter of the BBC2 programme Coast. 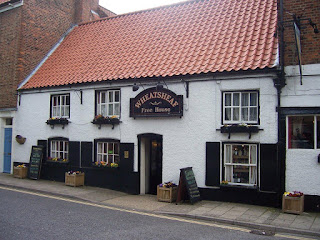 The A46 to Lincoln is a breeze these days, particularly since the opening of the new section from Widmerpool to Newark. Long gone are the one hour journeys to Sincil Bank in my Vauxhall Viva.

I have a little chuckle on the way. I managed to upset Pontefract Collieries again the other week. An official from the Club called me a “tossa” on their Facebook page. They’re a great set of lads up there; salt of the earth. I can’t wait for my undercover visit to the White Rose Stadium.

I skirt round the edge of Lincoln city centre, past endless, soulless industrial estates, with their Frankie and Benny’s and child-friendly pubs. I avoid the NFFC game on the radio like the plague. Junior has already texted in to say Simon Cox has bagged an early goal. 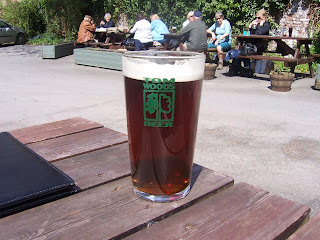 The Rolls Royce chugs into Westgate, surrounded by its 17th Century brick buildings. The skyline is dominated by St James Church; the spire is 295 feet tall. Louth is a market town within the East Lindsey district of Lincolnshire. It is known as ‘the capital of the Lincolnshire Wolds.’ On May 29th 1920 a flood in the town caused 23 deaths. Cadwell Park motor racing circuit is four miles south of the town.

In 1969 Tory candidate Jeffrey Archer was elected MP for the constituency of Louth. The Poet Laureate, Alfred Lord Tennyson was born in nearby Somersby. Comedian Roy ‘Chubby’ Brown and actor Jim Broadbent are said to live in properties close to the town.

I clock the Wheatsheaf pub that I’d earlier pencilled in whilst flicking through the Good Pub Guide. The place is snided out with folk. It has three low-beamed rooms with wooden dining tables at the rear of the pub. I shout up a pint of Tom Wood’s Bomber County real ale. I’m told there’s a half an hour wait for food. I’m Hank Marvin folks, a bacon and brie baguette will go down a treat. An hour later, and despite several polite requests, there’s bugger all sign of the snap. An angry Groundhopper has a few waitresses scattering for the kitchen. 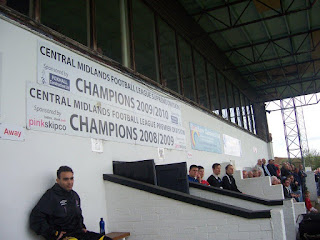 I take a few snaps of the towering church spire, much to the amusement of the pub customers who bask in the lunchtime sunshine. A heavy, sharp, short shower disperses the punters.

Within minutes I’m pulling up a tight, narrow driveway, with my vehicle coming to rest in a pea-gravelled car park. It’s £4 on the turnstile and £1 for a programme. I buy a strip of raffle tickets.

Running along the nearest touchline is the Bingo and Social Club. If you can be bothered to climb the stairs you are able to watch the football from behind the glass windows. Below the Club are five concrete steps where you can view the game. The other three sides of Park Avenue are open, with picket fencing erected around three quarters of the ground. 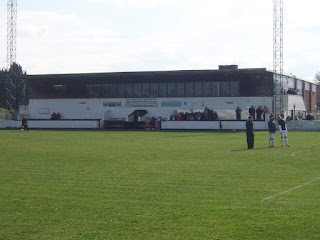 That Tom Wood’s Bomber ale has proper done for me folks. I was going nip behind some nettles to the rear of the training ground for a pee, but a couple of kids scupper any chance of that as they start playing three-and-in. A friendly official lets me use a Ladies toilet on the far side of the ground.

A groundhopper in full ‘hopper’ regalia tucks into some homemade sandwiches from out of a Tupperware box. A guy from Holland, who talks like Martin Jol, strikes up a conversation.

The White Wolves play in a Real Madrid replica strip, with the visitors from South Yorkshire sporting a similar kit to the Tigers of Hull. Louth have been playing catch-up recently. They rest a few weary legs for their League Cup final to be held in a few days time. Former Grimsby Town, Burton Albion and Boston United striker Daryl Clare is manager of Louth. The linesman calls a wrong decision on 5 minutes. He feels the full wrath of Clare’s tongue: “You might be on your jollies lino, but we’re not.” You have to admire his professionalism, with just third place to play for. 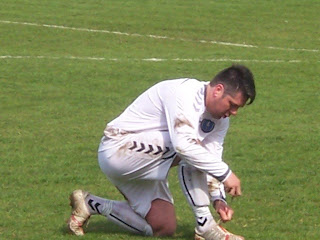 Carl Martin had earlier given Louth the lead on three minutes, finishing from close range. The visitors offer very little. One or two of their players have a turn of pace, but their decision-making is poor.

Sticky junior has phoned-in; he’s disappointed with the Tricky Trees 3-2 reverse. He claims to have hooked up with the Forest Executive Crew, who are en-route up London Road to Nottingham train station to wave off the Baby Squad from Leicester. Uncle Trumpy Bolton has also been in touch from Chepstow, where he’s celebrating a Foxes win with a skinful of cider. The raffle numbers are announced. I’m three off a win.

The second half follows a familiar pattern with Louth well on top. Young Nick Manders spins his marker and plays in substitute Jonathan Walters, who finishes with a low drilled drive into the bottom corner of the net.

It all has an end of season feel about it; a bit like this blog. See you all in July folks.