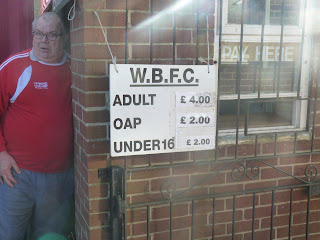 It’s Wednesday evening and I’m relaxing on the sofa watch a gripping Champions League quarter final first leg between Real Madrid and Manchester United. I hear the key inserted into the lock of the front door. Mrs P is back from the Gala Bingo in Beeston.

The kids come racing down the stairs. Mrs P raises a clenched fist. I didn’t think the Ronaldo header was that good. A wad of notes are waved in my direction. The £300 jackpot has been won. Sticky jnr gets £10 for passing his plumbing exam, ‘The Skipper’ gets a crisp £10 note for a good school report, Murphy is promised a few sprigs of millet spray and Finley a bag of Wag rabbit food. The rest is put towards her weekend away with the girls in Barcelona.

Poor old Groundhopper gets Jack diddlysquat. Not a sausage readers. £10 would have gained me entry to two non league games and also bagged me a couple programmes. It’s a bloody outrage. 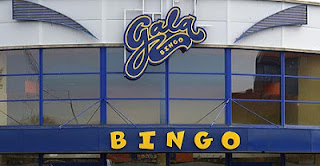 Valentine’s Day is put back 24 hours. Mrs P snaps up an M&S ‘Meal Deal’ (out of the winnings). A medium rare sirloin steak is washed down with a bottle of Rioja. I rise early on Saturday morning. A bowl of muesli is accompanied by Madonna’s 1986 hit ‘Vogue’ on the 6Music ‘Breakfast Show.’

An offer of a stroll down Central Avenue, in West Bridgford, is flatly refused by Mrs P; she’s off to town with her mum. I give the ‘Rolls Royce’ a good old clean and valet. By midday I’m on the Nottingham ring road heading towards the M1.

Mark Pougatch is presenting Five Live Sport from Luton’s Kenilworth Road. The Hatters livewire winger, Andre Gray, will be asking questions of the Millwall defence with his raw pace and energy. The boy was a steal for £25k from Hinckley United. I tipped off a few clubs about him, but they’d rather buy 32 year old journeymen on two year contracts. 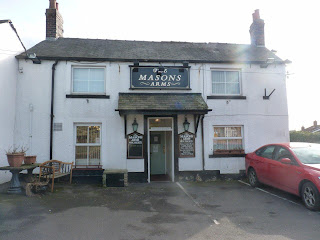 I’ve scoured the 2013 edition of the Good Beer Guide for a decent real ale house just off the motorway. I exit at Junction 35 and I’m soon parked up in the village of Thorpe Hesley just outside Rotherham.

I’m just about to open the front door of the Masons, when I notice a missed call from blog legend ‘Trumpy Bolton.’ The great man is propping up the bar in the ‘Stage’ on Upper Parliament Street in Nottingham. It used to be called ‘Fat Larry’s’ by the locals, as it was once owned by former Nottingham Forest defender Larry Lloyd. We firm up details for our visit to Colchester United on Good Friday.

The landlord at the Masons is right old grumpy bugger. I order a pint of Caledonian’s ‘Over the Bar’ and choose sausage, bacon, egg and chips off the menu, in an attempt to soak up that Rioja. The landlady is no Carol Vorderman, though folks, as it takes her quite a few minutes to add up £4.50 and £2.70 on a notepad. 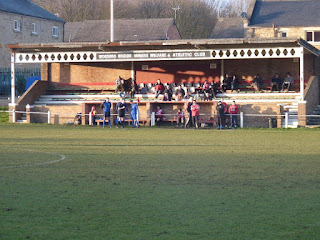 They’re serious about their food in this neck of the woods though. I’m asked do I want my bacon plain, smokey and crispy.

The pub is low-beamed, dimly lit and has one of those patterned carpets associated with all Berni Inns in the 70s. A classic Walker Brothers track ‘Take it Easy’ is piped out of the speakers. ‘Shifty Edwards’ at work loves that track. There’s about a dozen people congregated in the bar. I’m comfortably the youngest by about 20 years. It is indeed God’s Waiting Room.

I can’t fault the snap though folks. The helpings are generous and are accompanied by a red rose left over from the previous evening (14th). A bloke comes out the toilets. He’s sporting huge sideburns and looks like the lead singer out of the Flying Pickets. 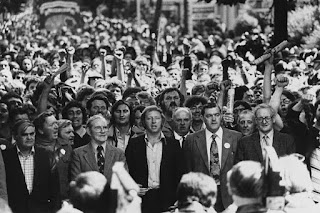 I’m soon sweeping down the A61 into the village of Worsbrough Bridge. Worsbrough is an area two miles south of Barnsley with a population just shy of 10,000. It’s built on a valley. It has the Trans-Pennine Trail, a mill, a country park and canal.

The football club were founded in 1923. Famous players to worn the red colours of the Briggers include: former Republic of Ireland manager and a personal friend of ‘Gangsta’, Mick McCarthy and ex Birmingham and WBA striker Geoff Horsfield.

Worsbrough’s most famous son is former National Union of Mineworkers President, Arthur Scargill. He led the union during the Miners’ strike 1984-85. 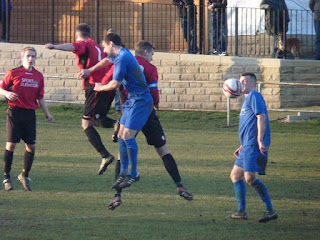 The car park is chock-a-block I park on a side street just spitting distance (well El Hadji Diouf would manage it) from their Park Road ground. It’s £4 on the gate and £1 for a very good value programme. It’s a cracking effort by programme editor Charlie Wyatt.

I get chatting to a jolly, bubbly old boy, who’s manning the gate. He tells me that the ground was covered in snow on Wednesday.

The ground is outstanding. I’m taken aback with the views and character of the place. It has a ground-share with the local cricket club. There’s a new brick built changing room in the top right hand corner of the ground and a lovely old rickety stand running along the near touchline. On the far side is the covered River Terrace. 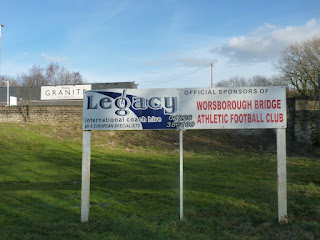 Today’s visitors are Pontefract from West Yorkshire. It’s a historic market town with a population of 28,000. It is famous for its liquorice factories. Locals comically refer to the town as ‘Ponte Carlo.’

The sun is shining brightly in blue-painted skies as referee Mr D Guest whistles for the off. I’ve positioned myself in the beautiful old stand behind the dugouts. It takes a full two minutes before the Pontefract bench begin to irritate me.

‘Liner’ on the far side gets dog’s abuse. You’d need a pair of binoculars to see whether the decisions were correct or not. The pair of them bore the pants off me. They barely make a coaching point and their team can’t string two passes together. They are bloody awful. 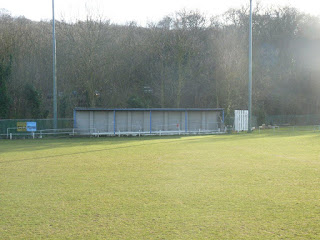 Worsbrough take the lead on 11 minutes. Former Ossett Town forward Lee Garside clouts a 25 yard free-kick which almost breaks the back of the net. Another goal is chalked off for the Bridge for pushing, as the visitors continue to complain to all and sundry.

I bump into a ‘Dirty Dirty Leeds’ fan from ‘Ponte Carlo’ in the Gents at the break. He’s curious to know why someone from Nottingham would travel so far to watch a non-league game.

Now that sun has dropped, it’s gone decidedly chilly. I go for a warm in the tea bar. I thought I’d walked into a church hall. A piping hot coffee is served at the hatch by a chatty lady. Trade is brisk. Tray after tray of chips and curry sauce are served up. There’s a flag sat in a wooden picture frame on the wall from the Barrow Branch of the NUM. 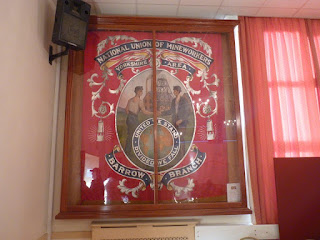 I couldn’t stand another 45 minutes of bellyaching from the Ponte bench. I stand on the opposite side of the ground. Ponte improve slightly. On the hour Bridge double their lead with a header from the impressive Adam Podmore. The game is over on 67 minutes with Garside getting a second with a fine header. The Briggers are playing a beautiful game and cleverly use the width of the pitch.

‘Motormouth’ from the Ponte bench has come on as a sub. He clearly talks a better game than he plays. He fluffs a one-on-one with the Bridge ‘keeper as ‘Colls’ create a late flurry of chances.

As I head out the ground I notice a distinct lack of flat-cappers and four-legged friends There’s just the one, a Heinz variety.

Man of the Match: Lee Garside
Posted by Sticky at 7:13 PM

A cracking read as always Sticky.

Excellent blog,Sticky.Will be following you in future.

Excellent read, like the part "It takes a full two minutes before the Pontefract bench begin to irritate me" after the Ponte bench give the official some abuse

Would it come as a surprise about one of the Ponte bench (manager) teaches PE at a local Barnsley School, so much for respect eh

Nice blog mate, as a Brigger myself I thoroughly enjoyed the reference to our wonderful cricket club.

Great read Groundhopper, love the reference to our wonderful cricket club too, scoreline was perfect