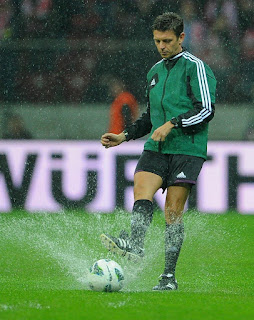 It’s late on Friday night in December 1975. Young Sticky Palms is fast-off in bed. I can hear the landline ringing out and my father fumbling around in the adjacent bedroom for the light switch. He stumbles towards his office; he is the East Midlands correspondent for the Daily Mirror.

It’s the biggest breaking-news story of the year and right on my Dad’s patch. The Daily Mirror news desk are reporting that fugitive, multiple murderer and armed robber, Donald Neilson, aka the ‘Black Panther’ has been arrested in the village of Rainworth in north Notts.

Neilson had kidnapped two policemen in their patrol car but had lost control of the vehicle outside The Junction Chip Shop in Rainworth. Unfortunately for Neilson, the afternoon shift of the local colliery had just swilled down a few pints at last orders in the Welfare, and were queuing up for a fish supper at the chippy. They had a mass pile-on the ‘Black Panther’, making it the most famous citizen’s arrest of all-time. 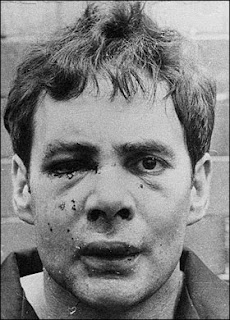 I walk passed the boardroom and head down the stairs towards the staff canteen. I’ve a pen and pencil on my person. I’m shitting bricks readers. For the last three weeks my life has been on hold. Sticky has been back to school.

In five minutes time I’ll be taking my PRINCE 2 project work examination. I’ve revised solidly day and night. I open up the paper and I’m horrified to see that the questions are written slightly differently to the exam simulator that I’ve been smashing over the last few days.

I’m invited into the boardroom, later in the day, to be informed by a senior manager that I’ve achieved a comfortable pass. I’m euphoric. It’s the first exam I’ve taken since I passed my referee’s paper 25 years ago. 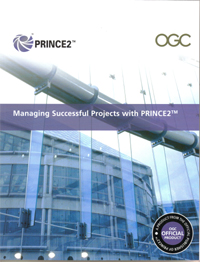 I’ve missed out on groundhopping the last few weekends to concentrate on coaching ‘The Skipper’s’ team. We’re performing above expectation in the Notts Youth League under 15 Division One. Every game is a cup final. Rival managers tap up players behind your back; some even inbox lads on Facebook, an action in my eyes that should receive a lifetime ban.

Today (Saturday) we are playing a local derby four miles away in an old coal mining village. The team in question have thumped us over the last two seasons. My lads rise to the occasion and play a beautiful game. We’re 4-3 down with time running out. We go 3-4-3 as a last throw of the dice.

The ball is played out to the left, our winger cuts inside and delivers a cross which evades all and sundry, with the ball finally nestling into the corner of the net. It’s a sweet moment for us all, as we grab a deserved point, in an epic game of football.

It’s Tuesday lunchtime, the day of the game. I check-in with ‘The Taxman’ to firm-up travelling arrangements for this evening. The big girls’ blouse has a runny nose and cries off. He’ll be sneaking a view of Poland v England in the World Cup qualifier. 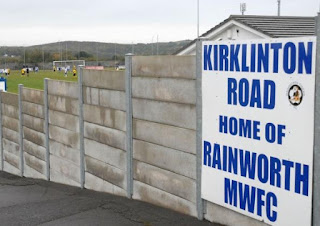 Mrs P has prepared a lamb hotpot – it knocks spots off Betty Turpin’s in the Rovers Return. There’s ample time to feed Murphy the budgie a sprig of millet, before wrapping myself up in four layers of clothing and heading north on my own, with just a bag of mixed fruit pastilles for company.

I switch Five Live on. They are interviewing some bleating ex US Defence General about the decision by the government not to extradite Scottish computer hacker Gary McKinnon. Suddenly it’s straight over to Alastair Bruce-Ball in Serbia who is covering the England Under 21 game.

The match has ended in turmoil, with violent scenes. Stuart Pearce’s assistant, Steve Wigley, has been hauled to the ground and assaulted, while Danny Rose has been subjected to racial abuse. Bruce-Ball reports that Rose has mimicked the actions of a monkey to the crowd. 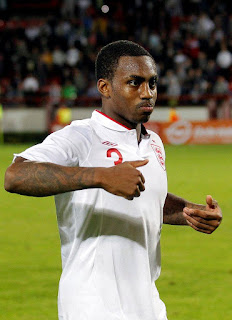 I’ve got raging toothache – actually my gums ache. I had two teeth extracted last week, and that area of my mouth is still heavily infected. The penicillin is kicking in. I could have tossed it off and stopped in to watch the match, but I really enjoy watching Kings Lynn Town.

Their owner, Buster Chapman, issued a rallying call to the town recently to get behind the Club, or face the consequences of budget cuts. Over a thousand folk turned up for the following game against bitter rivals Coalville Town.

Tensions were still simmering between the two clubs following a heated FA Vase semi-final a few years ago. Twenty Coalville fans were refused entry at the turnstile during the league game, with reports of punches thrown and a police presence in the tunnel. An enquiry is currently taking place.

I park the car on one of the old pit estates across the road from the Kirklington Road ground. There’s little time for a pint in the Welfare. It’s £7 to gain entry and £1 for an absolute corker of a programme, with a free team-sheet inserted. 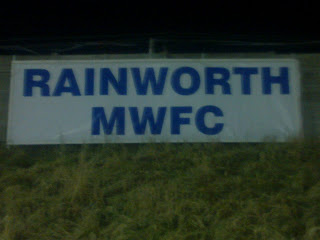 There’s a Sportsman’s Evening being advertised, with John Aldridge appearing at Rainworth Miners’ Welfare in November. There is nothing sporting about this individual, as supporters of Nottingham Forest will testify, when Aldridge mocked Brian Laws after the Forest defender scored an own goal in an FA Cup semi-final in 1989.

Two big lads from Norfolk are holding court with some other visiting fans. It’s like watching an episode of Ruth Rendell’s Inspector Wexford. I can’t understand a bloody word they are saying.

I position myself to the left of the Rainworth dugout. ‘Black Heart’ by London RnB band Stooshe is booming out the ground PA system. A text alert goes off. It’s a joke from The Comedian ‘The new Bond theme is being performed by Adele, a rare occasion when something starts when the fat lady sings.’

Apparently it’s teeming down with rain in Warsaw, with the game in serious doubt of being played. I have a little Muttley like snigger at the folk who have mocked me for venturing out this evening. 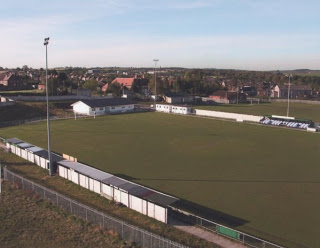 It’s a cracking game of football in the first period, with a good tempo and players efforts worthy of a goal or two. Rainworth play a neat and tidy game which belittles their lowly League position. The Linnets are more direct, knocking balls into the channels or targeting their big striker Russell Dunkley. Regular front man, Jason Turner is on his honeymoon.

The visitors are thwarted by impressive Wrens’ ‘keeper Joe McCormack, who also has a kick like a mule. Flicking through the programme and looking at the player profiles, Kings Lynn seem to have had an overall of their squad, since I last viewed them at Newport Pagnell. They have successfully raided Long Buckby’s UCL team from Northants.

I expect The Linnets to push on in the second half, but Rainworth have also been wasteful in front of goal. The Rainworth PA man is having a bit of a ‘Weston.’ He’s only gone and stuck on Tina Turner’s Greatest Hits – bloody hell Gordon. I think Alvin Stardust is No.1 in the charts in Mansfield.

Sticky Palms loves Linnets’ winger Steve Spriggs The wee man is off colour tonight; he’s not getting a sniff. There’s no marauding runs or whipped-in balls.

The second half is a classic, with four goals flying in during a 16 minute spell. Jared Holmes curls one in from the edge of the area. Kings Lynn reply through a deft header by Dan Quigley. Minutes later they take the lead with a thunderbolt from full back Jordan Yong. Karl Slack ensures honours are even with a smart finish on 69 minutes.

I’ve had a nice little natter with a group of Linnets’ fans I can understand. One travels to all the games from his home in Stafford. They admit their team aren’t on song this evening and that Rainworth are well worth the point.

Man of the Match: Joe McCormack

I am humbled and honoured to have a small mention in your review Sticky (aka Sheridan Poorly !)