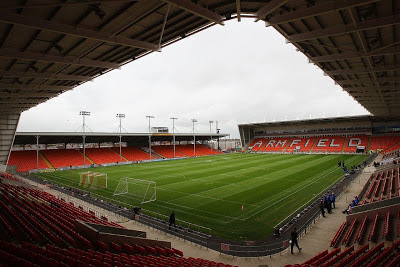 1974-2012. Aged 38. Its death has been the talk of Twitter. My old faithful friend Ceefax was finally laid to rest this week. My favourite pages included 302 (Football) 312 (Football in Brief) and 390 (Regional Sport). I used to spend Saturday afternoons, when the kids were bairns, slouched on the sofa repeatedly pressing the latest score buttons on my TV remote console.

Soccer Saturday, the internet and social networking have contributed towards its demise. My father, shortly before his death, became particularly bad-tempered one day, when punching in 199 for the sports headlines, the numbers just kept looping around and around. It took a phone-call to the BBC complaints department to resolve the issue.

It was on the coach journey back from Fleetwood that I noticed that Forest were to travel to the north-west again during the October half-term. Sticky jnr didn’t need asking twice. He’s well and truly hooked on watching Nottingham Forest FC. Blackpool’s Bloomfield Road ground is on my to-do list, as I home-in on completing ‘the 92.’ 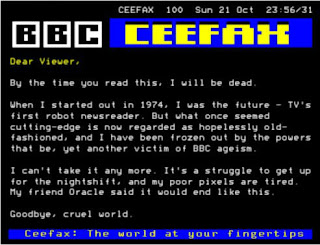 It’s Tuesday morning, the day of the game. Mrs P has gone swanning off shopping to Meadowhall, in Sheffield. I’m left to rustle up one of my legendary fry-ups for the kids. I crack the eggs into a sizzling pan. The fat is spitting more viciously than Leeds United’s El Hadji Diouf.

Fully fed and watered, I bundle Sticky jnr and ‘Chambo’ into the car and head off to Tollerton to pick up ‘Lil Louis.’ His Dad, JK, is away on business; I’ve promised to look after the wee man. We leave the ‘Rolls Royce’ in the Brian Clough car park and hop onto the No.2 supporters’ coach.

I’m comfortably the oldest person on here. It’s like spending the night at Bulwell Youth Club. Two seats are spare to the rear. A gang of 16 year old lads from Top Valley are bossing it on the back seat. There are reports circulating of lingering fog in the Blackpool area. Bloody hell, that mist is going to be hard to shift, if it rolls in from the Irish Sea. 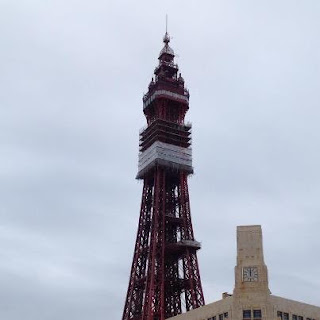 Despite the average age of the bus being about 18, the coach driver decides to stick on Gem 106. It’s one shit song after another. Bill Medley and Jennifer Warnes, Westlife and Phil Collins have the coach passengers keeping an eye on Sticky Palms for any suicidal tendencies. There’s a huge cheer in Stoke when we lose reception.

Sticky jnr is sat with his headphones on. He’s wolfed down a family-sized pack of Rowntree’s wine gums and is now flicking through the pictures in The Sun. There’s a brief toilet stop at Knutsford Services, so all the kids can re-fuel on testosterone.

The coach driver has been fiddling about with his radio again. Blackpool-born singer-guitarist, Robert Smith, of The Cure is belting out his 1983 hit ‘Love Cats.’ We pull into the car park at Bloomfield Road at just before 5pm. 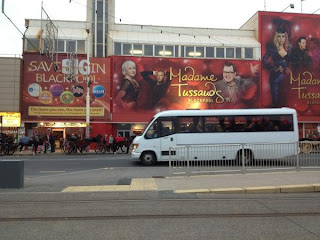 Sticky jnr and’Chambo’ are let loose on this historical seaside resort, which in its heyday was visited by over 17 million holiday-makers each year. Blackpool has a population of 140,000. It is well known for its Tower and Illuminations.

A few little-known facts about Blackpool include: In 1964, following a riot at a concert at the Empress Ballroom, the Rolling Stones were banned from playing in the town. This ban was not lifted until 44 years later in 2008. 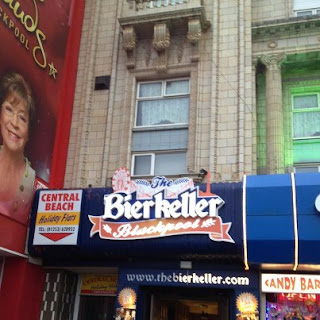 Former England cricketer, ‘Bodyline’ fast bowler, Harold Larwood, ran a sweet shop in Caunce Street in the town from 1946-1949, before emigrating to Australia.

We stroll a mile or so down the seafront, passed the Central Pier, Madame Tussauds, Coral Island, Yates’s Wine Lodge, North Pier, the Bier Keller and the Albert and Lion Wetherspoons pub. The sea is 40 metres out. Seagulls wade in the pools of water left by the tide. Apart from the Tower, it’s a fairly unremarkable and characterless place. Everyone looks so miserable and downcast. Mind you, two wins in the last eight games; I can hardly blame them.

We dive into the Captain’s Table for a fish n chip tea. The cod melts in your mouth. We bump into Sticky jnr opposite the Central Pier. He says he wants to live here, loves the place. I ask him if he’s been having a sniff of the barmaid’s apron. I watch the illuminations spring into action, before heading back up to the ground for the 8pm kick off. 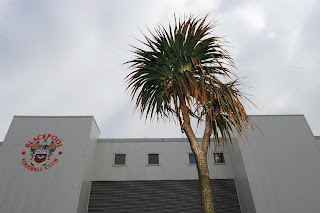 The away turnstile is tucked away in the corner of the ground. There’s no body search or aggressive stewardings; the welcome is warm, friendly and northern. It’s £25 for my match ticket and £3 for a glossy 80 page programme. We’re told we can take a pew wherever we want.

Blackpool were founded in 1887 and are nicknamed The Seasiders or The Tangerines. Recent well-known managers include: Stan Ternent, Simon Grayson, Sam Allardyce, Colin Hendry & Steve McMahon. Largest transfer paid is: £1,250,000 for DJ Campbell from Leicester City. Record transfer fee received is £7 million for Charlie Adam from Liverpool. Most League appearances made is by Jimmy Armfield (569).

Forest fans are pouring through the turnstile as Dave Clark Five’s 1964 hit ‘Glad it’s all Over’ rings around the ground. The teams emerge from the tunnel to Zoe Ball’s husband’s ‘Right Here, Right Now.’ 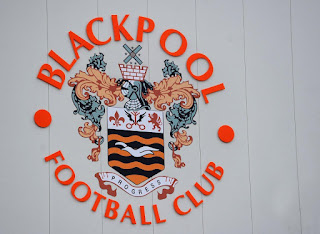 The kids are holed up at the back of the stand with the ‘Singing Section.’ It means I can enjoy the game in peace. Blackpool nearly upset the apple cart in the opening moments. Former Leeds and Southampton defender, Stephen Crainey, plays a give-and-go and thumps a shot that smacks off the upright.

Forest pour forward in an exciting start to the game, Cohen is hauled the ground, with both officials waving away claims for a penalty. The Tricky Trees enjoy a golden spell of possession football, played at a furious pace. Both Cox and the industrious Sharp waste gilt-edged chances.

Sharp gets a second bite of the cherry in the 25th minute, steering a shot into the net following a corner. He peels away to celebrate with the travelling faithful, appearing to take a bite of a supporter’s hot dog. 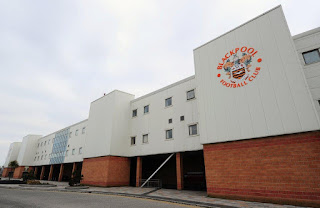 The Seasiders have pace to burn down the wings, with Phillips and Ince keeping Harding and Halford busy. Crosses aren’t converted, often nobody will have a pop at goal, as they overdo the passing. Ince reminds me of his dad, Paul, with his constant bleating and appealing.

I was hoping for a game of bingo at the break. The PA man could shout out to the crowd the numbers. We are treated to 10 minutes of keepy-uppies by the Blackpool Centre of Excellence lads. Paul Hart is wheeled out the Hospitality Suite to perform the half-time draw He receives a standing ovation from both sets of supporters.

Forest replace the out-of-sorts Ayala, who has struggled in possession, with the Irishman, Brendan Moloney. Halford slots in to partner the excellent former Vauxhall Motors and Chester City defender, Danny Collins. The visitors sit back and allow The Tangerines to come onto them. The Tricky Trees appear to be coping. Simon Gillet is ratting, but the front two can’t get on the ball. Holloway throws on Grandin, Dicko and Nathan Delfouneso. They have the pace of the Jamaican relay team and rattle the Reds immediately.

Phillips whips a ball in from the right, Camp’s decision-making is appalling, no-one picks up the runner, and Grandin heads the ball into the roof of the net. Minutes later, Gary Taylor-Fletcher, a player lifted from Leyton Orient Reserves by Keith Alexander many moons ago, scuffs a shot into Camp’s bottom right corner, with the unsighted ‘keeper going down in instalments.

The visiting support is stunned into silence. They’re not asking ‘Campy’ “what’s the score?”, anymore. The Blackpool fans are though. O’Driscoll plays his trump card. Prodigal son Jermaine Jenas enters the field of play. His fifteen minutes of footwork, dazzlery and passing are worth the £25 admission. 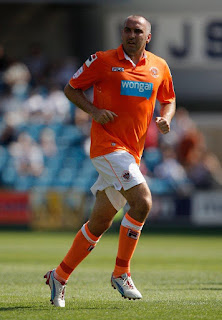 He bamboozles, wrong-foots and leaves the Blackpool midfield for dead. The man is a genius. Camp thumps a clearance downfield, Blackstock flicks it on, only for Billy Sharp to slice horribly wide.

I feel sick to the stomach that Forest won’t take anything from this. Suddenly former Blackpool loanee, Andy Reid, produces some wizardry out on the left, leaving Dexter Blackstock the chance to equalise seconds from time.

There’s utter pandemonium in the away end. I look up towards the back. Sticky jnr is uncontrollable with his wild celebrations. I just hope he hasn’t lost his ‘I am a T**t’ lighter that he bought earlier in the day.

Man of the Match: Danny Collins
Posted by Sticky at 6:15 PM

with the ceefax reference earlier in this entry, I thought you might have mentioned the last recorded goal on ceefax.........Dexter Blackstock against Blackpool.

I really sorry to hear that you friend passed out. It is hard but you have to keep it straight.

Hey! I am actually curious about one thing, of course if that's not too much to ask could you please tell us your place of origin?