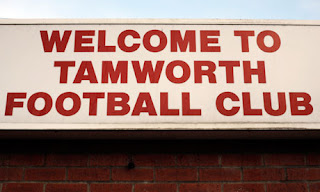 It’s August 2003. I’m sat up in the Hound Road Stand at a sun-kissed Trent Bridge. England and South Africa are locking horns in the third Test. Michael Vaughan’s men have racked up over 440 runs. Proteas captain Graeme Smith is at the wicket. The miserable sod is in invincible form, arriving here on the back of two double centuries.

Smith nurdles, nudges and drives the ball to all four corners of the ground. He looks set. We’re all bevied up and making a killing at the bookies. We place the normal bets of ‘top run scorer’, ‘runs scored in a session’ and ‘how the next wicket will fall.’

I’m sat with my good friend ‘Jam Fool’ who is a top batsman for a local West Indian club. It’s my turn to put the syndicate bet on. ‘Jam Fool’ remarks on how far back Smith is back in his crease. “I reckon he’ll hit his own wicket” remarks ‘Fool’

I scour the bookie’s blackboard. I notice that ‘hit wicket’ is 100/1. I place my £10 bet on the next wicket to fall will be LBW at 2/1. I make the short, booze-fuelled walk back up to the stands. There’s a huge roar. Everyone is dancing, laughing and cheering. Smith is trudging his way back to the pavilion with his head bowed and his bat tucked under his arm. 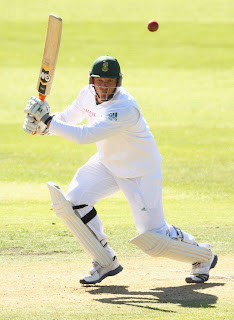 I glance up at the scoreboard it says ‘Smith hit wicket b Flintoff 35. I look up to ‘Jam Fool’ he’s shaking his head and mouthing towards me “I told you so.” I could have won us a grand.

The highlight of the week is a trip down Carlton Town’s Stoke Lane ground. League leaders Grantham Town are the visitors. A 99th minute winner for the Millers’ Josh Thornton is a sweet moment. I can’t hide my dislike for Grantham Town and their bawling bench.

Saturday is same old crazy day. I can’t find Murphy. A furious Mrs P finds him pecking away at a banana in the fruit bowl. I spend the morning at Vernon Park and it’s cultural surroundings in urban Nottingham. ‘The Skipper’s’ team lose narrowly in the afternoon to Dunkirk on the banks of the River Trent.

Brighter news emerges from Keyworth United’s HQ. Sticky junior’s team have won 4-3. I celebrate with a £3.15 pint of Guinness. 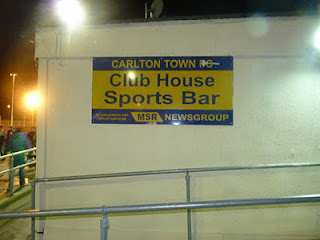 I’ve twice been to The Lamb. The first occasion was against Aldershot a few years ago when Aaron McLean, ex Posh, now of Hull City, proved to be a thorn in their side. The second time was five years ago when Dagenham and Redbridge romped away with the Conference title.

I get a text on the day of the game from Jacko to say he has too many problems with team selection for his midweek reserve game tomorrow evening. Surely none of his pissheads can overlay for an evening kick off?

The Taxman’s car passes a late fitness test at Barn Garage. I hear the honking of the horn. I blow some kisses at Murphy Palmer (budgie) and say cheerio to Mrs P and ‘The Skipper’, who has an early start tomorrow. He’s off on a German exchange trip to the town of Weinsberg.

A revitalised Taxman and his turbo-charged vehicle breeze down Bunny Lane (30mph). The road to Gotham is closed and there are roadworks at Rempstone. We have to detour through East Leake before driving through picturesque Kingston upon-Soar and onto the M42 via Kegworth. 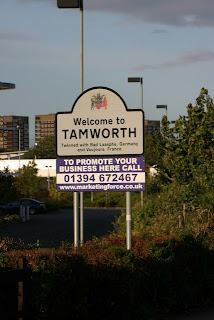 The Taxman is miffed to have missed his art class due to his missus refusing to catch the bus to work. He talks about Nottingham Forest with enthusiasm for the first time in weeks, following their recent renaissance. A DHL freight plane almost comes within touching distance as the pilot prepares for landing at East Midlands Airport.

We cruise down the A5, with its white heathers flourishing in the early spring sunshine. We pass signs for Tamworth Castle and Tamworth Amateur Boxing Club. I don’t know what part they’ve changed on his car but The Taxman has driven like James Hunt. The speedo touched 50mph at one point.

Tamworth is a town in Staffordshire, 14 miles north-east of Birmingham. It has a population of over 70,000. It is home to Tamworth Castle, Moat House and The Snowdome. Drayton Manor Theme Park (who are the Club’s away shirt sponsor) is situated just down the road. It was once home to the Reliant car company and the Scimitar sports car.

The Lambs are managed by former Quorn, Kettering and Barwell manager, Marcus Law. I rate him highly but find his tweets deadly boring. Well known footballers to have played at The Lamb include: Paul Devlin, Gerry Taggart, Steve Walsh, Clint Marcelle, David Oldfield and Paul Merson.

Notable personalities to come from Tamworth or have been brought up in the town include: former Bluenose ‘keeper Tony Coton, Swansea City defender Ashley Williams and Teardrop Explodes frontman Julian Cope. 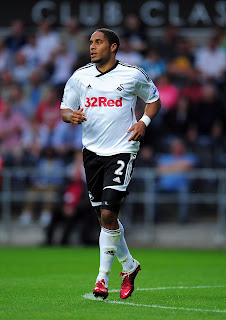 Grimsby is a seaport in the Humber Estuary in Lincolnshire, with a population approaching 90,000. Notable alumni from Grimsby include: Some Mothers Do Ave Em actress Michelle Dotrice, Nottinghamshire fast bowler Darren Pattinson, former Nottingham Forest and Leeds United striker Duncan McKenzie and the snooker players Dean Reynolds and Mike Hallett.

We’re parked up at the ground 25 minutes before kick-off. I buy a glossy covered programme for £2.50 and a bottle of king-sized Tango for £1.20. The programme has 23 pages of adverts, but to be fair it’s a decent read for the neutral.

We take a pew on red tip-up seats in the Main Stand. The guy on the gate has already said the place is stacked out with scouts. Liam ‘The Hitman’ Hearn’ is in town. He has found the back of the onion bag on twenty six occasions this season. He looks a snip at £60,000 from Alfreton Town. I have banged on about the Nottingham-born striker on this blog for a few seasons now.

The sun is hanging around as the temperature begins to dip slightly. I love this 78 year old ground. It’s painted red, with an open end behind one goal close to the Clubhouse, with deep concrete steps. The other three sides are covered. Grimsby’s 263fans congregate behind the far goal. It’s admirable and commendable that they should make the 260 mile round trip with only a play-off spot up for grabs and on a school night too. 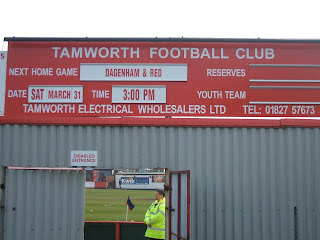 The DJ plays some random toons. The Killers, Cee Lo Green and Murphy’s favourite, Rihanna are the pick of the bunch. ‘Fanfare for the Common Man’ is the final track before the players emerge from the tunnel tucked away in the far corner.

I notice Kidderminster Harriers’ manager Steve Burr snuck into the ground as 34 year old Loughborough born official Amy Fearn blows her whistle. The sloping pitch looks tight and narrow. I think Murphy Palmer has more room to play footy on our dining room table than the players have here.

Tamworth are neat and tidy; they have an abundance of left footers who are pleasing on the eye. Former Nottingham Forest youth team players Richard Tait and Danny Thomas are amongst their ranks.

Hearn looks hungry. His first touch is deft and his movement electric. He drags the clumsy-looking Tamworth central defenders into wider areas.

The moment I have dreaded arrives on the half hour. The excellent Amy Fearn awards Grimsby a hotly disputed free kick. A guy four rows back shouts out: “You’d be better off at home washing the dishes love.” Not one person laughs. The lady behind me is spitting more feathers than Murphy Palmer.

Hearn has a couple of half chances before a marauding run by Grimsby’s Michael Townsend ends with a shot flashing past the right hand post. Both keepers are kept busy in an entertaining first half with Tamworth more than matching promotion-chasing Grimsby. 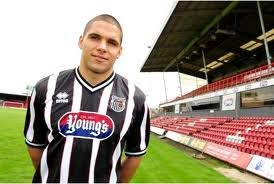 Tweets and texts are flying in from mates at the break predicting a 0-0. Regulars know that Sticky doesn’t do shut-outs. Ironically both NFFC and Lincoln City are goalless in vital relegation games at Leicester & Hayes and Yeading respectively.

I expect Grimsby to press on and they do. Hearn conjures a chance up from nothing but his effort comes back off the post. The visitors open the scoring minutes later, with Hearn flicking home from an Ian Miller header.

Tamworth roll up their sleeves and are soon on level terms with a goal from substitute Connor Taylor, following fine work by Tait down the right.

There’s a grandstand finish with chances at either end. A draw is about right, but I’m really impressed with Tamworth. They certainly play the better football and are less direct than Grimsby.

Man of the Match: Richard Tait