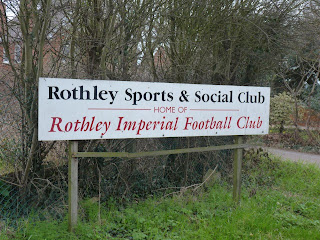 It’s Monday September 25th 1995. I’m laid out on the settee having a power nap whilst Mrs P is rustling up some tea in the kitchen. I’ve the hangover from hell after a 50th birthday bash and also Europe winning the Ryder Cup yesterday.

The landline rings out wakening me from my slumber. A bleary-eyed Sticky makes his way over to the phone. It’s my Dad, he doesn’t sound himself. I can barely hear his words. Mum has collapsed outside a shop in our village. He’s ringing from the Queens Medical Centre in Nottingham where she has been rushed in by ambulance.

I drop everything and race up the ring road. My heart is pounding and tears are streaming down my face. What has happened to Mum? We sit in a waiting room for what seems an age. A doctor finally enters the room. He gently and compassionately informs us of her condition. It seems like Mum may have suffered an aneurysm. She is being kept alive by a ventilator. Dad sits beside her and holds her for the final time as the machine is switched off. She was only 55 years old.

My brother doesn’t quite make it to the hospital in time as he fights his way through the rush-hour traffic. We are all in total, utter shock. We are given Mum’s belongings and head off home to Dad’s. He pours my brother and I a large 25 year old malt whisky. I light up my final ever cigarette, vowing to kick the habit tomorrow. My wife is eight months pregnant. Mum will never get to see ‘Our Jack’

Tomorrow (Sunday) is Mother’s Day. I’ll take that sad, lonely, agonising walk for the seventeenth year in a row up to our local cemetery to lay some flowers on Mum and Dad’s grave. I miss them both so much. 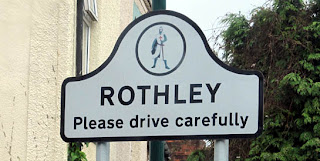 There’s a pleasant beginning to the weekend, with a few cans of Stella and a couple of glasses of red wine accompanied by a plate full of paella. Channel 4 is having a comedy night. The Bank Job hosted by the talentless George Lamb drives me to an early bed.

A huge day lies ahead for me on Saturday, starting with that bloody paper round again. Where is that lazy sod Sticky jnr? Murphy Palmer collides with the venetian blinds whilst I plough my way through a bacon cob. The little fellow dust himself down and returns to his cage.

I head out to inner city Nottingham. I spotted a lad who could catch pigeons the other day. He doesn’t disappoint and books himself a six week trial starting on Monday. 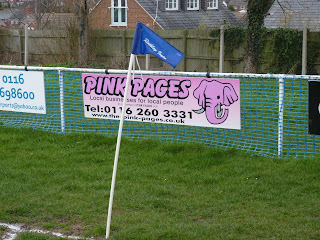 I dash back to Keyworth as ‘The Skipper’ has an important League fixture. It’s an eventful start. We have two goals scrubbed off for offside and find ourselves 2-0 down. After a spirited second half performance we finally pull off a 5-2 victory.

I congratulate the lads, jump into the Rolls Royce and drive out towards Leicestershire. I foolishly ignore Sat Nav, opting instead to drive through Barrow upon-Soar and onto the A6. I listen to the closing moments of Everton v Sunderland in the FA Cup quarter finals. I take an exit too early on one of the roundabouts and find myself driving in the wrong direction down the A46. I am, readers, a blithering idiot.

I finally reach Rothley. It’s already 3.05pm. I can’t find the flipping ground. A couple are pushing a pram down the main drag. They very kindly point me in the right direction. I pass the Bowls Club and a children’s nursery, before parking up. Admission is free and no programme is issued. 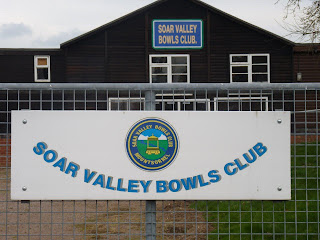 Rothley is a village in the borough of Charnwood in Leicestershire, with a population of just over 3500. It is the home to the Great Central Railway which has been used for the film Buster and the TV series Miss Marple.

The village is one of the most affluent places in the county. The Ridgeway was identified in The Sunday Times as the most expensive place to live in the East Midlands. In 1988 the then England cricket captain Mike Gatting was sacked following newspaper stories of alleged shenanigans with a member of staff at the Rothley Court Hotel.

In 2007 three year old Madeleine McCann, who lived in Rothley, disappeared from a Mark Warner holiday apartment in Portugal. Her parents Kate and Gerry still live in the village. 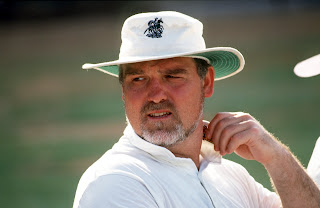 As I enter the ground the Social Club is to the right. It would be fair to say the place is a little run-down. The dug outs are to the near side of the ground. I traipse along the hard standing pathway. The ground is really high up. It would be an interesting spectacle on a windy day.

Trees are behind one end with some junior pitches and wasteland on the far side. I walk past an electrical cable, an oil drum, a wheelchair and some slabs. There’s a mound to the far side where somebody has fly-tipped a sofa. Housing is situated behind the other goal (I am later told by Davina that this was once a Rolls Royce works).

It’s pretty much a local derby. A spectator tells me all the players know one another – you wouldn’t have thought so as they persist in kicking seven bells out of each other. One Thurmaston player is carried off; his replacement is soon limping towards the dugout. 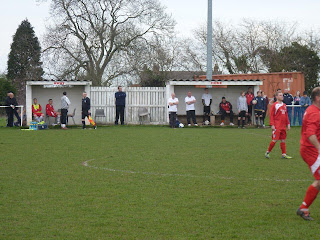 I remain unimpressed at the standard of football in this League. There is no RESPECT for the referee or officials. Both teams are brilliant at swearing. I’ve had a good old chat with the baby-faced referee’s assistant. He’s only 18 years old and is from Essex. He’s studying at the University of Leicester. He’s a Level 6 referee.

Rothley take lead. The ball is crossed in from the right to ‘Harty’ who is lurking on the edge of the box, he takes a touch and thumps a shot into the bottom right hand corner past a wrong-footed ‘Paddy Kenny.’

I’m stood adjacent to the Social Club. The young couple pushing the pram have rocked up. He asks if I’m Sticky Palms. I’m gobsmacked. He’s read my blog for a while and had noticed I was due at Rothley today. I can’t believe that out of 30 folk here today someone knows me. 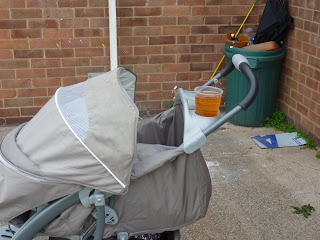 I chat at length to Alan and Davina. They have a built-in pint compartment on the pram. Davina hasn’t had drink in a while as the baby is only five weeks old. They are making up for it this afternoon, downing a couple of Newcastle Browns and ciders.

Alan has given up his Arsenal season ticket after Stan Kroenke banged on another £100 per year. No stellar signings and a baby on the way made it an easy decision for him. Alan also follows Woodford United who I saw play earlier in the season. 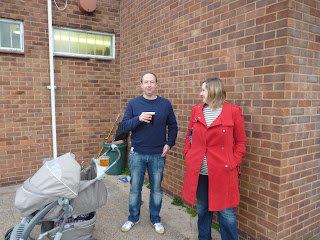 The second half is God damn awful. I spend more time socialising with the charming Alan and Davina. Thurmaston come into the game more and start playing some football but they just don’t want it enough. They need to throw some more bodies forward.

With thirty seconds remaining a ball is clipped in from the right, it’s headed towards goal but somehow scrambled off the line by a relieved home defender. The final whistle blows, Rothley retain top spot in the League.

Man of the Match: Alan and Davina
Posted by Sticky at 5:37 PM

I really like when my birthday match a great event. I can party double because I have the reason to do it.